Whether you’re a believer or not, America’s towns are filled with spooky stories passed down through time. In cities across the United States, you can find haunted fortresses and jails, graveyards and even bathrooms with creepy and chilling stories. We’ve tracked down some of the most haunted places in America, where lingering spirits roam through the halls of hotels, and even on a Hollywood soundstage.

Discover America’s most haunted places and learn about the eerie spirits that linger about our historic nation. Read on to learn about the country’s most chilling ghost stories. Each of the below-haunted locations leads to a more in-depth article about their ghosts and hauntings. So, don’t be afraid to click through whenever you see orange below.

TABLE OF CONTENTS show
The 10 Most Haunted Places in America
1. The 52 Most Haunted Places in Oahu
2. The 52 Supernatural Places on Hawaii Island
3. Haunted Hollywood
4. The Most Haunted House in America: The Whaley House
5. The 13 Haunts of San Diego
6. Legends and Spirits lurking around Plymouth, Massachusetts
7. The Ghosts of New York
8. Ghosts in the Windy City
9. One Scary Day in Charleston
10. The Stanley Hotel – Estes Park, Colorado
Read About More Haunted Locations in the U.S.

The 10 Most Haunted Places in America

1. The 52 Most Haunted Places in Oahu

The 52 Most Haunted Places in Oahu! The 52 most spooky, supernatural and haunted places in Oahu. The stories and urban legends behind Hawaii’s scariest and creepiest places.  Click through if you dare!

2. The 52 Supernatural Places on Hawaii Island

Night Marchers are ghostly apparitions of a band of beings who move with purpose to the beat of pounding drums. Some say they are armed spirit warriors marching to or from battle, carrying ancestral weaponry and clothed in decorated helmets and cloaks. Click to learn more about the legend of the Night Marchers and 51 additional supernatural places on Hawaii Island.

There are three incredibly haunted locations in Hollywood. You may not realize that Paramount Studios and the Hollywood Forever Cemetary are next to each other. It is said that night watchmen at Paramount Studios refuse to walk down New York Street, a real-life mock-up of New York City streets for fear of seeing a strange man run right through the walls, crossing over into Hollywood Forever Cemetery. Check out more of these spooky haunted Hollywood locations for a perfect haunted day in Hollywood.

4. The Most Haunted House in America: The Whaley House

San Diego isn’t all sunshine and beachy fun. San Diego is also a city that has many haunted locations with unexplained paranormal activity. Check out this great list of the Most Haunted Places in San Diego. 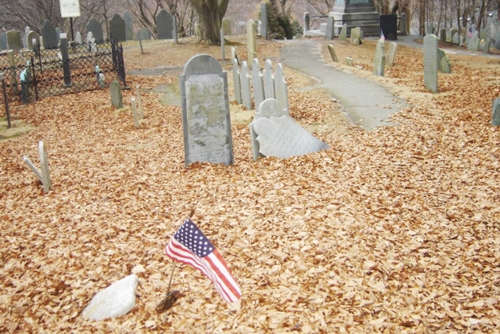 Looking for a list of the most haunted places in Plymouth, MA?  Want to know the ghostly history of America’s hometown? Whether you are a serious ghost-hunter, a non-believer or just out to hear some history and have some fun, Dead of Night Ghost Tours is a great way to spend an evening in Plymouth. Click here to learn how you can spend a perfectly eerie evening visiting the Haunted Places in America’s Hometown.

7. The Ghosts of New York

Over three hundred years old, Manhattan is one of our country’s older cities, and unsurprisingly, has a long history of ghosts and hauntings to match. In the city that never sleeps, you might run into the ghosts of Aaron Burr, Eleanor Roosevelt, Bob Fosse, George M. Cohan, or a showgirl with unfinished business. Want more? Click here to learn about the most haunted places in New York City.

8. Ghosts in the Windy City

From the massacre at Fort Dearborn in 1812 to the famous gangsters of the Prohibition, Chicago is a city steeped in history—and not all of it is savory. Every neighborhood has its scary stories and sordid histories, and there’s no better time to explore the seamier side of Chicago’s past than on a blustery fall day as Halloween approaches.  Come check out the dark side of this Chicago. From tragic accidents to bone-chilling killers, there is more to Chicago than meets the eye—if you’re brave enough to look.

9. One Scary Day in Charleston

By now, you must have visions of ghosts on your mind. If you want the opportunity to learn more about the paranormal, and maybe even catch a glimpse of a ghoul or two Charleston is the city to visit! Situated halfway between Myrtle Beach and Hilton Head Island, Charleston is famous for polite manners, great down-home cooking, and exquisite nineteenth-century homes. But it is also known as a hotbed of paranormal activity. The Old City Jail, which housed some of Charleston’s most infamous criminals, 19th-century pirates, and Civil War prisoners is just one piece of a truly scary day in Charleston.

The Stanley Hotel in Estes Park, Colorado has been featured as one of America’s most haunted hotels and continues to operate since its opening day in 1909. There have been many unsettling paranormal experiences that have happened over the years at the Stanley but the most memorable story lies with the famous author, Stephen King.

The story goes as such, the hotel was getting ready to close for the winter season since it did not have heat in the hotel but Stephen King and his family showed up unexpectedly, thus they were the only guests that night and given room #217. While King was walking the halls of the hotel he claimed to have witnessed a ghostlike image of a woman that “chilled him to the bone.”

The ghost was said to be of a former maid to the hotel who experienced a freak accident years before. The hotel had lost power due to a storm and the maid was sent to light the lamps, what she didn’t realize was the gas leak in the room she was in.

When she opened the door the flame ignited the gas and sent her through the floor into a room the story below, room 217 where King and his family were staying. She survived the ordeal but her ghost is said to haunt the hotel today.

Because of his stay and experience, the Stanley Hotel was Stephen King’s inspiration for his novel, turned film, The Shining.

Read About More Haunted Locations in the U.S.