13 Most Haunted Places in San Diego 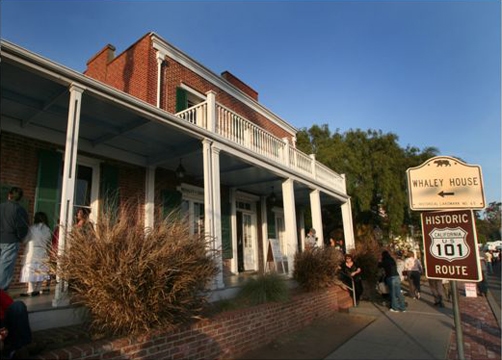 San Diego is known for its amazing coastline, sunshine, an average temperature of 72 degrees and little rainfall. Of course, not all of San Diego is warm. Some of the “hottest” spots are the chilliest! What most people do not realize is San Diego is one of the most haunted cities in America. So get ready because today we visit the 13 Most Haunted Places in San Diego. Up first, is the San Diego Whaley House, which is said to be the most haunted house in America!

The 13 Haunts of San Diego

13 Most Haunted Places in San Diego

Begin your day in Old Town where you will explore a multitude of supposedly haunted locations including your first stop at the Whaley House. Listed by the United States Department of Commerce as an authentic haunted house, it was built on the site of early San Diego’s public gallows. It is home to numerous deaths, angry confrontations, several ghosts and unexplained phenomena. The ghost of Thomas Whaley has been reported to be seen on the second-floor landing, dressed in a black frock coat and a wide-brimmed hat.

A short walk from the Whaley House is the Roman Catholic El Campo Santo Cemetery that dates back to 1849. In 1889 a horse-drawn streetcar line was built through part of the cemetery, which later became San Diego Avenue. In 1942 it was finally paved over, leaving 18 graves under the street and sidewalk. Spirits observed here are often mistaken for park employees that dress up in period costume. People who leave their cars parked in front of the cemetery on top of the many graves often find them hard to start afterward. You may want to take the trolley instead! 477 bodies were buried at this cemetery, but it seems that their spirits have strayed outside their walls.

Next on the list of haunted Old Town spots is The Robinson-Rose House: a replica of the house originally built in 1853. The building is currently used as the Visitor Center for San Diego’s Old Town Historic Park. It also said to house the ghost of at least one of the original residents. Constructed on the foundation of the original house, one of the chief phenomena in this house is the unpredictable nature of the electricity. Electric lights flicker and go on and off on their own! No electrician has ever found anything wrong with the wiring or lights. Well, except that they turn on and off on their own…

La Casa de Estudillo is an adobe home built in 1827. It was restored in 1910 for the commander of the Presidio, Captain José Maria Estudillo. Father Antonio Ubach was a priest living there at the time. He is said to live on as one of the ghosts of La Casa. In the dark chapel a chill has been felt as a ghostly figure covered in a brown robe is seen gliding into the priest’s bedroom. Pages of a book turn by themselves and the faint sound of prayers can be heard.

For those looking for more than just “good eats” head to close by El Fandango Restaurant for lunch. It was built on the site of the Machado home that was destroyed by fire in 1858. Over the years, a billiard saloon, a bakery and then a residence were built on this spot. The ghost that is seen here is that of a Victorian woman dressed in white drifting or floating through the building. Sometimes she has been known to pass through walls and closed doors and seems to be unaware of those who encounter her.

Next, head out of Old Town to the Star of India. You will need to drive or for fun catch the trolley to this location. Located near the San Diego International Airport, the Star of India-built in 1863 in the Isle of Man-is the world’s oldest active iron-hull sailing ship. Life aboard any ship is dangerous, and the Star of India has had her share of misfortunes. Ghosts of several unfortunate sailors and passengers are said to still remain aboard the ship.

One story dates back to 1884 when a young stowaway still in his teens by the name of John Campbell was discovered and put to work. Soon after, Campbell lost his footing high in the rigging and fell 100 feet to the deck. His legs were crushed. Three days later he died and was buried at sea. Visitors to this ship sometimes report feeling a chilled hand touching them when close to the mast where Campbell fell. Or is it Campbell himself?

For those bold and gutsy individuals who dare to continue on this spirited day, head to the Gaslamp Quarter to visit the William Heath Davis House. Constructed by Davis in 1850, the house remains the oldest structure in what is now downtown San Diego. The spirit of an unknown Victorian woman has been reported to still reside there today.

In 1977 a San Diego newspaper article featured interviews with the occupants of the house. They reported stories of the lights going on and off by themselves. What’s so unusual about this story is that the house was not wired for electricity until 1988. The lights that went on and off were either gas or coal oil lamp flames–requiring a match to light! Even now, the house continues to have unexplained events related to its lighting. Officials of the Gaslamp Quarter Historical Foundation report the electric lights turning on without human help.

Off the beaten path is The Point Loma Lighthouse. Perched on a windy finger of land, the lighthouse overlooks the Pacific Ocean on one side, and San Diego Bay on the other. Built in 1855, it was abandoned before the turn of the century. It has been vacant for over 100 years–but don’t think it isn’t occupied! On the first floor, everything appears normal. But all is not what it seems. Former lighthouse keeper Robert Israel is not seen, but is heard at times. Along with the ghost of Robert Israel, there is no doubt many more who seek out the lighthouse as a beacon to happier times.

If you are visiting in October you can end the evening with a fun but equally intense haunting such as The Haunted Hotel at 424 Market St. and the Frightmare on Market Street at 530 Market (corner of Sixth and Market). These two innocent-looking, old buildings in the Gaslamp Quarter are transformed every year into walk-through horror house screamfests. The two buildings are down the block from each other. Both haunted houses feature spooky special effects and live action rooms that are disturbingly surreal. Get ready to get lost in Frightmare’s Victorian freakout with trap doors galore and monsters that stand toe to toe with you while screaming in your face! Not recommended for the little ghouls and boys!

If you want to extend your haunted day into an even spookier night, San Diego has no shortage of great hotels to stay in. Among them is one of the largest wooden buildings in the United States, the Hotel Del Coronado. Located in Coronado it is one of the most picturesque hotels in the world and one of San Diego’s most popular tourist attractions. But before you book a room you may want to read on…

Affectionately nicknamed Hotel Del, this grand hotel has a history of tragedy. Before 1900, two women had separately committed suicide, each taking with them the life of an unborn child. Story has it that the women’s ghosts have never really checked out.

The first story revolves around Room 502 (now 3502) was rumored to be the love nest of hotel builder and owner E. S. Babcock. The ill-fated mistress staying in this room took her own life soon after learning she was with child. Today, lights sometimes flicker in the room, and outside the door, a chill may be felt.

The next tale dates back to Thanksgiving 1892 when a pregnant Kate Morgan checked herself into the hotel under the name of Lottie Anderson Bernard. She spent 5 lonely nights in room 312 anxiously waiting for her wayward husband to join her. (The room number later changed to 3312, and recently to 3327). Her body and a handgun were found near the steps leading to the beach.

Another hotel with a haunting is the Horton Grand Hotel. This Victorian hotel was lovingly reconstructed on the former site of Ida Bailey’s “cat house” in the heart of the Gaslamp’s historic red light district. At the time, a favorite haunt of Wyatt Earp, the hotel is now the supposed haunting ground of the ghost of a mid-1800’s gambler by the name of Roger A. Whittaker. Roger who was caught cheating in a game of cards.

He tried to hide in an armoire in his hotel room–room number 309. Unfortunately, he was soon found and shot to death by an angry gunman. There have been many reports of the bed shaking, lights going on and off by themselves, objects moved by unseen hands, and armoire doors opening in the middle of the night. The temperature of the room sometimes gets uncomfortably warm, even for San Diego! Even air-conditioning and open windows don’t help. Every room in the Horton Grand Hotel has a bedside diary for guests to memorialize their stay. For those brave enough to have stayed in room 309 the diary includes recounts of ghostly encounters. Maybe you will be the next one to enter your experiences in that journal?

San Diego’s frightening history has not scared anyone away so far. With one of the most amazing coastlines in all of the country, very few cities in the U.S. can match the scenic views, beaches and weather San Diegans enjoy every day!

Helpful Hint: Please note that most of these homes and locations are open to public at little or no cost. Be sure to call in advance for more specific information on the tours and hours and days they are open.

Another Haunted tour option is the Gaslamp Quarter Tour and more information is available by calling 619-233-4692 or visiting their website http://www.gaslampquarter.org/tours/ 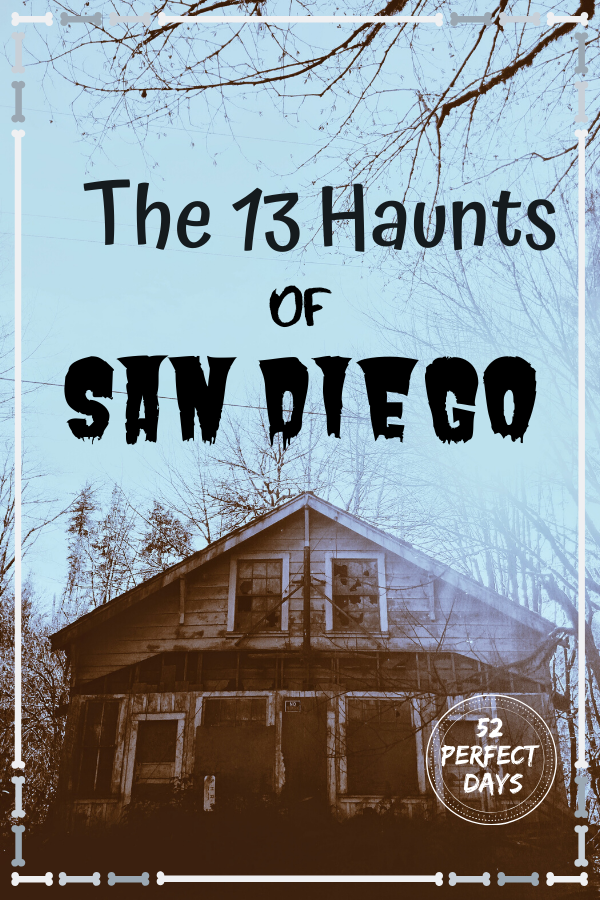 Sabrina S. Siracusa is a freelance copywriter & translator from sunny Southern California. She writes under pen name Writergirl. She is an experienced copywriter specializing in creative, persuasive web content. She is a graduate of San Francisco State University & UCSD. When she is not writing or reading she is cruising new & cool places in Southern California. Check out her website at www.writergirl.biz.

About the Author Sabrina S. Siracusa

Sabrina S. Siracusa is a freelance copywriter & translator from sunny Southern California. She writes under pen name Writergirl. She is an experienced copywriter specializing in creative, persuasive web content. She is a graduate of San Francisco State University & UCSD. When she is not writing or reading she is cruising new & cool places in Southern California. Check out her website at www.writergirl.biz.