In a town, as steeped in antiquity as Plymouth, Massachusetts, one should not be surprised to find a fair share of legends and old spirits lurking about. Native Americans lived on this land for thousands of years before the Pilgrims’ arrival, and centuries of their respective descendants, as well as new settlers to the area, have left behind a trove of stories – some sad, some scandalous, some scary – of hauntings, hexes, and history. So, why not explore some of the Plymouth ghost tours and learn about haunted Massachusetts.

For a perfectly eerie evening head to the town’s best-known landmark, Plymouth Rock, located in a massive portico at the ocean’s edge on Water Street for a Dead of Night Ghost Tours. 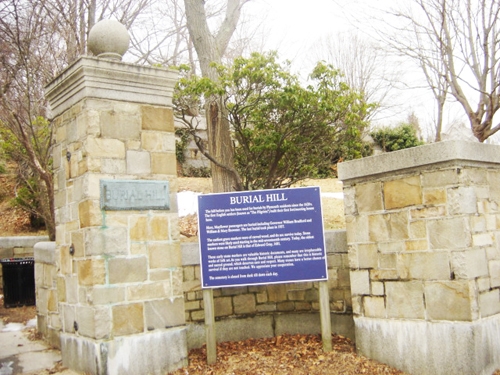 The conception of the company is almost as spooky as the tours themselves. On the night of October 1, 2002, Jan Williams dreamed of her best friend’s mother, a woman with whom she had been very close – a woman who had passed away a decade earlier. In the dream, the woman was speaking directly to Jan, telling her to “look for ghosts.” It was vivid, almost concrete: “When I woke up, I could smell her perfume,” Jan says. “It was really like she had been in the room, talking to me.”

The dream repeated itself every night for weeks, waking Jan up at 3:02 A.M. each time. Jan had had a “lifelong” belief in ghosts but was not sure exactly what she was dealing with or what to do with the message her friend’s mother was giving her. “I am not a businessperson or a public speaker,” she confesses. “But I felt that this dream was giving me a direction.” In early December, Jan took a day trip to Salem, Massachusetts – another old town full of history and even more closely identified with the supernatural — and stumbled upon inspiration. “There was a company there taking people on tours of haunted sites and sharing the local lore,” Jan learned. “And I knew then that my friend’s mother was telling me to start doing ghost tours in Plymouth.”

Thus the birth of Dead of Night Ghost Tours, which Jan and her little dog, Boo, who is her co-host have been leading for six years now. “Boo is very tuned in and often alerts us to the presence of spirits as we walk along,” Jan credits her canine.

Tours, like the twilight lantern ghost tour, attract a mixed crowd – some staunch believers, some skeptics – but each journey begins by the guide asking all participants to “leave their mortal bodies behind, enter the spirit world and be open to all that is going on around you” as they walk up the granite steps to Cole’s Hill, where a sarcophagus containing the bones of the Mayflower settlers sits.

“I tell everyone on the tour to be aware of all their senses, especially smell. Frequently, ghosts and spirits are smelled rather than seen or heard. The scent of tobacco when no one nearby is smoking a pipe, or the sudden fragrance of flowers in the winter is often indicative of spirit activity,” according to Jan. “The sense of touch is important, too. A feeling of a cold spot in the air, or a tap on your shoulder when no one’s behind you — those are things our participants report a lot. We carry lanterns,” Jan says of the evening walks through Plymouth Center, “And I advise flash photography – the infrared light picks up spirits’ energy.”

The ninety-minute walking tour of downtown Plymouth takes tour goers to see a building on Leyden Street, which had past lives as a stagecoach station and a textile mill, purportedly now home to the ghost of a young boy. Then it’s up to Town Square, where the trophy head of Wampanoag King Philip (also known as Metacom, son of Massasoit) was gruesomely displayed on a stake for years following his death in 1676 at the hands of a British militia during King Philip’s War. Philip is said to haunt the spot, and a number of fires, accidents and weather-related disasters have taken place there in the centuries following. Coincidence or curse?

Also located in Town Square is Jan’s favorite place on the tour, Plymouth’s 1749 Courthouse. Its cellar has been used as a jail and a morgue and people report hearing the sounds of bodies being dragged across the floor, as well as a phantom hair-puller.

Up another steep stone staircase is Burial Hill, Plymouth’s ancient, seven-acre cemetery, which is 165 feet above sea level and affords daytime views of Provincetown. Before its use as a graveyard, it was where the Pilgrims’ first fort was built. There are 2,150 tombstones here and Jan, who has become quite well versed in the funeral rites and rituals of our Puritan forefathers explains the meanings of the symbols carved on the tombstones. She will point out several with elaborate verses engraved on their worn surfaces, as well those belonging to notable early Plymoutheans like Governor William Bradford and Thomas Faunce.

Not all the ghosts in America’s Hometown are old ones. On Main Street, in what is now a sprawling antiques shop, Woolworth’s 5-and-10 reigned until the late 1970s. The building is said to be haunted by the last manager of the store, who hung himself on the property.

On North Street, called “the most haunted street in America” by some paranormal investigators, the Spooner House (whose resident ghost is a young girl named Abigail Townsend and an abscess tooth caused her demise) and the Taylor Trask Museum (where a wicker baby pram moves by an unseen force and a lady in white gazes out a window, pining for her sea captain husband) make up the final stops on the walk.

If all that walking and suspense leaves you hungry and thirsty, Sam Diego’s Mexican Cookery and Bar on Main Street is a spirited place to fill your belly and trade ghost stories with your friends. This sprawling, two-story restaurant happens to be home to Plymouth’s most popular ghost. The building was a fire station until the 1970s and is said to be haunted by the friendly ghost of a firefighter who died in the line of duty. Ask your waitperson; chances are he or she has seen the ghost in person or can point out another Sam Diego’s employee who has. And the fajitas are…pardon the pun…to die for!

Whether you are a serious ghost-hunter, a non-believer or just out to hear some history and have some fun, Dead of Night Ghost Tours is a great way to spend an evening in Plymouth. Wear comfortable shoes and bring your bravery!

Pin it for later!

Norma Walsh was born, raised, and educated in Boston. She is a freelance writer who has lived in Plymouth since 1999.