When I think of the many great TV shows from my childhood, one thing comes to mind – great opening sequences. Who can forget Magnum P.I.’s Ferrari roaring off onto the highway, or the cool brown and orange two-seat helicopter soaring in and around the volcanic mountains of Hawaii. Of course, we can’t mention Magnum P.I. without conjuring thoughts of Hawaii…Five-O that is, with the thundering waves and hula-dancers.

For me though, there was one show that really stood out. I will give you some hints in the order they are shown in the opening sequence: Palm Trees, Pink Flamingos (guessed it already?), a windsurfer cruising across open water, scantily clad bikini top (bouncing), jai-alai players, ocean rushing underneath (ahem, starring Don Johnson,), horses leaving the starting gate, front grilles of lined-up Bentley’s, oceanfront condo’s, parrots, Greyhound racing, downtown Miami cityscape, for lack of a better term – booties in bikini’s, and finally, speedboats cruising toward a cruise ship. That’s right – 80’s TV at its best…Miami Vice.

Now, what if I told you that it’s possible to personally experience the entire opening sequence of Miami Vice in two perfect days? Believe it baby, because you are about to put on white loafers without socks and kick it Vice-style!

I’m going to layout the day geographically to maximize time (rather than following the opening sequence), so we’ll start around 10AM with a quick trip to Miami Seaquarium. To reach the Seaquarium you’ll travel over the scenic Rickenbacker Causeway, past many Palm trees and plenty of hot bods in bikinis as they windsurf, kitesurf or sail Hobie Cats on the shallow waters of Biscayne Bay. 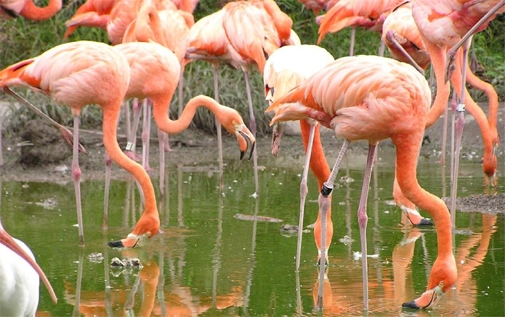 The main reason to visit the Seaquarium (from Miami Vice tour perspective) is to view the famed Pink Flamingos and colorful parrots, but you can also see Flipper’s grandchildren perform (bonus) and many other interesting sea-creatures like Tarpon fish, rescued Manatee’s and Edward James Olmos (kidding, Lieutenant…sorry).

Next, we head over to Thriller Boat Tours at Bayside Marketplace for the real thrill of ocean waves rushing underneath at high-speed as you breathe and taste the salt-air, passing cruise ships, South Beach and the houses of the rich and famous along the intercostal islands between Miami and South Beach. The Thriller is a large catamaran-hulled speedboat that reaches speeds around 25-30MPH during the tour, which when on the water feels quite fast and is worthy of being dubbed “Tubbs-esque.” The route you’ll take covers both the TV show and many parts of the movie re-make. 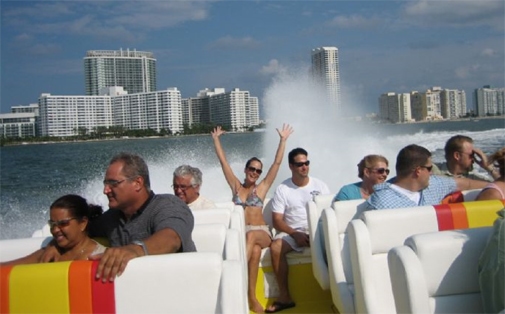 The easiest, least-expensive (free) and most authentic way to take in the cityscape, including the building with a cool hole in it shown at the tail-end of the opening, is to take the Metromover. You can catch the Metromover a couple of blocks away from Bayside Marketplace. The Metromover is sort of a like an “elevated automated bus line on rails” and will cover all of the downtown portions of the TV show.

Be warned though – it’s free, so there can be some interesting characters riding along (but nothing you wouldn’t see in NYC and it’s highly monitored by security and cameras and ridden constantly by commuters and visitors alike). Take the Brickell Loop to see the buildings from the TV show, including the Bank of America building that is also featured in the movie remake. It will loop all the way around to where you started, so just make note of the station where you got on.

For the ambitious, there is still time to take in a game of jai-alai (pronounced high-a-lie, it’s the guys in the TV show with the weird wicker basket sticks throwing the ball around). Jai-alai is proclaimed to be the “world’s fastest ball-game” and is similar to handball but in a much larger court, with the ball traveling at speeds up to 180 MPH and occasionally ending a players career early.

It’s an interesting game, with its tradition going back to the Basque region of Spain, where it was first played in church courtyards during celebrations. Now it’s very much a central part of the gambling scene, as bets are placed similar to horseracing.

The arena is about a twelve-minute drive from downtown, and on Friday and Saturday nights, I suggest catching a bite to eat while viewing the 7 PM game from the court-view clubhouse seats. The most expensive seats in the arena only cost $2.00, leaving you with some money to play the odds. That ends day one of the tour with enough time to take in the South Beach nightlife, where Bentley grilles (and Hip-Hop Grillz alike if that’s your thing) can be found.

In day one we didn’t cover two things – horse and greyhound racing, and both are available if you truly want to check off the entire list and say “I did it” in day two. Gulfstream Park in Hallandale, about 20 minutes away from Miami, has a beautiful track and occasionally concerts featuring famous groups from the 80’s that are still around (think REO Speedwagon and Blondie), lending well to our Miami Vice theme.

For dog racing, the track at Flagler Greyhound Racing and Poker is actually in close proximity to the Jai-Alai arena and could potentially be squeezed into day one. Completing day two of your mission (should you accept it) will garner you bragging rights and potentially some Miami Vice-style bling if you place your bets correctly.

Joe Teskie is a freelance internet development and marketing consultant by day, and moonlights as a DJ, percussionist and freelance writer by night. He has traveled extensively in Asia and the United States as well as the Dominican Republic, Mexico and Colombia, and has lived in WI, TN, CA, Japan, MD, VA, NYC, and now Miami, FL. A self-proclaimed “foodie”, Joe has had the pleasure of “insider-tip” eating at many of the world's best eateries (both expensive and in back alley’s alike).