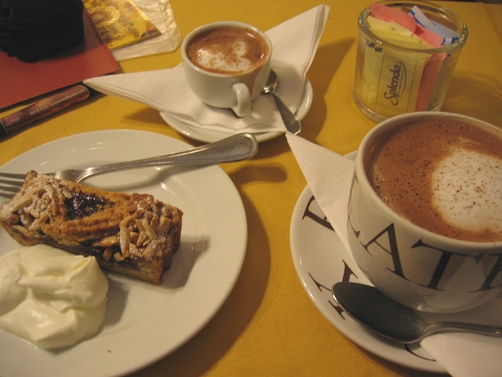 Some might say that a city is only as cool as its coffee shops. If that’s the case, Boston is one cool city with a coffee-house culture as varied as the neighborhoods that make up the historic metropolis.

Here’s a local guide to the best places to grab a mug (or bring your own). Be forewarned: I’ve purposely left out Starbucks and Dunkin’ Donuts-because you can find them on every corner. But unlike our independent booksellers, many of which have shut their doors over the past few years, our independent and small-chain java spots are still plentiful in Boston. So abundant, in fact, that I’m starting to wonder if the “Beantown” nickname refers to coffee beans.

There’s no better neighborhood to begin this exploration than the fashionable Back Bay.
Newbury Street may be an upscale scene, but Espresso Royale is just a homey, unpretentious coffee house with a green conscience that appeals to Berklee students, bike messengers, and 9-to-5ers who pop in for their morning cup. Their team behind the counter constructs amazing bagel sandwiches with names like the Chia Pet and Tequila Sunrise, and they’ve got an impressive array of herbal teas on offer, including the multi-floral Wu Wei.

It’s not often you find a combo-shop that does both parts of the business well, but nearby Trident’s half-café/half-bookstore set-up works like a charm. Grab an indy magazine from the racks, a copy of the Paris Review, or a book of poetry, and settle in at the counter, where they’ll bring you a steaming cup of coffee, or, if you prefer, a smoothie made with fresh fruit and a shot of wheat germ.

The denizens at OtherSide Café, just across Mass Avenue from Urban Outfitters, are hipsters and art students. But stay long enough and you’ll notice the occasional toddler or three-piece suit as well. Known for its vegan, raw food and vegetarian specialties, the OtherSide also features an impressive selection of imported beers. But if coffee is what you’ve come for, they’ve got it-and the friendly staff will serve it to you with a slice of sweet potato or strawberry-rhubarb pie. Bring your own mug, and they’ll fill it for free. Once a week, movies show on a screen above the bar, and the sunny outside patio is a great place to relax before an afternoon game at Fenway.

Head south to find Flour on Washington Street in the heart of the South End. Local chef-celeb Joanne Chang opened this bakery/café to much applause, and with good reason: everything, from the latte to the sugary brioche and the homemade granola parfait, is consistently delicious. A focus on fresh ingredients and simple, comfortable décor makes this a great place to hang out and read the paper on a weekend afternoon. The motto at Flour is “Make life sweeter…eat dessert first!”-and it’s hard to refuse when the smell of freshly baked treats greets you as soon as you walk in the door.

If, on the other hand, you want to overhear conversations in Italian, French, Spanish and some Eastern European language you can’t identify simultaneously- Café L’Aroma is the place to take a seat. It’s at the other end of Newbury, close to the Public Garden. These people know good coffee, and any one of the talented cadre of baristas will create a lovely flower of foam in your cappuccino. Specialties include the Red Tea latte, made with rooibos tea leaves prepared like espresso, and real Italian gelato.

Heading up Charles Street in Beacon Hill, you’ll find Panificio. This place has the air of a European coffee shop, with its warm, red walls and old black-and-white photographs. Prices are steep, but no one will mind if you bring a book and hang out for hours. Find the best seat along the wooden counter that looks out onto Charles Street, but expect a wait if you go for weekend brunch. Though its sister-site didn’t last long in the Back Bay, loyal customers still flock to the old original in Beacon Hill.

A stone’s throw away, in the Financial District, Red Barn is less a coffee shop and more of a coffee counter. Located next to the post office counter in old Faneuil Hall, and convenient for the office workers who rush the place at 9am. Ask for a café au lait-you won’t be disappointed-and take your drink outside so you can admire the red brick of yester-year tucked amongst the cold stone skyscrapers of the Financial District.

On any given afternoon at the North End’s Caffe Paradiso, you might find a soccer match being played on the television screens over the bar, with an audience of local Italians crowded around, shouting encouragement and insults at the athletes. Grab a shot of espresso and a slice of torta della nonna, and sit down at one of the marble-topped tables with a view of Hanover Street. If you want to understand what’s being said, sign up for one of the Italian classes that takes place each night in the basement. 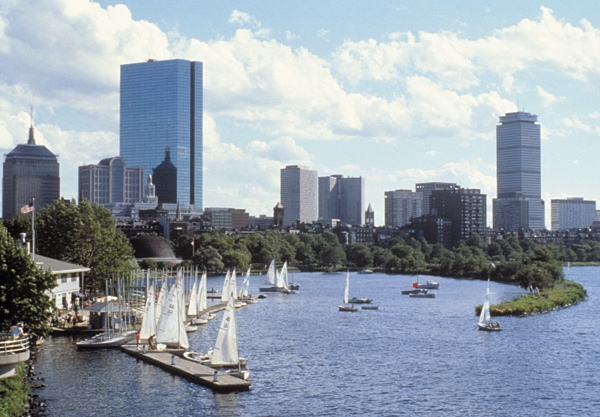 Across the River in Cambridge, you’ll find even more cafes to tempt you, beginning in Central Square. Named for its original address in Inman, 1369 is truly a locals’ spot. You’ll find lots of studious Cantabrigians plugged into laptops and iPods as they sip their fair-trade coffees. Many tables in a small space make for a tight squeeze, but 1369 is open late, and they won’t mind if you camp out. Try the bread pudding or the vegan apple pie with your daily blend.

Tucked around a bend in Harvard Square stands Algiers Coffee House. Moroccan décor and Arabic scrolls on the walls make this a unique place to spend an afternoon. It’s warm and cozy in wintertime, and the clientele is eclectic-college girls in legwarmers, professors grading papers, families with tots. Head upstairs for the best seats in the house, and order a Turkish coffee, a pot of tea made with a pile of fresh mint, or a plate of hummus and pita.

Just down Brattle Street, L.A. Burdick’s serves up the best hot chocolate in New England, along with a delectable selection of chocolate mice, (tiny, mouse-shaped chocolates that are iconic in Boston) and a mean mocha with whipped cream. On a hot summer day, you can even get your drinking chocolate over ice. The décor here is shabby chic, and it’s a popular (read: crowded) place to sit and chat, but if you arrive at an off-hour (early or late), you’re likely to find a corner all your own.

Farther north, smack in the heart of Davis Square, Diesel Café is known as a youngish hang-out for lesbians and hipsters. With a pool table, clientele of hip regulars, and artsy décor, it’s got an aura of “cool.” You can even have your picture taken in their black-and-white photo booth. Their big salads are a stand-out, as are their coffee drinks, but finding a seat can be a challenge at weekends.

On the outskirts of the city, in Jamaica Plain, City Feed & Supply is not a coffee shop in the traditional sense-it’s more of a tiny gourmet grocery-but it offers real coffee, along with hearty muffins and sandwiches. A couple metal seats are available for lounging while flipping through neighborhood real estate listings or the local JP Gazzette. It’s popular with hippy kids, moms with strollers, and the rest of the eclectic JP populous. City Feed has been so popular in its current location near Stonybrook T stop that it’s getting a brand new (and much bigger) space on Centre Street as of Spring 2008.

From Somerville to the South Shore and everywhere in between, it could take years to discover your perfect blend of ambience, amenities, and beverage selections in a Boston coffee shop. But one thing is certain–you won’t run out of options. 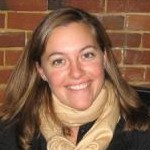 Andrea Calabretta is a freelance writer and editor based in Boston, MA. She’s an avid fan of yoga, red wine, and foreign travel. Read about her culinary adventures at http://bellyglad.blogspot.com.

About the Author Andrea Calabretta

Andrea Calabretta is a freelance writer and editor based in Boston, MA. She’s an avid fan of yoga, red wine, and foreign travel. Read about her culinary adventures at http://bellyglad.blogspot.com.