Nestled among the financial district, North End, and Boston Harbor, Faneuil Hall sits in cobblestone among some of the oldest and twistiest tangles of streets in Boston. An inevitable part of a visit to this city includes a stop at this tourist hub filled with restaurants, shops and souvenirs galore. Aside from the bustle of tourists, the area has a decidedly British feel. Not far from the waterfront, this is where you will find that lobster you've been waiting for as well as other traditional New England fare. 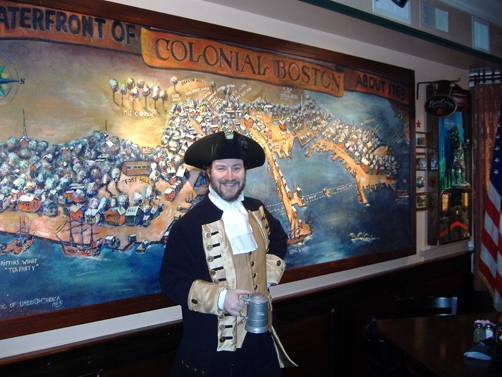 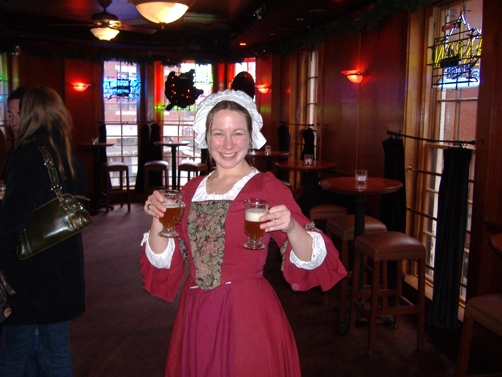 Nestled among the financial district, North End, and Boston Harbor, Faneuil Hall sits in cobblestone among some of the oldest and twistiest tangles of streets in Boston. An inevitable part of a visit to this city includes a stop at this tourist hub filled with restaurants, shops and souvenirs galore. Aside from the bustle of tourists, the area has a decidedly British feel. Not far from the waterfront, this is where you will find that lobster you’ve been waiting for as well as other traditional New England fare.

In addition to forming one of the main nerves of history running throughout Boston, this area also hosts some of the most popular nightlife where locals and tourists alike come to mingle. It is possible that the historical significance of this hotspot often gets overlooked in lieu of its nighttime festivities. In fact, the spirit lives on, for it is the pastime of consuming alcohol that forms one of the most important aspects of Boston’s turbulent history.

Spend the late afternoon-evening exploring Faneuil Hall and afterward join a Freedom Trail Foundation’s Historic Pub Crawl for a decidedly different take on the area. The tour highlights the importance of the pub in colonial times and the crucial role that it provided as an unofficial meeting place for Revolutionary figures to toss a few back, loosen up from the British ideals constricting them, dream up fanciful plans like the Boston Tea Party, and summon the nerve to see these plans through.

It is a great way to infuse yourself with the area’s history especially since so much of it depended on the Sons of Liberty infusing themselves with alcohol! After all, you didn’t actually think that a sober man came up with the idea to chuck tons of tea into the Atlantic, did you? The pub tour helps you get in between the straight-edged lines of your history textbook and walks you down the streets where these events actually occurred.

The tour departs from the marketplace at 5:30 in the evening and runs for two hours. You will be greeted by a local thespian decked out in traditional colonial garb including a wool cape and a tri-cornered hat. Allow yourself to engage with this character as he animatedly introduces himself as one or another Revolutionary figure and transports you back to the colonial times with colorful stories illuminating the secrets behind certain features of Faneuil Hall that you might otherwise have missed if you’d kept your focus on the Coach storefront or the sprawling food court.

Under the guidance of this swashbuckling gentleman, the group will head around a corner away from the frenzy of souvenir shopping and street performances and onto a tiny, cobblestoned alleyway of Marshall Street-historically known as Blackstone. It is Boston’s oldest city block. Tucked away from the din of the marketplace and the traffic pouring out of the financial district, this crevice contains a quiet that resonates with traces of its past. If you start to get a whiff of the ghostly presences, some refreshments are on the way that should take that edge off.

The tour makes a visit to each of four pubs-Bell in Hand, Green Dragon, The Union Bay Oyster House and The Point. Each visit includes a sampling of Sam Adams beer, some traditional light fare (beans, oysters, fried scallops and wraps), a history lesson and a toast.

First, you’ll visit Bell in Hand, the oldest pub in America. Next, you’ll swagger across the street to Green Dragon, where the Boston Tea Party was conspired. Then, you’ll drop in to the Union Bay Oyster House, the oldest restaurant in America and the building where the underground newspaper, The Massachusett’s Spy was published in secret.

Finally, you’ll wrap things up at The Point, a place of no historical significance, but which you may consider as a launching off point for the rest of the evening. Polish off another beer and you should have gained enough of the audacity and mischievousness of the revolutionaries to go and flaunt your new knowledge of Boston’s history to the unassuming locals.

Next, head for dinner at Durgin Park, located right in the marketplace-a great pick for folks interested in a lively atmosphere along with some traditional gut-sticky New England fare based on old-Boston recipes. You can sit outdoors alongside the bustle of souvenir shoppers, or stay indoors in the old-fashioned dining area where you’ll be surrounded by the rowdy din of diners chowing down on hearty American grub.

If you can’t stomach any more fried food, you can always enjoy some tasty noodles at Wagamama, a casual, Asian-inspired noodle bar beloved in London and fresh off the boat in its debut American location.

Finally, after all the touring and dining, if you’re still not ready for your evening to end, drop in to one of the area bars for a nightcap. You can check back in to one of your pub tour destinations, where the crowd has likely picked up, or you can try something new.

The Purple Shamrock is great for a beer and some live music, Sissy K’s will have you rubbing up against the collegiate crowd, at Red Sky you can sip a martini in a trendy lounge atmosphere, and at Boston Rocks you can hop on the dance floor. The options are endless and the location is prime for you to make history with some of your own debauchery!

About the Author Kelly Egan