52 Things to Do in Nova Scotia 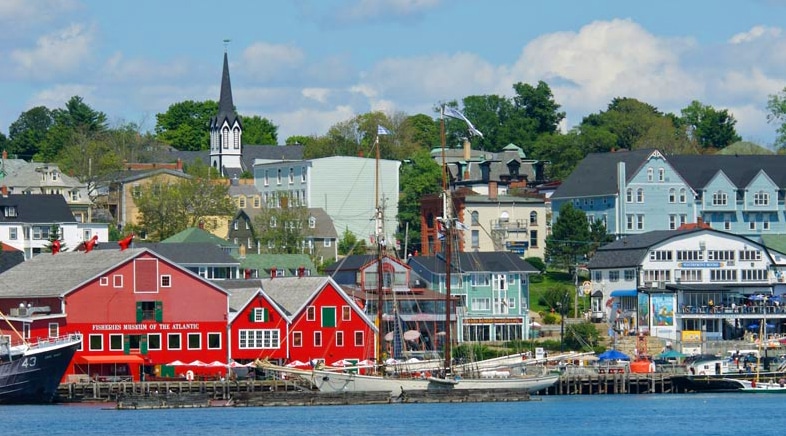 Nova Scotia is unique in that there are so many attractions and activities within a thirty-minute drive and even more if you want to head up to Cape Breton. There are 52 mentioned here but this is out of hundreds that abound.

52 Things to Do in Nova Scotia 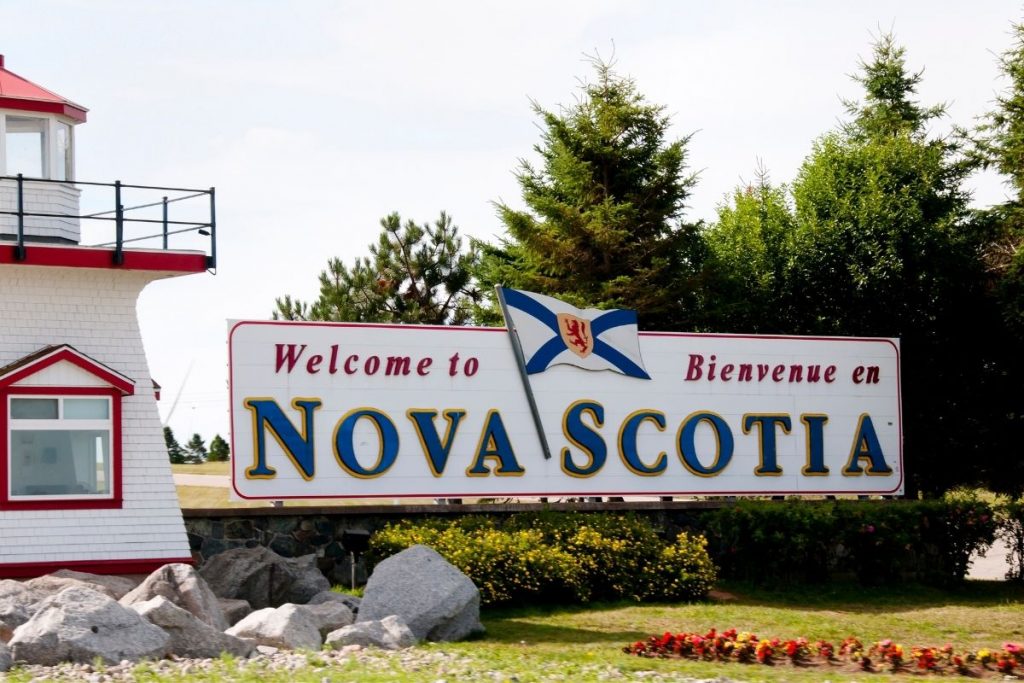 1. Peggy’s Cove: The famed lighthouse at Peggy’s Cove has been a Nova Scotia icon for over a century. 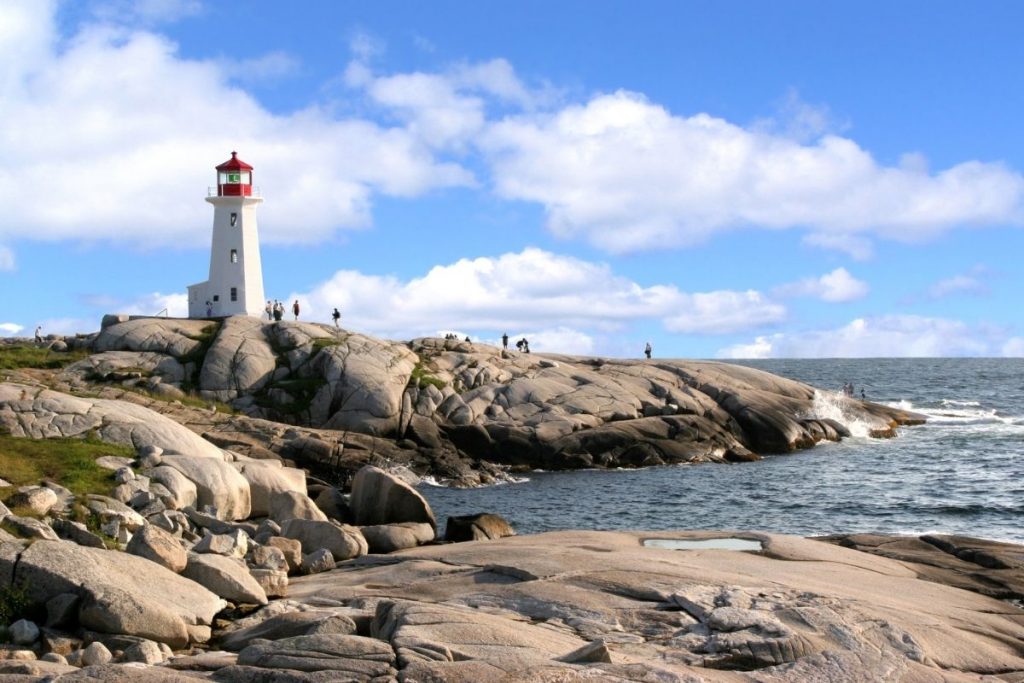 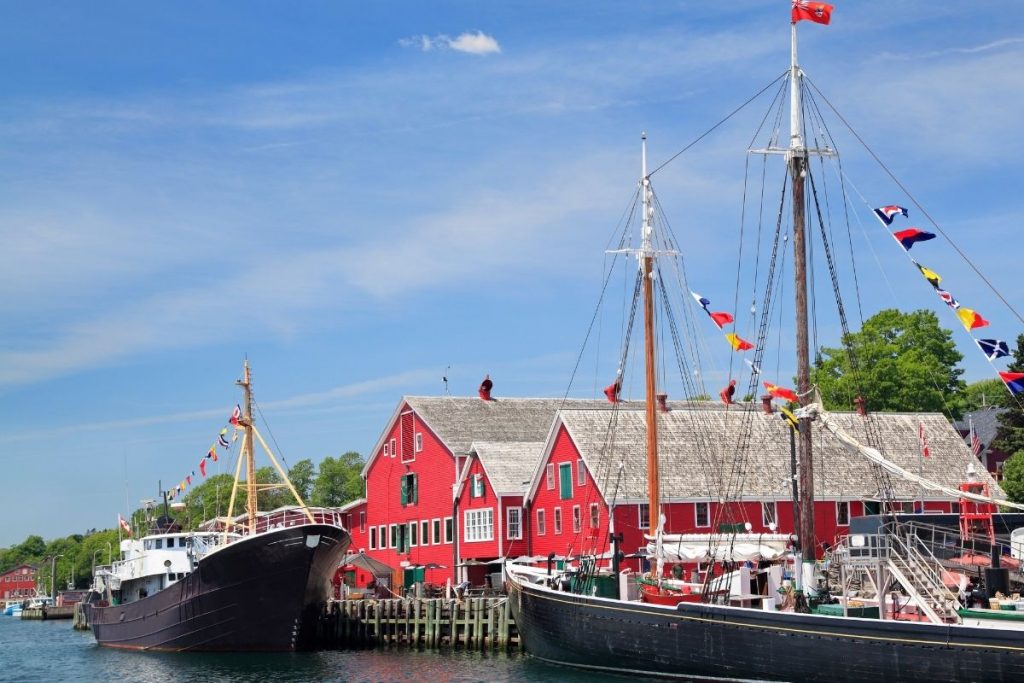 3. Cabot Trail: Alexander Graham Bell thought that this mountain-to-sea highway traveled through the most beautiful scenery in the world. 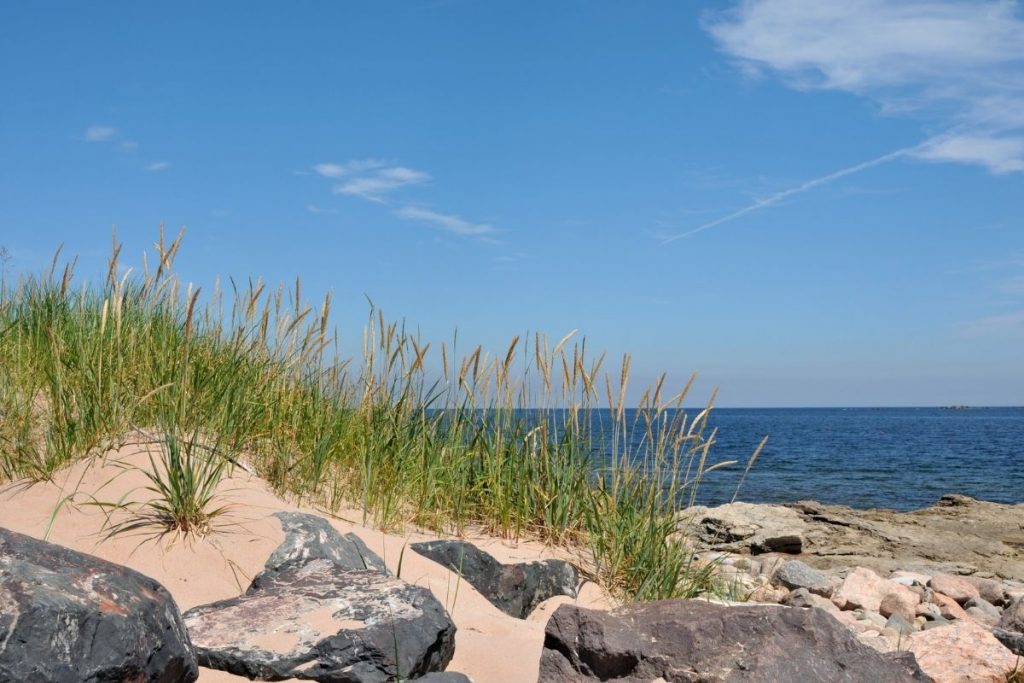 4. Fundy Tidal Bore Rafting: Since the Bay of Fundy has the highest tides in the world the returning waters push a large front wave propelling rafts on a surf of whitewater.

5. Alexander Graham Bell Museum in Baddeck. Bell summered for over 30 years here and invented many items including the hydrofoil. The museum is one-of-a-kind.

6. Anne Murray Centre in Springhill: The Snowbird singer was born and raised in Springhill and there are hundreds of artifacts and testimonials including one from Elvis.

9. Pier 21: “Canada’s Ellis Island” has many exhibits from 100 years of immigration.

10. Harbour Hopper Tours: Take an historic tour of the harbour in an amphibian craft.

12. Bluenose II: This schooner was undefeated in the sailing races that came before the America’s Cup. It is usually moored in Lunenburg but travels to Halifax too.

15. HMCS Sackville: The last of the World War II corvettes and actual sub-killer.

16. Quaker Whaler House: This Dartmouth whaling abode was built in 1786.

17. Province House: The symbol of independence for Nova Scotia was built in Charles Dickens time and the author, himself, visited it.

18. Gathering of the Eagles: Every February in Sheffield, Nova Scotia hundreds of bald eagles swarm in to feast on chicken carcasses thrown out by farmers. It is a birdwatcher’s dream.

20. Royal Nova Scotia International Tattoo: For 10 days in July there is a celebration of military marching bands, highland pipe bands as well as performers from around the world. This is one of the largest of its kind anywhere.

21. Grand-Pré National Historic Site: This park and museum is to commemorate the French culture that was brought to an abrupt halt when, in the late 1750’s, the British expelled the Acadians. A statue of H.W. Longfellow’s Evangeline keeps watch at the entrance.

22. Fortress Louisburg National Historic Site: This is a huge reconstructed fort in the manner of the original that protected King Louis IV’s entrance to Canada – complete with re-enactors.

24. Art Gallery of Nova Scotia: Art from the Group of Seven to folk art is shown here.

25. Cape Blomidon: This area of the Annapolis Valley juts out into the Bay of Fundy for a fantastic hike along the cliffs.

26. Joggins Fossil Cliffs: The exposed rocks show one of the most fabulous displays of fossilized plant life and small reptiles in North America.

27. Cape Forchu Lighthouse: Located in the southernmost city of Yarmouth this working lighthouse contains a tea room and museum. 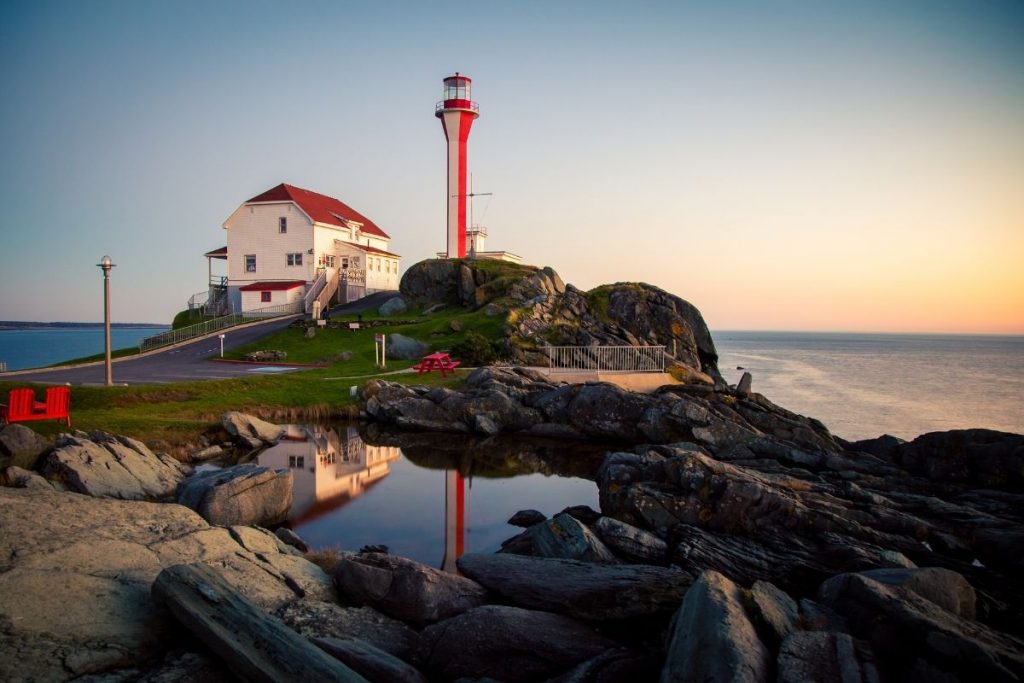 28. Springhill Miner’s Museum: Go down a real coal mine.

29. Shubenacadie Canal: Hike or take a guided canoe trip from the Atlantic Ocean to the Bay of Fundy along an old barge route.

30. Lobster Suppers: In the summer in almost every part of Nova Scotia there are lobster boils put on by churches and other organizations to raise money for charities.

32. Liverpool Privateer Days: Beginning on the weekend around July 1st of every year the town of Liverpool has a festival in praise of the “legalized pirates” that harassed the United States’ ships during the revolutionary War and the War of 1812. Pirates, red-coats and privateers abound!

33. Sea Kayaking: With its thousands of islands Nova Scotia is a sea kayaker’s dream.

34. Biking: Many outfitters are available to lead bicycle tours of Nova Scotia.

35. Golf: There are dozens of fine 9 and 18 hole golf courses with many spectacular ocean vistas.

36. Annapolis Royal: The first sustained European settlements in North America were at Annopolis Royal. The French village has been rebuilt and the British Fort Anne restored.

37. Eastern Shore: This is one of the most scenic ocean drives in the province and leads from Dartmouth up to Canso, taking in Liscombe Falls and the rebuilt settlement of Sherbrooke Village.

38. Shearwater Air Museum: Shearwater features a history of aircraft that guarded the continent from submarines in two world wars. The museum has rebuilt displays including a Fairey Swordfish, the torpedo plane that stopped the Bismarck.

39. Sandy Beaches: There are over 100 sandy beaches in Nova Scotia with the ones on Northumberland Strait having the warmest water north of North Carolina.

Things To Do in Halifax

Halifax is the capital and largest municipality of the Canadian province of Nova Scotia. Halifax is a friendly waterfront city with a lot to offer visitors. Below are some of our favorite things to do in Halifax.

40. Halifax Citadel: One of the oldest British fortresses still standing in North America. Re-enactors represent the 78th Highlander Regiment and life in the 1800’s.

41. Kejimkujik National Park: In many areas of the country one would have to travel many hours to get to a wilderness area. “Kejie” is only two hours away from Halifax.

42. Hydrostone Village: After the Halifax Explosion of 1917 a devastated area was rebuilt with concrete blocks and these residences exist today in a unique subdivision.

43. St. George’s Anglican Church: Built by the Duke of York in Halifax in 1801 this round church was almost destroyed by fire in 1994. Painstakingly rebuilt it has now retained its former glory.

44. Historic Properties- Halifax: This is a great place to walk through historic buildings from the time of the early 1800’s and find fine shopping and dining.

48. Buskers Festival: For two weeks in August buskers from around the world gather in Halifax.

Things To Do in Cape Brenton

49. Whale Watching: From Brier Island on the Bay of Fundy to Cape Breton there dozens are whale-watching excursions that observe almost every species of northern whale. There are an abundance of things to do in Cape Breton and this is one of the most popular. 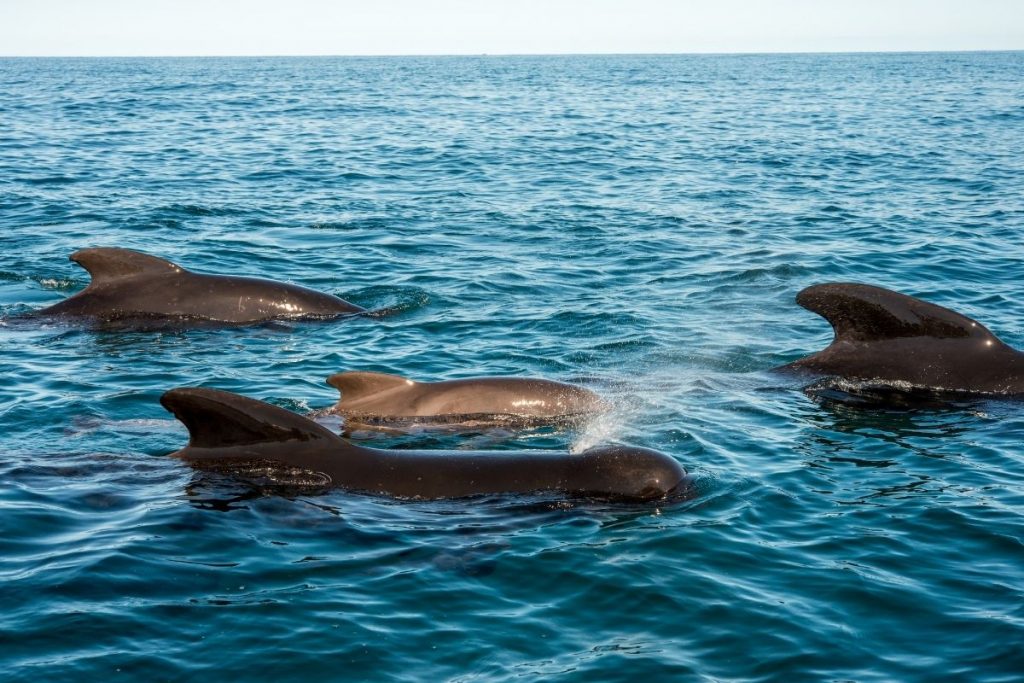 50. Cape Breton Highlands National Park: This famed hiking area is known for moose, bald eagles, and osprey. One of the most beautiful things to do in Cape Breton in the spring, summer, and fall.

51. Fall Leaves Tour: One of the most beautiful things to do in Cape Breton in the Fall! Many tourists flock to Cape Breton to begin their “autumn leaf tour” and follow the leaves turning color all the way south to Virginia. 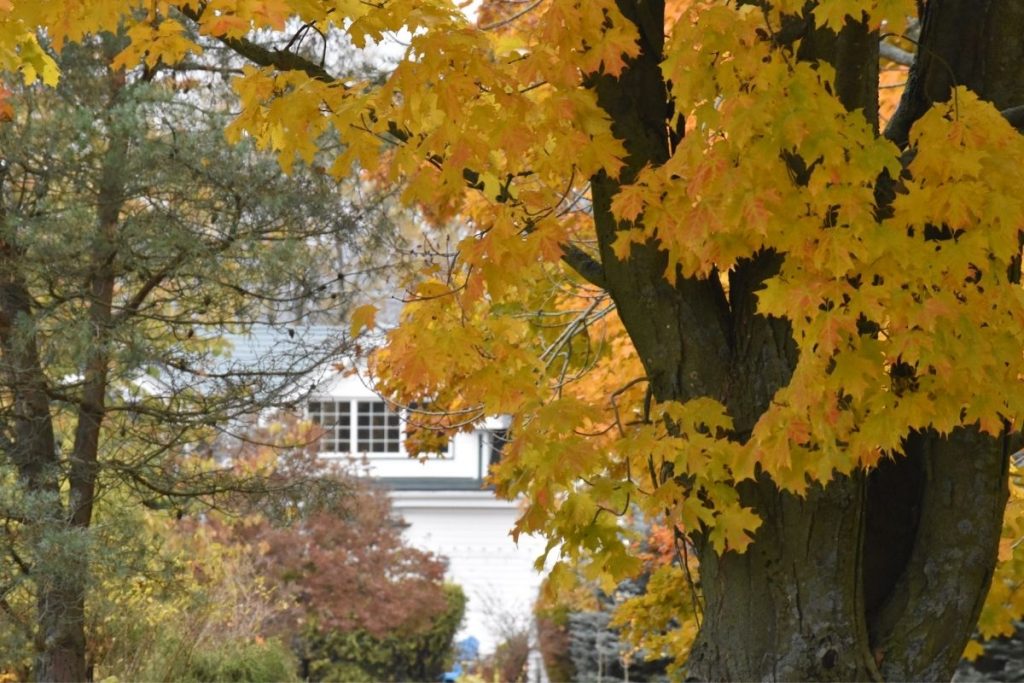 52. Baddeck: On Cape Breton’s Bas D’Or Lakes – ad inland sea – Baddeck is the launch point for the Cabot Trail. In addition, it is a sailing and golf paradise. In fact, sailing is one of the more popular things to do in Cape Breton.

If you are looking for more reasons to visit Nova Scotia, check out fellow travel blogger, Rob Taylor’s post on his favorite 30 things to do in Nova Scotia and his podcast episode on the Bay of Fundy and Nova Scotia Lighthouse Route.

There are many more attractions and reason to visit Nova Scotia. These can be explored by coming here and sampling these first 52! For more Nova Scotia information be sure to visit traveltonovascotia.com.

The best time to visit Nova Scotia is between May and October. There are many fall festivals as well as the beautiful autumn leaves. 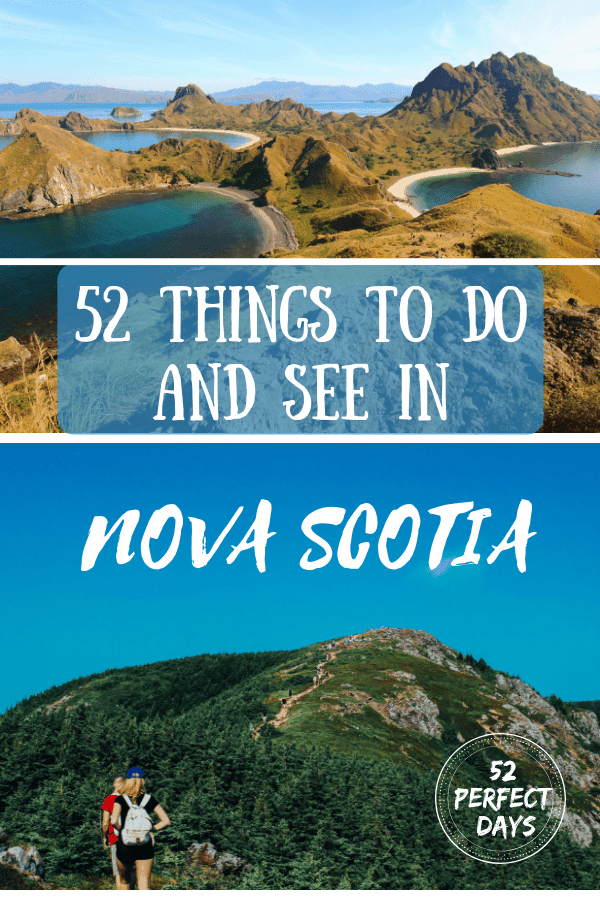