52 Pieces of Public Art in Seattle 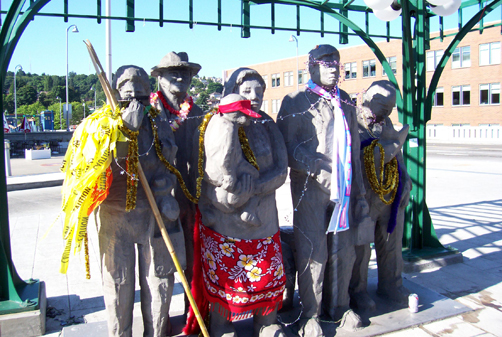 In 1973 Seattle adopted an ordinance that calls for one percent of any capital improvement project funds be set aside for the purchase and installation of public art. As a result, there are 350 permanently installed artworks and another 2,600 portable works in the collection.

That is just the stuff the city approved and paid for. Seattle is also full of homegrown public art, some that are strictly in the eye of the beholder. The following is a list of 52 of the best, or most infamous must-see public artworks, sorted by neighborhoods.

52 of the Best and Most Infamous Public Art in Seattle

The Troll, beneath the George Washington Bridge on 36th St. A giant troll consuming a Volkswagon Beetle–suffice to say, it is a Seattle landmark.
Waiting for the Interurban, 34th St., and Fremont Ave. Six figures waiting for a bus but the fun part is the folks in Fremont delight in dressing them up so the statue is ever-changing.

Vladimir Lenin Strolling in Fremont, 36th and Fremont Pl. Oh yes, a real Soviet-era, 54-foot statue of Lenin in all his commie glory. And it’s for sale!

Republic of Fremont Rocket, 35th and Evanston. To go along with Lenin a nice 35-foot Soviet-era rocket mounted atop a building and waiting to blast off.

Wall of Gum, outside the Market Theater. Yes, 15 by 50 feet of leftover gum stuck to a wall and 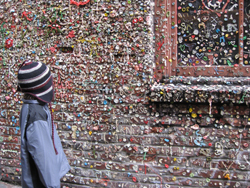 Rachel the Pig, right at the entrance to the market on Pike St. In essence a 500-pound piggy bank, Rachel collects spare change for the Market Foundation which provides meals and health care for the poor. Getting your picture taken with Rachel is a market tradition.

Totem Poles, at the Victor Steinbrueck Park north of the market. Amongst the sleeping street people and tourists gapping at Puget Sound, the park also features two 50 foot cedar totem poles worth seeing.

Hammering Man, just south of the market at University. A monstrous kinetic sculpture of a silhouetted man hammering away outside the Seattle Art Museum.

Olympic Sculpture Garden, 2901 Western Av. An awesome collection of sculptures including the likes of Alexander Calder and Claus Oldenburg right along the waterfront. And it’s free!

Ivar Feeding the Gulls, Pier 54 at Alaskan Way. Ivar’s is a seafood institution in Seattle and this sculpture celebrates their founder. Great photo op!

Angie’s Umbrella, Western Ave. and Lenora St. Smack dab in the middle of an intersection this 30 foot, red metal umbrella is inspired by Seattle’s rainy weather. Watch for awhile as it turns 360 degrees when the wind shifts.

Wave Rave Cave, Corson St. Beneath an overpass there are Cool Whip like waves covered with pea gravel. Big deal you say? Check it out at night when it is lit by moving psychedelic lights, reminiscent of the good old days of partying in Belltown.

Seattle Center is full of public art, dating back to the 1962 World’s Fair and you will find it around every corner. Here are a few notable examples.

Dreaming in Color, promenade to McCaw Hall. Nine large metal, mesh scrims rotate through a series of computer-controlled “mood lighting”. There all sorts of art color theory behind it but just go with “pretty”.

An Equal and Opposite Reaction, McCaw Hall. Swirling down from the lobby ceiling are tubes of aluminum hung with found objects like push pins and tape measures. A monument to the performances that take place at the hall, it was constructed by the Seattle Opera’s scene shop.

Fountains, throughout Seattle Center. There are no less than six marvelous fountains in Seattle Center including the very popular International Fountain where you will find large quantities of small children romping regardless of the weather. All are beautiful and relaxing.

Baby Whales Tale, next to the Children’s Theater. This five-foot-high bronze whale’s tail seems to emerge from the ground, or dive into the concrete depending on how you look at it.

Kobe Bell, in the Kobe Bell Meditation Garden. A gift from Seattle’s sister city, Kobe Japan in 1962, the bell hangs from a Shinto Temple amidst a Japanese Garden.

Grass Blades, 305 Harrison St. Tall, metal, moveable blades guide the visitor into Seattle Center and provide a glimpse of the lump of steel and aluminum known as the Experience Music Project.

Experience Music Project Building, 5th Av. N. Undoubtedly one of the most talked-about buildings in Seattle this homage to music is made up of 3000 aluminum and stainless steel shingles that are burnished, painted, overlapped, slumped, and connected in a way that is both fascinating and irritating. But you certainly can’t miss it and it certainly will start a conversation.

The Kids, as you come off the West Seattle Bridge. Some would call them the creepy kids, as some do, but let’s be sensitive here. There are four black metal children leaping about on the side of the road and the locals use them to advertise Girl Scout cookies and sports by dressing them in t-shirts and taping items to their little hands. How you know you’re in West Seattle.

The West Seattle Murals. Throughout the California Street area of West Seattle there are murals depicting the history of the area. Just look on the side of buildings and you’re bound to run across one.

Dragonfly Pavilion, 28th Av. SW and Dakota St. A giant metal abstract dragonfly leads the way to the Longfellow Creek Drainage Project, which is part of a trail system that runs through West Seattle. So, see the dragonfly and take a hike.

You could say the people that live in Capital Hill are the public art but that would be politically incorrect in so many ways. Instead, let’s look at the nonbreathing art.

Dancers’ Series: Steps, along Broadway. Look down as you walk along Broadway and take a dance lesson by following the bronze footsteps arranged as a couple’s dancing feet. Do the waltz, the lindy and six other dances.

Black Sun, Volunteer Park. A large, black granite ring overlooking downtown this sculpture is a popular spot to hang out and take a break during a downtown workday.

The Tempest, just inside Safeco Field. Made up of 1500 translucent baseball bats this sculpture spirals down from the ceiling of the entrance to the Mariners home field. The sculpture is animated by a computer lighting system.

Pioneer Square likes to sell itself as an art center and has First Thursday art walks that feature the various galleries. There is also some interesting public art on display.

Tlingit Totem Pole, 1st and Yesler. A very large, Native American Totem Pole that has was brought from Alaska in 1899.

Pergola, 1st and Yesler. Built in 1909, this glass and iron structure once was a stop for the streetcar and is on the list of National Historic Landmarks. It also survived getting creamed by a truck on 2001 and was restored.

Seattle Justice Center, 5th and Cherry. The justice center has a number of pieces of public art, all with themes related to law such as “Points of View” and “Codes and Protocols”. It’s a public building so drop by.
Seattle City Hall, 6th and 4th. Not only does city hall have permanent public art it also has galleries with rotating displays.

Tumbling Figures-Five Stages, 6th and Jefferson. Originally installed in the now imploded King Dome, this sculpture was moved to the outside of the King County Parking Facility where five diamonds with a silhouetted figure tumble down the side of the building.

If you are a purest, this list maybe 52, or more, or less, but it’s a start. If you want complete information on Seattle public art, including downloadable maps, go to seattle.gov/arts/publicart/

Marion L. Head is an educator and freelance writer who lives in Seattle, WA. Marion has published fiction in various anthologies and nonfiction on various websites. Marion is author of South Dakota: An Explorer’s Guide for Countryman Press.

About the Author Marion Head