During the peak of the Inca civilization, Cusco (Cuzco) was its thriving capital! Towering stone fortresses protected a city decorated with extravagant, golden-lined temples. No other civilization spanned a greater distance in South America than the Inca Empire and all roads led to Cusco by the 15th century.

Sadly, much of the incredible architecture and lavish treasures of the Incas was destroyed upon the arrival of the Spanish conquistadors. However, Cusco, Peru remains the perfect starting point to ponder the magnificence of the Inca Empire before its collapse.

The Incas did not have a written language when the Spanish arrived and after hearing the name of the city, they spelled it “Cuzco”. Today the “Cusco” spelling is used in Peru, but in Spain and in many other Latin American countries, the “Cuzco” spelling is still used.

For more incredible spots to learn about Inca history and culture, check out the top sights in the Sacred Valley.

TABLE OF CONTENTS show
Best Things to do in Cusco Peru
The Sacred Coricancha
Explore the Mighty Sacsayhuaman
Honor the Dead at Q’enqo
Gaze at the Water Temple of Tambomachay
Guard the Empire at Puka Pukara
Fun Facts about Cusco
Best Time to Visit Cusco
Places to Eat in Cusco
Compare Hotels and Airbnbs in Cusco
Where to Stay in Cusco
Read More About South America
52 Amazing Places To Hike In Chile
Finding Peace and Tranquility in Huanchaco, Peru
52 Things To Do in Buenos Aires

Best Things to do in Cusco Peru

If you prefer to stay in Cusco, then start your Inca tour at these must-see highlights of the archaeological mecca of South America!

No other site in Cusco warrants more praise as an example of Inca influence than the center of the universe itself. Nestled within the heart of the historic center of Cusco, Coricancha was the most revered structure in the Inca Empire.

Although the Church and Convent of Santo Domingo now sit atop the site, the foundation still proudly boasts Inca architectural genius. Cusco has survived numerous earthquakes since the Spanish conquistadors wreaked havoc on the Inca civilization but some of the stone walls of Coricancha have stood to this day.

Coricancha dazzled visitors with its golden-covered walls and doors, jewels and shrines honoring its most cherished deities. The most famous room was the Temple of the Sun, which was dedicated to the sun god Inti.

Before the arrival of the Spanish, the room beamed rays of gold with its gold artifacts and elaborate gold statue of Inti. Mummies of deceased Inca royalty could also be found inside this majestic temple.

Other notable temples in the complex were the Temple of the Moon, the Temple of Venus and the Stars and the Rainbow Temple. Many of the beautiful decorations of the temples were destroyed to build the Church of Santo Domingo.

Today, the site is a remarkable intertwining of cultures and architectural styles. The colonial architecture of the church, the stone masonry along its foundation and the exhibits of the museum make Coricancha one of the world’s most fascinating travel destinations.

Cusco was designed in the shape of a puma and the ruins of Sacsayhuaman were the head of the sacred animal. Unsurprisingly, the head of the puma is where you have the best views overlooking the city.

Construction began on the fortress during the 15th century and took upwards of 80 years to complete. The framework of the massive complex is a testament to the engineering brilliance of the Incas. Many of the stones along the foundation of the structures were taller than the workers tasked with the project.

A nearby quarry provided the building materials and it took upwards of five years to move some of the gargantuan stones into place. The stones were interlocked with such precision that not even devastating earthquakes have shaken the walls for hundreds of years.

The primary use of such an immense site was likely as a military base but it also served as a place for religious ceremonies and storage. Once the Spanish conquered Cusco, much of the site was ransacked to remodel the city. However, the fortress was too formidable to be fully taken apart and this significant engineering achievement can still be appreciated today.

Honor the Dead at Q’enqo

The network of caves, tunnels and other rock carvings at this mysterious site provide a glimpse into the sacrificial rituals practiced by the Incas.

The crisscrossing canals dug into the rocky foundation suggest that liquids of some sort were offered to the gods. Although the precise rituals remain a mystery, it is evident that animal and human sacrifices took place at Q’enqo.

You will find man-made carvings depicting animals that represented the three worlds the Inca believed in. The condor symbolized the heavens, the puma represented life on Earth and the snake epitomized the underworld. A large statue of a puma can be found on the outside of the site and a carving of a serpent can be seen along the floor of a dark chamber.

Adding to the grim atmosphere of the ritualistic site, a giant stone altar can be found inside the tunnel. The altar was likely the spot for sacrifices and the mummification of human bodies.

Gaze at the Water Temple of Tambomachay

Tambomachay remains a mystery to archaeologists but its visual appeal leaves much for the imagination.

Enchanting tiny waterfalls cascade down the terraced structure that was strategically placed along the original Inca Trail. The path just outside of Cusco spanned the length of the empire and Tambomachay was believed to be a resting point. Inca messengers were noted for running great lengths every day and this could have been a frequent stopping point.

Its pristine layout featuring canals and aqueducts made it the perfect location to relax. From Inca royalty to military members, the site likely served as a place to enjoy the spring that constantly provided water.

The intricately carved openings at the top-level hint at the site’s symbolic representation of the four kingdoms of the Inca Empire. In addition, the site possibly hosted notable religious ceremonies related to water.

Guard the Empire at Puka Pukara

Known as the ‘Red Fortress,’ Puka Pukara was an important military site for the Incas tasked with guarding the capital from looming threats. Those standing at the fort had a brilliant aerial view of the surrounding valley to watch for invaders. Also, the site’s proximity to the tranquil Tambomachay further suggests to its military function.

Puka Pukara’s design is not as aesthetically pleasing as other archaeological ruins surrounding Cusco but that is likely due to its functional purpose. Being placed along a commonly used road, the site was believed to be an immigration checkpoint for travelers attempting to pass further.

The stones used to construct the walls of the fort do not appear to be cut and stacked with the precision of ceremonial sites. This suggests that Puka Pukara was built at a much quicker pace to accommodate the growing empire.

Cusco is defined by its distinct dry (May-October) and rainy (November-April) seasons. Thus, the months of May to October provide travelers the most ideal weather conditions when exploring Cusco.

Avoid the months of June to August if you are hoping to escape the crowds of peak tourist season.

Places to Eat in Cusco

Foodies have endless options for a delicious meal and searching for the next restaurant to visit is another highlight of exploring this magnificent city.

Enjoy breakfast anytime of day at Jack’s Café and sip on a delicious coffee with your filling meal. Head over to the artsy San Blas District for an authentic Andean lunch at Pachapapa. For dinner, enjoy the cozy décor of Uchu Peruvian Steakhouse or save money with one of the best burgers in town at Chakruna Native Burgers.

Compare Hotels and Airbnbs in Cusco

Where to Stay in Cusco

Cusco is the gateway to the glorious Machu Picchu, one of the New Seven Wonders of the World. With over one million tourists flocking to the ancient Inca citadel yearly, Cusco continues to see a dramatic increase of worldly travelers. The city boasts a versatile range of accommodation options for any type of budget and easy access to all the astonishing archaeological treasures.

Experience Cusco in style by staying in the luxurious, colonial-style Inkaterra La Casona Relais & Chateaux. Inkaterra offers its guests five-star treatment with heated floors, massages and private guides to show them around Cusco.

The Andean Wings Boutique Hotel provides a cozy stay with an excellent location just a couple blocks away from Plaza de Armas. The attentive staff cares for your every need as you admire the artwork decorating the colonial building.

For backpackers, Pariwana Hostel is a vibrant location for an affordable stay while meeting lots of worldly travelers. The hostel hosts weekly activities and you can book day trips inside the facility.

Cusco may be the starting point for your trip to Machu Picchu, but its unusual, atypical South American spirit and energy are certainly inviting for more. 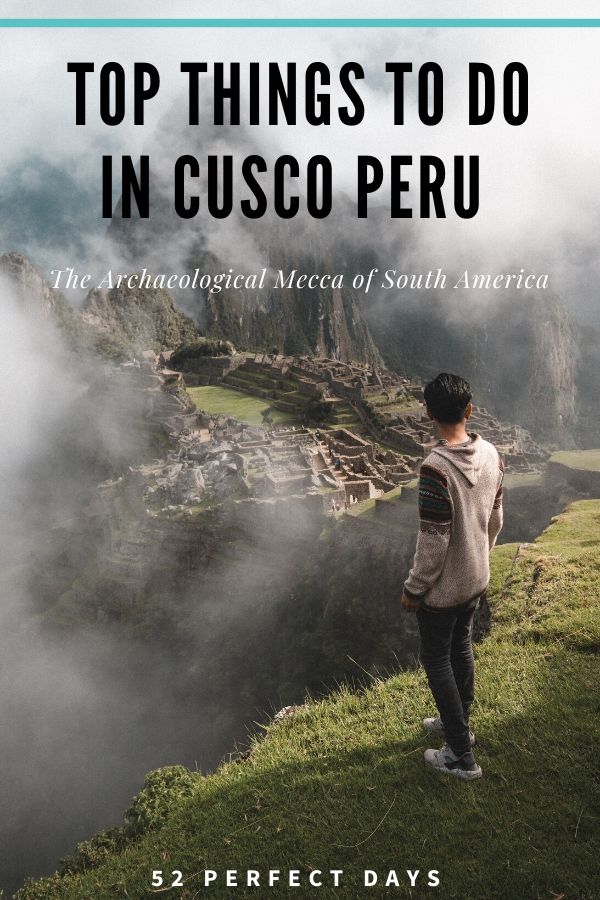 52 Amazing Places To Hike In Chile

52 Things To Do in Buenos Aires

We hope our list of things to do in Cusco, Peru and it helps create your perfect day when you visit.

Being born with a passport that needs a visa for almost every country, Dushan has always wondered what other places look like. In 2001 things changed and ever since he felt the freedom of movement, he knew he needed to see everything the world has to offer. Now he is managing Spottico his own digital travel magazine and traveling with his family.