Skip to content
TABLE OF CONTENTS show
Kuwait Visa
Kuwait Road Trip
Traveling to Kuwait: Getting There and Staying There
Kuwait City Nightlife

If you are a traveler who curious about exploring the Persian Gulf or the Middle East but struggling to find an accessible blend of the known and unknown, Kuwait – and particularly Kuwait City – may be the perfect place to begin your journey. Nowadays, a Kuwait transit visa is incredibly easy to acquire for a large number of nationalities, including citizens of the United States, Canada, Australia, Japan, and all EU countries. The Kuwait visa is valid for one week. Before that expires, if you’d like to continue to explore Kuwait, you can apply for a Kuwait eVisa from the official government website.

Kuwait is an oasis of the Persian Gulf, and should be considered as a destination for any bold adventurer

For these same countries eligible for a transit visa, this process only takes a few minutes; generally, if you’ve been accepted for a transit visa you will also be accepted through the eVisa application. Be careful though; the process can take several days to complete, and you would not want to be caught in between visas because then, regardless of your pre-arranged plans, you’d likely be forced to leave until the new visa comes through. It is also possible to acquire a temporary driver’s permit in Kuwait if you meet the requirements, which can also be found on their government website. 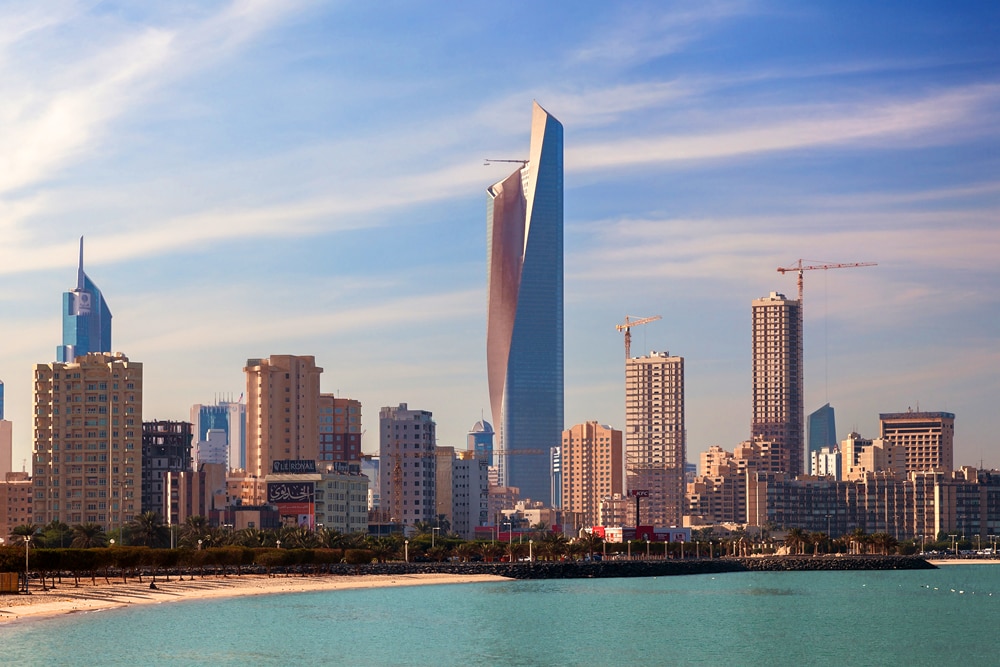 Then, you can do a road trip through Kuwait on the seven-day transit visa and enter a number of other countries along the Persian Gulf, depending on which direction you go: most popularly, the beautiful mountainous city of Tehran lies to the East, and the gargantuan skyscrapers of Dubai lie to the South. This journey is not for the faint-hearted, as the cultural barriers are found to be debilitating, exhausting, and unnerving to many Westerners, especially if one decides to drive through the country into other parts of the region. However, like many especially bold travel adventures, overcoming such limitations can make their reward doubly redeeming. If one decides not to explore other countries and stay within the confines of Kuwait, a week on a transit can also be found to be a suitable amount of time to absorb the riches of the area: soak in the beaches, explore the metropolitan, Dubai-like Kuwait City, or explore the historical sites in the country that lie inland, outside of the big city and away from the Gulf.

Traveling to Kuwait: Getting There and Staying There

In addition to the seven-day transit visa, there is also a visa on arrival that travelers can seek upon entering Kuwait. It is only valid for 24 hours, but this can give a traveler a feel for the city, and ultimately lead them to the decision of whether traveling in the country, as well as the region as a whole, would be a good fit. If indeed, they wish to explore the region, the transit visa is a convenient visa to obtain for many legal passport holders. If instead, the traveler would like to stay in Kuwait longer, they may also apply for a more long-term eVisa which grants them a ninety-day stay in the country. The longer visa also grants them permission to leave and re-enter without having to re-apply for a visa. This can be great if one is looking to explore the rest of the region, or simply go somewhere else and return within ninety days.

When talking about Kuwait City nightlife, it is important to note that Kuwait is a dry country, meaning alcohol is not served legally anywhere in the country. This, however, does not prevent people from having fun in the nighttime; if anything, it forces people to pursue different avenues of entertainment outside of alcohol. If you’re bored of going to a brand new place just to find yourself cooped up in some bar drinking a mediocre beer or an above-average cocktail, you may not be bothered by the lack of alcohol here. There are still dozens of dance clubs to choose from, as well as metropolitan park areas and restaurants open late. Some of the nightclubs are so vast, extravagant, and opulent that on the inside, they appear to have a size more comparable to an amusement park. They are known to have a layout similar to a mansion, with dozens of different areas to lounge and socialize, each with different atmospheres. Since Kuwait can have a particularly warm climate in the summertime, these party palaces usually come equipped with pools and even waterslides.

In a similar vein of extravagance, there are alternatives, yet no less extravagant, sources of entertainment in Kuwait City in the form of outdoor theme parks, combining theatre, natural beauty, and general leisure all into one. Kuwait’s Magical Fountain Park attracts a lot of tourists due to its wide walkways and well-constructed park atmosphere. This, of course, interestingly parallels the music blaring from the fountains within the park and the attendees enjoying its tunes. The music will be an unfamiliar experience to Western ears unless they are familiar with the musical styles of this area. In short, the style usually consists of an upbeat rhythm, with connecting and underlying string instruments such as sitars and drum sounds uncommon in popular Western music. The accompanying vocals are usually sung in a deep male voice in Arabic. But since many of the same music popular in the West is also popular in Kuwait, there is commonly a hybrid element of Western music in terms of tempo and melody. Sometimes a lush cultural experience entirely different from your own can be most easily expressed in music, and this music fountain park thusly became a gravitating attraction to reflect on the uniqueness of Kuwait City.

If after a long night of this one grows tired of socializing, there is always the stunning Persian Gulf to walk along, with networks of gulf side walking paths to make the trek more serene. Many places along the shores of Kuwait City, such as the highly recommend Al Kout, turns into a beach that is accessible at any hour of the day. This beach has a unique atmosphere because on top of the beach sits these columns of bridges, making it look like you are sitting inside of a palace while at the same time relaxing on a beach. Further, if one is still not tired of waterside attractions, there is also the Kobar Island nearby, a popular tourist attraction for those who want to feel surrounded by the azure gulf in the comforts of a total oasis.