Since Uruguay is so small, nowhere is far, traveling time is short, and there is never a lot of traffic. Here we share the best places to visit in Uruguay, the best things to do in Uruguay and what you need to eat when you are in Uruguay.

The words holiday and vacation mean different things to different people. For most, it involves taking a break from your ‘normal’ life. Our normal life as overlanders (vehicle-based adventure travel with a focus on self-reliance, resilience, and enjoyment of the journey) is usually one of movement, and a holiday from that simply means little or no movement.

After extensive travel throughout South America, I am excited to share our road trip and the best places to visit in Uruguay. If you are planning a trip to Uruguay I hope the below recommendations are useful.

Places to Visit in Uruguay

There are no mountains (the highest ‘mountain’ in Uruguay is just over 500m). The roads are generally straight and wide, passing over the undulating landscape. This gives you a feeling of traveling through wide-open spaces and makes the country seem larger than it actually is. Uruguay is just about perfect for our kind of holiday.

Because of these road conditions, Uruguay travel is easy with a rental car. Montevideo is a great city to begin a trip to Uruguay. This is really the only city in Uruguay and is home to more than half the population. We once read that Montevideo is known as the most relaxed capital city in South America. Our 2 week holiday there proved this to be true.

It’s a very easy city to get around.  Montevideo, the city has many surprises for the avid city wanderer. There are museums, markets, the old city, lots of parks, and The Rambla, which follows the Rio de la Plata for kilometers.

Things to do in Montevideo

Street art is a big favorite of ours and Montevideo has lots of it. You can spend days walking the back streets of the city, finding new pieces to add to your digital collection.

We are also interested in architecture and the city has some really lovely old buildings, many of them from the Art Deco period. Sometimes you have to look up to notice them, and it’s also a good idea to have a look into open doorways for some incredible foyers and entrance hallways. It wasn’t our first visit to the city and we spent it at our ‘usual’ boon-docking place, near the lighthouse, right on the Rio de la Plata. We find it a perfect place for the middle of a city even though it can be disturbed overnight by couples in cars, sometimes accompanied by loud music. But since our visit was in January, and most of the population was at the beach, Montevideo was generally quiet. Ever since we noticed the gaucho culture in Argentina we have been a bit fascinated by it. So when we heard there was a gaucho museum we went to see it. The museum has an extensive display of the silver accouterments of the gauchos. We were lucky because there was an English tour guide with a group, and we listened to some of the interesting stories and facts she was sharing with them.

The Gaucho Museum is housed in a beautiful old building – it’s more of a ‘palace’ really, full of marble and alabaster. It is now owned by Uruguay’s national bank and also houses a small interactive display of historical banking items. We were invited to “touch everything”. The best thing about our holiday in Montevideo was that it coincided with carnival in early February. We got to see the impressive Las Llamadas parade. It was a celebration of life, full of color and music and people having a great time. Other Locations and Cities in Uruguay to Visit

Laguna Garzón and the Coast

From Montevideo, we headed east along the Rio de la Plata and ultimately the Atlantic Ocean. For a small country, Uruguay has a flourishing tourist industry. Most of this is concentrated along the coast, east of Montevideo. There are many white, sandy beaches often interspersed with interesting rocky headlands.

Along the way we passed through Piriápolis, which also has some lovely old buildings, then stopped for a while in Punta Ballena where you can see the rather eccentric house of Carlos Páez Vilaró, Casapueblo. This is now a luxury resort hotel and has several galleries of the artist’s work. Punte del Este, which we like to compare to Australia’s Gold Coast, is the central tourist resort. There are lots of high-rises, restaurants, boutique shops selling designer labels, and beaches. It is crowded in the summer with visitors, mostly from Argentina and Brazil. We drove around it, through Manatiales, and on past José Ignacio until we reached a bridge over Laguna Garzón. The bridge is new and oddly circular in shape. On the other side, the paved road ends and we found our second holiday spot. It was right next to the lake. During the week there was nobody there but us. On the weekends a few people came to fish or picnic. We spent our second holiday in Uruguay relaxing for 10 days by the lake, only interrupted by visits back along the coast to José Ignacio for supplies. We finally forced ourselves to leave the idyllic life by the laguna to travel north to Tacuarembó. When you get away from the coast and drive through Uruguay you will notice that it is green and there seems to be water everywhere. The Rio Negro crosses the country from the north-east to the south-west. And it is not uncommon to cross water frequently as you drive through the landscape.

The land is mostly rolling hills covered with large farms. Cattle, sheep, and horses are a common sight. Land is also used for timber plantations, mostly eucalyptus; crops of soy, corn, and even rice; and vineyards, with Tannat being Uruguay’s signature wine. We sampled plenty of it and can vouch for its quality. Tacuarembó hosts an annual Gaucho Festival in early March and we wanted to check it out. It was 5 days full of interesting experiences. The celebrations went on most of the night. So we drove a few kilometers away from the festival site to sleep. We found Balneario Iporá, where we stayed for 2 weeks more when the festival was done. This was our third holiday in Uruguay. On our way back south we took a detour from the highway to San Gregorio de Polanco because we had learned that the town had murals. (We had also discovered murals in the small towns of 25 de Agosto and Pan de Azucar.)

When we arrived we also found a pretty little holiday town on the shore of a lake. Although we are sure this could have been a good place for a holiday in Uruguay, our 3 month visa was almost up and Brazil was calling. But we did stay 2 nights, enjoying the murals and the general ambiance. Uruguay has two UNESCO World Heritage Sites. One of them is the beautiful historic town of Colonia del Sacramento. The other is the old abattoir and frozen meat export site at Fray Bentos. Some think it an unusual addition to the list but, after visiting the site, we definitely found it worthy.

It is surrounded by a huge park right on the Rio Uruguay. It was the perfect place to park our camper for a couple of nights when we first arrived in Uruguay, and to check out the site at our leisure. If you are coming to South America for the first time, Uruguay would be a great place to start.

Everywhere we went we were greeted with a smile or a wave. The people of Uruguay are friendly and appear to be relaxed and contented.

After these 3 months in Uruguay, we have come to think that the mood of the people reflects the landscape. There are no big ups and downs; life just goes along smoothly.

As you can see, all good holidays for us seem to involve a quiet place by the water. Uruguay has these in abundance. I’m sure if we’d stayed longer we would have discovered even more tranquil spots that we would have had difficulty leaving.

One of the things that Uruguay is known for are its beach-lined coast. The water is warm and most beaches are waveless. There are many white, sandy beaches often interspersed with interesting rocky headlands and sand dunes.

Punta del Este is probably the most famous beach resort in South America after Rio de Janeiro. It’s located in Maldonado. There are beaches on the Costa de Oro or Gold Coast. Of course, there are also beaches in Montevideo, although they aren’t the most beautiful beaches in Uruguay.

The Best Time to visit Uruguay

The best time to visit Uruguay is during its summer months, which are between November and February. Temperatures are average between 72°F and 84°F. This is an especially good time to visit the beach areas.

A version of this article was originally published on dare2go.com/uruguay-just-place-holiday/

Interested in South America? You might love these articles: How to See Buenos Aires on a Long Layover or Port O’call and 52 Travels Tips From Around the World.

Yasha was the Aspiring Travel Writer of the Week on my podcast website, Break Into Travel Writing. Please check out her blogger profile! breakintotravelwriting.com/aspiring-travel-writer-of-the-week-yasha 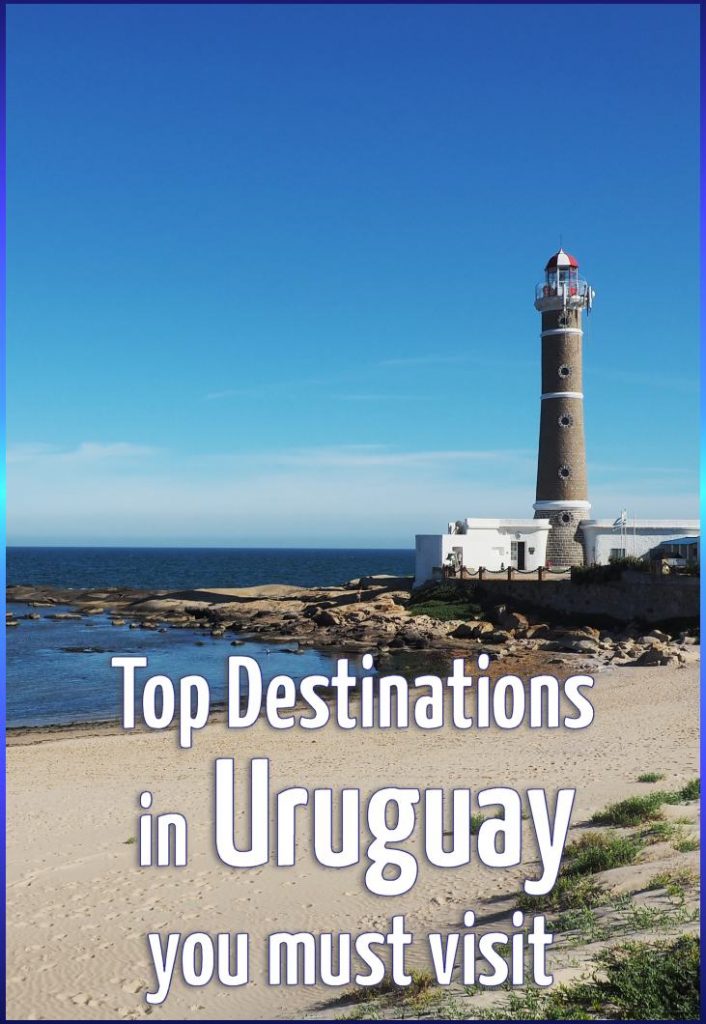 Yasha is from Australia and travels full-time with her husband, Juergen, who is German-born, but now also Australian. They started their adventures through North and South America in 2006 with a pick-up truck and a slide-in camper. In 2009 they returned to their ‘normal’ life in Australia, but were soon planning their escape! Currently they are travelling through Brazil in Berta, a house on wheels that they built together, picking up where they left off in South America. You can follow them on http://dare2go.com