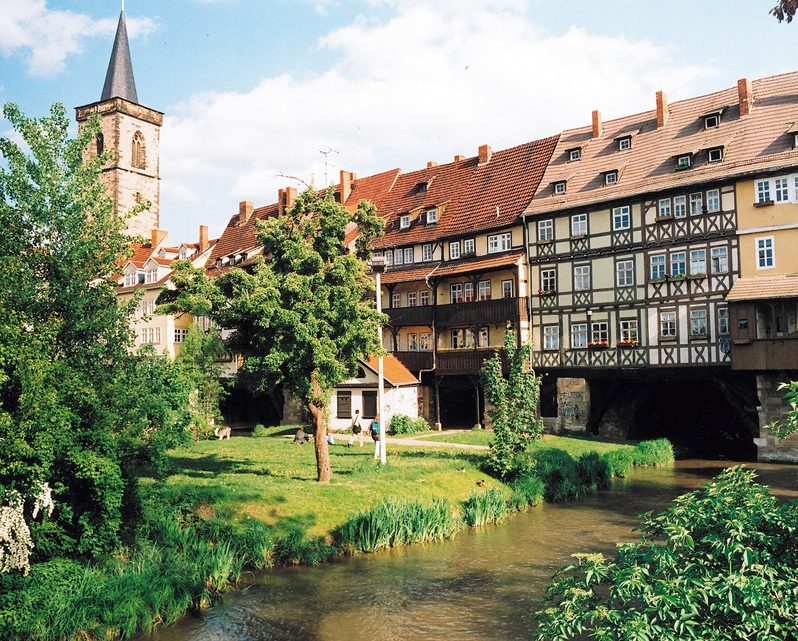 For those travelers to Germany looking to expand their horizons beyond the major cities consider booking a day trip to Erfurt. This Central Germany town that was first mentioned in the history books in 742 by St. Boniface still retains a medieval air as it was one of the cities in Germany that remained intact post World War II.

This town possess the ambiance of a small town while having the cultural amenities commonly associated with a large city. Here one can walk around this town without jostling with the crowds typically found in larger cities.

Start your day with breakfast at Café Füchsen, a cozy little café located in a historic building in the Old Town next to Merchants’ Bridge. Relax with a cup of coffee as enjoy the greenery and the small river that winds around the city. In particular, check out their homemade cakes.

After breakfast, pick up an I-Guide from the Erfurt Tourism and Marketing Board. This I-Guide resembles and iPod and allows tourists to embark on a walking tour of Erfurt’s major attractions. Choose from an English or German version depending on your familiarity with the German language. So you don’t have to rush and return the item, check the I-Guide overnight at a cost of 10.00 €.

Now set out to explore the Merchants’ Bridge (Krämerbrücke), the longest series of inhabited buildings on any bridge in Europe. Originally 62 narrow buildings graced this bridge’s 120-metre length, but due to subsequent redevelopment only 32 buildings remain.

Take your time strolling along the bridge taking in the myriad of boutiques, galleries, and cafés along the way. Be sure to photograph the series of locks found chained to the iron railings. These are left by lovers as a sign of their affection for each other Then head over to Cathedral Square and check out St. Mary’s Cathedral. This late Gothic Cathedral sits on the site of the church that was built for Bishop Boniface in 742 and houses the world’s largest medieval free-swinging bell. If you’re hungry and need a cheap snack, pick up an original Thuringian ”Bratwurst” at the small grill stall on Cathedral Square.

Also, if you have the time, check out the other regional produce such as fruit and vegetables available at the square’s daily market which is open until 2pm. This market serves as one of the reminders of this city’s history as a central hub for world trade.

Then check out the Old Synagogue, a site that serves as a reminder of Erfurt’s role as one of the most influential Jewish communities in medieval Germany. This synagogue is one of the very few preserved medieval synagogues in Europe that has been restored and reopened in 2009. Among the treasures on display here include about 6,000 works of goldsmiths from the 13th and 14th century.

Also, be sure to stop by the Church of St Severus. This five-naved early Gothic hall church is one of Erfurt’s most famous landmarks. In the 12th century, this church served as a collegiate church for the regular canons of St Augustine and reminds visitors of this city’s medieval past.

Follow this visit with a tour of the Protestant Augustinian Monastery. This holy site built around 1300 housed its most famous Augustinian monk, the Reformation leader Martin Luther. This monastery is now used as a memorial to Luther. For a truly unique experience, consider spending the night at this ecumenical conference center. Their guest accommodations that have the distinct atmosphere of a historical cloister but are modernized enough that one can have a comfortable night’s stay. After an extensive exploration of the city, it is time for dinner. Take a fifteen minute walk to the Petersberg Citadel, a unique ensemble illustrating European fortress architecture in 17th to 19th century with a Baroque core (1664 – 1704). Have an evening bite at the”Glashütte” which is directly located on the top of the Citadel. As enjoy the meal, sit back and enjoy the sunset setting from the view of the Citadel.

Conclude the evening at the Michaelisstraße, which located in the old town just five minutes away from the monastery. In this section of time, one can find many opportunities to have a drink in the evening, After a nightcap, return to the Augustinian monastery for a night’s sleep before leaving the morning. As you depart, be sure to return your I-Guide to the Erfurt Tourism and Marketing Board.

For additional information about booking a trip to this town, log on to the Erfurt Tourism and Marketing Board’s website.