Swimming with Whale Sharks and Basket Weaving in Cebu 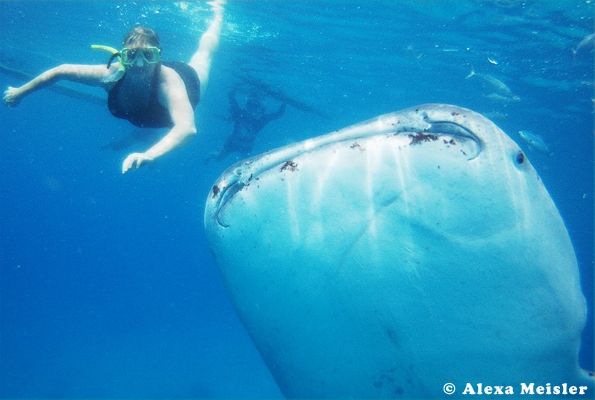 It’s not often a perfect day includes swimming with whale sharks, visiting an amazing food market and meeting a third generation basket weaver. On my trip to Cebu, I was able to do all of this and stop at a shoe factory and pick up a pair of super cute sandals.

Cebu is a province and island located in the Visayan islands of the Philippines. The province includes many towns and for this perfect day, it required a bit of driving, which allowed me to see more of Cebu. During my visit, I stayed at the Bluewater Resort, which is located on Mactan Island in the province of Cebu and next to Cebu Island.

The plan was to wake early to meet a driver who would take me to Oslob and the home of The whale shark. It’s a three-hour drive from Mactan, but I was determined to have this once in a life time experience.  To be honest, swimming with whale sharks wasn’t on my radar until I interviewed Amanda Castleman for my Break Into Travel Writing podcast. During our interview, she mentioned that one of the top things she wanted to experience was to swim with a whale shark and when she found out I was on my way to Cebu, she had me promise I would visit Oslob to make the swim and snorkel.

The Whale shark is the largest living shark, therefore, the largest fish in the world.  Before I get to the whale shark, I need to share an interesting fact about driving in the Philippines. There is a definite method to car passing and honking. I’d say, compared to what I am used to in the United States, it’s fairly aggressive. I have driven in many foreign countries including on the other side of the road (thank you England, Ireland and Scotland) and have never been so happy I was the passenger and not the driver.

After three hours of honks and car passing, we arrived in the SE Cebu province of Oslob; a small town once mostly comprised of fisherman. A few years ago some fishermen noticed the whale sharks appearing and these giant fish now call Oslob home. Many of the local fishermen are now shark guides and many others now operate restaurants that line the beach front.

Once we arrived at the whale shark cove, there is a mandatory briefing about the sharks and the rules that must be followed.

We were then organized into small groups and made our way to an outrigger canoe with two guides who rowed us out to the edge of a buoyed area.  The whale sharks come into the cove each morning about 6am to feed on shrimp that is fed to them by the guides.

Once we were out far enough – we could jump out and snorkel or view the fish from the canoe. Of course, I jumped in. I had also paid the guide to take some photos of me underwater with the sharks. I’ve snorkeled with dolphins and fish, but the size of the whale shark was overwhelming at first. As I adjusted to sharing the water with these massive sharks, I could begin to observe them and watching them glide thru the water was beautiful. They were so comfortable around swimmers, they even passed close enough that they touched me several times.

While the whale sharks are huge, their throat is small, which is why they are fed the shrimp. Even though their mouth is big enough to easily swallow a person their throat is not. While their size was incredible, I didn’t feel scared. It was really more a feeling of awe. 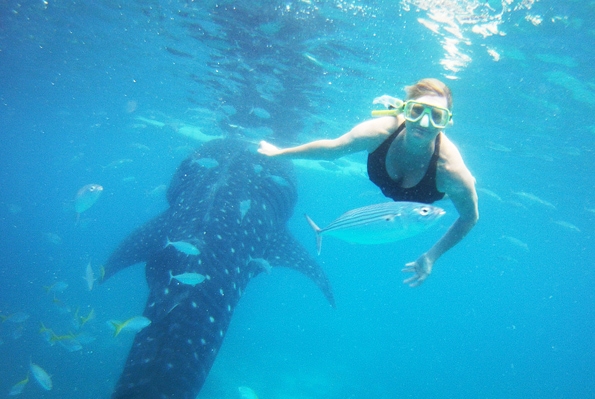 After swimming with the whale sharks we headed to one of the beachfront restaurants. There are about six restaurants lined up side by side on the sand. We ate at Mother Teresa Eatery and enjoyed an amazing lunch of four courses. 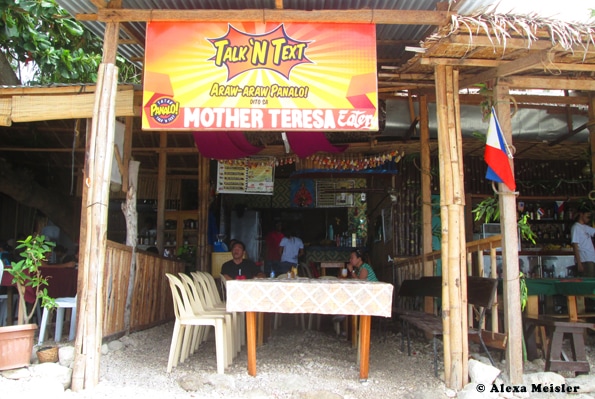 Our first course was a fish soup called Tinola. This was one of my favorite foods from the entire trip. 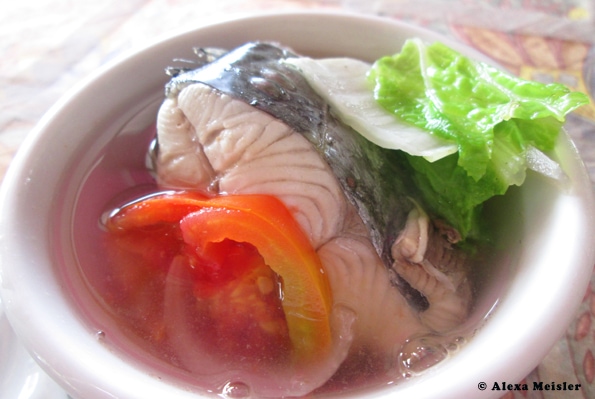 We also enjoyed pork belly, which is called humba, milk fish known as sugba, as well as kimilaw which is also called Filipino sushi. It is a raw fish salad with vinegar, chili, onion, ginger and calamansi juice. I loved every meal in the Philippines. Not only is the food delicious, but the fact meals are family style allowed me to try many dishes at every meal. 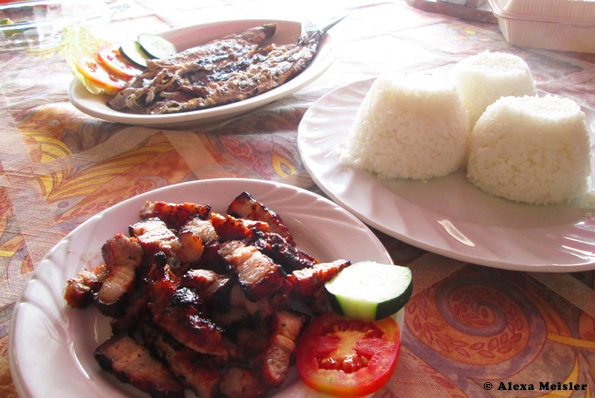 Pork belly, which is called humba in the Philippines 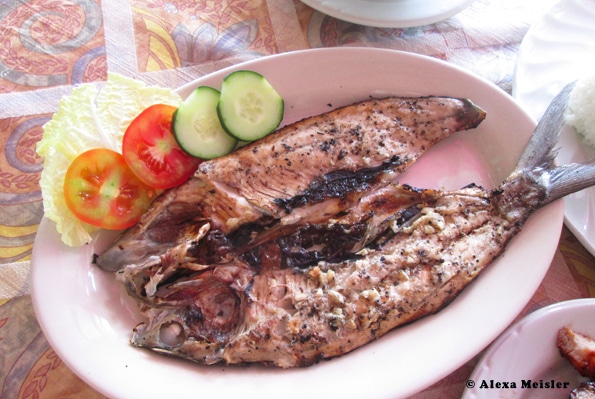 Milk fish known as sugba in the Philippines.

On our way back from Oslob, we stopped in the town of Carcar. The town of Carcar is a Spanish settlement and many of the houses are considered historic sites. It is also home to a beautiful church built in 1859.  The town is famous for its shoe outlet and a public market where they sell every kind of Filipino food you can imagine. You can find everything from lechon – whole cooked pigs, to ampao rice bundles, all kinds of fish, vegetables, more rice varieties than I knew existed, many types of seaweed, the Filipino version of Rice Krispy treats and of course chicaron at the Carcar Public Market. I could have spent all day there taking photos. 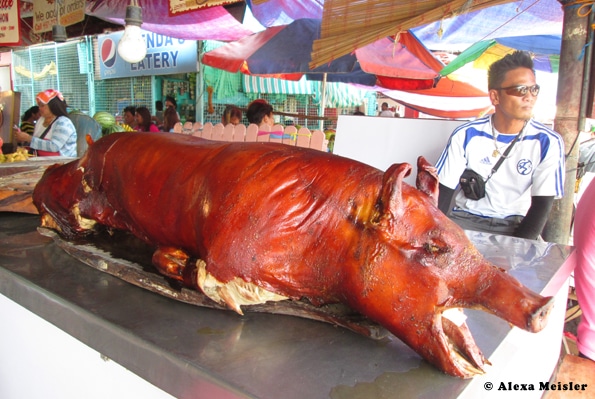 After the market, the guide took me for a basket weaving lesson. Now, you might think basket weaving doesn’t sound very interesting, but if you get a lesson from a 3rd generation Filipino who was taught by his grandmother and makes a living creating them by hand in just minutes, it becomes a really fascinating experience. Even more fascinating was driving up to his home and seeing his 10 kids and a good dozen chickens running around the front yard, while he and his wife lounged in a hammock. 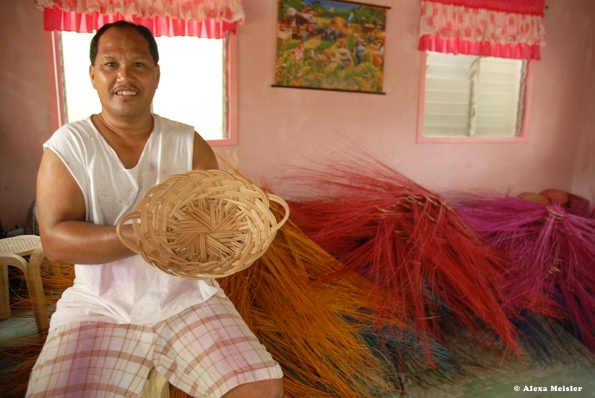 On our way out of town, we made one last stop at the shoe outlet. This is the one regret I have from this trip. I only bought one pair of shoes. The shoes in Carcar are at least half the price that you will find in Cebu city. Most of the people selling shoes in the city, come to this outlet to buy their inventory.

I loved my visit to the Philippines. The people were friendly and it was easy to communicate because the majority of the locals speak English. And of course, there is the food and the beautiful beaches.

Read More About the Philippines and other Great Asia Destinations

World’s most luxurious private islands you can rent