A Day on the San Diego Bay 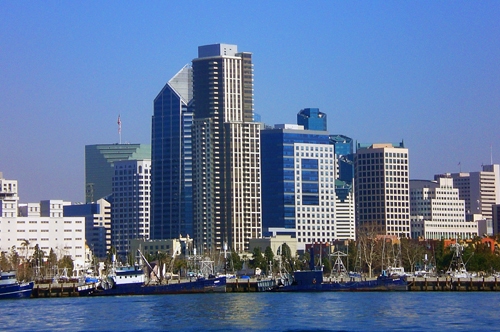 On one of San Diego’s many glorious sun-filled days, one of the best ways to experience its beauty is to follow the lead of the locals and get out onto the water. If you don’t own your own nautical vessel, not to worry, a two-hour Hornblower Harbor Cruise is a great option to enjoy the water and soak up some sun.

Bring your sunglasses, a camera, binoculars and a windbreaker and head out for a day on the bay.

Start your morning with coffee and a bagel at Brickyard Coffee & Tea. Located on G and Kettner Boulevard, this coffee shop is about half a mile from the Hornblower ticket office and offers the perfect way to include a brisk morning walk before the cruise.

For a more substantial breakfast (and don’t worry, the harbor waters are calm enough to ensure you don’t lose it), try one of these close-by restaurants: Hash House-A-Go-Go in Hillcrest or Hob Nob Hill on Banker’s Hill. Both are renowned for their breakfasts and a treat to visit early in the morning.

Next, head to Harbor Drive, where you will find the Hornblower ticket booth and boat slip. Once onboard, explore the two levels of the ship, buy some coffee, or relax on the bow where there is ample seating. The top-level is enclosed, quiet, and offers lots of tables and chairs. The outside upper deck is very scenic but can be a bit windy, while the lower deck is less exposed to the elements. The windows are spotless, so staying inside guarantees a great view.

Upon departure, the boat will offer a blast of the horn (‘Hornblower’ Cruises indeed) and, if you are outside at this moment–beware. As the boat pulls away from the quay in what is called Chowder Cove, ogle the mammoth cruise ships that are always parked in the harbor.

On the north side of the ship check out the Star of India: an 1863 sailing ship that has survived hurricanes, mutinies and groundings, which has now come to rest as a part of the San Diego Maritime Museum. Also in view is the HMS Surprise (upon which the film Master and Commander was shot), a 1972 Cold War-era Russian submarine that nearly surfaced in this harbor underneath the U.S.S. Midway aircraft carrier, and a classic river steamboat.

The two-hour tour travels to the mouth of the harbor near Point Loma where sea lions are found bathing in the sun, and then down the southern finger of the harbor, while the one-hour tours focus on one part of the harbor or the other.

On the way to Point Loma on the north leg of the tour, the captain will point out a large bait barge where a group of sea lions love to lounge. It’s said that these playful bewhiskered animals are sometimes mistaken for dolphins when they “porpoise,” or jump out of the water, but at this point in the San Diego Harbor, you will most likely to see them basking in the plentiful sunshine.

This is where the explorer who founded San Diego, Jose Cabrillo, sailed into the harbor during his explorations of the West Coast. The harbor is so vast however, that he sailed southward into it and lost his way, grounding his ship several times before turning around and leaving. His biggest blunder was assuming that the southern tip of the San Diego Harbor was a secret water-passage to the Atlantic Ocean.

As the cruise continues it will pull up just before the mouth of the harbor lets out to the open sea and then head back to Chowder Cove. This is a great time to soak in the view and feel the wind at the bow as you head into drop off the one-hour North Bay passengers and pick up the South Bay passengers. From here the ship will head quite south indeed, so far that you can spy the hills of Tijuana only eight to ten miles away.

If you are a fan of naval ships, you are in for a treat as you come upon the U.S.S. Midway, a docked aircraft carrier now permanently open for public tours. You will also pass the ferry station on Coronado and underneath the impressive Coronado Bridge. Originally, the bridge was mapped out to be 1.8 miles long, but when the planners discovered that all bridges over 2 miles receive government funding, the original plans were scrapped. The bridge now boasts a long 85-degree S-curve in the middle, making it just over 2.1 miles long.

After the boat tour, head to the famous San Diego fish restaurant Anthony’s Fish Grotto for lunch. Just 500 feet north of the ticket booth on Harbor Drive. One of San Diego’s oldest waterfront restaurants, it is very popular with locals and has been voted San Diego’s Best Seafood restaurant 11 years in a row by the readers of the San Diego Union-Tribune.

Order your favorite seasonal fish and make sure you get it grill-broiled the original way, with Anthony’s signature breading technique (lightly breaded, simultaneously flame-broiled and grilled to seal in the flavor). The oysters on the half shell are fresh and served with a side of horseradish and taste great paired with a glass of house white wine. Ask for a window table where you can gaze out on the waters you just explored.

After lunch, visit the Cabrillo Monument and museum at the tip of Point Loma for a beautiful view and a closer look at the famous Spanish explorer, or head to USS Midway Museum where war buffs, veterans, and students will enjoy touring the huge flat deck of the ship and its myriad control rooms, but make sure to devote at least three hours to see the Midway, as it is gigantic. You can even spend the night there on select summer evenings! Then visit the San Diego Maritime Museum, where you can learn about the vessels you saw as you left the dock at the beginning of the Hornblower tour and to round out your nautical adventure.

For dinner head to Shelter Island’s Bali Hai to enjoy some Polynesian fare. You may have spied the roof of this famous restaurant during north leg of the Hornblower tour, which is adorned with a huge statue of King Kamehameha. This and other restaurants in the area are immensely popular with the boating crowd, since all offer tie-ups at their docks. Start with lobster wontons or the volcano pupu platter featuring little samples of a lot of appetizers. For entrees try one of the many flaming wok dishes or go for one of their classics such as shrimp in Bali Hai sauce or Kapahulu steak, a New York strip grilled with shiitake cream sauce & topped with fried onions.

Of the many ways to enjoy San Diego, time on the bay in this sailing-obsessed city is an exhilarating experience. Followed by a visit to Cabrillo Monument, a tour of a few ships and topped off with some excellent seafood selections at some of San Diego’s best waterfront restaurants makes for a totally nautical experience.

Head towards downtown San Diego. Take Harbor Blvd. South to Broadway and turn left for parking. There is plenty of free street parking south of the train station on Kettner and the surrounding side streets if you get lucky, but if you forgot your rabbit’s foot today then you’ll need to park in a public lot. Take your pick from the expensive lots that line Broadway, which can range from $8 an hour and up.

Helpful Hint: A quick guide to nautical terms will help you better understand the tour: bow=front. Stern=back. Starboard=right hand side. Port=Left hand side.

Of Note: In January 2008 Hornblower Cruises and Events switched to bio-diesel fuels, which are made from the glycerin in vegetable or animal fats, making your voyage environmentally friendly and reducing your carbon footprint for the day.

Emily Mayer is a San Diego native currently writing and teaching English in South Korea. She graduated from the University of Redlands, California with a degree in Creative Writing. Emily and her husband Steve love traveling the world and exploring new places. She can be contacted at emily.mayer@gmail.com

About the Author Emily Mayer

Emily Mayer is a San Diego native currently writing and teaching English in South Korea. She graduated from the University of Redlands, California with a degree in Creative Writing. Emily and her husband Steve love traveling the world and exploring new places. She can be contacted at emily.mayer@gmail.com