Hawaii’s Angels of the Sea 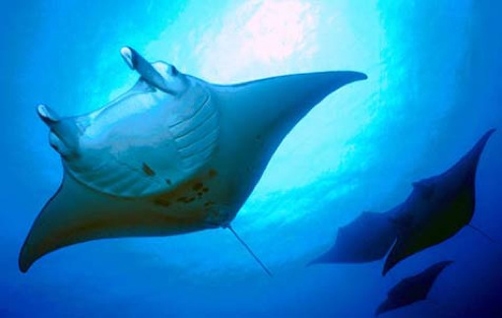 One of the top attractions of the Hawaiian Islands is the spectacular natural setting: breathtaking coasts and cliffs, awe-inspiring waterfalls and active volcanoes, and one of the most unique eco-systems in the world. The Pacific Ocean waters surrounding the chain of islands formed millions of years ago by erupting volcanoes – that are still adding land today on the Big Island – are filled with diverse life including green sea turtles, humpback whales, spinner dolphins, and the giant manta rays.

All kinds of water activities are popular in Hawaii, from surfing, kayaking and sailing to diving and snorkeling. But one of the most unique, beautiful, in fact almost mystical ocean encounters one can have anywhere has to be night diving or snorkeling with the mysterious giant manta rays. The Travel Channel calls the Manta Ray experience one of the “Top 10 Things to Do in Your Lifetime.”

Just off the Kona Coast, a community of the rays feeds on plankton just offshore each night, drawn by the lights that spill out over the water from the viewing terrace of the Sheraton Keauhou Bay Resort. The creatures are gentle and non-territorial, with no barbs or teeth, gliding silently through the waves alongside the scientists, divers and snorkelers who come to observe them. 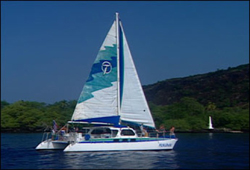 I was invited on such an expedition by Sea Paradise, one of the Big Island’s best outfitters for catamaran snorkel and scuba trips. Eco-tour experts for over twenty-five years, Sea Paradise does not take out huge groups of tourists as many other operators do; but instead limited numbers of guests on their luxurious 46′ sailing catamaran, Hokuhele, into Kealakekua Bay. Sea Paradise takes respect for the ocean’s eco-system and the manta rays very seriously, working in conjunction with experts from the non-profit Manta-Ray Network on each trip.

Captain Chris commanded the catamaran, while Jim Wing of Manta Ray Network led our expedition of five snorkelers and two divers, taking half an hour before we hit the water to educate us about the rays and what our behavior with them should be. The rules included observation only – touching of these delicate creatures can damage their protective membranes; and keeping our legs and arms as horizontal as possible without abrupt diving or kicking in order not to disturb their feeding.

Prepared by both Jim, who has worked extensively with manta rays and dolphins for twenty years including with National Geographic, and our wetsuits and equipment, we slid into the water one by one. Our anticipation was palpable, and there was very little speaking as we set off. The darkness of water and sky lent a completely different feel to the dive than in the daytime; it was at once magical and other-worldly as if we were entering another realm altogether and not the Pacific Ocean a hundred yards from the coast, where I had snorkeled days earlier.

Led by Jim from the catamaran to the pod of feeding manta rays, almost immediately I was enveloped by the giant fish. Their wingspans tip to tip were up to twelve feet, and they slowly flapped up and down as if they were flying through the water. The phosphorescence of the plankton in the lights gave an eerie bluish-white glow to the rays, and suddenly one swam directly toward me, its mouth of whale-like baleen wide open to screen the plankton through. Instinctively I tried to pull back, and the ray circled up toward me and then away, graceful and unperturbed by my presence. It was mere inches away, and I could have reached out and touched it. For an hour we floated in the water along with these magnificent creatures, nine of them by Jim’s count that night, as they circled and dived and glided in our midst. It was truly an experience not to be missed, and never to be forgotten.

What & Where:
Sea Paradise offers daily sails at $89 for adults and $59 for children 4-12, which includes all equipment. The catamaran is also available for private charters. They can be reached at (800) 322-5662 or www.seaparadise.com.

The Manta Network, along with concerned scientists, is mounting a campaign to have manta rays added to the CITIES’ (Committee on International Trade in Endangered Species) Endangered Species list. For more information about manta rays, go to www.mantas.org.

More information about Jim Wing, as well as manta rays, dolphins and green sea turtles,  can be found at Dolphin Dreams – www.dolphindreams.com.

Shelley Seale is a freelance writer based out of Austin Texas, but she vagabonds in any part of the world whenever possible. Shelley has written for National Geographic, Globe Pequot’s Insider travel guides, CNN, AOL, USA Today and Andrew Harper Traveler Magazine among others. Her book, The Weight of Silence: Invisible Children of India, follows her journeys into the orphanages, streets and slums of India where millions of children live without families. Her mantra is “travel with a purpose.” She can be reached at shelleyseale.com.

About the Author Shelly Seale

Shelley Seale is a freelance writer based out of Austin Texas, but she vagabonds in any part of the world whenever possible. Shelley has written for National Geographic, Globe Pequot's Insider travel guides, CNN, AOL, USA Today and Andrew Harper Traveler Magazine among others. Her book, The Weight of Silence: Invisible Children of India, follows her journeys into the orphanages, streets and slums of India where millions of children live without families. Her mantra is “travel with a purpose.” She can be reached at shelleyseale.com.