13 Things You Must Do if You Visit Manchester, England 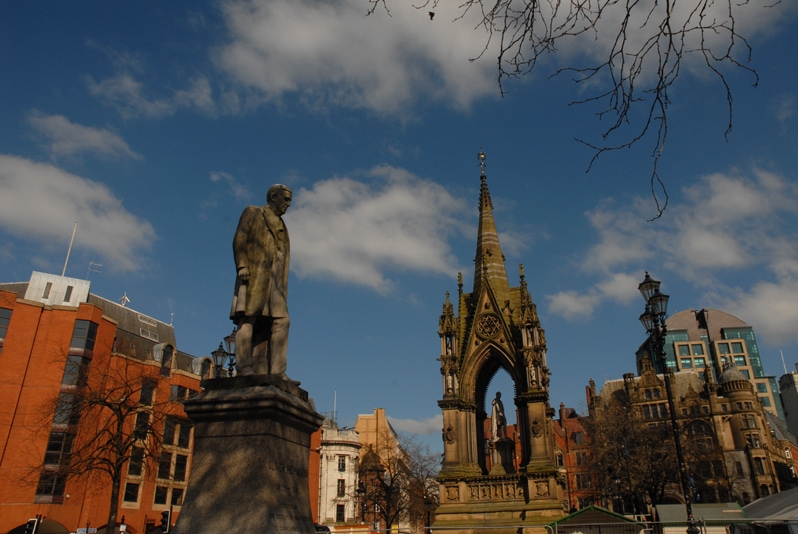 Manchester is a perfect starting point for a Northern England adventure. Whether you want to visit the northernmost town in England; Berwick-upon-Tweed or the medieval town of Durham and it’s famous Cathedral or you want to explore the Beatles museum in Liverpool, Manchester is where you should begin your adventure. Manchester is a walking town and most of the city can be reached with no more than a 20-minute stroll. Manchester is an industrial city with a long history and plenty to explore. If you visit Manchester, England here are my top suggestions of what to do.

TABLE OF CONTENTS show
13 Things You Must Do if You Visit Manchester, England
Visit Albert Square
Dinner at The Midland Hotel
Did you know Mr. Rolls and Mr Royce met at the Midland hotel in 1904 and Rolls-Royce Limited was created?
Explore the Street and Outdoor Art
Did you know that Manchester is the world’s first industrial city?
Attend a Hallé Orchestra Performance
Visit Bridgewater Canal
Did you know 25 Nobel prize winners hail from the University of Manchester?
Visit the Whitworth Gallery
Take a Manchester Music Tour
Explore Chetham’s Library
Did you know that Manchester was the center of cotton world in Victorian times? It once controlled 80% of the worlds cotton.
Head to China Town
Afternoon Tea at Radisson Blu
Tour John Rylands Library
Visit or Shop King Street
Try Vimto

13 Things You Must Do if You Visit Manchester, England

Related Story: 11 Things to Do In Northern England Albert Square is the heart of Manchester. The square is surrounded by restaurants and is a great starting point for a day exploring Manchester. Begin by exploring  Town Hall; a Victorian, neo-gothic municipal building that is free to tour. The architecture, paintings, walls and floors, furniture, halls and alcoves make it a fun building to explore. Then head to the square itself to check out the clock tower and many statues.

Dinner at The Midland Hotel The Midland is the most famous hotel in Manchester. Whether you visit the newly opened Mr. Cooper’s for dinner or simply take a stroll through the lobby, this is a must visit hotel. It was originally built as railway station hotel and opened in 1903. Once upon a time, the Beatles were famously refused seating in the dining room because they were not appropriately dressed. Mr Cooper’s restaurant is the main dining in the hotel today and is located where a prominent Manchester resident, Thomas Cooper’s house and famous gardens sat on the site in 1819. The restaurant honors the original garden with a cascading wall of plants and 30ft tree that sits in the middle of the restaurant. Chef, Simon Rogan has created a menu focused on light, fresh and innovative dishes and service that is refined and attentive.

Did you know Mr. Rolls and Mr Royce met at the Midland hotel in 1904 and Rolls-Royce Limited was created?

Explore the Street and Outdoor Art You can find beautiful murals around Manchester as well as more classic sculptures and monuments. The city is very walkable, and you quite literally don’t know what you will find around the next corner. Did you know that Manchester is the world’s first industrial city?

The Hallé Orchestra is one of the oldest and considered one of the best in the United Kingdom. The Hallé Orchestra gave its first concert in January of 1858 under the baton of its founder Sir Charles Hallé. The Hallé’s home in Manchester was the Free Trade Hall until war broke out in 1939 when the building was bombed in the Manchester Blitz. The Free Trade Hall was rebuilt in 1951 where the Hallé performed until 1996. The home for the orchestra is now the magnificent Bridgewater Hall. When you visit Manchester, England a Hallé performance should be on the must do list.

Dubbed as the worlds first canal, the Bridgewater canal opened in July of 1761. There are over 40 miles of canal and you can find it flowing through Manchester near Deansgate and Commercial Street. It’s a great place for a bike ride or stroll.

Did you know 25 Nobel prize winners hail from the University of Manchester?

The Whitworth Gallery was an unexpected surprise during my time in Manchester. The Whitworth Gallery offers a variety of exhibits, that change regularly. One of my favorites was the Tibor Reich textile exhibit. The museum has several multi-media exhibits including short films. Another favorite was the Ben Rivers movie, The Two Eyes Are Not Brothers. It was filmed in 16mm cinemascope in Morocco and explored the illusion of film making and the art of documentary.

Another short quirky film showing in the center of one of the rooms is below, which is oddly mesmerizing and creepy all at once. Craig Gill, the drummer for Inspiral Carpets is the owner and tour guide at Manchester Music Tours. There are a variety of tours including his flagship  Manchester Music Walk as well as ones that focus on specific bands such as Oasis, The Smiths and Joy Division among others. Craig is a wealth of Manchester music knowledge and this tour is a must for music fans. Chetham’s is a Medieval Library founded in 1653 and is the oldest public library in the English-speaking world. This is a must if you visit Manchester. It’s free and open to the public Monday to Friday 9.00am-12:30 and 1:30-4:30pm. The Library began acquiring books in August 1655, and has been adding to its collections ever since. As well as a fine collection of early printed books, the collections include a wealth of ephemera, manuscript diaries, letters and deeds, prints, paintings and glass lantern slides.

Did you know that Manchester was the center of cotton world in Victorian times? It once controlled 80% of the worlds cotton. Check out the 10 best Chinese restaurants in Manchester on TripAdvisor

Chinatown is located in Manchester’s city center. It is the second largest Chinatown in the United Kingdom and the third largest in Europe. Chinese immigration began in the 1940’s and the first Chinese restaurant opened in 1948. Today there are more than 100 Chinese restaurants listed on TripAdvisor. I think it’s a safe bet Manchester has some top notch Chinese cuisine. If you visit Manchester, a trip is not complete without proper afternoon tea. As well as serving a traditional Afternoon Tea, Opus One at the Radisson Blu offers a gluten free and vegan option. They also offer a Gentleman’s Afternoon tea, with mini Yorkshire puddings, warm pork pie with mini fish & chips, rustic sandwiches and scones.  Along with your tea, you can also add a glass of champagne or pint of beer. Don’t let the title “library” fool you.  John Rylands library is a late-Victorian neo-Gothic building that opened to the public in 1900. It was founded by Enriqueta Augustina Rylands in memory of her husband, John Rylands. This is a must visit spot for architecture and history aficionados.

The library is part of the University of Manchester and houses collections of rare books and manuscripts including the oldest known piece of the New Testament, the St John Fragment. It feels more like a castle than a library as you wander the dark rooms and halls.

King Street is considered Manchester’s most upmarket shopping area; it includes stores such as Hermès, Whistles, Gant, Karen Millen and many others. Although, it’s not necessarily the shop names that will impress because if you enjoy Victorian architecture, you’ll love a stroll down King Street. Vimto is a fruity, drink first manufactured in Manchester in 1908. It’s made from grape, blackcurrant and raspberry, herbs, spices and a lot of sugar. You can find it as a candy, soft drink and even as a draft soft drink in pubs, clubs and restaurants. There is even a Vimto statue in Manchester, located on Granby Row at The University of Manchester

Planning to Visit Manchester, England? What are you most excited to explore in Cottonopolis? Let me know in the comments!

A huge thank you to all of Hotels in Northern England I visited during my trip to the United Kingdom. I was a guest at many of the above-mentioned locations, but as always, all opinions are my own.