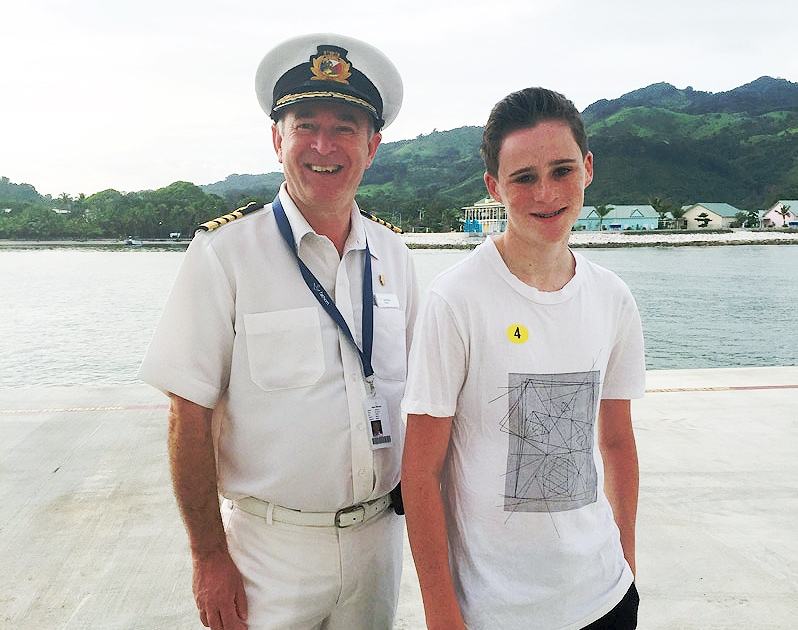 Fathom cruises are a way to experience a vacation while at the same time volunteering and helping people. My mom and I went on the Fathom Dominican Republic Cruise in May of 2016. 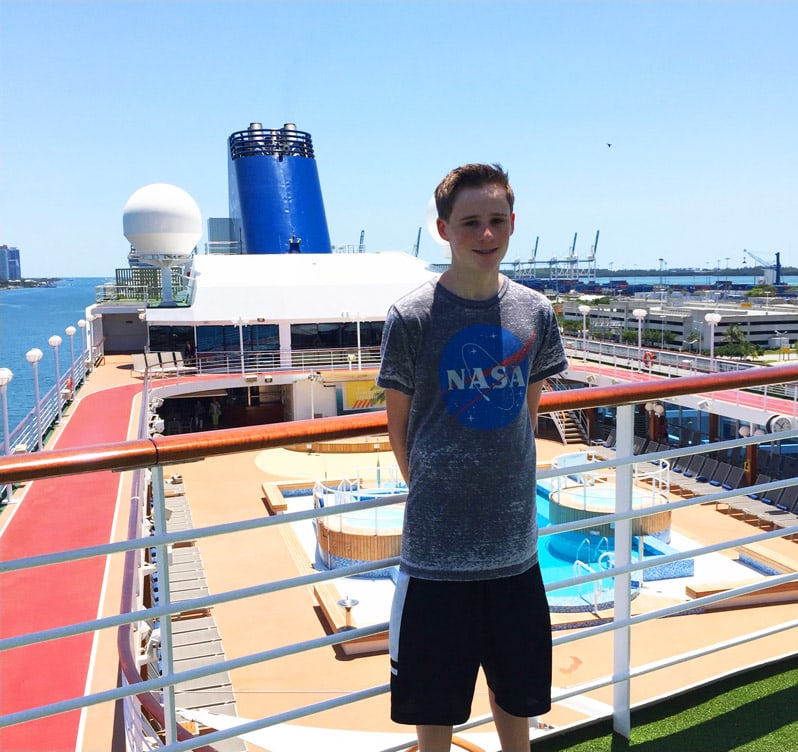 We boarded the cruise on a Sunday in Miami Port and the first thing we did was head to the deck to take pictures and see the pool and view of Miami. Next we went to our room to check it out. Our room was very nice and we had an ocean view. The room was larger than I thought it would be, yet not as big as traditional hotel room. One thing that surprised me was how little time we spent in our rooms. 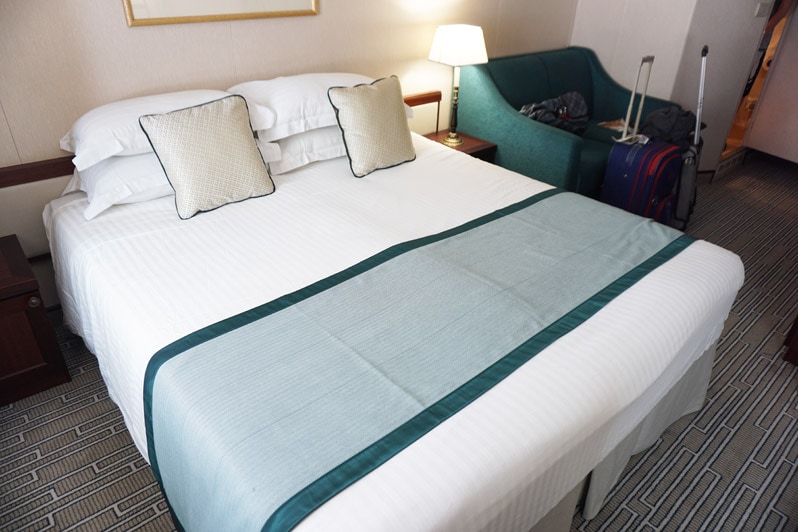 After the emergency drill, we went to the pool and hung out on the deck until we left port. We spent most of the day meeting and talking to people. Our ship was called the Adonia and it was a lot smaller than some of the larger brand ships.

We had dinner in the main dining room which was called the Pacific Restaurant. After that we went back to our cabin for the night because we had flown from San Diego on a red eye and really tired.

Each day we got a schedule of everything you could do. It was called Soundings and it listed the activities of the day. I really liked Soundings because you could choose what you wanted to do and plan out your whole day.

Today we were at sea the entire day, which was fun because the ship is small and I got to meet a lot of interesting people. We also had our first cohort meeting. Everyone on the ship was put into different groups called cohorts. These groups were to help us learn about the culture in the Dominican Republic and about the Fathom impact activities, which were the volunteer activities. The cohort groups met daily during the cruise and today we learned about being a Fathom traveler and how we will impact the communities we visit in the Dominican Republic.

Next my mom and I went to a Spanish class and learned some basic Spanish to help us talk to people in the Dominican Republic. Then we went to the Conservatory Buffet for lunch. I loved the buffet because of the desserts and because you can choose what you want and not have to wait. You can even bring the food to your room or to the pool.

I hung out at the pool and jacuzzi for most of the afternoon, which was fun because I got to talk to my new friends and learn more about them.

Every night they had a movie, trivia, karaoke and other fun things to do. After dinner we went to a trivia quiz. They had a trivia quiz most nights and it was one of my favorite things because the woman who was doing it was really funny and interesting. After that I went to see the movie, which was In the Heart of the Sea.

In the morning we got up, ate breakfast and went to our cohort group meeting. The meeting today was “Getting to Know the Dominican Republic“.

We arrived in port in the Dominican Republic at about noon. The port is located in Puerto Plata and the ports name is Amber Cove. In Amber Cove they had a gift shop, coffee shop, impact learning center and a pool with a water slide.

That afternoon we had our first volunteer activity which was Community English. We met in the Curzon Lounge to check in for our activity and then walked to Amber Cove and got on a bus. There were about 20 other people on the bus for Community English. 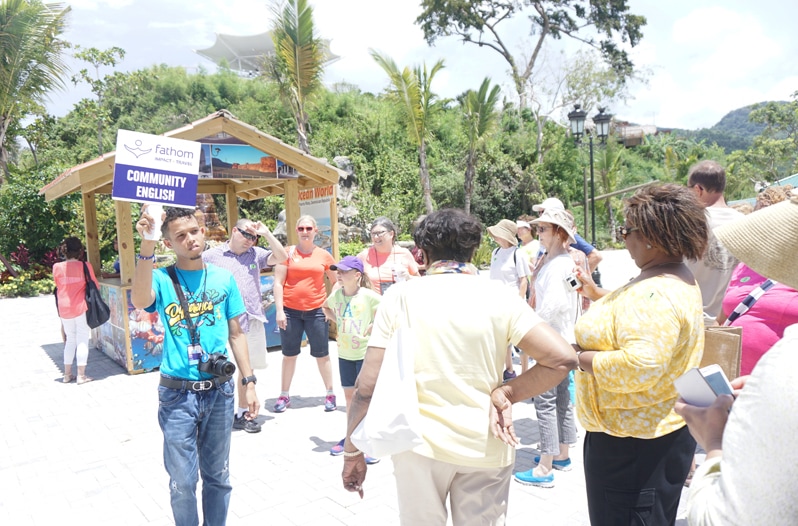 When we got to the village where we were going to teach English the locals greeted us by singing as we came in. After that, there was an introduction ceremony that helped us know how and what to teach.

Next, we broke into groups of two or three people from the cruise with one person from the village. My group was my mom and me as well as two friends we had met on the cruise named Michelle and Frank. We worked with a mom and her son to help them learn numbers and reviewed the alphabet. 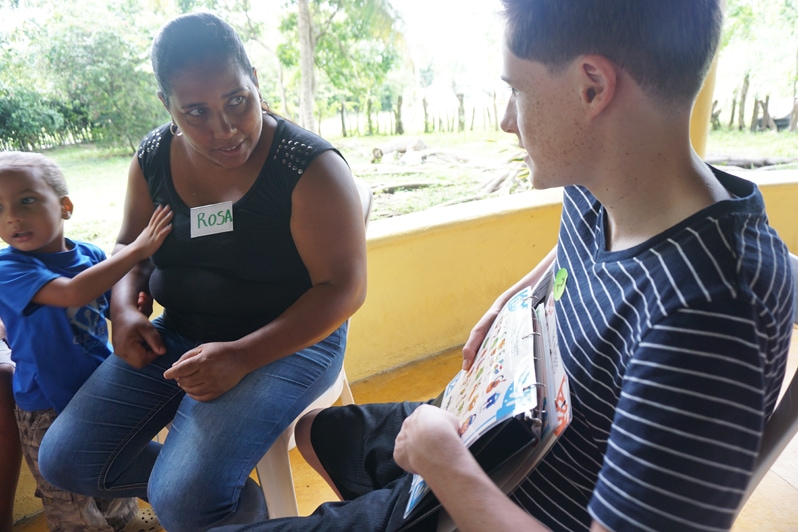 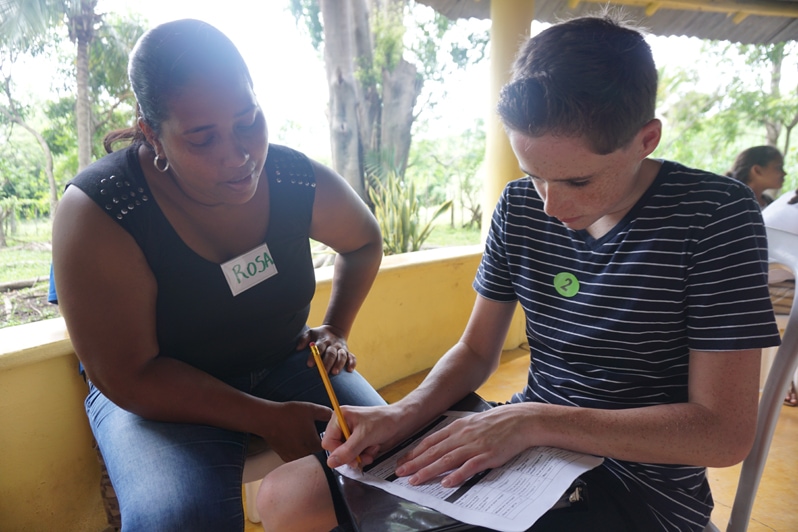 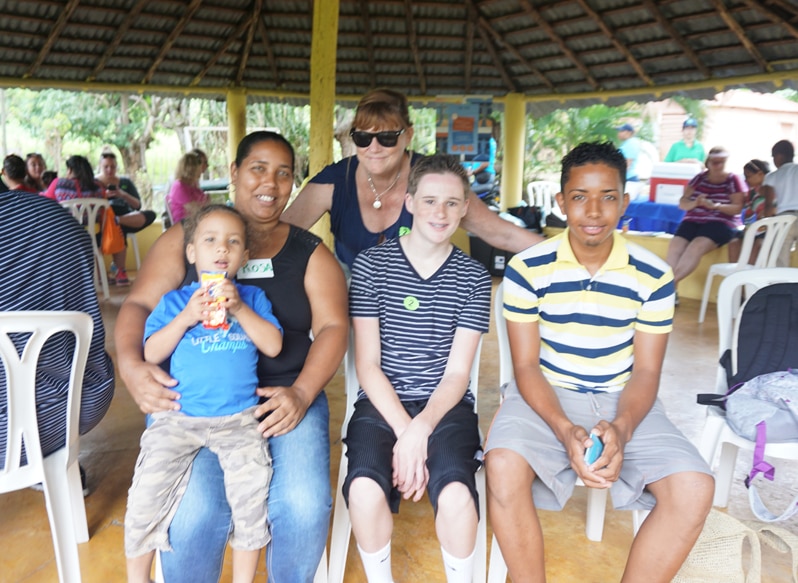 A lot of the people in the Dominican Republic want better jobs and if they speak English they can work at hotels and  other tourist places. The Community English program is set up to work with the same group of people until they learn basic English. So, every time the boat comes into port, they work with the same groups of people.  The way we taught them was with a binder that had all the lessons in it with visual aids like clocks to help them learn more efficiently.

I thought it was cool because we were helping people. I really liked how enthusiastic the people in the village were, it helped everyone else have a great time working with them.

On day four, we woke up early and ate breakfast and met in the lounge to get assigned to a bus for our volunteer activity. My mom and I were signed up for the Recycled Paper volunteer activity. Once we got to the village where the women were working they again greeted us with singing.

We got assigned into small groups with different things to do. Our first group worked on blending old paper with water and then sifting it with mesh frames. After sifting, we shook the new piece of wet paper out of the frame, let it dry for a bit and then used a metal or wood pipe to take excess water out and let it dry in the sun for an hour or two. Then we’d take the pipes and flatten it so it could be written on. 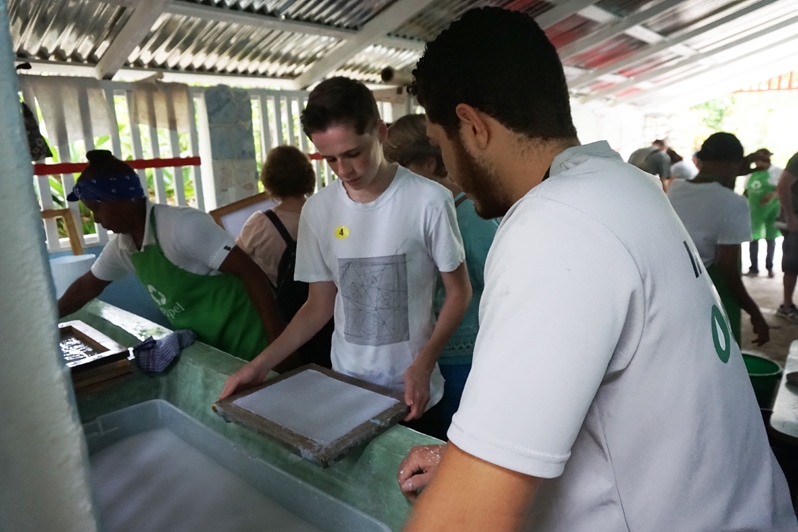 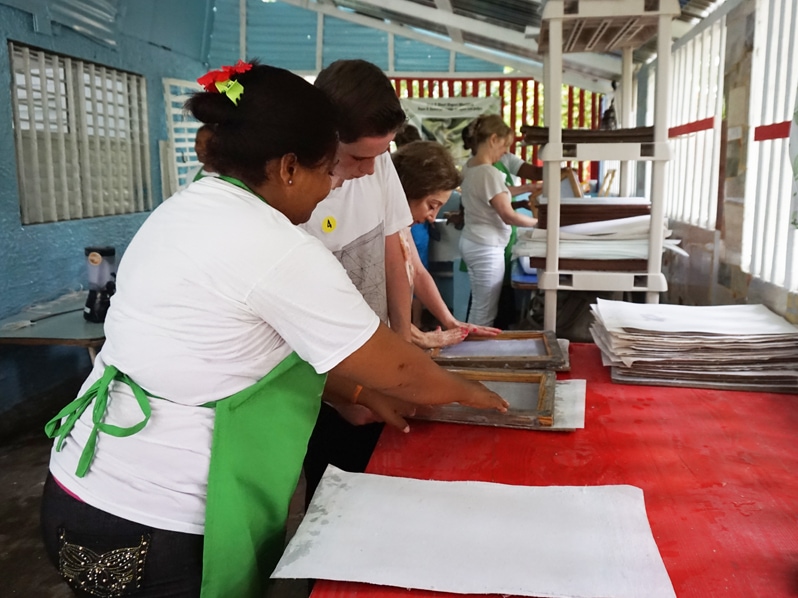 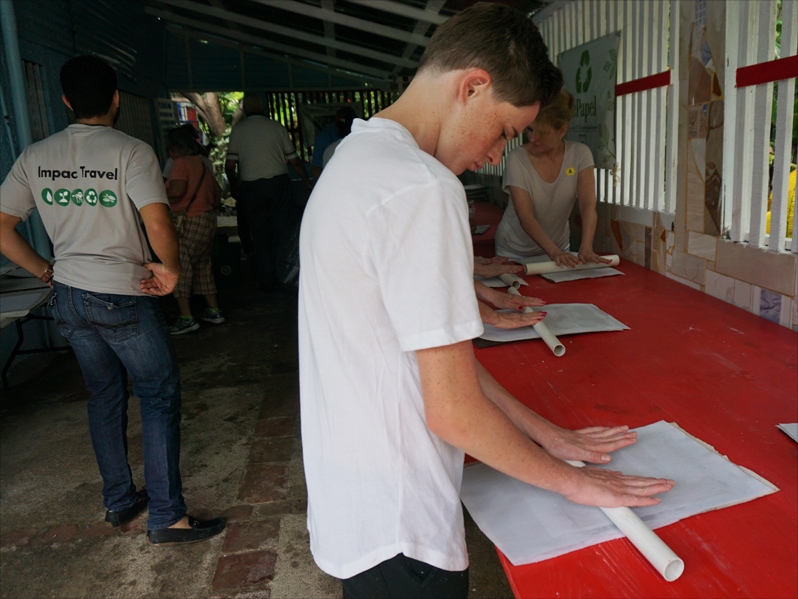 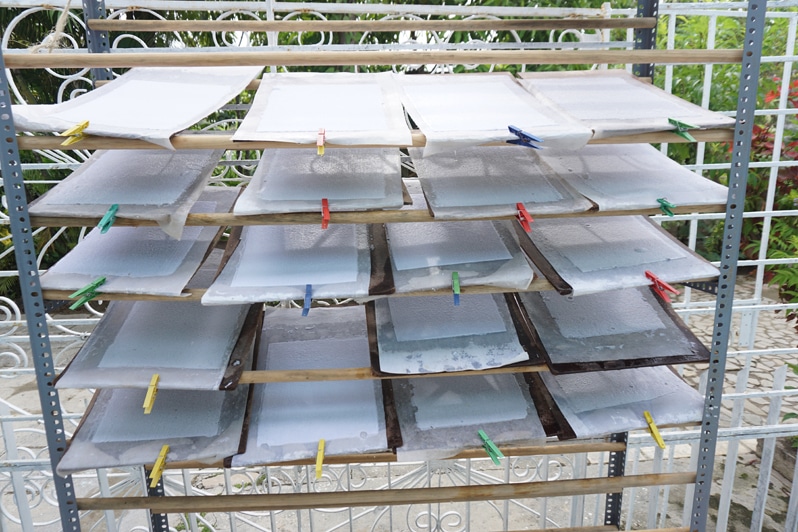 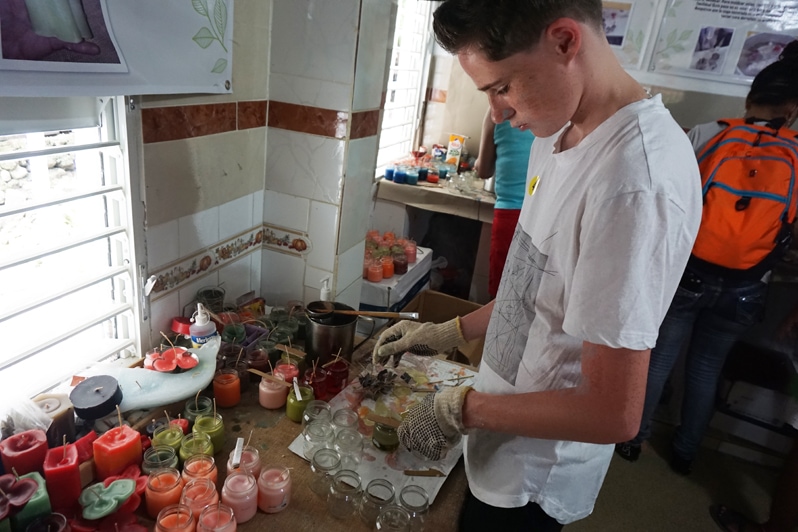 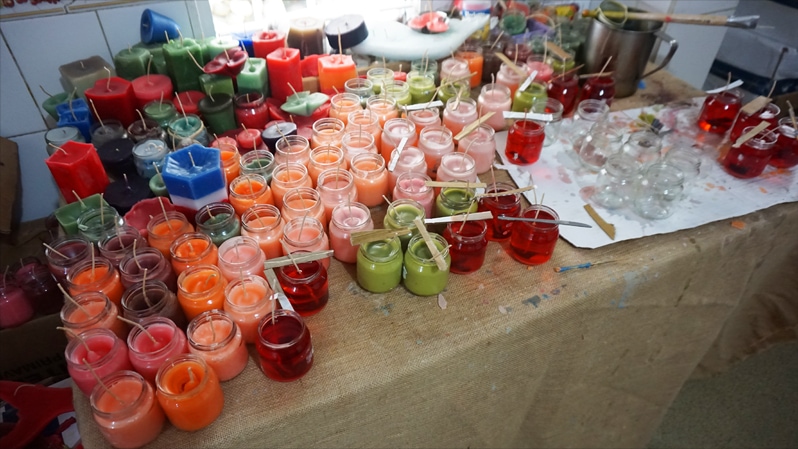 After we finished all the stations we were able to buy paper and souvenirs. I bought four pieces of paper and had all of the women sign it plus our main guide. My favorite part of this activity was how colorful and amazingly happy the women were when we were there. They were so nice and sweet to everyone. 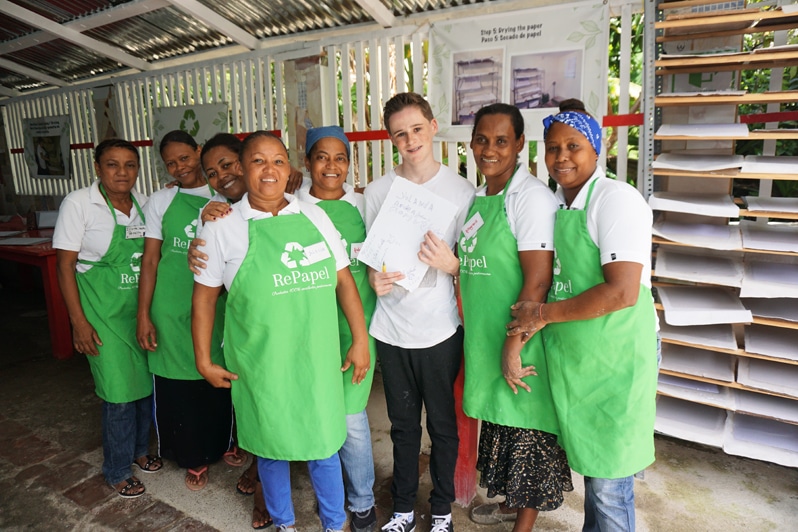 After the recycled paper activity we came back to the boat and had lunch.  In the afternoon we went on a power snorkeling excursion, which was really fun. From the cruise ship, we drove to a beach in Sousa, which is about 45 minutes from the ship. A boat was waiting to take us out snorkeling. When we got there, we met our guides, who were really nice and we saw tons of fish. 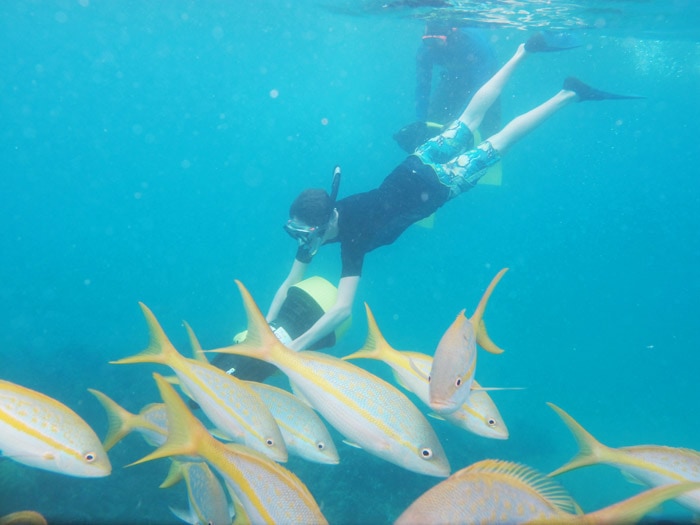 Day five was our day off. We relaxed on the ship and went to Amber Cove for a couple hours. Amber Cove is off the ship, but really close. In Amber Cove, they have a pool, waterslide and zip line. The zip line was a really cool experience because you zipped over the pool and could see the Fathom Adonia ship and ocean.

Day six was our last day in Amber Cove and I decided to do the Student English impact activity and my mom did Reforestation for our last volunteer activity. Student English was very fun because the kids were super nice. They really wanted to learn English and were really committed. We were there about four hours and I taught a group of two boys English and I got to play basketball with a few of the kids.

After the morning impact activity, we went back to the boat and left port in the early afternoon. I felt like I made some friends during the impact activities and wish we could have stayed in the Dominica Republic longer. 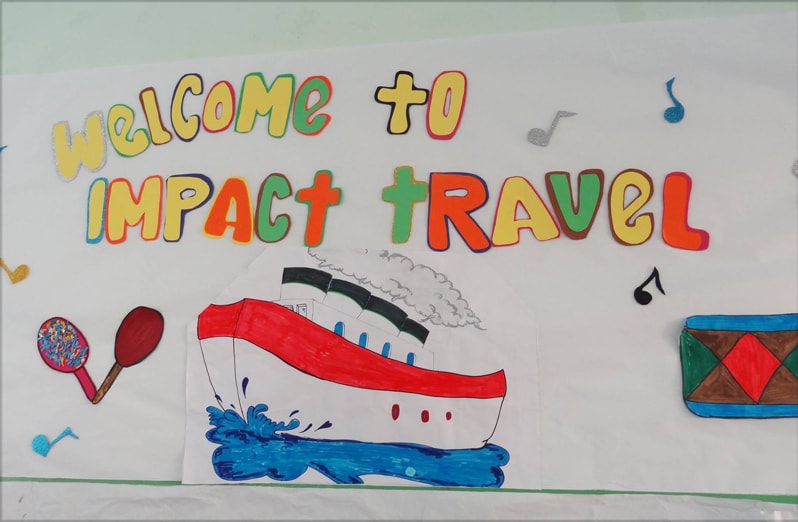 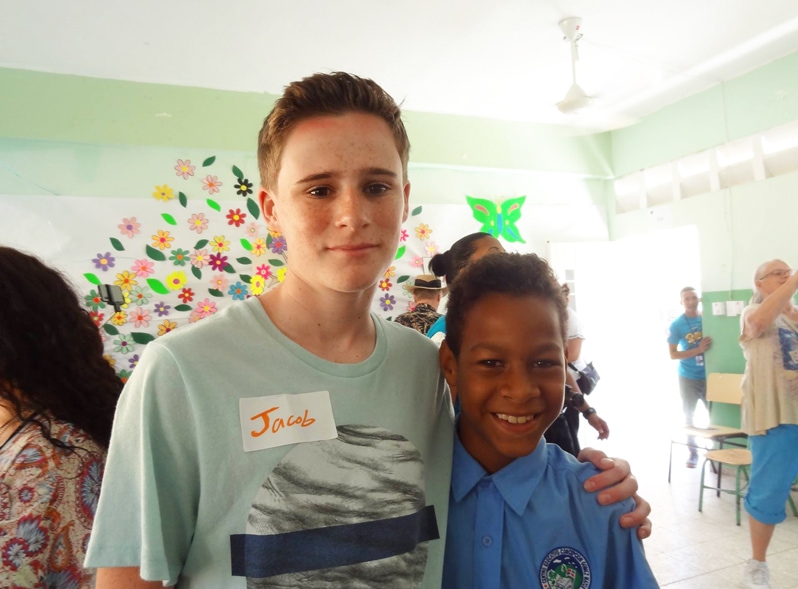 Today we were at sea the entire day. I spent most of the day with the new friends I met on the cruise. We hung out at the pool most of the time and took a lot of trips to Conservatory Buffet.

Why a Fathom Cruise is Cool for Kids: The Fathom Dominican Republic Cruise is a great experience for kids because it shows what good a life we have compared to many other countries. It also helps us learn about people less fortunate and how we can help people in the Dominican Republic have a better life.

If you liked this article you will probably want to hear about when I went Power Snorkeling in the Dominican Republic!

Heading to Sosua? Check out current hotel reviews on Tripadvisor.

Thinking of taking a Fathom Cruise?

My mom has a special affiliate link that can save you up to $150 per person! This link will take you to the Fathom Dominican Republic Cruise discount! https://www.fathom.org/Insider 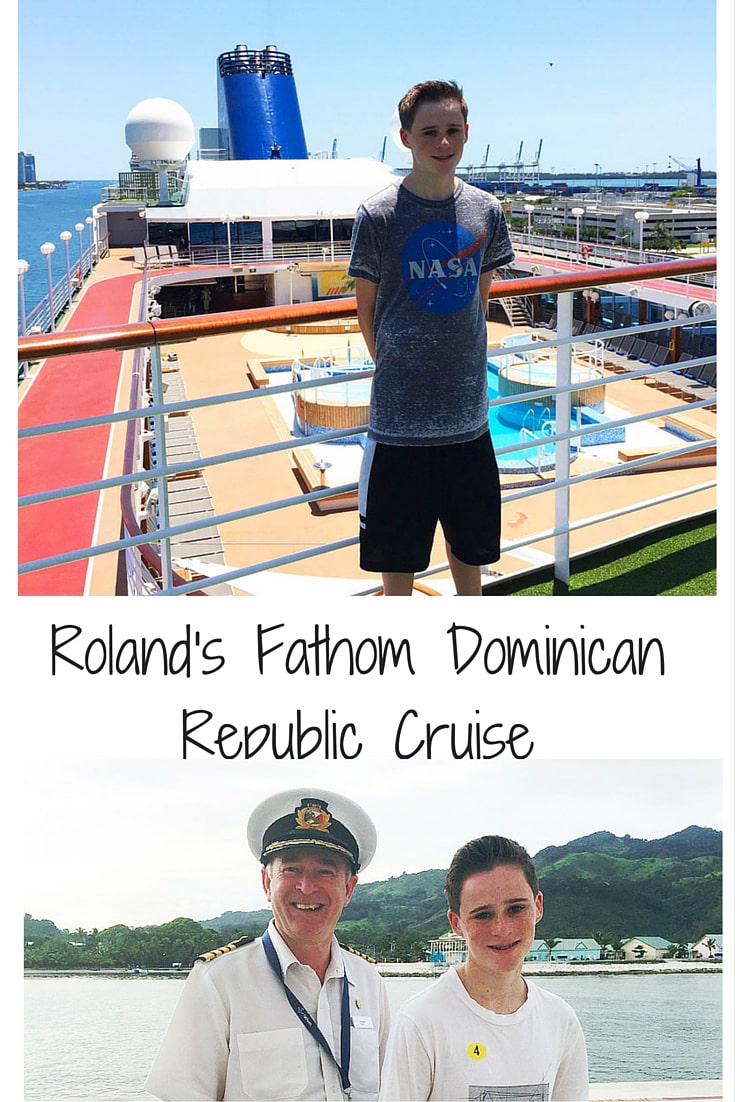 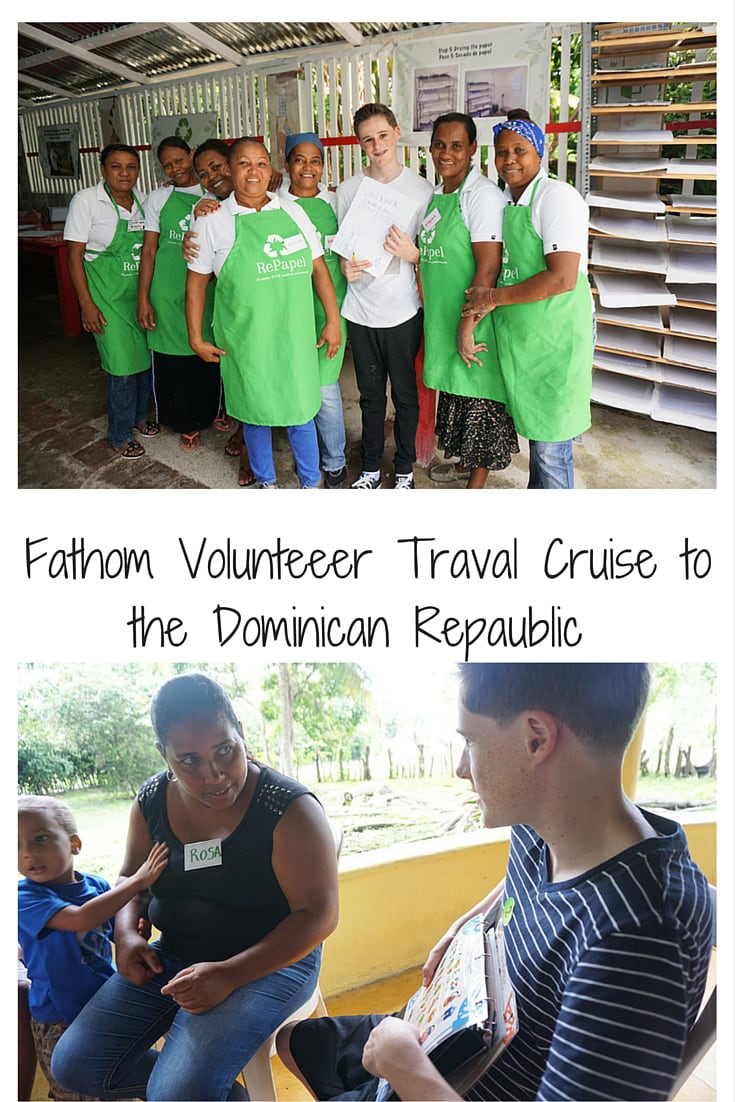