Many cities pride themselves on a certain regional meal. Philadelphia has cheese steaks; New York has pizza; Seattle has Pan-Pacific fusion. We have brunch.

Many cities pride themselves on a certain regional meal. Philadelphia has cheese steaks; New York has pizza; Seattle has Pan-Pacific fusion. We have brunch.

Not to say that Portland doesn’t have a wide-ranging foodie culture, or to disparage the brunches of our neighbors. But Sunday morning calls up a near-religious fervor in the Rose City – not so much for the Lord’s supper as for his sustainably-raised bacon.

Sleepy-eyed, we shuffle in to the city to sip coffee and read the paper, waiting to be called for artichoke and kale omelets, for poached eggs, for cornmeal pancakes and yes, for more coffee. You’ll be joined by half of the city on a typical weekend brunch, so expect a wait. Luckily, Portland has no shortage of delicious restaurants to meet the demand. Here are a few standouts from across the city.

The daily cafe – NW, Pearl District
The chic hustle of the Pearl doesn’t exactly call to mind a leisurely Sunday brunch. But amid the spas, shops, and rising condominiums, the daily cafe has found a niche. Light and welcoming, the cafe blends bright colors – oranges, reds, and greens – with modern, minimalist lines. The cafe serves up a blend of comfort and creativity. Brunch appetizers focus mostly on prepared fruit, such as broiled ruby red grapefruit with a rum sugar glaze. The Arabesque Parfait – yogurt with dates, pistachios, and cardamom green tea syrup – whets the appetite without filling it. Migas a mi manera satisfies with rich flavors and varied textures; crushed tortilla chips add a crunch to the bean, egg, and chili mixture. While you wait for a table, order a cappuccino and pastry from the front coffee bar.

Fuller’s Restaurant – NW
Breakfast used to be more American. In our country’s cultural memory, before we had personal espresso machines and cold-press coffee, we had the endless refillable cup of roadside joe. Fuller’s Restaurant harkens back to this cultural archetype. Hardly your typical road-trip stop, Fuller’s nevertheless evokes the bygone era of the American diner. Counters snake through the restaurant, dotted with paper napkin dispensers and ketchup. Customers perch on stools at the counters, attended to by friendly waitstaff bearing pitchers of coffee. This isn’t the place to go for culinary surprises; it’s the simplicity of the menu that delights. Try crispy yet tender bacon, paired with a few fried eggs and fluffy hash browns – and don’t forget the endless cup of joe.

Grand Central Bakery – SW, Multnomah Village
Portlanders know that a Grand Central baguette is worth fighting for. You see their eyes gleam in the grocery stores as the coveted loaves begin to sell out. The bakery has become synonymous with high-quality, locally-produced bread. Luckily, even when the grocers sell out, Grand Central can handle you’re your bread-hankerings. With multiple cafes throughout Portland and Seattle, the bakery has become something of a breakfast institution. At the cozy Multnomah Village location, you can order a Tosti (a toasted, pressed sandwich), fluffy biscuit with egg and cheese, or simply a gigantic blueberry muffin, warm from the oven.

Screen Door – NE
Crowds gather outside in anticipation for Screen Door’s weekend-only brunch. Surveying dishes from the American South, Screen Door has some of the city’s most interesting and well-made brunch options. The light, flaky biscuits are among Portland’s best. Don’t miss the sweet-savory explosion of buttermilk-battered chicken on a sweet potato waffle. Screen Door uses a variety of local and organic produce, so their menu alters slightly with the seasons – an important selling point for contentious Rose City brunchers. Toast up your jam jar, order some garden grits, and pretend you’re in Louisiana for a morning.

Gravy – N
Sitting at Gravy feels like sitting in someone’s house. The kitchen, built into the back, seems just the next room over. Part of the casual but hip revitalization of NE Mississippi, this easygoing restaurant has friendly service and immense portions. By immense, I mean gargantuan. A Greco Scramble blissfully doesn’t skimp on the mozzarella cheese, and is heaped with cubes of crispy, thick potatoes; it could easily fill three adults. Gravy hits the spot with its egg-based dishes, optimizing the classic brunch flavors in tasty omelets. 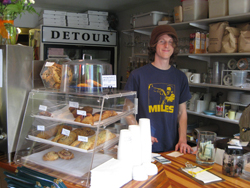 I always associated egg sandwiches with cheap fast-food joints until I found the Detour Café. Portabello mushrooms? Japaleno-artichoke cream cheese? Feta and avocado? I will never speak ill of an egg sandwich again. Simple plates, done with the care and attention of a home kitchen, make this small café a standout. You can design your own frittata or potato skillet, choosing from a variety of ingredients such as manchego, sweet cherry peppers, pepper bacon, and kalamata olives to create a unique breakfast. Try the French toast, thick custard-battered bread topped with a cherry compote. Detour serves sweet, crunchy cardamom bread with most plates, which is nearly as good as the main dish.

Sapphire Hotel – SE
Only one menu item really matters: $10 bottomless mimosas. Big night last night? Orange juice can cure that headache. Looking to start the day with some giggles? Champagne can tickle your Saturday morning just right. Mimosas are fun, classy, and alcoholic, and they come in pitchers. This atmospheric spot (and former brothel) is known primarily for its moody “Oriental” décor, elegant cocktails and romantic evening atmosphere. They recently began serving brunch, and wisely distinguished themselves with the bottomless mimosas. But the food doesn’t suffer while the mimosas run free. Sapphire has a creative menu: the sweet potato and yam frittata, baked with kale and chard, has a thick, hearty texture. The light, savory salmon corn cakes stand out. Sapphire is a welcome new addition to Portland’s brunch spread.

TABLE OF CONTENTS show
WHEN TO VISIT PORTLAND
Traveling To Portland Soon? Here are a few tips:
Portland Trip Essentials
6 Indispensable Items to Pack for a Portland Vacation
Read More About Portland
2018 Feast Portland, Oregon Five Portland Breweries to Visit on Two Wheels 52 Ways to Enjoy Chocolate in & Around Portland

Caitlin Dwyer is a freelance writer from Portland, Oregon. Poet, screenwriter, journalist, and teacher, she loves placing words in skillful combinations. Born with a travel itch, she has recently traveled in Italy, Greece, Turkey, and Thailand, and plans to circumnavigate the globe in 2010. Her travel blog can be found at
caitlind.blogspot.com.

About the Author Caitlin Dwyer

Caitlin Dwyer is a freelance writer from Portland, Oregon. Poet, screenwriter, journalist, and teacher, she loves placing words in skillful combinations. Born with a travel itch, she has recently traveled in Italy, Greece, Turkey, and Thailand, and plans to circumnavigate the globe in 2010. Her travel blog can be found at caitlind.blogspot.com.