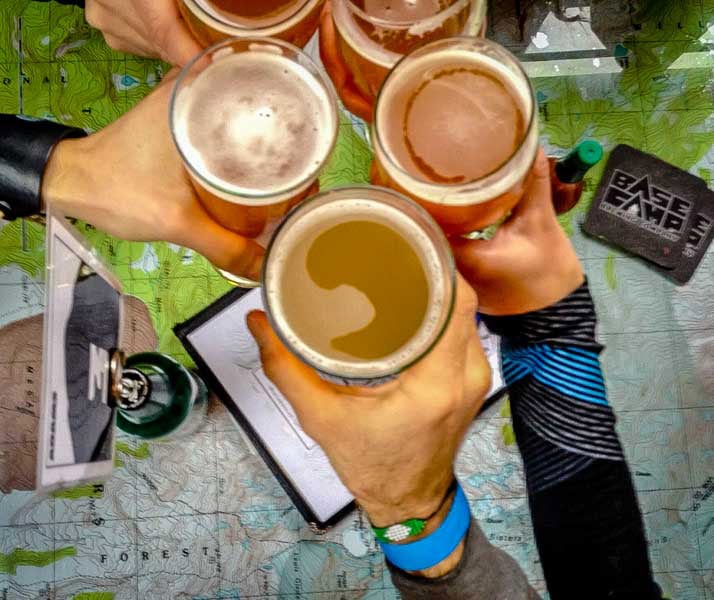 The capital of craft beer in the US, the City of Portland alone houses 61 breweries pouring delicious Northwest favorite libations like IPAs, Imperial Reds, or Cascadia Dark Ales. It’s no doubt that visiting the various Portland Breweries is top on the list for locals and visitors alike.

Most breweries offer sampler menus, so you can try more than one beer while reducing your alcohol consumption between pubs.

Portland is also one of the best cities for cycling in the United States, and the best way to indulge in Portland’s craft beer scene is on two wheels. Locating a bike in Portland is easy with the number of shops that offer rentals such as Bike Portland, or check out Biketown, Portland’s new bike share service launched in June 2016.

Start at Hopworks Urban Brewery in SE Portland, known locally simply as HUB. Portland’s premier bike brewery, HUB offers over 135 bike parking spots combined, locks inside in case you forget yours, and a bike canopy above the bar. 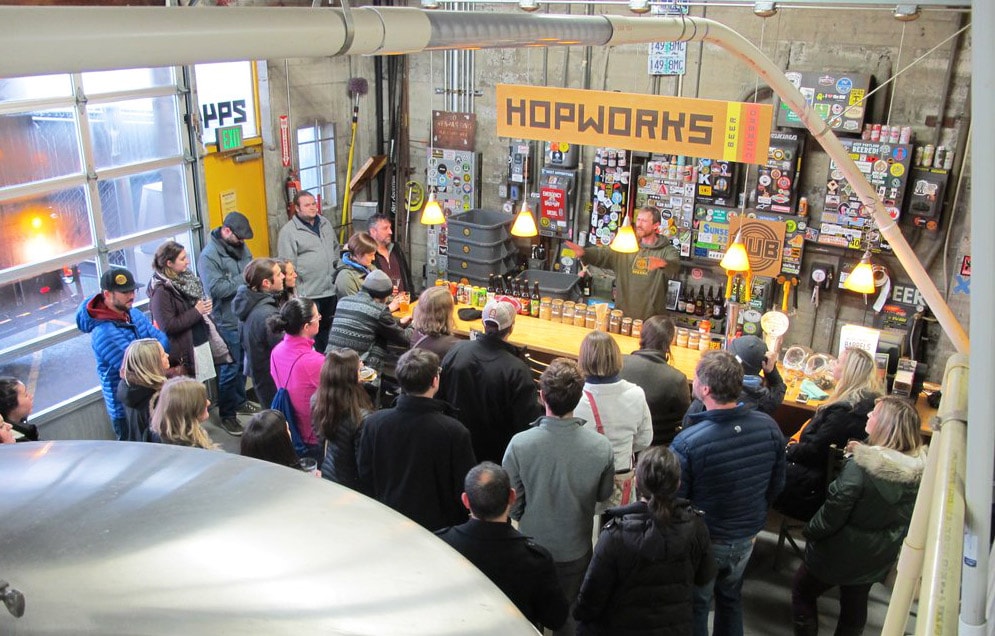 The original eco-brewpub, HUB takes sustainability into mind every step of the way, from construction to brewing. Committing to sustainable food and brewing practices, much of the menu consist of local ingredients and the beer is organic. With plenty of vegan and gluten-free options and fabulous happy hour deals, there is something for everyone. The company used salvaged and recycled materials in the construction of their pubs and equipment as much as possible and publishes an annual sustainability report, publicly available. Further, HUB is a Certified B Corporation and donates 1% of their Powell Blvd pint proceeds to local non-profits.

For a year-round staple try the Organic Velvet ESB. During the rainy winters, Portlanders warm up with HUB’s Organic Abominable Winter Ale and the Organic Galactic Imperial Red Ale.

From Hopworks, take the short ride to Gigantic Brewing. Tucked away in an industrial section of SE Portland, Gigantic makes some of the best beer in Portland. The tiny location is packed year-round and provides two bike parking corrals to house the abundance of folks who swing by on two wheels.

Most of the beer brewed by Gigantic is seasonal and therefore limited. Many times, the brewers make one keg of beer, so when it’s gone, it’s gone. With the production of each beer, the brewery partners with artists and provides them creative liberty to design the labels for the bottles. 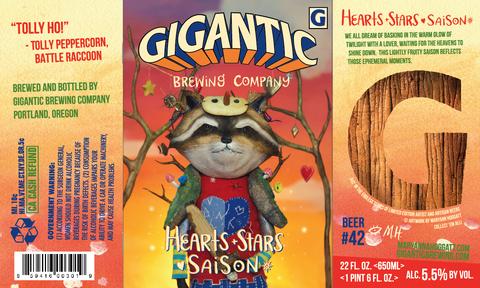 Bring your own picnic or enjoy a taco from the food cart next door. Don’t ask the bar to turn the TV to any sport other than Timbers matches, ‘cause they won’t do it.

Sample the Ginormous Imperial IPA, available year-round, thanks to the request of patrons begging for the ultimate Imperial IPA.

Next, head to Basecamp Brewing in the heart of SE Portland. Dedicated to the adventure junkies craving a beer after an exhausting day in the mountains or surfing at the coast, Basecamp provides delicious brews to quench that thirst. The company’s use of aluminum 22oz bottles allows outdoor enthusiasts to carry their beer without having to worry about their favorite beverage weighing them down or breaking. 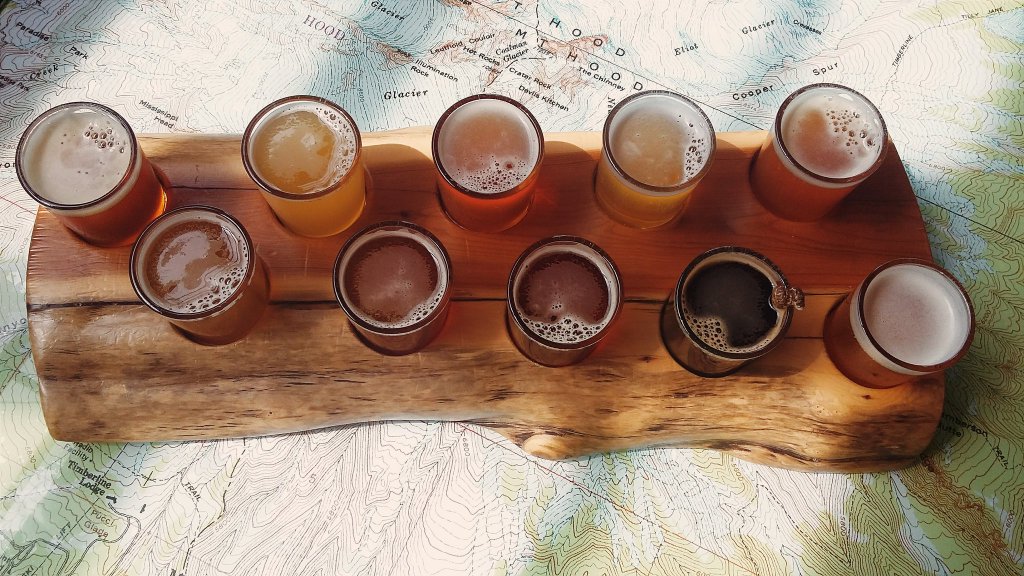 The tap room designed its tables from fallen and salvaged timber mounted to basalt from a friend’s local quarry. Stunning photographs behind the bar encourage daydreaming of the next adventure as you select your pint. Tabletops include maps of nearby forest playgrounds and the ceiling displays constellations glowing in the sky. Basecamp partnered with two food carts, Gonzo and KOI Fuision to provide excellent food to its customers.

The Ripstop Rye Pils and In-Tents India Pale Lager are two Basecamp staples. The rotation changes constantly with new brews in the works.

Less than a five-minute ride from Basecamp lies Coalition Brewing. Located right off Ankeny Street, one of Portland’s largest bike thoroughfares, it’s a rite of passage to make a stop at Coalition. The company’s daring brewers test combinations like Dill Dose, a Berliner Weisse dry-hopped with dill pickle juice from a local pickle maker MoonBrine.

Though currently packed in a tiny location, the brewery plans to expand soon and will turn the parking lot into an outdoor beer garden when the sun is shining. The brewery also loves working with their community and often partners with non-profits to host fundraisers and bring awareness to their cause. The food cart pod just across the street offers several food options to enjoy while you sip a beer or two.

King Kitty Red is a year-round staple that is always a good option and be sure to try Space Fruit IPA brewed during the spring.

The last stop on this tour takes us to Breakside Brews in North Portland’s Dekum Square. The team brews over 80 beers annually delivering mind-blowing beers with unusual combinations, like Townshends Earl Gray Tea in their Bergamont Extra Special Bitter or kumquat, chamomile, and banana to create the Fortunella.

With a constantly changing tap list, regular visits are a must to this brewery. For a year-round option, choose the Stout and look out for the Bourbon Barrel Aztec, an American Strong Ale brewed with cacao nibs from a local chocolatier and two types of chilies aged in bourbon barrels, available in the winter months. 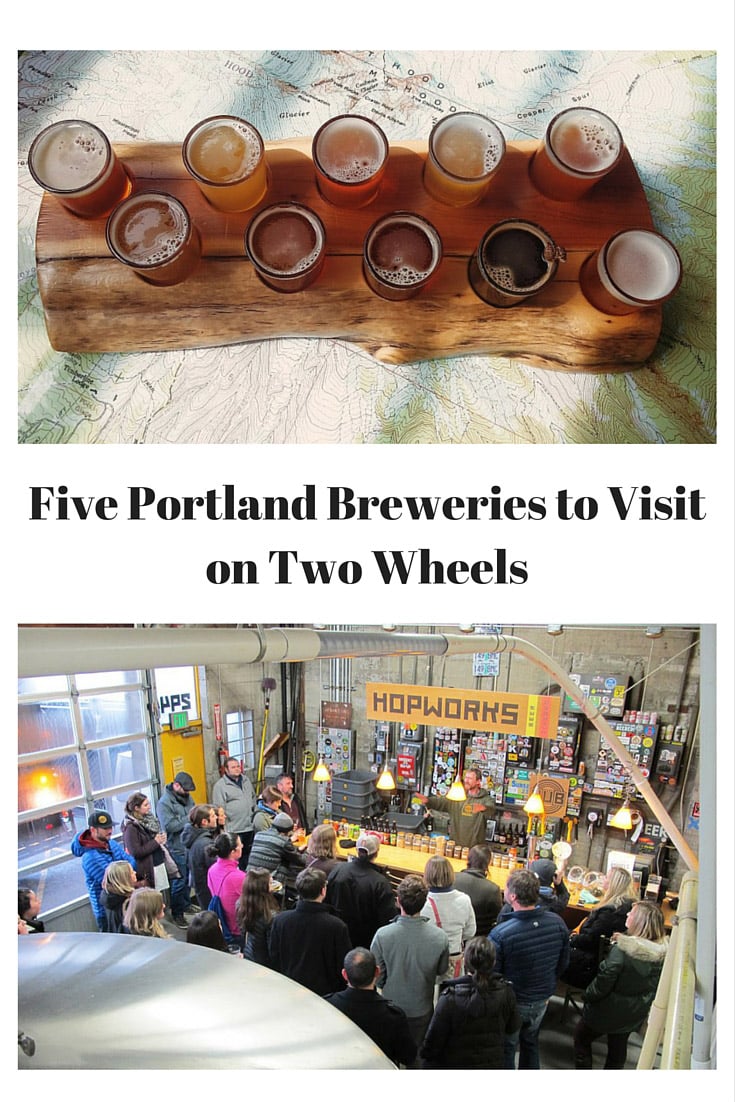 If you enjoyed this article about Five Portland Breweries to Visit on Two Wheels you’ll also love 52 Ways to Enjoy Chocolate In & Around Portland.

Where to stay: There are many places to stay in Portland as well as in Oregon. There is a wide range of hotels, from budget to luxury. For a luxury hotel that won’t break the bank, I recommend the Kimpton Hotel Monaco Portland, which is currently the #1 hotel on Tripadvisor. For a mid-level hotel, I suggest the Best Western Inn At The Meadows. Finally, for a budget hotel, try the Econo Lodge Portland Airport. You can also check HotelsCombined for the best Portland Hotel Rates.

About the Author Jen Sotolongo

Jen is currently cycle touring the world along with her partner and dog, Sora, an Australian Shepherd who convinced her humans that life on a bike is much better than behind a desk. She is the storyteller and photographer behind the blog Long Haul Trekkers. When she's not cycling, you can find her running long distances in the woods or exploring the beauty of her home state of Oregon.
Twitter Facebook Pinterest Instagram Linkedin Youtube Email