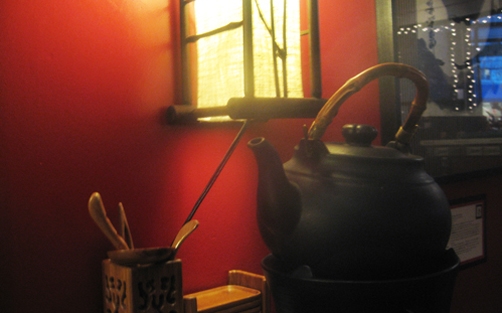 It’s a small teahouse situated along Queen Anne Avenue that would probably be mistaken for a standard café were it not for the wall of metal drums that line the south wall and filled with hundreds of pounds of loose leaf tea. Brett takes the time to write out the name of the tea in Chinese script underneath its English name. A bit showy, but it’s a nice touch and instills within me a sense of confidence.

I’ve always like this teahouse, besides the fact that it’s the place where I bought my first teapot, it is usually quiet with only locals popping in to grab a quick cup on their way by. Most importantly, though, the variety and selection of their teas are excellent.

The Teacup Tea Market is a good provider; knowledgeable and eager to share information. Most essential to this wisdom is not just an awareness of flavors within their teas, but a respect for the places that grew them. More than that, or rather because of that awareness, each tea blend has a particular length of time for steeping, amount to be preferably steeped, and the number of times it can be steeped and if you want to know, you can ask here.

If you are new to tea, the first thing to know is that you should go loose leaf or keep drinking coffee. It’s true, there are many enjoyable teas that come in tea bags, but unfortunately most of these teas are cut into tiny pieces in order to deliver the highest amount of flavor in one use, and indeed, some loose leaf teas, many breakfast blends, look the same. But fine tea leaves are large and they unfurl as they are repeatedly steeped, providing a different level and variety of flavors as you continue to drink. This makes drinking loose leaf tea not just more enjoyable, but more cost effective, although the caffeine is gone after the first steep.

Brett was also kind enough to let me know about the Floating Leaves Teahouse in Ballard. Billed as Seattle’s first authentic Chinese teahouse – and you don’t get any more authentic than a teahouse where the owners go to Taiwan to pick their own leaves – this teahouse is situated a few feet back from busy Market Street, which provides a certain level of distance and quiet that is so beneficial to tea drinking. Its size is small, with a pastiche East Asian setup, and the service is helpful and thorough. And I mean thorough, as the employees really take the time to work with their customers, and sometimes against the impatience of those waiting to be served. Yet, when you’re at the front of the line, it’s first-rate.

Just a casual glance at the tea menu and you may see a lot of similarities between other teahouses, but look closely and you’ll find a large variety oolongs and matcha. These two teas are highly prized among tea drinkers; oolong because of its processing that places it half-way between green and black tea, producing unique flavors that have a specific sense of the producer and its region much like how people think of wine; and matcha, the powered green tea of Japan most well-known through its use in the famous Japanese tea ceremony, because of its brilliance in color, flavor, and physical effects.

Both of these teas require a bit more than just your average teapot to drink, though the shop does have average teapots to drink out of. Oolong is best consumed with a Chinese style tea set, which uses a special tea infuser called a gaiwan. This somewhat miniaturized and complex looking set is actually very common throughout Asia, and while explaining its use is somewhat lengthy, the process of using it truly brings out the character of a tea. Likewise with matcha drinking requires not only special equipment, but a bit of finesse. Floating Leaves is the only establishments in the area to offer these types of equipment for casual drinking along with the expertise to use them (one of the employees is a part of the Urasenke Tea School based out of Japan). Furthermore, if you would like to know how to be a better tea drinker in these areas, the Floating Leaves has classes available to instruct and treat you to a variety of teas.

In addition to these two shops, there are plenty of places in Seattle to purchase loose leaf tea. Pike Place Market has multiple shops that sell loose leaf and teaware including Market Spice, the Perennial Tearoom, and the Crumpet Shop, featuring fresh homemade crumpets to enjoy with your tea. There is also Teahouse Kuan Yin in Wallingford, which also has free wi-fi, pastries, and classes as well. Even some grocery stores have a few tins of loose leaf tea if you look closely.

For the anglophiles, and those with some cash to throw around, is the Queen Mary Tea Room in the Wedgewood neighborhood. Billing itself as a classic British tea room, this teahouse serves breakfast and lunch in addition to all day tea service that features sandwiches, scones, and similar sweet fare. The tearoom also offers a Royal Tea Service that features sparkling wines.

Perhaps, to read into the tea leaves of tea’s future may be found by heading to Miro Tea along Ballard Ave. Like many literary figures before me, I was hesitant to see that future. There’s just something about tea that seems to reject descriptions like “tastefully hip,” yet somehow Miro Tea has managed to do this.

Describing itself as a modern tea bar for the today’s urban tea drinker, Miro boasts over 200 varieties of tea that can be bought by the ounce, cup, or pot, many of them organic. There are always a number of teas out on display for tasting. Food fare features house made crepes, sandwiches, and pastries. There is also an espresso machine if tea isn’t…uh, well, you know. Its interior is pleasant with a lot of seats, couches, nice natural wood motif, and a unique mix of music that provides a little bit more of an urban bar feel – Floating Leaves was playing “Edo Lullaby,” while Miro played Bob Dylan. This place was hip (tastefully), pleasant to sit in, and its selection could not be doubted.

Although I was hesitant spending time in Miro brought the entire Seattle tea experience together. There are so many varieties of tea in the world and a plethora of ways to drink it; it’s produced all over the world and has been influenced by hundreds of cultures. Whether with crumpets, surrounded by tea masters, or just a casual sip at a fun tea shop, it doesn’t matter, because in Seattle there are a multitude of places to sit, sip, and enjoy tea in your own way.

About the Author Corey Kahler

Corey Kahler is a cook and writer living in Seattle.