It was raining when I left for the town of Seneca Falls in the Finger Lakes region of Western New York. Since my regular driving routes around Brooklyn don’t permit me to accelerate over ten miles per hour, what a great release to be the only car on skinny two-lane roads heading towards Seneca Falls NY.

In less than two hours, with skyscrapers far behind me, I was rolling up and down hills through the misty Catskills, past u-pick-`em apple orchards and county fairgrounds. I stopped for a group of hay riders to cross the road.

By the time I pulled into a parking space on Fall Street, the main road through downtown, I wasn’t surprised it required neither change for a meter nor shoving dollar bills into a void in an honor board. As soon as I opened the car door, I was greeted with the crisp scent of autumn leaves. 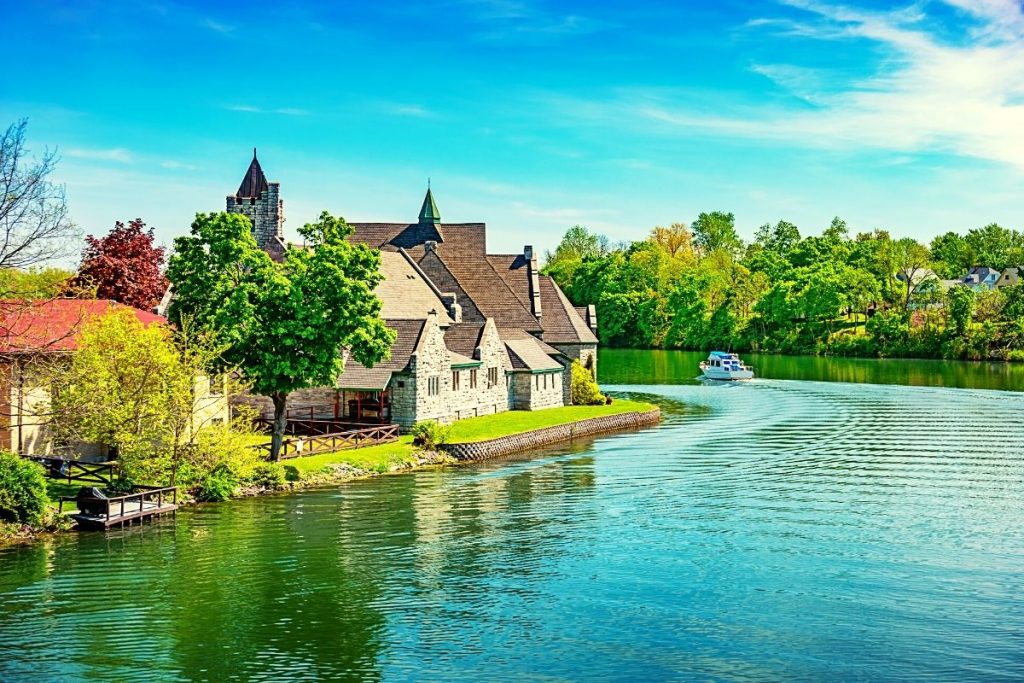 Seneca Falls sits on a canal that connects the northern tips of the Seneca and Cayuga Lakes to the Erie Canal. It has a familiar air – the main street that rolls up at dusk, two-story columned homes as ingrained in the landscape as the oak trees, and friendly, if a bit of you’re-not-from-around-here distance from the townsfolk. In fact, you can’t find a more quintessential small town.

It is widely known among locals that Frank Capra visited before shooting “It’s a Wonderful Life” and based the fictitious Bedford Falls on this place. I could picture Jimmy Stewart running down Fall Street in the snow, yelling “Hello, Seneca Falls!”

Tourists visiting for the scenic lakes or the 28 world-class wineries may have only this basic perception of Seneca Falls. But there is a legacy of industrious willfulness and status-quo challengers that continues to evolve.

The first Women’s Rights Convention was held here with the intention of helping women gain equal footing with men in all facets of life, including the right to vote, but that would come later, much later. In 1848, there were five pioneering women, a church, and a declaration. To find out more, I headed to the Women’s Rights National Historic Park building, one in a long line of easy-to-miss, 70s-style storefronts.

Dioramas and mementos trace the progression of women’s rights, or “the movement” as convention organizer Elizabeth Cady Stanton called it, from that first convention through the advent of the 19th Amendment granting women the right to vote to the failed Equal Rights Amendment.

But it was the perseverance of those first conventioneers that stuck with me. In a time where women could not own property or attend college, Stanton noted, “in the eyes of the world, I was not as in my own eyes. I was only a woman.” I can’t help wondering if I would have had the courage to face the public outcry and humiliation that the women of Seneca Falls knew would come following the convention.

As predicted the newspapers had a field day. They claimed the women were “sexless old maids” and “heretics.” The New York Herald called the convention “amusing.” A Philadelphia newspaper declared, “A woman is nobody. A wife is everything.”

Following the maxim that any publicity is good publicity, Stanton said, “The first step in progress is taken.” But she also sensed that the final step would be a long time coming. “We are sowing winter wheat and won’t be alive to see the spring harvest.” She was right. It would take seventy-two years until the Nineteenth Amendment was ratified giving women the right to vote in 1920.

Anne Derousie, a park ranger, gave me something else to think about as I walked to the Wesleyan Methodist Chapel, the site of the convention. “These were ordinary women, much like you, who did extraordinary things.”

Things To Do in Seneca Falls NY 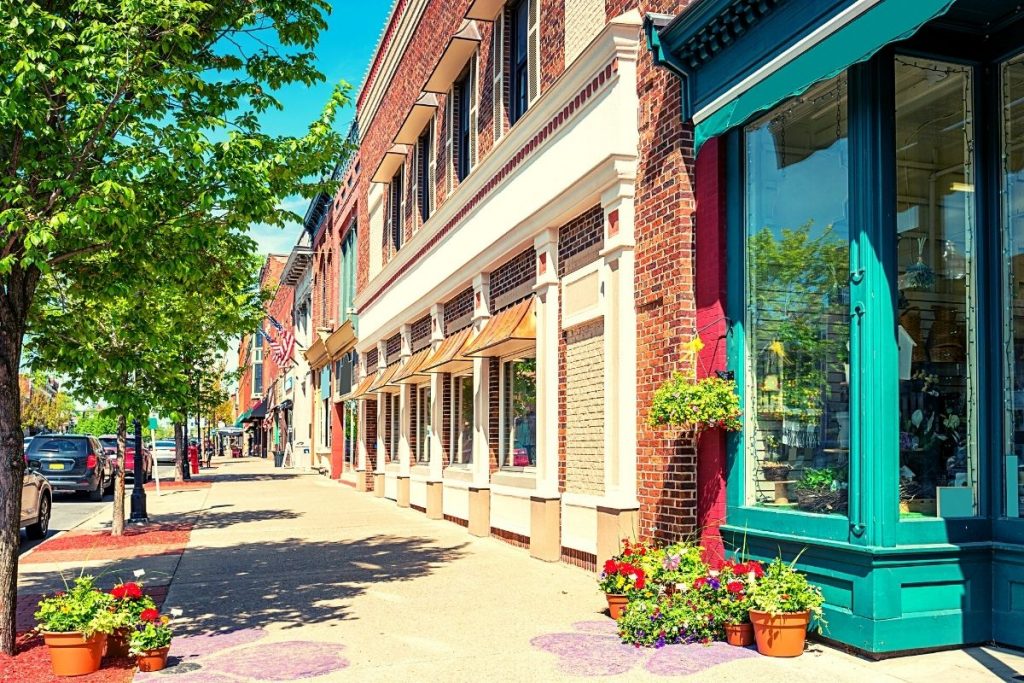 The map to the chapel had pointed me to the building next door, except it didn’t look much like a chapel. A dozen of us huddled against the blustery wind and drizzle in a barn-like structure. Only two of four sides remained, the rafters were exposed and there was no glass in the windows.

A Harvard architect team won a competition to restore the chapel. I figured they hadn’t yet begun when Andrea Dekoter, another National Parks employee, offered, “Isn’t it symbolic?” Her shivering mass of temporary students nodded in unison. Apparently, the design team felt the absence of walls paralleled the precarious and fragile movement that was women’s rights. I only felt the desire to return inside.

For the politically disenchanted, a visit to Seneca Falls might give them a change of heart. As I tooled around town looking for a restaurant open after seven p.m., I noticed all the homes on the main road had two, sometimes more, political campaign placards on the front lawn.

With Election Day a few months away, it seemed the politicians wanted to get the most bang for their buck in exposure, so I randomly chose a side road and was amazed to find just as many signs posted on the swales. The people of Seneca Falls weren’t shy about letting their allegiances be known and they seemed to be proud of their somewhat rebellious history.

Like any river town, Seneca Falls’s early economy was dependent on water. Tanneries, distilleries, flour, and textile mills, and hydraulic facilities abounded on the shores. Goulds Pumps, established in the mid-1800s, remains one of the town’s largest employers.

Most of these factories were located in “the flats,” a wide swath of land bordering the canal, north of downtown. Elizabeth Cady Stanton’s second-floor windows opened to the flats and the thick plumes of smoke and foul smell. Now her house-cum-museum overlooks the bucolic Van Cleef Lake, created when upstream locks were built on the canal submerging the unsightly factories.

Most restaurant options on Fall Street were closed except for a pizza place, a coffee shop, and a quiet bar with no name on the storefront and the lights still on. I peeked through the window and saw an eclectic mix of artwork, sculpture, and a handful of people.

This, it turned out, was the Temperance Tavern, an art/wine bar that didn’t serve wine – yet. It was less than twenty-four hours old with a new paint smell and a scratch-free bar. Owners Jack and Kathy Pross had relocated after living in New Hampshire for more than two decades.

“Here people say hello to you as they pass and look you in the eye,” Jack said. He made most of the metal sculptures hanging on the walls of the tavern and hoped to offer art workshops in the near future.

I asked if there are a lot of closet artists in Seneca Falls and got the sense there was a burgeoning art community just beneath the surface. “Soon more artists will hear about the workshops and want to come, too. Sometimes it takes just a few people to act as magnets,” Jack said. That was a popular refrain in this city on the canal that has almost the same population as it did in 1920. It takes but an ember to set an entire forest ablaze, and it took one convention in Seneca Falls to spark a nationwide revolution.

Kathy showed me her gallery. “Coline Jenkins-Sahlin, Elizabeth Cady Stanton’s great-great-granddaughter, bought this one today.” It was a close portrait of Stanton with trademark white hair and soft features. It will be added to a collection her descendants were gathering for a museum. The expressive, thoughtful eyes were what Jenkins-Sahlin loved about the piece. I also saw bravery and a little bit of audacity there too, qualities she must have had in abundance. Qualities she is still imparting to the almost 20,000 yearly visitors of the park.

“What happened here inspires people. It gives them courage,” said Derousie. There is a pervasive feeling in Seneca Falls that a few dedicated people can make a difference, that if you don’t like something, you have the power to change it, even if you’re up against seemingly insurmountable odds.

I think of this as a decidedly American notion, but it has taken root in places across the globe, even in Afghanistan, a country whose Pashtun code, the customary law that regulates life there, often treats women as property. It wasn’t long ago the country had its first women, parliamentary candidates.

It takes real people, affording real change to make a difference. But these days it’s easy to become polarized, rather than magnetized. Now when I feel like that I think about the uphill battle fought by the women of Seneca Falls. It may take many people to forge a revolution, but change can start with just one.

Our favorite place to check hotel reviews is TripAdvisor and our favorite site to find the lowest hotel prices is Hotels.com.

Where is Seneca County NY?

Seneca County is in the western part of New York in the Finger Lakes Region. Cayuga Lake borders it to the east and on the west by Seneca Lake.

The summers in Seneca Falls are warm and partly cloudy and the winters are freezing and mostly cloudy. The hottest months are July, August, and then June. The best time to visit the Finger Lakes region is in May and September-October.  The highest accommodation rates are during the peak months of June to August. Fall foliage is beautiful in Seneca Falls and a great time to visit.

The best time to visit Seneca Falls, New York is from May to September, when there are plenty of opportunities to take advantage of the area’s outdoor activities. Hotel rates will be a bit higher in the peak months of June to August and expect longer lines at attractions and nearby wineries. It’s also a good idea to make restaurant reservations in advance during the summer months. 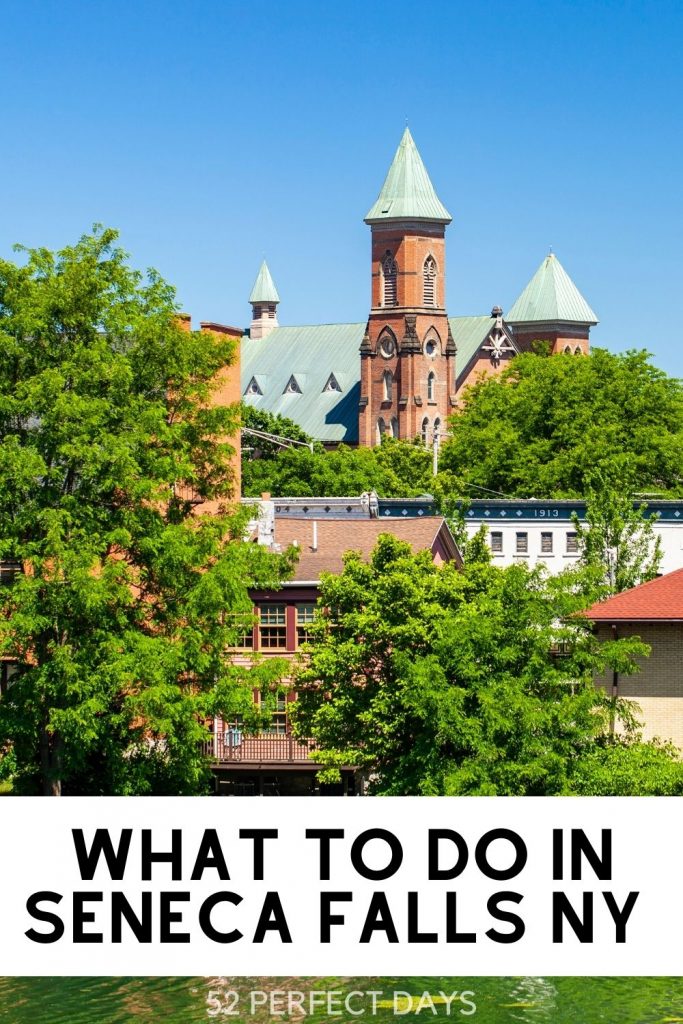