Seattle loves its food and prides itself on its variety of restaurants and the seriously innovative chefs that make a name for themselves in town. In fact, you can get a great idea of what food Seattle has to offer just by staying in the Bell Town and Pike Place neighborhoods. 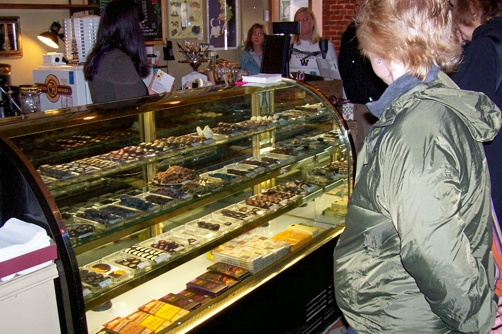 Begin any Saturday or Sunday and live large, starting with brunch at Cafe Campagne, a lovely French restaurant walking distance from downtown and Seattle’s waterfront. Enjoy a French style omelet flavored with herbs and filled with escarole and chèvre served with house made fennel sausage. Or try the brioche fried in bourbon egg batter, served with maple syrup. You can’t go wrong either way. Brunch is served from 8 a.m. until 4 p.m.

Next, head to the Macrina Bakery and Café; the meeting place of Seattle Food Tours for an exploration of Bell Town and Pike Place with a long time Seattleite, Bronwyn Gerberdin. For any food lover this tour offers tastings, in depth information about the area and an introduction to some great restaurants.

Before heading out on the tour though, make sure to check out this artisan bakery that provides bread and other baked goods to some of Seattle’s best restaurants and markets. Grab a cup of coffee or tea, meet your tour mates, and sample the Monkey Bread which is a lovely layer of bread, apples and caramel.

The tour begins by heading down 1st Avenue and Bronwyn sharing history of Seattle and the Bell Town neighborhood while stopping periodically to detail many fine dining establishments.

One of the first tasting stops on the tour is the Frontier Room, one of the few barbeque spots in downtown. The Frontier Room has been around as long as the old fashioned neon sign would suggest and it saw Bell Town through some of its seedier times. The barbeque is the sweet variety with a touch of molasses and a slight bite at the end. Served with coleslaw on top of the sandwich it is filling and delicious.

Bronwyn then led us to Cherry Street Coffee. They only have one blend, Sumatra, and they’re proud of it. They also have tea, smoothies, and shakes as well as baked goods for breakfast and soup and sandwiches for lunch. Rest, have some caffeine and gear up for an assault on Pike Place Market.

Rather than do the touristy, flying fish, body smashing part of the market that most people know, Bronwyn likes to introduce her guests to Post Alley which runs just east of the market and has some slightly hidden surprises such as Rose’s Chocolate Treasures. Walk in the door and the fragrance of chocolate just about knocks you over, but that’s a good thing, right? Sure, there’s the standard hazelnut, or peanut butter filled chocolates but how about sea salt or wasabi? If you can’t get enough Rose’s also books private tastings for parties of four to eight and offers classes about chocolate.

A block down the Alley and it’s time for a little taste of lunch and the best chowder in Seattle at Pike Place Chowder. Yes, their clam chowder has won every major chowder competition but do not overlook the bisque, which is full of seafood and has a creamy goodness that is to die for. Better yet, get a sampler which includes four different chowders and bread to sop it up with.

Next it’s back to Bell Town and what Bronwyn calls Mr. Douglas’s Neighborhood-as in the best known chef in Seattle Tom Douglas. Tom Douglas and his wife own five downtown Seattle restaurants, he writes cookbooks, hosts a radio show, markets himself like a madman, and beat an Iron Chef! At his Dahlia Bakery, try a mini version of the infamous coconut cream pie, or take something home for later.

You certainly will not need to eat lunch after the tour but consider all the possibilities for dinner! Head over to the market, elbow to elbow with the masses. The vendors at Pike Place Market offer lots of tasting opportunities so don’t pass up the sliced produce, infused oils, teas, chocolate covered cherries, bizarre jams, and dried fruits.

For dinner use some of Bronwyn’s suggestions such as Cascadia which is owned by Chef Kerry Sear or located a little further down 1st Avenue is Flying Fish, where Chef Christine Keff has made a big name for herself with Pacific Rim cuisine and use of local food products.

After dinner head back to the Post Alley and have a Guinness at Kell’s Irish Restaurant and enjoy the live Irish band providing maniacal interactive entertainment or slip across the alley and have a cocktail at the Pink Door which is notorious for its trapeze over the bar and burlesque shows.

It’s hard not to have a great day in Seattle but when you throw in some great food it’s all the better.

Helpful Information: If you want to make it an overnighter check into the Inn at the Market with views of Elliot Bay and right next door to Pike Place Market.