New York City has long been a stomping ground for some of America’s greatest writers, poets and wordsmiths. From E. B. White to Norman Mailer and Jack Kerouac, New York is a mecca for aspiring writers and literary enthusiasts.

As E. B. White himself stated in his essay Here is New York, “there is the New York of the person who was born somewhere else and came to New York in quest of something…whether it is a farmer arriving from a small town in Mississippi…or a boy arriving from the Corn Belt with a manuscript in his suitcase and a pain in his heart, it makes no difference: each embraces New York with the intense excitement of first love.” It comes as no surprise that New York continues to attract prolific and influential poets, novelists, dramatists and lyricists.

When visiting New York, any literary aficionado will undoubtedly want to stay at The Algonquin Hotel. This infamous hotel remains an epicenter for those devoted to the literary and theatrical arts. Since the hotel’s opening in 1902, prominent writers and actors have frequented the establishment’s bars, restaurants, meeting rooms and guest rooms. Probably the most well known group of writers to gather here is the assemblage that came to be known as the Algonquin Round Table. Lasting throughout the 1920’s, the Vicious Circle, as they called themselves, consisted of literary heavyweights such as Dorothy Parker, Robert Benchley, Harold Ross, Alexander Woollcott and playwrights George S. Kaufman, Marc Connelly and Edna Ferber. The hotel has also catered to literary legends Gertrude Stein, Simone de Beauvoir and Eudora Welty.

Start your day with lunch at The Whitehorse Tavern. This famous watering hole was a favorite of Bob Dylan, Jane Jacobs and Dylan Thomas. The Whitehorse Tavern is rumored to be the establishment where Thomas drank himself into a lethal coma (he consumed 18 shots of whiskey as the story goes), however some accounts state that he slipped into a coma several days after the infamous night of binge drinking. Despite these opposing narratives, The Whitehorse Tavern’s rich literary history remains undisputed.

A great way to learn about New York’s literary history, and to see several sites in a short period of time, is a literary walking tour. There are several different walking tours to choose from, however New York Talks and Walks, led by Dr. Philip E. Schoenberg and his entourage of NYC experts, tour of Literary Harlem is recommended. The literary tour of Harlem features the most significant artists from the Harlem Renaissance such as Langston Hughs, James Weldon Johnson, Claude McKay and Countee Cullen.

After the walking tour, hop on the subway for a short ride to the Bronx to visit the Edgar Allen Poe Cottage. Although many of Edgar Allen Poe’s homes are now historically preserved sites, it’s the modest cottage located in the Grand Concourse area of the Bronx that was the author’s final home. After a brief stint at the University of Virginia and an attempt at a military career, Edgar Allen Poe began establishing himself as a writer, poet and critic. He rotated between several different cities, among them Philadelphia, Baltimore and Richmond, and worked as an editor on a number of different literary journals. Poe and his wife Virginia moved to the cottage in the Bronx, known then as Fordham Village, when Virginia fell ill with tuberculosis and is where he spent the last years of his life, from 1846 to 1849.

A literary escapade would not be complete without a stop at a bookstore. Luckily, New York is home to several unique shops where one can catch a poetry reading, buy used books or simply relax with a cup of coffee and a great novel. Visiting the many bookstores New York has to offer could fill an entire day in itself, but with limited time you won’t want to miss the Strand Bookstore. Their slogan promises “18 Miles of Books”. 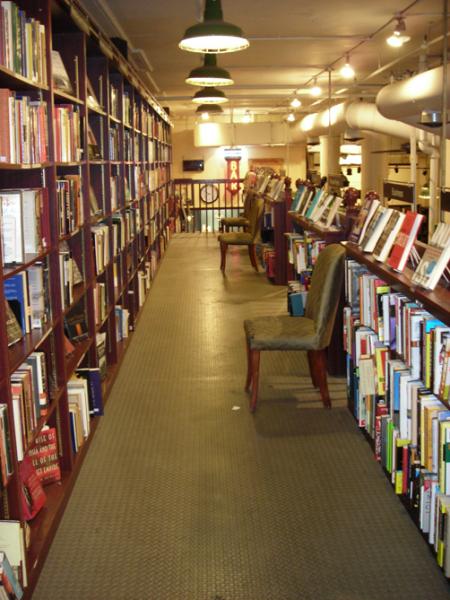 Another shop worthy of a visit is the Housing Works Bookstore that offers new, used and rare books complete with a cafe. All proceeds go to Housing Works, a non-profit organization that provides resources to New York City’s homeless population living with HIV and AIDS.

Now that you’re armed with the latest novel, poetry anthology, biography or journal, end your day with dinner and drinks at Cornelia Street Café. Their website states that the space has been “a performance home to the Songwriters Exchange, the Writers Room, the Writers Studio, the Greek-American Writers Association, the Italian-American Writers Association, the New Works Project/Theater and many others”.

The café has been a prominent part of the New York literary and arts scene since 1977. The restaurant boasts an upstairs bar, three dining rooms and a downstairs performance space. Sit back and enjoy a cocktail and dinner while you revel in your day of literary exploration.

Planning a trip to NYC? Take along the New York Pass

Elizabeth Rose is a writer living in New York City. Upon graduating from the University of Virginia, she did what many other literature students before her have done: she got a job waiting tables. She wasn't a waitress for long however, and has since worked as a television production assistant and as a researcher for a prominent publication.