The indomitable, half-Odawa, half-French, fur trader who had fascinated me for years lent her voice to the Mackinac Island she loved. She welcomed us to the Harbour View Inn, the home built for her by her son-in-law, Captain Benjamin Pierce, brother to President Franklin Pierce.

The gentle breezes whispered her words: “I apologize that I can’t spend more time with you. The Harbor is buzzing so you won’t lack for company. I must canoe my son, Joseph, to Montreal for school, and I’m waist deep in plans for my daughter, Josette’s, wedding. It’s the social event of our busy summer. Please make yourselves at home.”

For three glorious summer days we hiked and biked the island that was the center of the Great Lakes Fur Trade when the luxuriant beaver pelt reigned king. Our ideal weekend came not from chance, but wise choice. We wanted to recharge, but take home more than breathtaking mental snapshots and a pile of dirty laundry.

When I suggested Mackinac Island my husband said, “Let’s get packing.” A small duffle bag each was sufficient for blue jeans, t-shirts, and good walking shoes. A light jacket served double duty: warmth if a chilly east wind blew and a way to dress up jeans for casual dinners.

We turned off computers, tucked cell phones in a cupboard drawer, and drove to Mackinaw City where a catamaran sped us to Haldimand Bay. For fifteen short minutes we savored striking views of the Straits of Mackinac where Lake Huron and Lake Michigan kiss. There was no additional charge for the sprinkling of magic that invited us to step ashore, two centuries back in time, when traders paddled fur-filled birch bark canoes to the summer gathering known as Rendezvous.

Our illusion of reversing time was nurtured by the island’s prohibition against automobiles. A horse-drawn wagon met us at the harbor and the driver whisked our bags to our rooms. 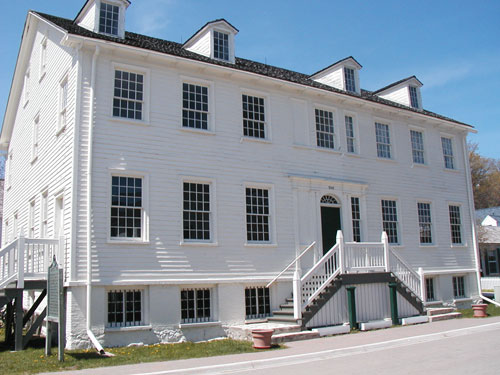 A half-block walk and we stood where Father Jacques Marquette built his humble mission on the enchanted island that the Ojibwe and Odawa called the birthplace of the world, a sacred spot where fairies danced and tribes gathered for council meetings. The First People called the island Mi-shi-ne-macki-naw-go, the great turtle. The name was spelled at least fifty-five different ways on its journey to become Mackinac Island. I imagined passing soldiers, fur traders, American Indians, and merchants as I walked Main and Market Streets.

We charted our strategy as we relaxed at the Ice House Bar and Grill with beers and fresh-cut potato chips served with a warm bleu cheese dip that tingled our taste buds. Then even though we weren’t staying at the Grand Hotel, which required dressier clothes and a bigger budget than we planned, we took a carriage ride to the famous landmark built in 1887 and strolled it’s front porch, the world’s longest.

By early afternoon we ambled along interior roads through the center of the island to Fort Holmes, built by the English when they defeated the Americans in 1814. At Point Lookout we breathed the spectacle of Lake Huron as the bright sunshine created a diamond-studded overlay on the sapphire waters. We admired the seventy-five foot limestone breccias rock mass called Sugar Loaf.

We investigated Skull Cave, a tribal burial ground. During an attack on mainland Fort Michilimackinac in 1763, Alexander Henry was hidden there by his Ojibwe friend, Wawatum, saving the Englishman’s life.
As the sun descended on our first day, we headed to Millie’s on Main, saving room for the bread pudding with bourbon sauce. Our server delivered this other-worldly delight to our table and warned, “Customers sometimes forget their manners and lick the plates.”

After dinner flickering fireflies guided us past elegant Victorians and back to the Harbour View. Along the way the smell of fudge wafting from small shops tempted us to purchase an indulgence for later.
Saturday we set off to explore Fort Mackinac where history and dazzling scenery walk like lovers, hand in hand. The fort, built by the British to control the strategic Straits of Mackinac during the American Revolutionary War, perches on a steep limestone cliff above Huron’s vast expanse.

On the Parade Ground soldiers assembled for roll call and practiced military drills, reenactments of marches, a cannon salute over the harbor and weapons demonstrations. Interpretive displays and period-costumed guides dropped us in the middle of the action. During lunch at the Fort Tea House we peered down on Main Street and the bustling harbor below.

Our tickets to Fort Mackinac provided entrance to several historic buildings along Market Street. After lunch we sauntered from the McGulpin House and Beaumont Memorial at the east end of Market to the Benjamin Blacksmith shop and the Biddle House at the west end. Along the way we stood on the spot where John Jacob Astor, the country’s first millionaire, established the American Fur Company’s northern headquarters in the 1820s. From this site millions of dollars worth of furs were sorted, baled and shipped to the East Coast and Europe.

Saturday night’s dinner was planked whitefish at the Village Inn. Caught that morning, the fish was a gastronomic treat that made our mouths wish our stomachs didn’t fill so fast. It was easy to understand why the American Indians called Mackinac “the place of the fish.” 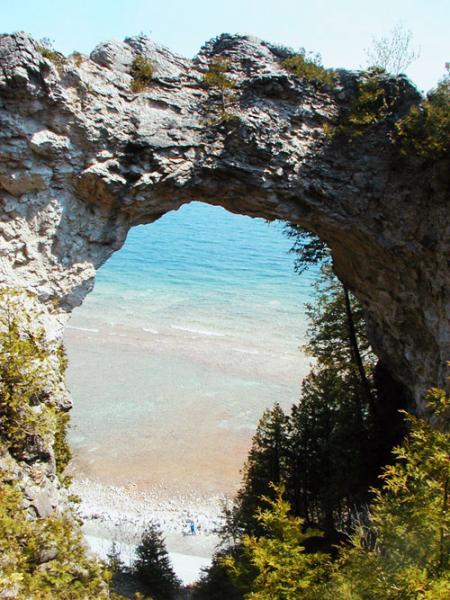 Before saying goodbye on Sunday we hiked the 8.3 mile island perimeter on M-185, the only Michigan highway that bans motorized vehicles. Toward the end of our journey Madame LaFramboise’s spirit drifted close again to bid us farewell. “I saved Arch Rock for last, so its beauty will travel fresh in your mind,” she softly murmured. “It was carved by the tears of She-who-walks-like-the-mist, when her father tied her to the rock to separate her from her lover.”

Mackinac Island tied our hearts to its rich history and extracted our promise to return.