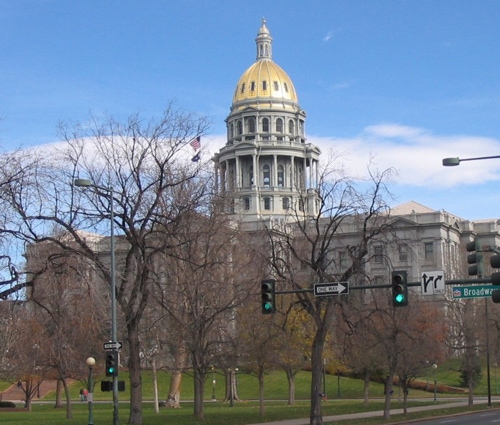 Denver has a vivid literary history including famed work from many poets, novelists and journalists; some born and raised in Colorado’s capital while others, residents for only a short time. What they all have in common is they and their prose were influenced by Denver.

Perhaps Walt Whitman explained it best in his description of Denver’s natural wonder: “So much for my feeling toward the queen city of the plains and peaks, where she sits in her delicious rare atmosphere, over 5,000 feet above sea-level, irrigated by mountain streams, one way looking east over the prairies for a thousand miles, and having the other, westward, in constant view by day, draped in their violet haze, mountain tops innumerable. Yes, I fell in love with Denver.”

There is no better place to begin this day than by tracking some of Denver’sliterary history on the fifth floor of the Western History Department at the Denver Public Library. This exhibit hall houses everything from Native American picture books to Jack Kerouac’s manuscript scroll for On the Road.

The exhibit hall leads into the Western History/Genealogy Department, home to an impressive collection of maps, government documents, and newspaper clippings of Denver’s history. True bibliophiles will appreciate sliding newspaper clippings from the 1920’s out of their manila envelopes and cautiously unfolding the delicate paper. It would be easy to while away an entire day sifting through the myriad of bookshelves, clipping files, and special exhibits, but this day’s agenda is too full.

Only a few blocks from the library is the State Capitol Building, and your next stop. Just inside the west entrance is the visitors’ information desk where tours begin. Make your way to the rotunda that features a panel dedicated to the poetry of Denver’s Poet Laureate, Thomas Hornsby Ferril that begins “Here is a land where life is written in Water.”. All the other
panels depict the cultivation of a valuable Colorado resource – water, and Ferril’s words provide the captions for these murals. As you’re heading up the stairs leading to the west entrance, notice the mile marker medallion. This marks the point where Denver rises exactly 5,280 feet above sea-level, hence the Mile High City nickname.

You’ll need some sustenance after climbing the steep steps of the Capitol, so head across Colfax Avenue to the CityGrille. They serve standard American fare, but do it well; their hamburgers have received several Best of Denver awards including the AOL CityGuide who says they have ’15 Burgers to Try before you die’. Known for power lunches as well as burgers, you might be greeted with a handwritten sign on the door, “Welcome legislators and lobbyists” if you’re here during the legislative session. People watching and eavesdropping peak during the session as legislators and lobbyists meet for working lunches to discuss their latest bills.

After bolstering up your strength with one of Denver’s best burgers, wander over to the Women’s Press Club. It’s an unassuming brick building that boasts an impressive membership roster of female writers in Denver through the decades. Founded in 1898, it is one of the oldest women’s press clubs in the nation. Although official tours are not given, if you stop in surely someone would willingly oblige your curiosity.

Next, visit the Colorado History Museum, which houses more exhibit archives of Denver’s history – literary and otherwise. This museum, much like the Western History department of the Denver Public Library is home to exhibits, dioramas, and the largest collection of newspaper clippings in Colorado. Their collection also includes original manuscripts, as well as photographs and maps of Denver throughout its history. If you’re feeling ambitious, this is also a meeting point for a variety of guided walking tours. And on the first Friday and second Saturday of every month the museum hosts lectures and demonstrations on everything from how Colorado women worked for and won the right to vote to a cowboy’s day in the life in a saddle.

And finally, what better way to end your perfect history-steeped day than with some comfort food at Denver Diner? Complete with vinyl booths and counter-top dining, the Denver Diner is known for being open when you’re hungry. ‘Round the clock, the diner is open for business, serving up classics like chicken fried steak and chocolate malts.

About the Author Maura O'Neal

Maura O’Neal has lived in Denver for three years and is still finding new things to do in and around the Mile High City. When she is not out exploring her own neighborhood, she works as a flight attendant to support her international travel habit. Visit her blog at http://travelsabound.blogspot.com.