My favorite Flammkuchen Recipe (German pizza with onions and bacon). It’s easy, delicious, and quick to make! I also have a gluten free recipe option for Flammkuchen included.

When I visited the beautiful city of Colmar, in the Alsace region of France, I was tortured by the pizza I saw on the tables in every cafe I walked by. It looked like a very thin flatbread with a white sauce. I was tortured because I am allergic to gluten and couldn’t order what I learned was flammekueche or tarte flambée.

Recreating recipes from around the globe at home

During the same trip, I visited friends who live in Luxembourg but are originally from Germany. They are very good in the kitchen and were excited to serve a few gluten-free versions of their favorite meals for me. One night for dinner, I watched as they mixed gluten-free flour and water to make a dough and had no idea that they were making the same pizza I saw in Colmar.

In French, it’s known as tarte flambée, in the Alsatian region it’s called flammekueche, in German flammkuchen. Whatever you call it, it’s delicious and decadent.

My friend’s homemade gluten-free version was absolutely delicious and I’ve been looking forward to recreating this recipe. The biggest stumbling block is that the traditional Alsatian recipe calls for lardons and crème fraiche; two items I’m having a hard time getting my hands on at the moment.

Flammkuchen is a specialty of Alsace and regions on the southwestern German-French border. In my opinion, it is a more delicious version of pizza. It consists of dough rolled out very thinly and covered with crème fraîche (or sour cream), thinly sliced onions and lardons (or bacon or pancetta) and baked.

In French, it’s known as tarte flambée, in the Alsatian region, it’s called flammekueche, in German flammkuchen. Some call it Alsatian Pizza but I’ve been told that you don’t want to make the mistake of calling it pizza in Alsace!

Alsace is a historical region in northeastern France on the Rhine River plain. Bordering Germany and Switzerland, it has alternated between German and French control over the centuries.

What does Flammkuchen mean in English?

Some say that Flammkuchen was originally used by bakers to test the temperature of their ovens. Others say Flammkuchen was initially prepared by German farmers’ wives and oven-baked just after the bread in a traditional bread oven. They would use the remaining dough and cook it with the intense heat in the hot oven.

It is traditionally served as a first course or an appetizer with a glass of chilled Alsatian white wine, the flammeküeche is made with thinly rolled-out bread dough, but you can easily substitute a store-bought roll of gluten-free pizza dough.

The dish is now cooked throughout both Germany and France as well as in some towns in Switzerland.

How to Make Flammkuchen

Traditional and Gluten Free Flammkuchen is quick and easy to make. Even the crust is easy to make, but if you prefer not to make your own crust, look for one that is very thin. It’s really only a few steps; make dough & let it rest, add topping and bake. It is super simple and the results are super delicious. 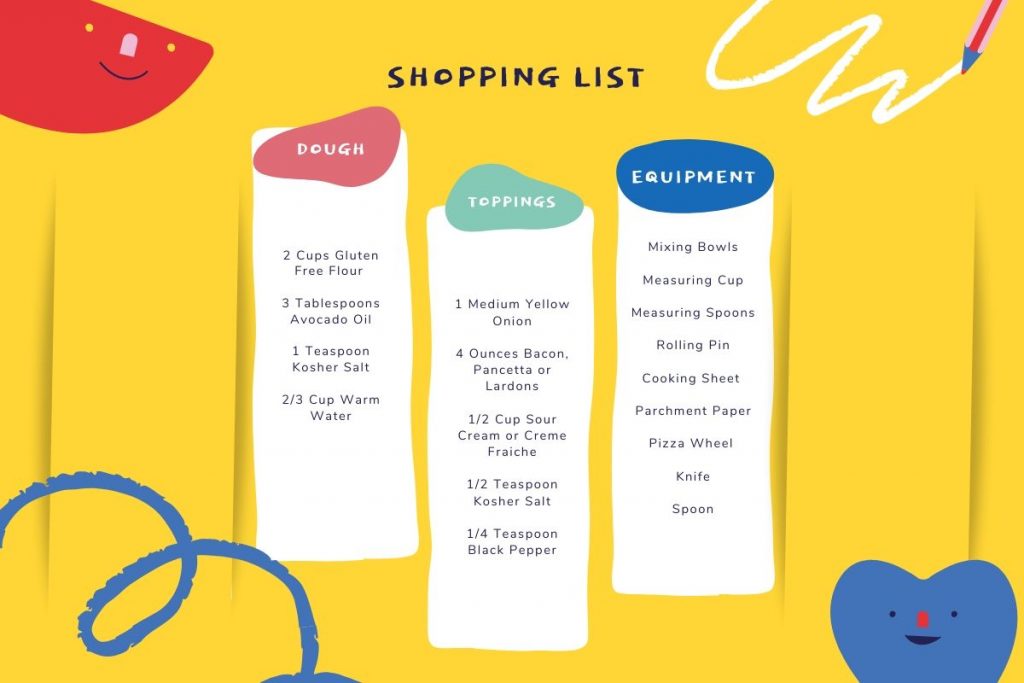 My gluten-free version of this Alsatian pizza is based off the dish my German friends made me and includes gluten-free flour (I use Mama’s Pizza Crust Mix), Olive oil or Avocado oil (I like the taste of Primal Kitchen avo oil), kosher salt, bacon (or pancetta or lardons) onion, salt, sour cream or creme fraiche, and black pepper.

Most European traditional flammkuchen versions of the recipe call for Lardon, which Bon Appetit says is just a fancy word for slab bacon sliced into matchsticks.

Note: if you aren’t gluten allergic/sensitive you can use any flour substitute. 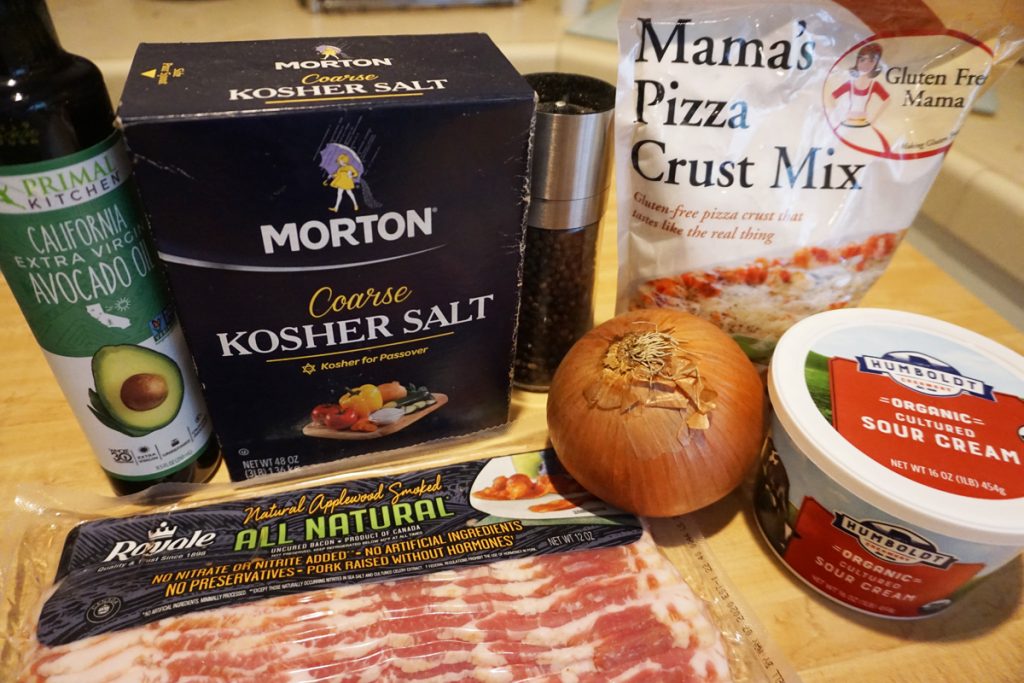 The dough rolled out very thinly with a rolling pin and covered with sour cream or crème fraîche, thinly sliced onions, and bacon and baked. 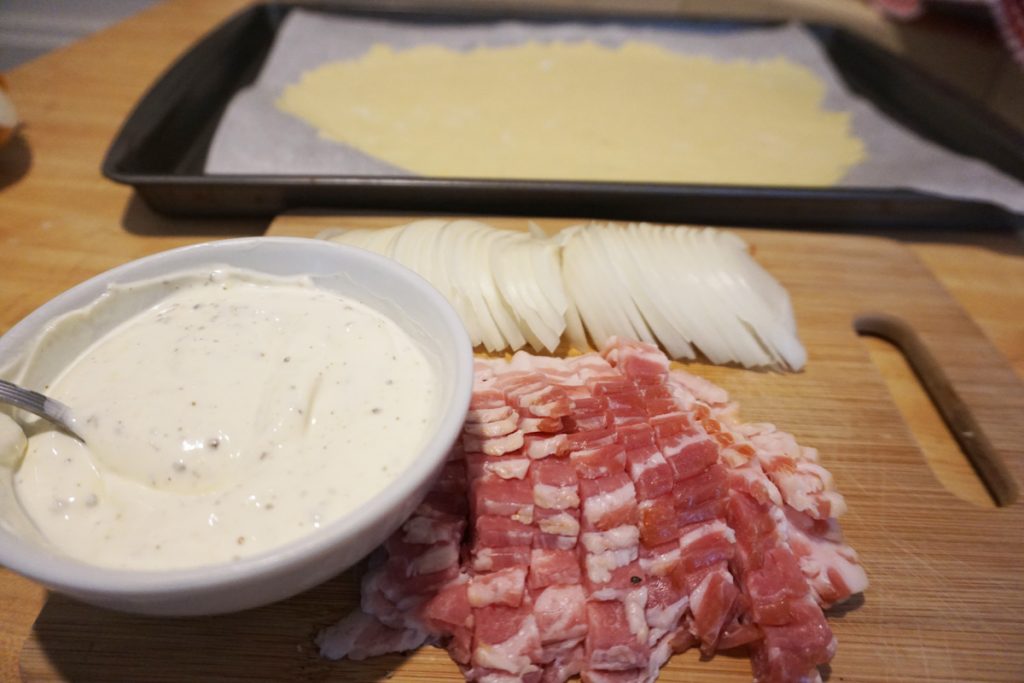 The key here is to be sparing with the toppings and to slice them thinly so that they will cook quickly before the tart burns. 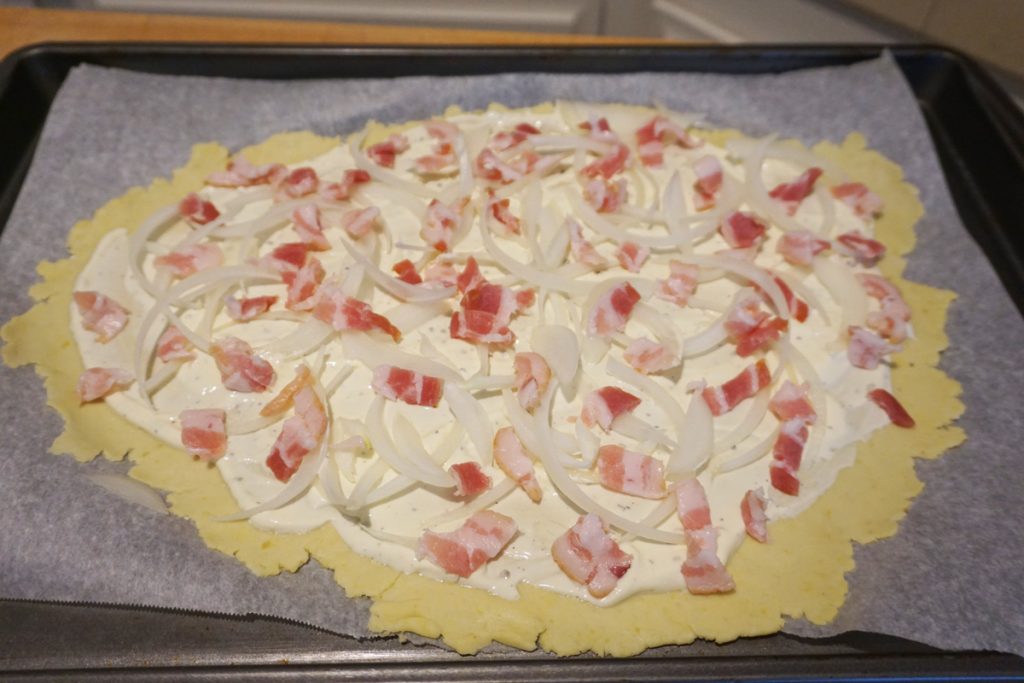 I love that it’s paper-thin and crunchy, I love the savory taste, everything. It tastes not like any pizza you have ever tasted. It’s super simple but somehow it delivers!

Below is a photo of Flammkuchen before and after baking. It’s important to get the edges crispy (because they are delicious). 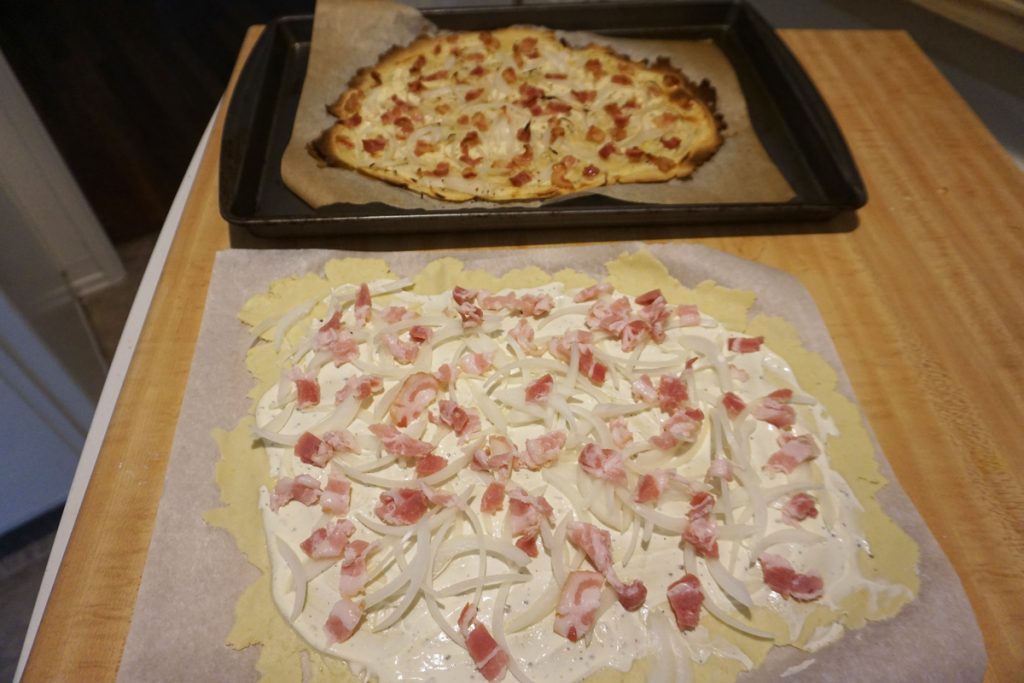 Not exactly low-fat or low-cal…. but it has been on my list of things to make since we got back from our trip. It truly is simple to make and will be in our regular dinner rotation when we are looking for savory, delicious, comfort food at its best!

1. Make the dough: Place the flour, oil, and salt in a large bowl and stir to combine. Using a fork or spoon, slowly stir in 1/2 cup of the water. Continue adding about a teaspoon of water at a time until the mixture forms into a workable dough. (You might not need all the water.)
2. Knead dough: Turn the dough out onto a clean, floured work surface along with any loose flour in the bowl. Knead until all the flour is incorporated and the dough loses its stickiness and becomes smooth and elastic, about 1 minute.
3. Let dough rest: Cover the dough loosely with plastic wrap or a clean kitchen towel and let sit for one hour.
3. Pre-heat oven: Arrange a rack in the middle of the oven and heat to 500ºF.
4. Prepare onion & bacon: Peel the onion, quarter it, and slice it into paper-thin slivers. Cut the bacon strips into 1/4-inch-thick strips called lardons; set both aside.
5. Prepare sour cream: Place the sour cream, salt, pepper, and a tiny sprinkle of nutmeg in a small bowl and stir to combine. Taste and season with more salt, pepper, or nutmeg as needed; set aside.
6. Roll the dough: Sprinkle a bit of flour on a piece of parchment and roll dough into an oval measuring about 10 inches wide by 16 inches long (or the size of your baking tray). Transfer the parchment paper and dough to the baking sheet.
7. Add toppings: Spread the sour cream mixture evenly over the dough, leaving a 1/2-inch border. Sprinkle with the onions, followed by the bacon lardons.
8. Bake until the pizza is well-browned, the bacon fat has started to render and sizzle, and the edges have turned golden and crisp, about 12-14 minutes. Keep an eye on the crust the last three to four minutes to assure edges of crust don't burn.
9. Serve: Remove to a cutting board, slice into squares, and serve immediately.

As an Amazon Associate and member of other affiliate programs, I earn from qualifying purchases. 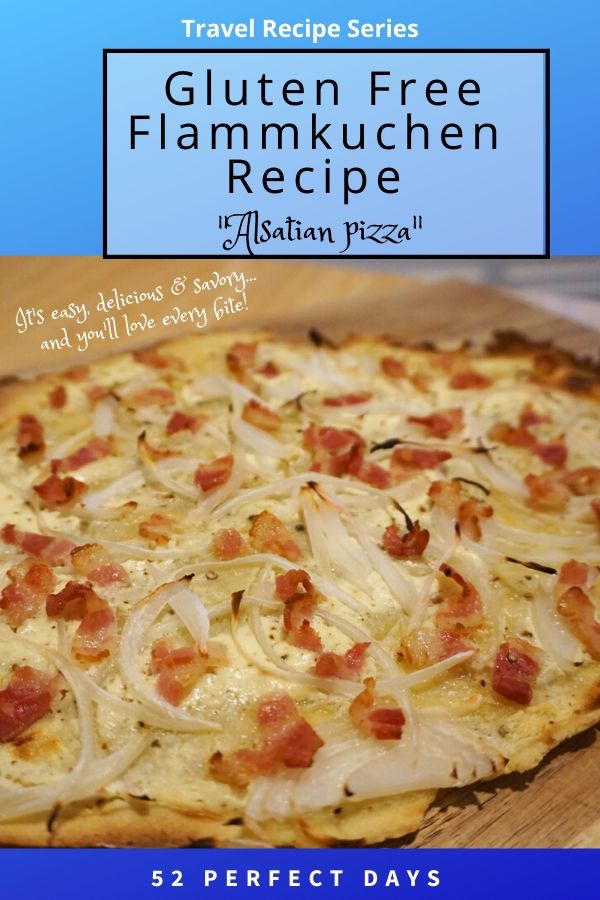 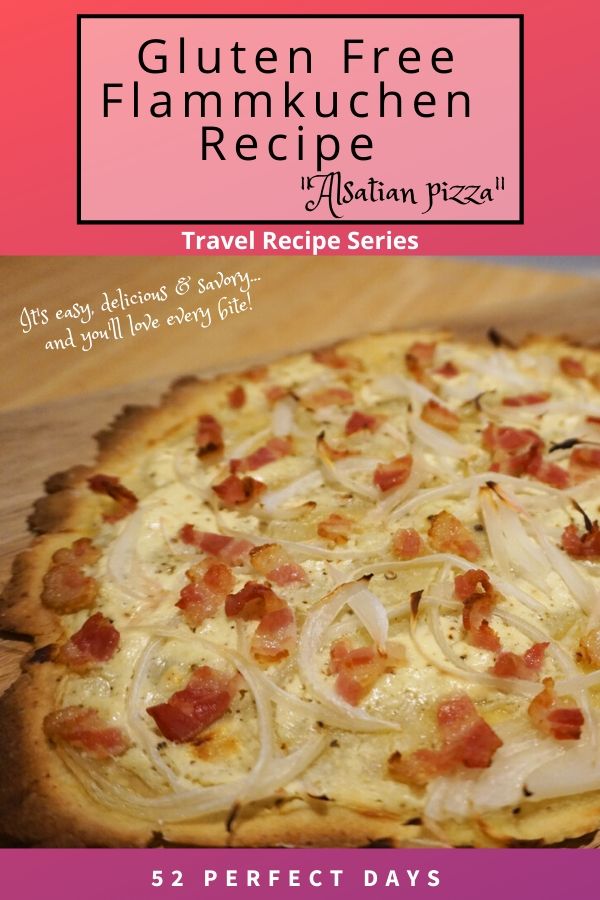 Disclosure: Some of the links on this recipe for flammkuchen post are affiliate links. 52 Perfect Days is a participant in the Amazon Services LLC Associates Program and other affiliate programs designed to provide a means for sites to earn advertising fees by advertising and linking to Amazon.com. This means if you click on the link and purchase the item, I will receive an affiliate commission. Regardless, I only recommend products or services I use personally and believe will add value to my readers.