Wales is so underrated as a country, but it has more castles per square mile than any other place in the world. It has a population of 3 million, of which only 20% can speak the official Welsh language, and there are 4 sheep for every person who lives there. It is the land of King Arthur, the birthplace of the man in which Mount Everest is named, and it competes with Iceland for the most stunning landscapes I’ve ever seen.

So if Wales isn’t already on your European radar, here are four reasons to entice you to visit:

TABLE OF CONTENTS show
4 Awesome Reasons to Visit Wales
1) GET YOUR MIND BLOWN BY THE STUNNING LANDSCAPES
2) GET LOST IN THE LORE
3) FAIL TO PRONOUNCE WELSH WORDS
4) CASTLES, CASTLES, CASTLES!
PRO TIP:

I’ve got a question for you. If someone asked you, “what do you think of when you think of the United Kingdom?” what would you say? A lot of people respond with “England” or “the royal family” or “tea and biscuits.” I used to think along those lines as well until I explored a bit more. Now, when someone says the UK, I think immediately of the gem that is Cymru aka Wales.

1) GET YOUR MIND BLOWN BY THE STUNNING LANDSCAPES 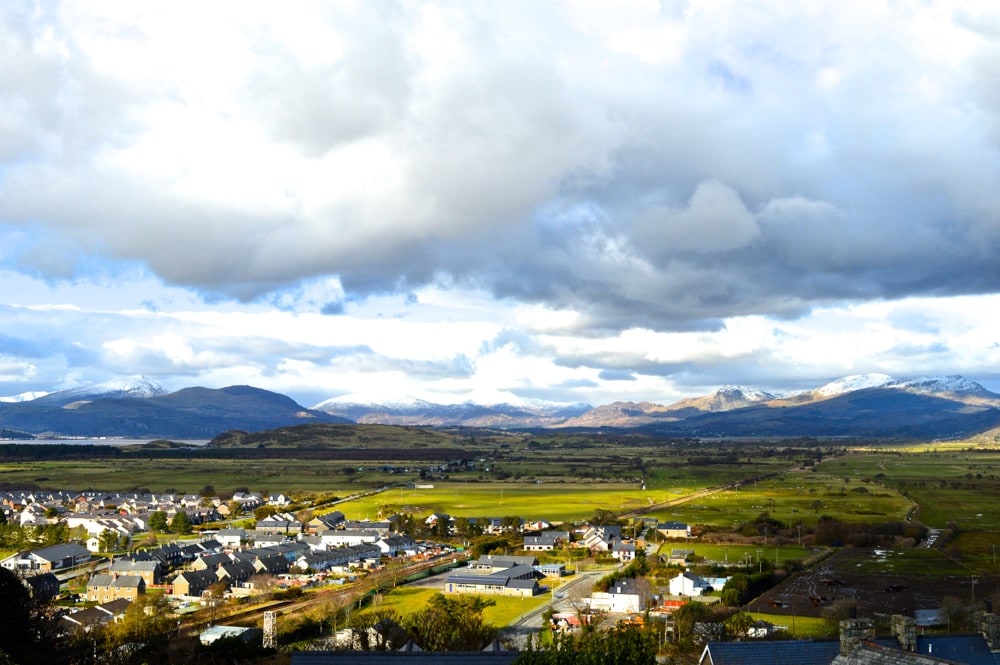 You can see amazing landscapes just by driving through the rural parts of North Wales, but for a real treat, head to Snowdonia National Park. It will stun you with it’s natural beauty no matter what season it is, and the park is home to Snowdon, the tallest mountain in England and Wales. There is an immense amount of outdoor activities to partake in, or for the less active enthusiasts, check out the quaint little towns or historic sites for a taste of something different.

There is also a train that will take you to the top of Snowdon during peak months if you want to see the view but don’t want to hike.

Not unlike the rest of the United Kingdom, Wales is full of old stories and lore that will leave any fantasy lover craving more.

We visited Beddgelert (conveniently located in Snowdonia National Park) to discover the story of Gelert, a loyal hound who has rested beneath a cherry tree since the 13th century and who has since become Wales’ most famous dog. His grave has two stones, both engraved with the legendary story in English and Welsh. Can you read the tale of Gelert from the photo?

There is also a lot of lore regarding King Arthur in Wales, like the 3 lakes that claim to contain Excalibur, or the story of Arthur killing a giant on Mount Snowdon.

What tales will you discover in Wales? 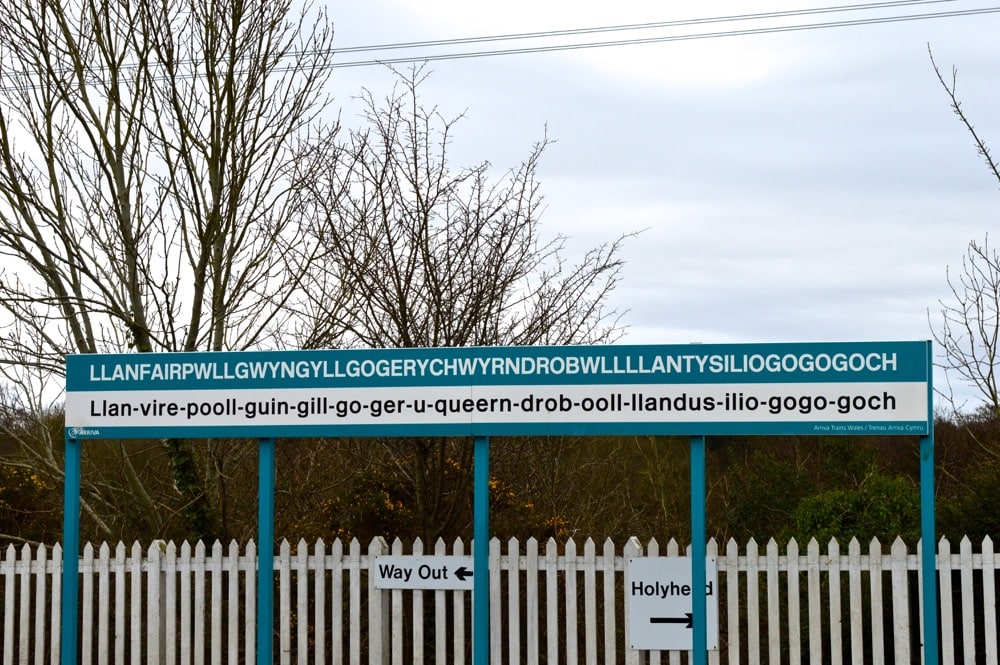 The official language of Wales is Welsh, and it is a confusing set of phonetics that just don’t make any sense. No matter how hard I tried, I finished the trip able to say the names of maybe a handful of places we visited. One of those places was a village with the longest name in Europe, and the second longest name in the world – because ya know, why not?

You may remember a video that went viral a while ago, with a weatherman flawlessly pronouncing the village’s name, making everyone go wild. I can say the first two syllables and then I’m lost. My boyfriend says it flawlessly, just to annoy me lovingly.

Maybe you can turn your trip through Wales into a drinking game, where a failed attempt at pronouncing Welsh word nets you a drink. You’ll be drunk in no time. 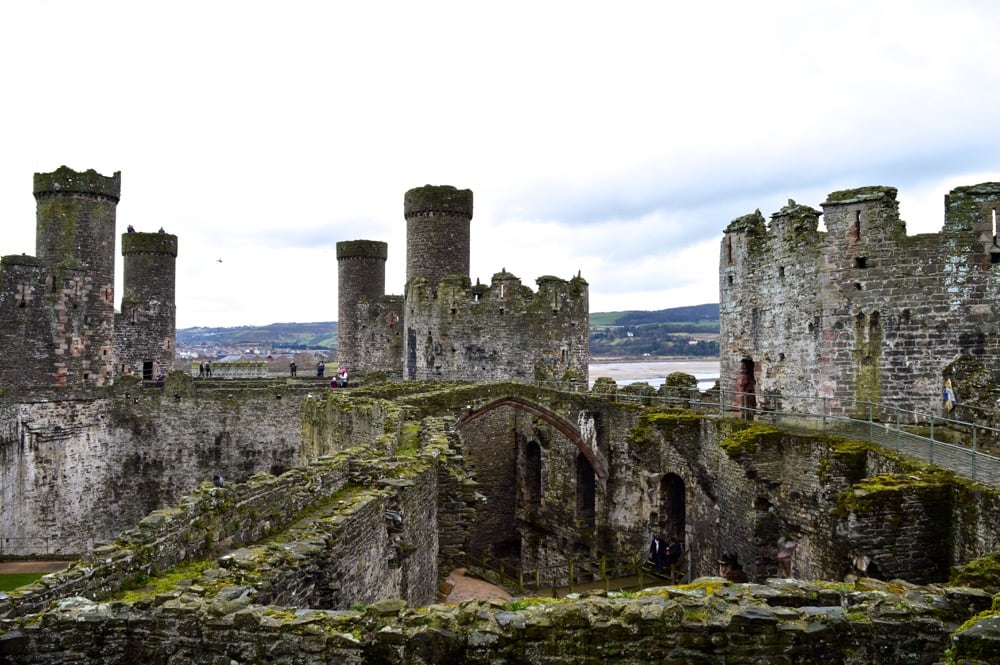 I’ve seen my fair share of castles since I moved to Europe last year, and my favourites so far are in North Wales. They have the added benefit of all being UNESCO World Heritage Sites, so it’s a 2 for 1 exploration deal. (If you’re UNESCO hunting, don’t miss out on the Pontcysyllte Aqueduct, also in North Wales!)

The castles and town walls of King Edward I include Conwy Castle, Harlech Castle, Beaumaris Castle and Caernarfon Castle. Each have their own history, architecture and surroundings to explore, but there’s just a few additional things I’d like to point out:

1) A few minutes walk from Conwy Castle is the smallest house in Great Britain. The house is sometimes open to see the inside, but either way it’s worth a quick stroll to check out the bright red house and take a photo.

2) Caernarfon Castle is massive and need’s a lengthly amount of time to explore it all. The Royal Welsh Fusiliers Museum is located within several floors on one side of the castle and the top of each tower offers different panoramic views. This castle is also where the Prince of Wales has been crowned since 1911, including Prince Charles and one day, Prince William. This castle currently tops my favourites list.

If you’re planning on visiting numerous castles, consider the Explorer Pass for savings, as the British Heritage Pass doesn’t work in Wales.

These reasons are just the tip of the proverbial iceberg that is North Wales! There is so much to see in this part of the country it’s unreal. Bridges, waterfalls, centuries-old tea houses, sea zoo’s; you name it, it’s here. So what are you waiting for? Make North Wales part of your future plans!

My name is Carly, I'm 27 and I'm embarking on the ultimate out-of-bounds world adventure. I've moved abroad to explore Europe in depth and to hunt for as many UNESCO World Heritage Sites as possible - all while completing a full time degree!