Warner Bros VIP Tour, The Best Hot Dog in Burbank and Where to Meet George Clooney

I have a confession. I’m a huge Pretty Little Liars fan. I’m not sure their target demographic, but I’m pretty sure it’s closer to a high school girl than a 40-something mom. That didn’t stop me from binge watching the first two seasons when I found it a few years ago. It also didn’t stop me from continuing to watch the show each new season! I’m sure Aria, Emily, Hanna, and Spencer understand a thing or two about a secret obsession.

So, when my son Roland and I recently visited Warner Bros. for the VIP Studio Tour, I think I did a ‘pretty’ good job of showing a respectable amount of restrained excitement when our guide told us we’d be visiting several locations on the lot used for filming Pretty Little Liars (or PLL for those of us in the know). 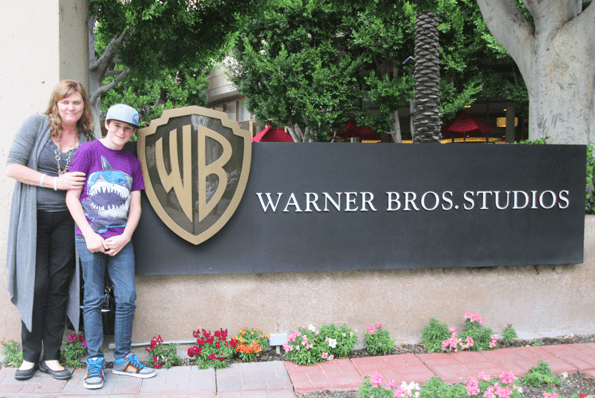 I may be jumping a ‘little’ ahead of myself—but that is what a great show can do—especially one that brings out the 16 year old in you! There I go again.

Okay, I’m sending my inner 16 year old off to dream about Caleb, Ezra and Toby while the 40-something me focuses on the actual tour. Let’s take a step back and start at the beginning. If you want to turn your Warner Bros. Tour into a day of fun in Burbank start with a simple and quick lunch.

Roland and I drove up from San Diego for a one-day excursion and arrived just in time for lunch before our scheduled tour. We headed to the newly opened Dog Haus, just a few blocks from Warner Bros.

They offer a wide variety of gourmet sausages, 100% all-beef hot dogs, Sausages as well as Black Angus beef burgers. They have a fun menu of items such as the “SOOO CALI dog” with wild arugula, spicy basil aioli, crispy onions, avocado and tomato or the “Old Town Dog” which is served with smoked bacon wrapped dog, caramelized onions, roasted jalapeños, chipotle mayo, cotija cheese and corn dogs dipped with house-made root beer batter. You can also choose from their 40 toppings and make your own unique masterpiece. 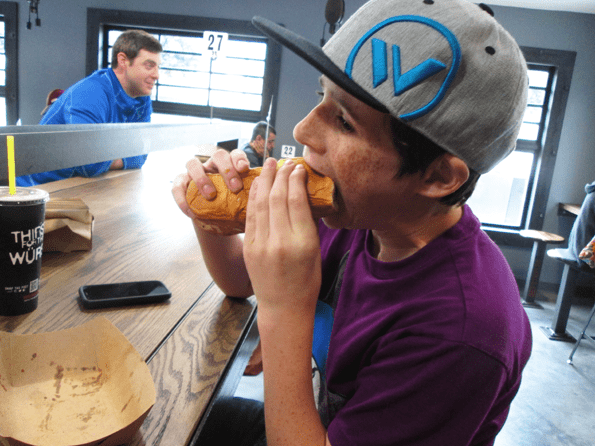 Roland opted for the beef hot dog on grilled King’s Hawaiian bread and topped with his go to ketchup and mustard, while and I tried the “Bad Mutha Clucka”, a chicken fontina sausage with sun-dried tomato aioli, basil, crispy onions served protein style. Delicious, fun and we were lucky to arrive before the lunch rush! 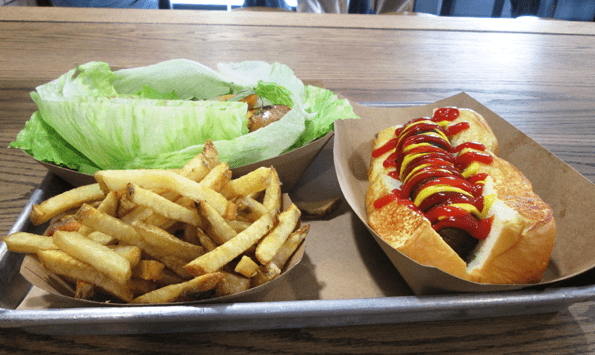 After lunch, we headed to Warner Bros., which is just a few blocks away and checked in for our tour. Tours take off throughout the day between 8:15am and 4pm. The tour begins with a short movie showcasing some of the many highlights of Warner Bros. movie and television history including Casablanca, Harry Potter, Annie, Friends, Looney Tunes and so much more.

Next, we headed to our tram, buckled up and headed onto the Warner Bros. back lot to begin the two-hour tour. This is when our tour guide asked our group about our favorite shows and movies to gauge what kind of facts, stories, and history to share on our tour. So, when he asked “are there any Pretty Little Liar fans? If so you’ll be happy to know we’ll be visiting many location exteriors and a few of their sets today” and instead of screaming like a 16 year-old, I calmly smiled and said ‘that will be fun’ and off we went through the gate of Warner Bros. 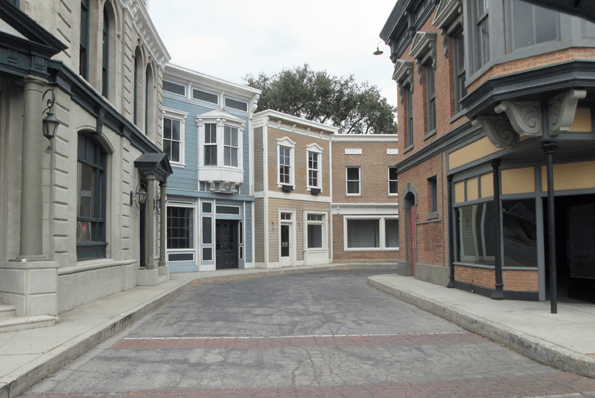 The tour takes place on the working lot, so especially on weekdays there is lots of hustle and bustle. We drove past many of the office buildings that also serve as filming areas. In fact, just about anything on the lot is fair game to be a set for a movie or T.V. episode. There are also sections of the backlot created to look like specific city streets like New York, Chicago and the midwest.

I’ve done this tour twice now, and I was surprised at how different the tours were. From the sound stages we visited, two displays in the car museum and displays in the film museum and the guide each tour was truly unique. On my first trip to Warner Bros. we stopped and toured the Big Bang Theory set, while on my recent trip we visited the Ellen set, the prop departments and yes, Spencer and Hanna’s houses from Pretty Little Liars.

The soundstages are really fun to see firsthand and to find out that there is no running electricity or water to what appears to be fixtures or sinks and to see there are no ceilings. What is also really fascinating is the exteriors of locations as well. For example, one building can have four different facades. One side could be a church, another an entrance to a house while another side could be school. It’s also fun to learn about how many of the buildings and streets on the lot are re-purposed to create a completely different look depending on the movie or show.

For me, the Studio Museum was a highlight on both tours. Upstairs is a permanent exhibit from the Harry Potter franchise that includes costumes and props from the movie as well as wax figures and even the sorting hat.

The first floor showcased Batman during our current and this exhibit will be on display through May 2015. It’s a chance to see the costumes including six Batsuits and gadgetry from all seven movies. Also on display are a wide range of costumes worn by Poison Ivy, The Riddler, Mr Freeze and Catwoman as well as some infamous prop weapons such as the Joker’s cards, Two-Face’s coin, Penguin’s umbrella and Bane’s bomb. 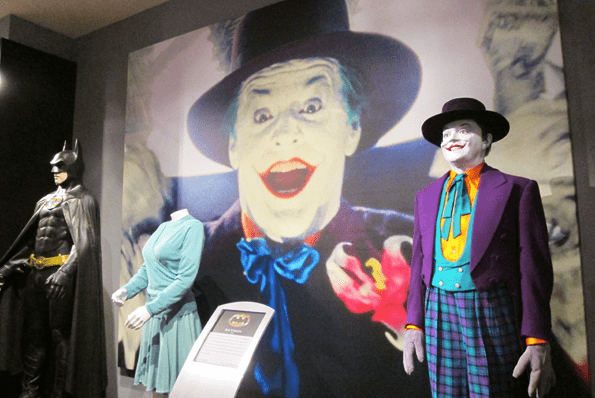 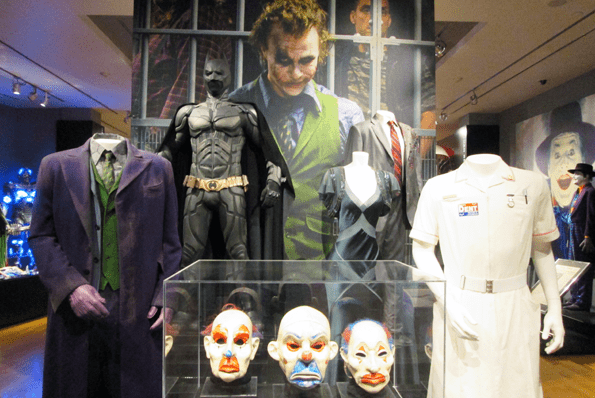 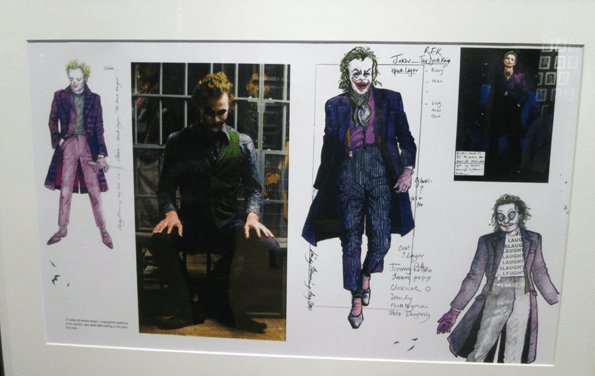 In the car museum, which is currently also showcasing the Batman franchise, we got to check out some of Dark Knight’s vehicles and motorcycles which Roland loved. There was also a chance to see how greenscreen technology works and get a souvenir photo. You can check out my photo with Roland on his article about Warners Bros. and be the judge if he is pushing me in front of the Batmobile or pushing me to safety!

All in all a super fun way to spend a few hours and learn about movie and television history at one of the iconic movie lots in the world.

If you didn’t happen to see a celebrity during your tour you might want to head across the street to the Smoke House. Established in 1946, it’s a longtime favorite hangout for actors, producers, and anyone else in the industry. And our tour guide told us that if you visit, chances are, you’ll run into at least one celebrity while you dine and confirmed the rumor that George Clooney loves the food so much here, he started a production company called Smokehouse Productions. So, next time you visit Smoke House and you bump into George, tell him Alexa from 52 Perfect Days said to say hello!

We have a lot more photos from our Warner Bros VIP Tour, so if you go to the @52Perfectdays Instagram account you can see them all.

Tour Hollywood with the Stars