Looking for one of Hollywood’s best singles hot spots? Head to Runyon Canyon around 10:30 on a sunny morning for free yoga and a chance to meet some of the coolest of the cool people in Los Angeles. A hidden jewel just above Hollywood Blvd, Runyon Canyon is a 134-acre park that ascends up to Mulholland Drive, the hilly ridge that divides LA from the Valley.

Trails afford breath-taking vistas over LA’s sprawling cityscape…not to mention the beautiful people who frequent the park which is abuzz with hipsters, actors, trainers, and dog walkers. It’s one of the trendiest locations for singles to work out, check out and find that perfect date.

Start your day with an hour of free yoga in the park. Head to the grassy enclosed area next to the entrance where you will find the teacher du jour and students gathering.

Although, there is a rotating teacher pool, one of the most colorful is Daniel Overberger, a trim, heavily tattooed instructor who leads his followers through the asana routines on Monday, Wednesday and Friday.

“Proud Warrior!” he commands. All of us take the position in unison.

Some are still hung-over from a night of clubbing and a bit more pathetic than the requisite proud.

“Right arm pointing south, yeah! Shoot some positive energy right out of your fingertips toward Hollywood. They need it down there.” Dutifully, everyone stretches deeper into the position.

“Now with your left arm pointing north pull some of that creative energy down from Burbank and Universal City.” The crowd of aspiring actors, screenwriters, and models groan as Daniel puts them through the motions.

Note: If you come for the yoga, bring a mat or a beach towel and meet in the fenced-in children’s play area just inside the main entrance (weather permitting).

Limber and warmed up, it’s time to tackle one of the many hiking trails that winds the canyon up to Cloud’s Rest- a scenic point halfway up the trail. Take one of the steepest trails if you are in good shape so you can safely navigate the trail’s uneven steps and sometimes slippery incline. A more leisurely, paved path snakes west to the other side of the Canyon.

When you make it to the top of the hill, stop for a rest at the wooden bench overlooking the entire Los Angeles basin is the reward awaiting the undaunted hiker.

Don’t be surprised if have to share the space with a model from Austria discussing upcoming fashion shows on her cell in German or a couple of thirty-something writers discussing the finer points of the writer’s strike that’s presently the talk of the town. It’s all part of the experience.

Star sightings are frequent here, including Cameron Diaz, Sandra Bullock, Edward Norton, and Jennifer Lopez, who have been spotted accompanied by their personal trainers and incognito behind sunglasses and baseball hats.

And finding your next date? No better way than with a dog. I meet up with my friend Richard who walks his black Labrador here daily. Just as we were heading for the next trail, two attractive young women with their dogs came down the hill towards us with dog in tow.

“Is this a labradoodle?” Richard inquires. Pleased, the very pretty girl nods. In a moment they are both engaged in an animated discussion of the advantages of this breed (a cross between Labrador and poodle that’s the fashionistas’ dog du-jour in LA).

“Well, I’ll see you around tomorrow, same time?” Richard inquires. “Yes, I’ll be here” she assures him. Richard shoots me a knowing glance. He never hangs out in bars to pick up women. Runyon Canyon is where he rules. 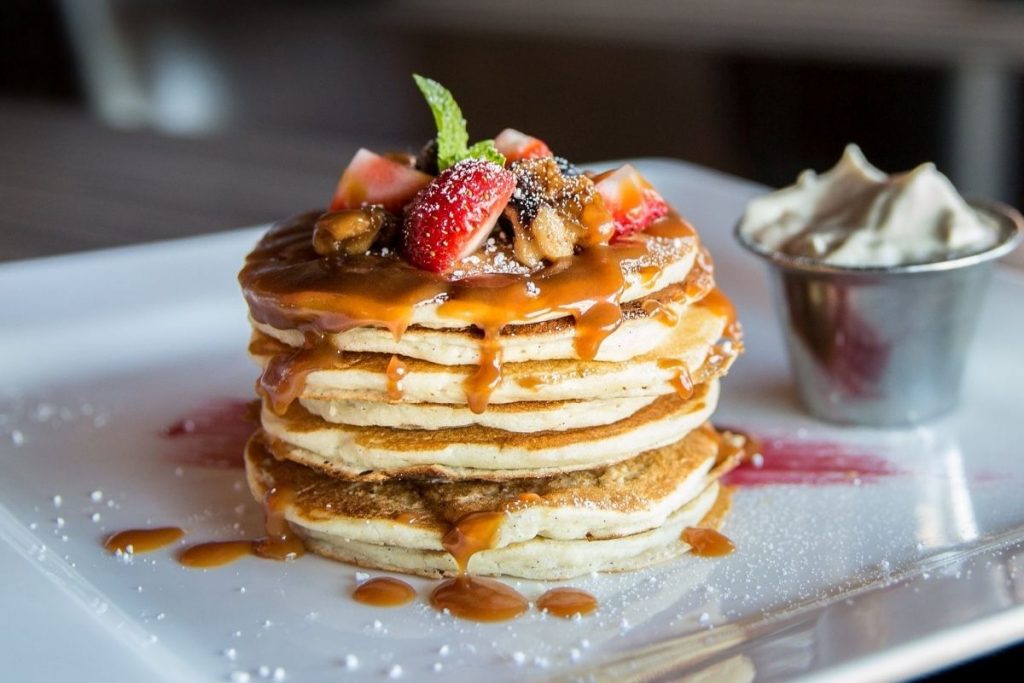 After a morning of yoga, hiking, and possible flirting head to the Hot Griddle Cafe for a late brunch. Located on Sycamore, just five minutes from Runyon Canyon, it’s a place to see and be seen.

Although very low-key it tends to be populated by the entertainment crowd and a celebrity hot spot and it is said that Mischa Barton, Apple, Bob Saget, Adam Levine, and many others enjoy breakfast here.

The fare is standard American at a good price. The pancakes are humongous and the eggs benedict divine. Squeeze into one of the red-leathered booths and check for any Lana Turner look-alikes, as the place also has a bit of the legendary Schwab mystique of the 21th century.

After star breakfast and some stargazing, finish up your perfect day in the Hollywood limelight with a cruise along Hollywood Boulevard. Who knows, you may be discovered yourself!

Helpful Information: Free yoga classes are offered at Runyon Canyon every single day of the week at 10:30a.m. Many leave a small donation in the instructor’s gym bag, though it is not required.