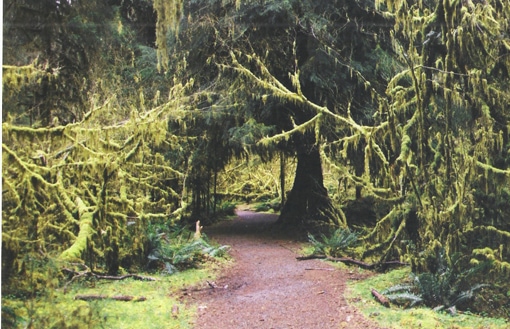 Rain, rain, and more rain. That’s probably the first thing that pops into your mind when someone mentions travel to the Pacific Northwest. You should be wary of the connotation, otherwise, you will miss one of the most beautiful and vibrant natural landscapes that the United States has to offer.

Set the alarm for early in the A.M., grab an extra-large cup of coffee from the Seattle stalwart, Starbucks, which are everywhere in the area, and head south on Interstate 5 en route to Highway 101 West toward Olympic National Park. The early morning sun should just be breaking over the horizon, quietly tingeing the misty fog with orange, rusty hues.

Typical of the Pacific Northwest, the weather patterns can change frequently from mile to mile, with the sun occasionally poking its head out of the clouds to reaffirm its’ existence. The misty rain, which provides important fuel for Olympic National Park’s Hoh Rain Forest, can be ever-present but is never overbearing. Come prepared with a light raincoat and good windshield wipers and you will barely notice it.

Moving along Highway 101, enter the almost one million-acre park. The majestic Sitka spruce and fir trees, which dominate the landscape, help you to understand why Olympic National Park has been declared ninety-five percent wilderness. Kristi Agren, Director of tourism and marketing for the North Olympic Peninsula Visitor and Convention Bureau, believes that this designation further protects the diverse ecosystems in Olympic National Park. These majestic trees line both sides of the winding road acting like noble sentries guarding the emerald-colored path. Water glistens on their limbs and pine needles while the deep brown tones of their trunks accentuate the forest green.

Olympic National Park is also known for its biological diversity according to Agren, “It has been isolated for eons by glacial ice, and later the waters of Puget Sound and the Strait of Juan de Fuca, the Olympic Peninsula has developed its own distinct array of plants and animals.” Scientists have identified eight kinds of plants and fifteen kinds of animals, which are found nowhere else on the Earth, such as the Olympic Marmot and the Olympic Snow Mole.

After an hour of driving, Highway 101 curves to the roaring ocean, offering a beautiful vista of the Pacific Ocean. When you reach this point, you will find a number of points along the road to park. From here walk about 100 steps down one of the many trails to the unspoiled beach leading you to the picturesque landscape first viewed by the Pacific Northwest’s earliest settlers. Uprooted trees, smoothed by the sand and rollicking ocean waves, dot the shoreline like flowers in a meadow. You can’t help but wonder how many times the indecisive currents of the Pacific had moved and stacked these giant logs along similar beaches up and down the coast.

Afterward, continue on Highway 101 to the Hoh Rain Forest- the largest rain forest in the continental United States- and official World Heritage Site. A quick trip down this eighteen-mile side road takes you to an interpretive center and trails running through a rain forest that averages 140 inches of rainfall each year. The greenery in the Hoh Rain Forest explodes in a multitude of colors. Moss covers every inch of some trees, hanging loosely like beards from the branches. Exquisite ferns sprout unabated from every corner of the forest. Towering Western Red Cedars break through the greenery in patches offering a glimpse of the trees that can grow to be 200 feet tall. Hike the 1.25- mile Spruce trail; the sheer number of competing ferns, moss, and trees are awesome, each carving out its’ own space in the enriched landscape.

Once back on Highway 101, continue north past the town of Forks to another spur in the road, which leads to Sol Duc Hot Springs. The twelve-mile trip will take you to natural hot springs and the home of Sol Duc Hot Springs Resort. Willowy puffs of steam rise off the beautiful warm water tempting visitors like a siren leading sailors to the rocks. Old Native American legend claims the springs were formed from the tears of two crying dragons that battled to a stalemate. After a full morning of exploring, you will be ready to enjoy lunch. Stop at the Springs restaurant or shop at the on-site grocery store for picnic supplies.

Next travel thirty miles to Hurricane Ridge. Pass the beautiful royal blue waters of the Strait of Juan de Fuca, as you head for its turnoff. The drive takes you from the lowland forest and the Olympic National Park Visitor’s Center to the upper mountain ridges. With glacier-capped mountains, abundant wildlife, and river valleys below, this is a place worth visiting. For those with extra energy and desire, a steep, but the easily manageable trail, offers exquisite views of the park as well as an explanation for the name, Hurricane Ridge. Hiking the winding trail, you see spruce and fir trees growing parallel to the ground instead of skyward because they are constantly pelted by fierce winds.

Once down from Hurricane Ridge, make the last loop back towards Seattle. On the way, you will pass Lake Crescent, a deep freshwater lake rife with Beardslee Trout, crystal clear water, and beautiful mountain views. Glaciers carved these deep recess long ago and it is not uncommon to see a colorful rainbow stretching from one side of the lake to the other. Marymere Falls, a cascading waterfall, is less than a mile from Lake Crescent.

Once onto Bainbridge Island, Docks Marina Grill is an excellent choice for dinner. Choose from salmon ravioli, the pepper bacon bleu cheeseburger, steamed mussels or clams, while enjoying one of their signature cocktails; the vodka-based Docks Cooler or the Dock Mai Tai on the deck overlooking the marina.

Afterward, board the ferry for Seattle. Enjoy the wonderful view of the approaching Seattle Skyline while cruising the cold waters of Puget Sound. Your day trip to Olympic National Park is complete.

www.forkswa.com offers general information about Forks, Washington, a town in the western portion of Olympic National Park. This site also allows you to plan other activities for your trip.

www.olympicpeninsula.org offers a visitor’s guide to Olympic National park complete with an event calendar and a travel planner.

About the Author Michael Bret Hood