Why Kansas City, Missouri Should Be On Your Bucket List

As far as destinations, Kansas City, Missouri may not be at the top of your bucket list.  It never was on mine.  But I was there recently with my daughter who was dancing in a show, and found it had a lot to offer.

We stayed at the Hotel Phillips, two blocks away from the theater where she would be performing.  Built in 1931, the 20 story, 450 room hotel retains its old time look and feel, from the small elevators with wooden walls and ceilings, to the walnut woodwork behind the front desk, and tin ceilings in the spacious lobby.

Save Big on Your Kansas Vacation

Check out the Top Tours & Day Trips from Kansas

Read Reviews of the Best Hotels in Kansas on TripAdvisor 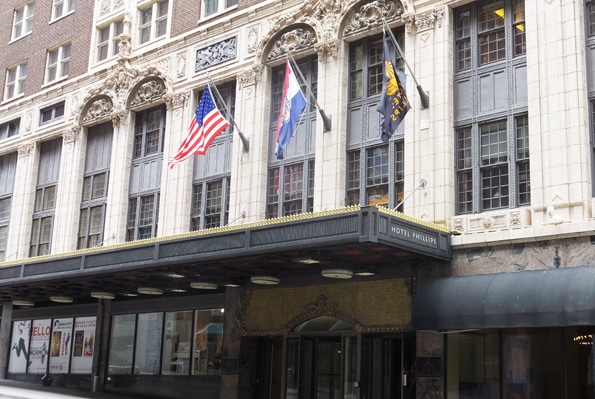 Renovated in 2001, the hotel contains all of the modern conveniences of a newer hotel, including free wifi, fitness center, and restaurant.  The rooms are spacious and comfortable with thick wooden blinds on the windows behind which are sprawling views of the city.  Ask for a room near the top if you want a view.

The Folly Theater in downtown Kansas City where she was performing is the oldest theater in Kansas City.  Once a famous burlesque and vaudeville venue, it now hosts a number of performing arts such as musicians, choirs, musicals, dance, and children’s events.  Close to being demolished in 1970, a local preservation group saved the historic building from the wrecking ball returning it to how it looked in the 1930s.  It now sits on the National Register of Historic Places, along with the Hotel Phillips. 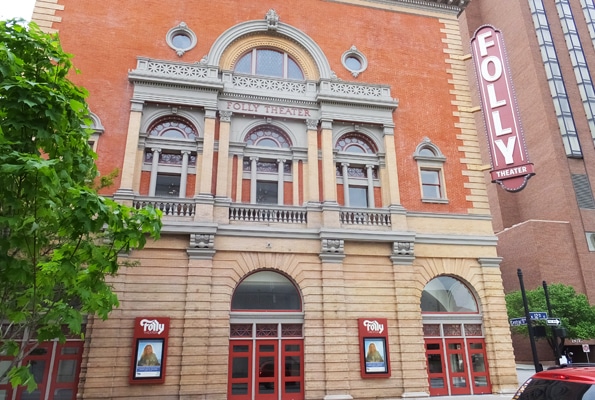 During the building’s renovation, 150 boxes of business records, photos and performer contracts were discovered in the basement.  They were donated to The Kansas City Public Library who is cataloging them and preparing a display.  If you are interested in seeing how much Gypsie Rose Lee was paid for her show in 1930, it would be worth going back to see when finished.

With my daughter at rehearsal, I explored downtown Kansas City.  Blocks from the hotel I discovered Costeninos Downtown Grocery Store.  This store had everything from Kansas City souvenirs, to a cafeteria style hot food bar, prepackaged cold food, a salad bar, grocery store, wine and alcohol, along with a place to sit and eat.

Above the wine area, the ceiling was painted in rich colors and motifs, in the style of Michelangelo.  A plaque nearby explained the store’s founder, Dante Cosentino, designed and painted exquisite interiors for churches in the Kansas City for thirty years. 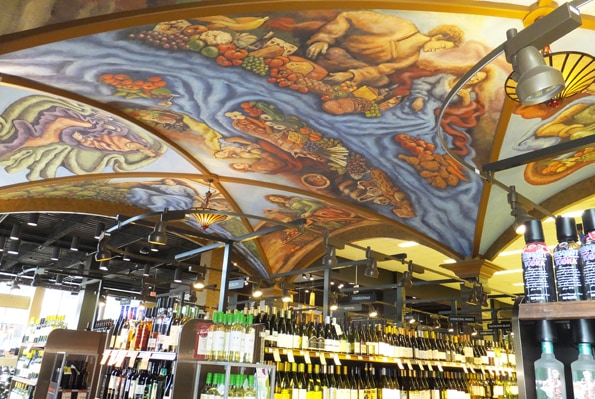 Next I headed for the Power and Light District, a newly developed 8 block area of bars, restaurants, and shops, also near the Hotel Phillips.  When I arrived a five piece band was belting out Purple Rain from a massive outdoor stage.  A sea of brightly colored t-shirts, sectioned into color groups, dotted the landscape.  Bars and restaurants surrounded a large open air area with places to sit or stand.  Stairs on both sides led to an upper level for viewing the stage from the second story.

Then I noticed the beer.  Cups of beer, pitchers of beer, and large plastic toys that looked like giant syringes loaded with what was probably beer.   In search of something interesting in Kansas City I had discovered the world’s largest pub crawl!

I found out later this hugely popular event, Crawl for Cancer, began in 2001, and in 2013 made the Guinness Book of World Records for most people on a pub crawl, with 4,885 participants.

Some groups had themes.  There were islanders with grass skirts and leis, pool boys with kids blow up seahorse rings wrapped around their necks boy/girl scouts, wearing olive green tees with merit badge vests and sashes, smurfs in royal blue shirts, faces painted white with white pointed caps on their heads.  As I was leaving a group of about ten guys, wearing neon green t-shirts, white pants, black boots, and polo hats galloped in on stick horses.

From a performance in a historic theater, to a stay in a boutique hotel, to a bit of Europe in a grocery store, and a world famous pub crawl, Kansas City has a lot to offer.  I just may put it on my bucket list.  Perhaps you should too.

Kim is an aspiring travel writer/blogger. Her love of travel began with visiting most of the United States on family vacations as a child. She started her blog, travelsthroughmidlife.com after being inspired by Alexa Meisler’s podcasts “Break Into Travel Writing”. She has two grown daughters and lives in a suburb of Chicago with her husband.

About the Author Kim Hartmann

Kim is an aspiring travel writer/blogger. Her love of travel began with visiting most of the United States on family vacations as a child. She started her blog, travelsthroughmidlife.com after being inspired by Alexa Meisler's podcasts "Break Into Travel Writing". She has two grown daughters and lives in a suburb of Chicago with her husband.