Whether you’re an athlete or an avid spectator, Colorado Springs has plenty to offer. Just 70 miles from Denver and home to the Olympic Training Center and a handful of sports halls of fame, the Springs is a gold mine of activities for the sports enthusiast. Get ready for an action-packed perfect day. 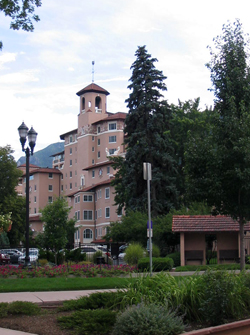 For luxury accommodations and more on-site activities than can possibly fit into your day, stay and play at The Broadmoor. Golf, tennis, biking, swimming, yoga, horseback riding, fishing, rock climbing, hot air ballooning are all available. I’d say they have it all, but they closed the sport clay shooting range about a decade ago. The resort earned the Forbes Travel Guide Five Star Award for a record 50th consecutive year in November, an achievement no other luxury property can claim.

Even though The Broadmoor is Colorado Springs’ premier resort, it’s worth venturing away from the grounds to explore the city.

Begin your day of with coffee and a pastry from Pikes Perk. You’ll want to get an early start because your next stop is the Garden of the Gods. The park opens at 5 a.m., but time your arrival with the sunrise—you won’t be disappointed. Bike, hike or drive through the park, but don’t miss the chance to see the early morning sun glinting off the red rock formations. The views are absolutely stunning and chances are you won’t have to share them with many other visitors early in the morning.

Roll back into town for lunch at the Phantom Canyon Brewing Company. Started by Denver’s own restaurateur-turned-Mayor John Hickenlooper, the restaurant brews its own beers and root beer and serves up some killer pub fries.

Coast through the afternoon with tours of the U.S. Olympic Complex and the World Figure Skating Museum and Hall of Fame. The Olympic Complex can host up to 150 athletes. With the 2010 Vancouver Olympics around the corner, you can bet those dorm beds are full.

Although Michael Phelps trains at his Alma Mater, the University of Michigan, he has spent a few weeks training at the Colorado Springs facility the last few summers. To accommodate swimmers as well as water polo teams, the training center’s pool is shaped like an inverted pyramid—two meters deep at either end, sloping down to three meters in the middle. It is kept at a balmy 80 degrees.

The training center is also home to the largest indoor shooting range in the Western hemisphere and third largest in the world. Tours of the complex are free and begin at the top of every hour between 9 a.m. and 4 p.m., Monday through Saturday.

Olympic glory doesn’t end with your Olympic Complex tour. Head back toward The Broadmoor and visit the World Figure Skating Museum and Hall of Fame. Entrance to the Hall of Fame is free for United State Figure Skating Association members and $5 for everyone else. Tours are self guided so it’s worth setting aside at least an hour and a half to tour both floors of exhibits. Pictures from key moments in figure skating history, costumes, equipment and Olympic memorabilia are all on display.

Don’t be surprised by the Olympic-sized appetite you’ve worked up during your perfect day. Head back to the Broadmoor to sate your hunger at the Golden Bee. The pub’s authentic décor was brought across the pond in pieces and reassembled to create a 19th century English pub in Colorado Springs. Go for the relaxed atmosphere and stay for the nightly sing along. The Piano Man turns up nightly to play favorite drinking songs and audience requests. Raise your voice with the crowd and quench your thirst with a foot or yard-long beer—a Golden Bee signature and the perfect night cap for your perfect day.

Maura O’Neal has lived in Denver for three years and is still finding new things to do in and around the Mile High City. When she is not out exploring her own neighborhood, she works as a flight attendant to support her international travel habit. Visit her blog at http://travelsabound.blogspot.com.