Top 52 Things to do in Santa Monica

Alexa —
TABLE OF CONTENTS show
52 Things to do in Santa Monica
WHEN TO VISIT SANTA MONICA
Traveling To Santa Monica Soon? Here are a few tips:
6 Indispensable Items to Pack for a Santa Monica Vacation
Read More About California
A California Weekend Road Trip With The 2018 Toyota RAV4 My 800-Mile Walk to California’s 21 Historic Missions Is Monterey California’s Best Kept Secret?

52 Things to do in Santa Monica

2. The Zagat Guide declared Santa Monica as one of the best neighborhood areas for great restaurants in all of Southern California.

3. There are no restaurants in the city of Santa Monica that require a jacket or tie.

4. The longest beach path of its kind in the world begins in Santa Monica and travels 22 miles south to Torrance.

5. Santa Monica is just 8.3 square miles in size and is known as a walkers paradise

6. Visit the world-famous Santa Monica Pier, which is over 100 years old, where there are festivities planned all year long.

7. Enjoy a mirror-and-lens panorama that has documented Santa Monica for more than 100 years at the historic Camera Obscura in Palisades Park. Turn the wheel of the rooftop turret and the city unfolds with 360 degrees of seaside bliss.

8. Slip into a live seaside concert showcasing top world-beat talent at the winter and summer concerts at Santa Monica Pier. The “Annual Twilight Dance Series” kicks off at sunset each Thursday from July through early September.

9. Ponder the city’s impressive line-up of public art, from the surreal “Whale of a Mural” to the “Wave and Shell Obelisks,” which spent five years fossilizing under the sea. More than 30 public pieces of art grace the city; see the Art Trek Map for a complete listing. 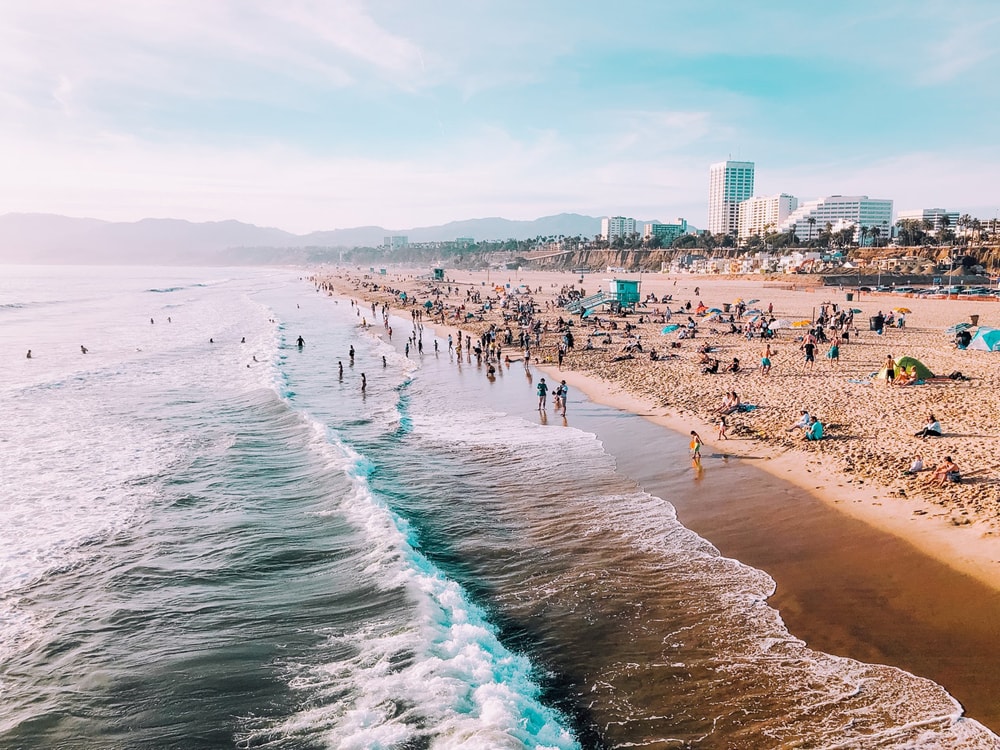 10. Stretch your vision across the Pacific aboard the 14-foot “Singing Beach Chairs.” These two harmonically tuned chairs, designed with an oversized lifeguard look, are a great perch along Santa Monica State Beach just south of Santa Monica Pier.

12. Take to the trails in Santa Monica National Mountains Recreation Area. Hike, bike, picnic or ponder the Pacific along the miles of meandering trails.

13. Re-live some of your favorite golden on-screen moments at the Aero Theater on Montana Avenue where an impressive array of classic movies like Breakfast at Tiffany’s, Some Like It Hot and The Godfather trilogy are shown regularly.

15. Gallery gallop through Santa Monica’s 75 museums and galleries, which are generously distributed throughout the city. Bergamot Station offers more than 40 top-flight contemporary galleries in one industrial-style setting.

16. Pique your palate with a visit to one of the city’s three farmers markets. Rated one of the top in the nation, the Third Street and Arizona markets feature organic and exotic produce, florals and herbs in a bustling European-style setting on Wednesdays and Saturdays. The Santa Monica Airport market runs on Saturdays and Main Street comes alive on Sundays with plenty of edibles and face painting for the kids.

18. Fall into a film — Santa Monica is a favorite Hollywood backdrop, especially along scenic Ocean Avenue where TV’s Snoops, Pacific Blue and films such as Jerry McGuire, Get Shorty, Pulp Fiction, and “Speed” were filmed. Annually, the city issues more than 1,000 filming permits. Some of the most recent films are Freaky Friday and Matchstick Men.

20. Meander through lush tropical gardens on a sunny afternoon at Palisades Park, the scenic cliff-top park set on 25 acres overlooking the Pacific.

21. Launch a kite in the sky, build sandcastles or catch an impromptu game of volleyball at one of two world-class beaches: Santa Monica State Beach and Will Rogers State Beach.

22. Check out ex-pats in a lawn bowling bash at Douglas Park. Situated at the corner of Wilshire and Chelsea, this park features three fishponds, a children’s playground, picnic tables and tennis courts. Free bowling lessons for adults.

23. Pump up your pecs at the three-acre, open-air gym located along Santa Monica State Beach – self-tanning included. The original Muscle Beach, which launched an international fitness craze in the 1930s and 1940s, was restored to its original grandeur in 1999.

25. Soak in a sizzling Santa Monica sunset at the foot of historic Santa Monica Pier (1909). The back staircase offers a prime Pacific view as the sun slips into the ocean.

26. Witness stunning views through the sweeping wall of windows whilst sampling delicious appetizers and sipping on martinis at the Penthouse, at The Huntley Hotel.

27. Route 66 – the most famous historic road in America officially ends at the Santa Monica Pier, however other sources claim this is not the technical end to the route. They say the route ends either at the intersection of Santa Monica Blvd and Ocean Avenue or that the route turned south on Lincoln Blvd and ended at Olympic Blvd. Either way the Pier with the view of the Pacific is the true spiritual end of Route 66.

28. Santa Monica is home to Bergamot Station, an internationally recognized arts destination and one of the greatest concentrations of galleries in Southern California.

29. The Santa Monica Civic Center Parking Garage is set to become the first ever LEED-certified building of its kind. (Leadership in Energy and Environmental Design)

31. Santa Monica is recognized as one of the top ten sustainable cities in the USA

32. Skateboarding as an extreme sport originated in Santa Monica

33. Muscle Beach in Santa Monica was the birthplace of the physical fitness movement in the USA.

34. Santa Monica High school featured in “Rebel Without a Cause” featuring James Dean and Natalie Wood.

37. Yoga at Yoga Works
Find your center! A single class at Yoga Works located on both Montana Avenue and Main Street in Santa Monica costs $18.

38. Bike Rentals at Perry’s
Rent a bike for the reasonable rate of $8 an hour or take the Legends Beach Bike Tour. See you at the beach!

43. Bodega Wine Bar
Wine lovers can enjoy the $8 glasses of wine and the $20 carafes at this Santa Monica favorite.

44. Bonjour Nail Salon. Indulge in either a manicure or pedicure at this popular Montana Avenue nail salon.

45. Laemmle’s Monica 4-Plex
Watch the latest independent films, such as. Nothing goes better with a movie than fresh popcorn.

47. Santa Monica Pier Carousel
For the kid in all of us, stop by the pier and enjoy a ride on the famous Carousel.

49. Happy Hour at Busby’s
Watch your favorite sports team and wash down a pint at this popular sports bar

50. Prepare for take off and dine with breathtaking views at The Hump, the Japanese restaurant and sushi bar at the Santa Monica Airport. Named after the aviation slang term for the Himalayas this is a truly unique dining experience where both the food and the setting have style and panache to write home about!

52. High style hits the Californian coast with the Annenberg Community Beach House. This new beach club is a five-acre oceanfront property that is currently being restored from its former glory as a prime ‘Gold coast’ hotspot to become a popular public hangout.

WHEN TO VISIT SANTA MONICA

My favorite time of year in Southern California is early fall. September and October have gorgeous weather and you’ll find it’s much less crowded. Summer is a great time as well for weather, but you will find lot’s of crowds and most likely increased hotel prices.

If you enjoyed this article about the Top 52 Things to do in Santa Monica, you’ll also love A California Weekend Road Trip with The 2018 Toyota RAV4.

Traveling To Santa Monica Soon? Here are a few tips:

Where to stay: There are many places to stay in Santa Monica. There is a wide range of hotels, from budget to luxury. For a luxury hotel that won’t break the bank, I recommend the Shore Hotel, which is currently the #1 hotel on Tripadvisor. For a mid-level hotel, I suggest the Fairmont Miramar Hotel & Bungalows.  Finally, for a budget hotel, try the Hotel Carmel. You can also check HotelsCombined for the best Santa Monica Hotel Rates.

What to pack: When considering what to pack on your Santa Monica vacation, don’t forget your swimsuit! After all, you are going to the beach. The ocean may be too cold for swimming in regular trunks during winter months, but you’ll see plenty of people wearing a wetsuit for added warmth (you can rent these from surf shops along the waterfront). From late spring to early fall, however, you definitely can swim in a bikini or swim shorts.  Don’t forget to bring Sunscreen!

6 Indispensable Items to Pack for a Santa Monica Vacation