52 Best Things To Do in Fort Worth, Texas 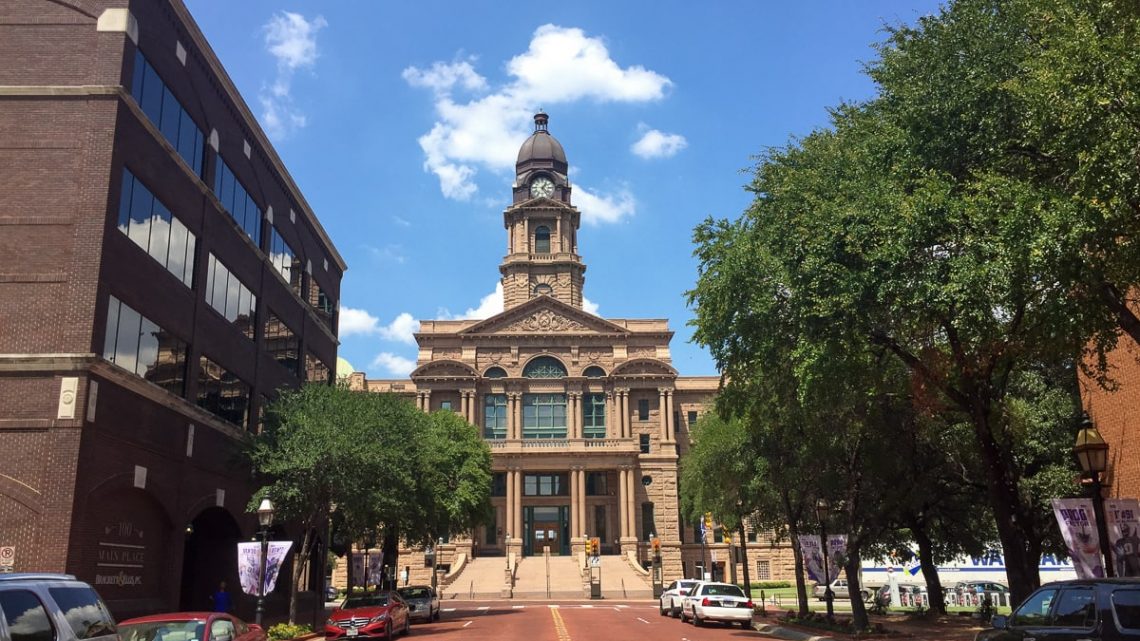 Known for its cowboys, culture and larger than life Texas Margaritas, you’ll find a wide range of fun things to do in Fort Worth.

Save Big on Your Fort Worth Vacation

Check out the Top Tours & Day Trips from Fort Worth

Read Reviews of the Best Hotels in Fort Worth, Texas on TripAdvisor

TABLE OF CONTENTS show
Things To Do in Fort Worth
Where to Stay in Fort Worth: Find the Best Hotel for Your Budget
What is the best time to visit Fort Worth?
Top Tours in Fort Worth
Recommended Travel Resources
More Things to Do in Texas!
24 Things You Probably Don’t Know About El Paso, Texas
Exploring the El Paso Mission Trail

Things To Do in Fort Worth

Fort Worth thrives on its Cowtown history, as well as its oil, gas, and aviation industries. I have fallen in love with Fort Worth since we moved here in 1993 and I love sharing my town with visitors. Here are 52 of my favorite things to do in Fort Worth, Texas!

1. Sundance Square in friendly Fort Worth is the safest, most diverse downtown in America, offering restaurants, hotels, entertainment, boutiques, shopping, museums, and more along red-brick streets. 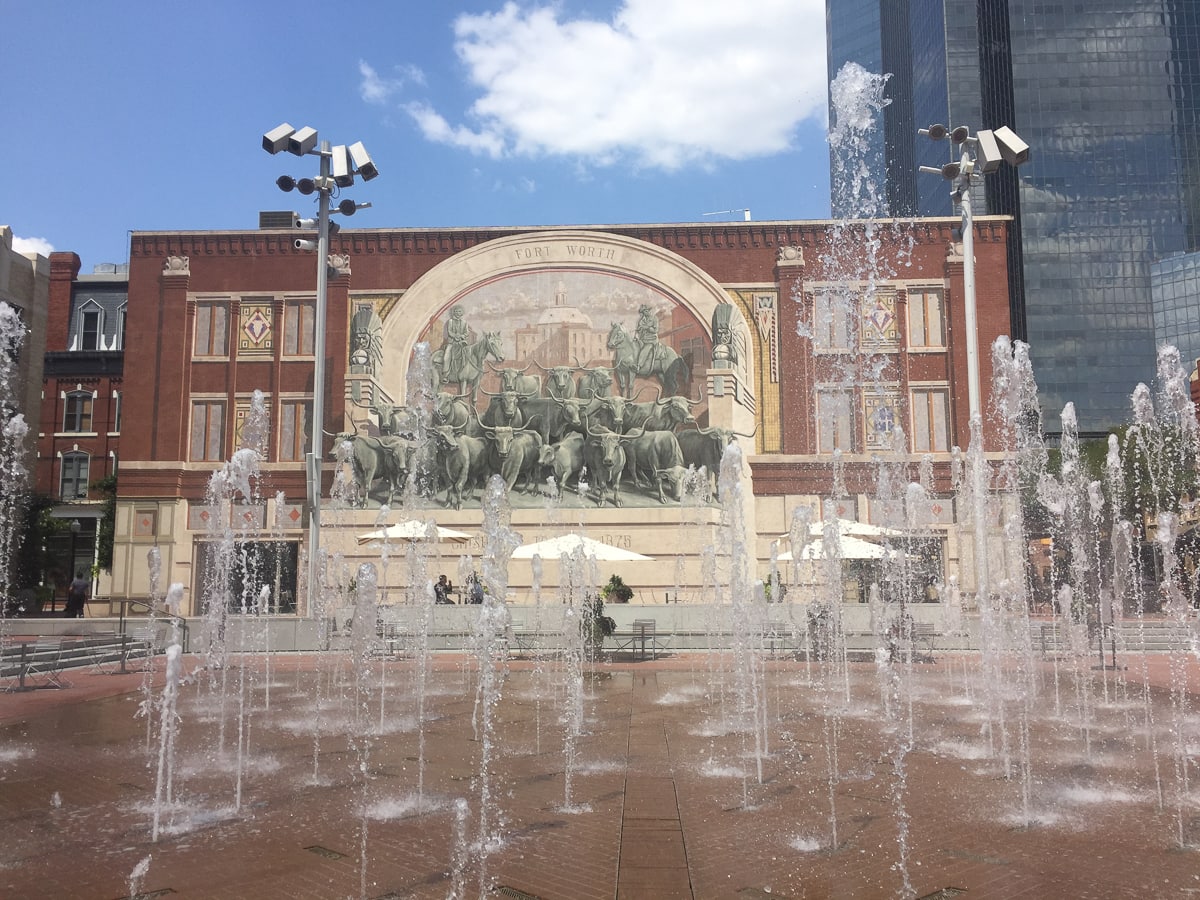 2. The Tarrant County Courthouse, on the list of U. S. National Register of Historic places, is a pink Texas granite building in the Renaissance Revival style erected in 1894, resembling the Texas State Capitol except for the clock tower. Visit the museum inside to learn more about Fort Worth. 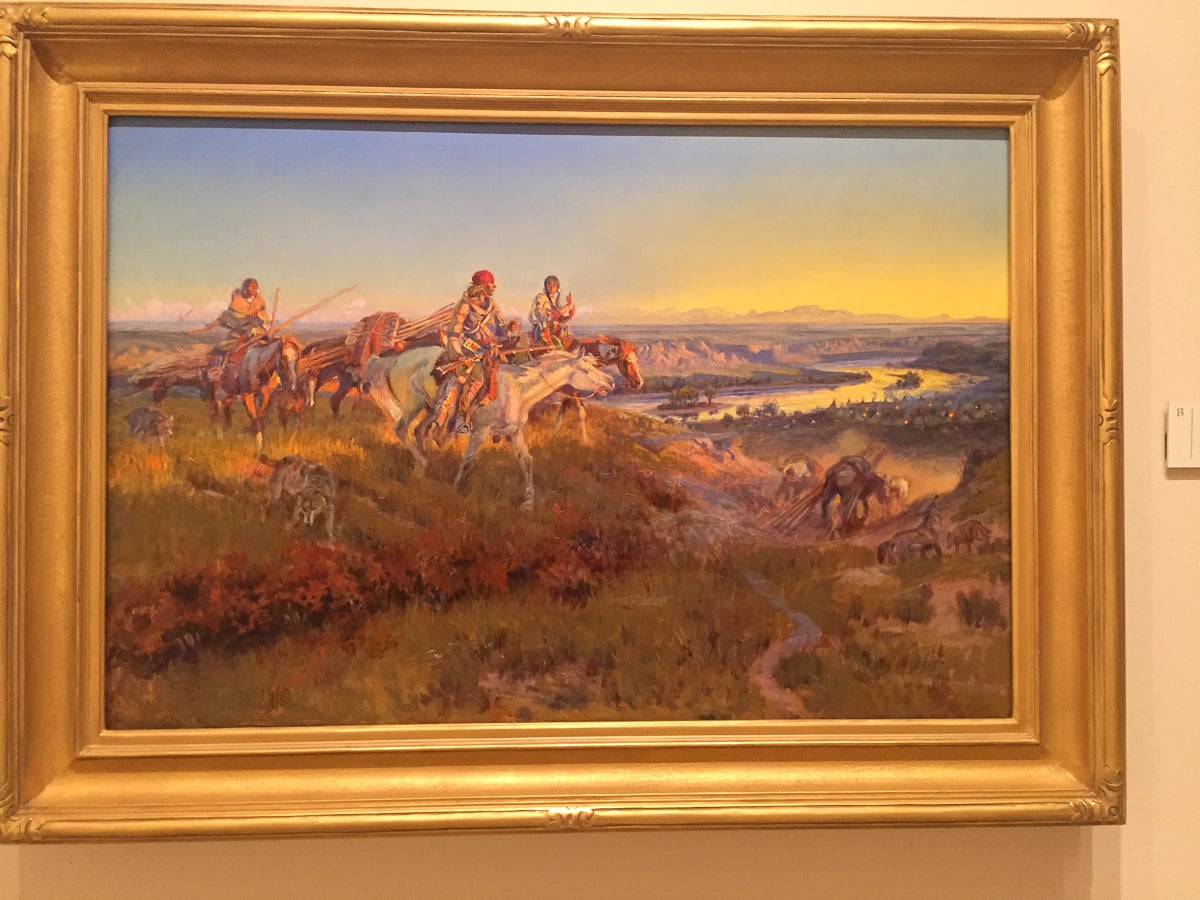 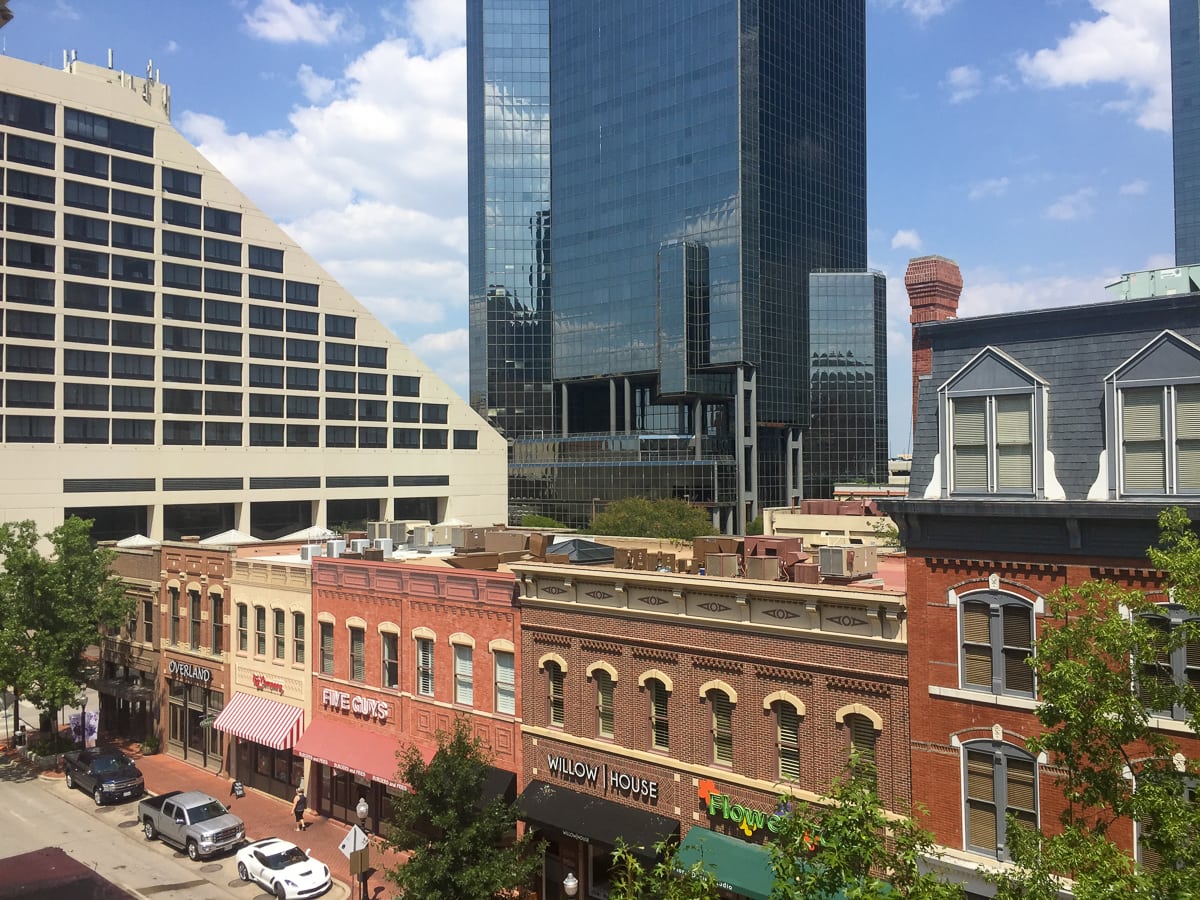 4. Reata at Sundance is named for the majestic ranch in the 1950’s epic movie “Giant” starring James Dean, Rock Hudson, and Elizabeth Taylor. You’ll find legendary Texas cuisines like the Tenderloin Tamales, famous steaks like the Blackened Buffalo Ribeye, exquisite wines and one of the tastiest margaritas anywhere. 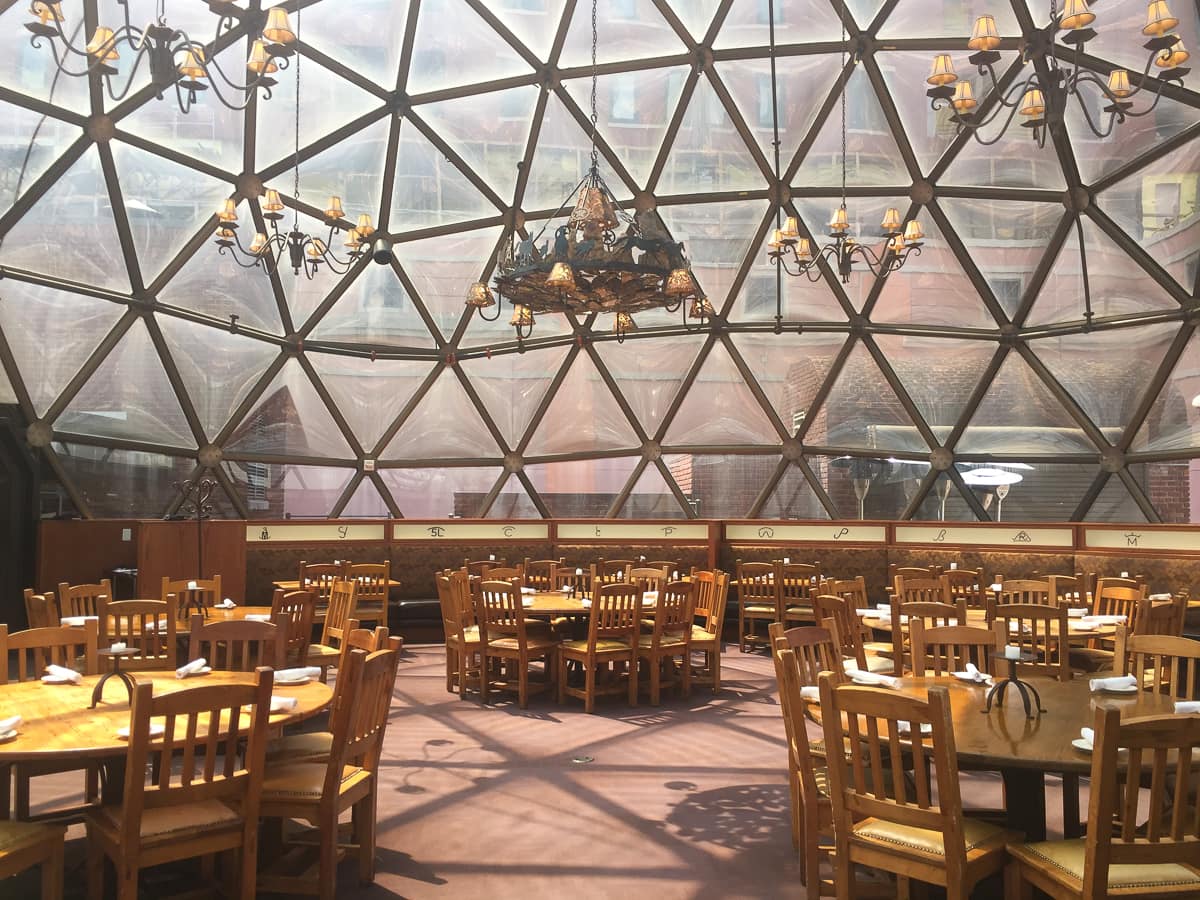 Sip a Fort Worth Old Fashioned made with Firestone & Robertson TX Whiskey or a classic margarita before dinner on the rooftop bar. 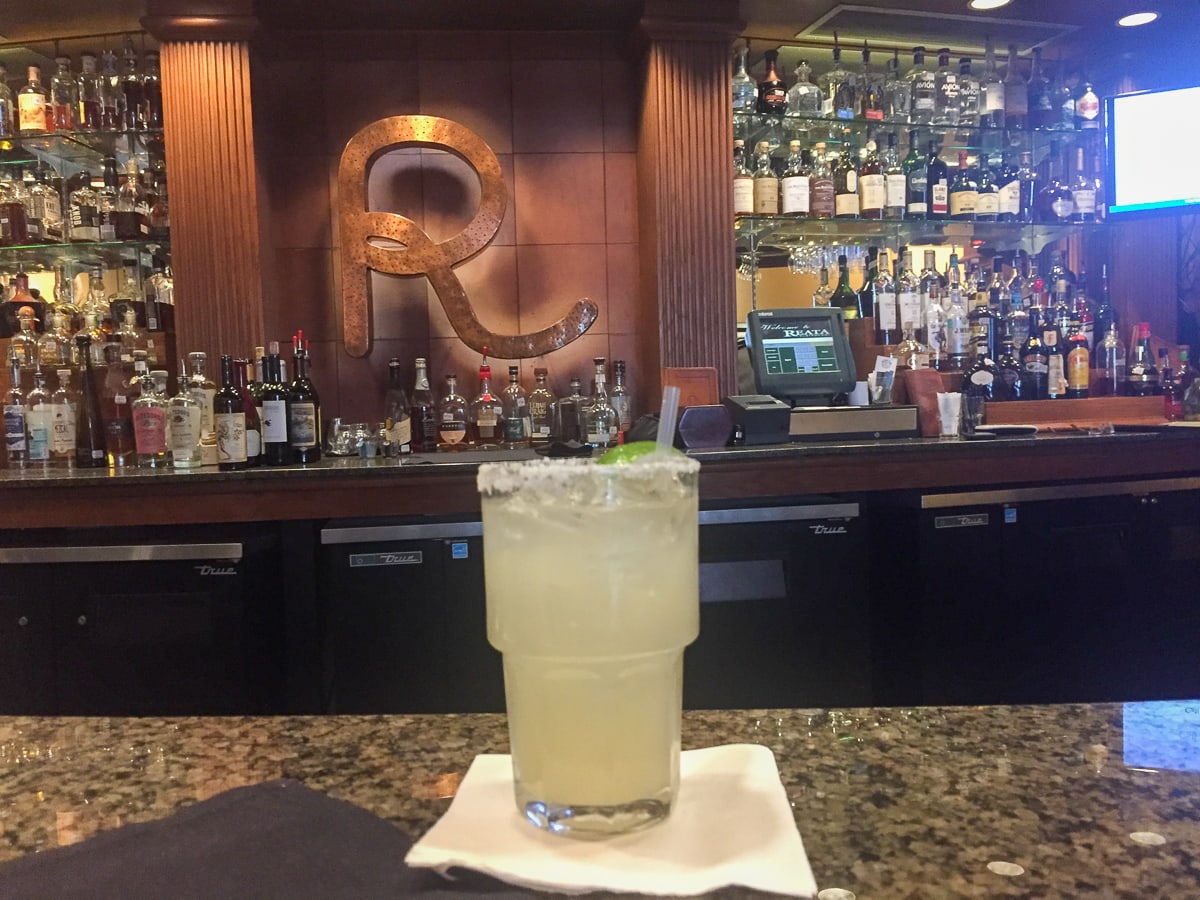 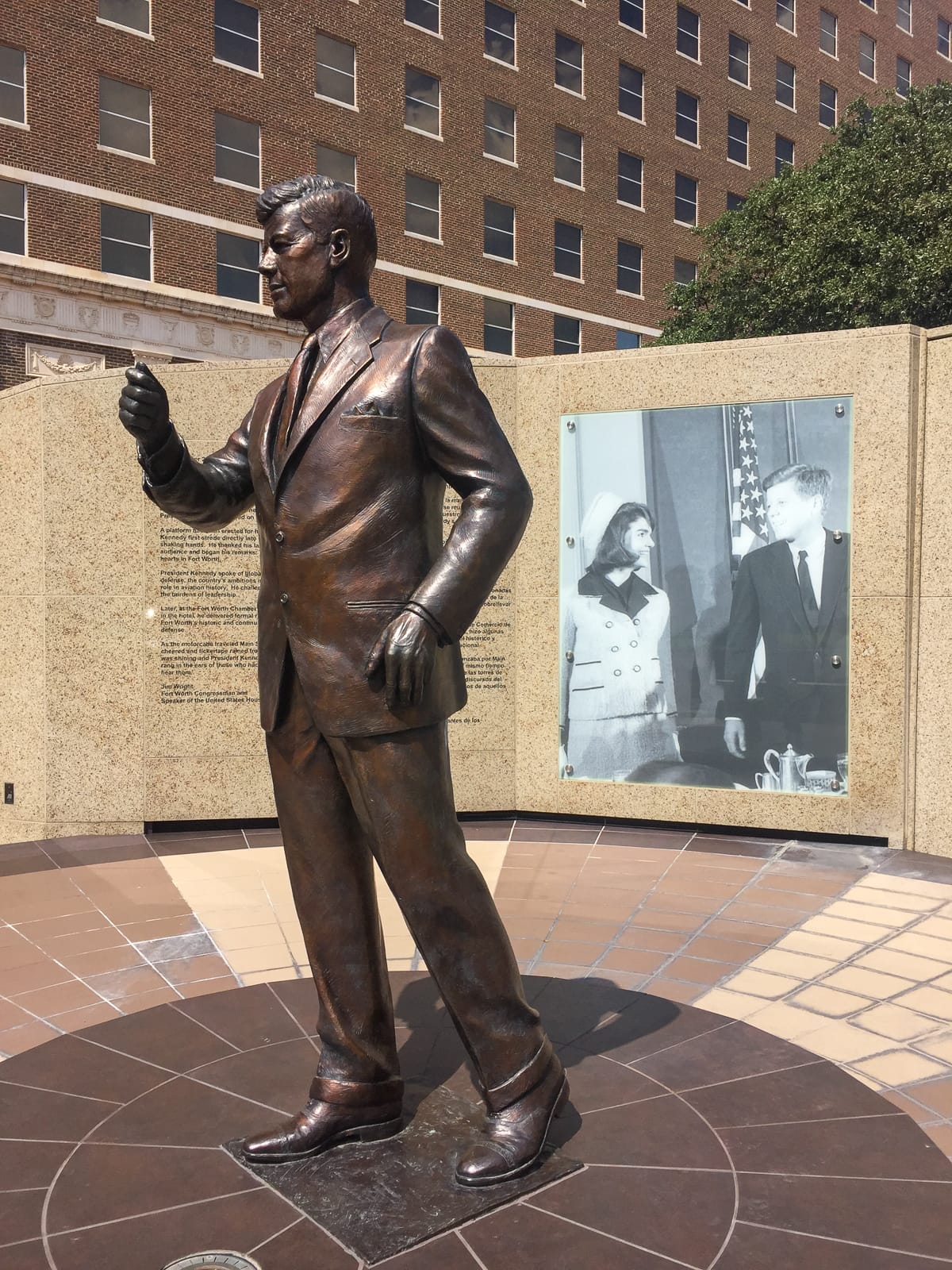 6. The Hilton Hotel, a historic landmark hotel in downtown is the scene of the 35th President John F. Kennedy’s final address on the morning of November 22, 1963. Historic photographs line the hallways and are featured in the rooms of this ‘place in history’ hotel. 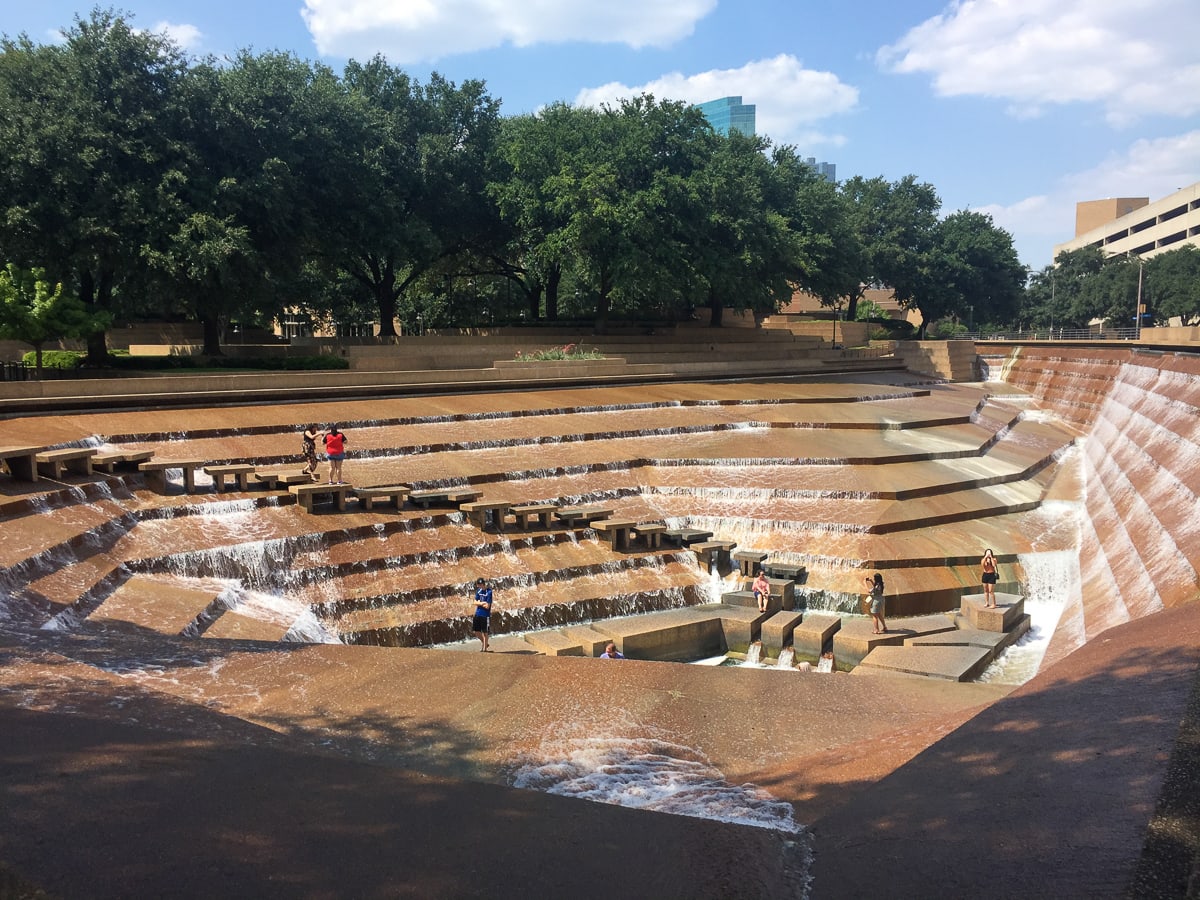 7. The Fort Worth Water Gardens, located in the south end of downtown near the Convention Center, offers a 4.3 acre architectural and engineering marvel with refreshing water features including steps leading down to a water fountain.

8. TCU Texas Christian University, a compelling academic community, located three miles from downtown, is a private Christian University with 10,500 in enrollment. TCU is home of the Big 12 Conference Horned Frogs (named after the state reptile) with football Coach Gary Patterson. 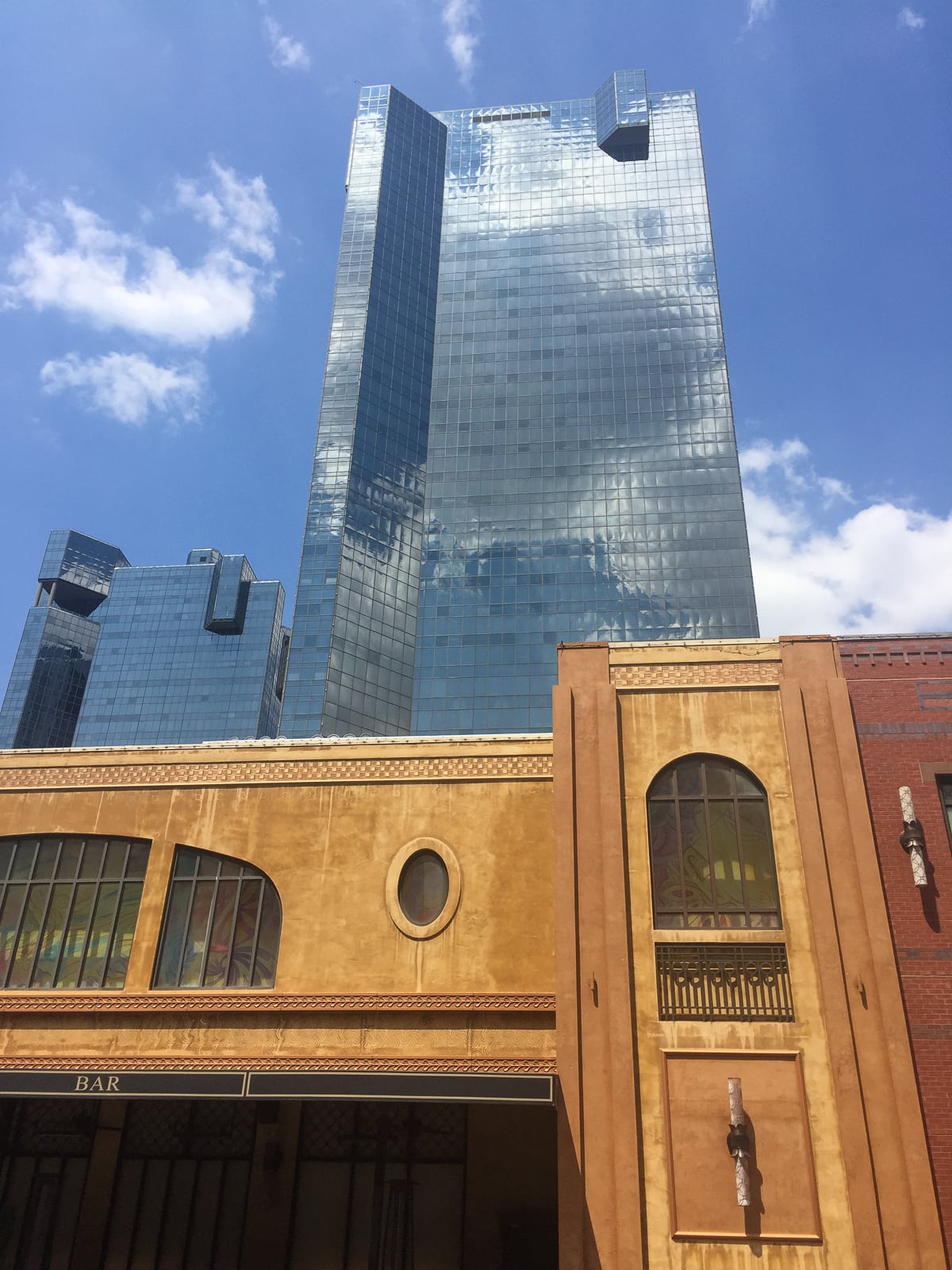 9. Magnolia Avenue, a funky-chic neighborhood in a pocket just south of downtown near a group of hospitals, is a mix of modern restaurants, shops, and bars in an old neighborhood. Try Kent & Co Wines, 200 wines by the glass or dinner at Ellerbe Fine Foods, refined yet laid-back. 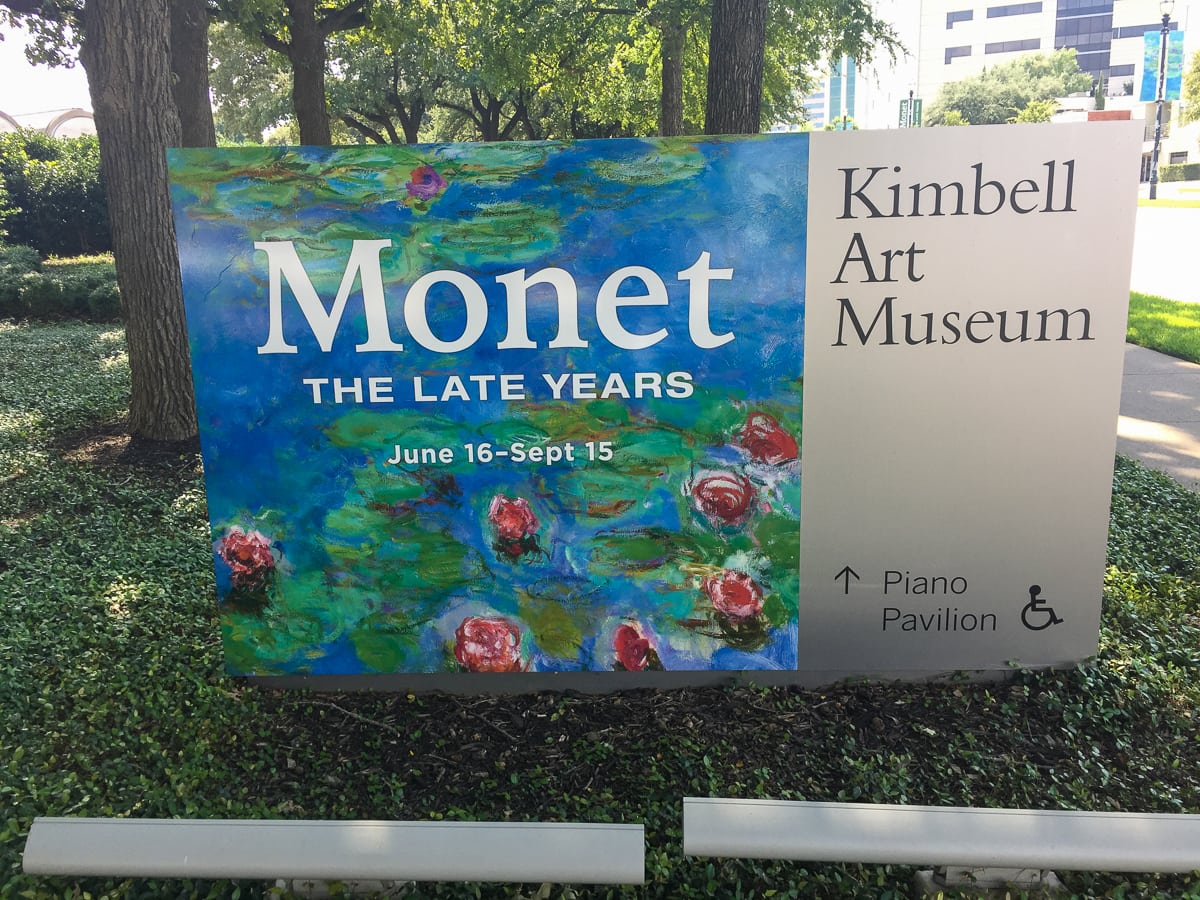 11. The Kimbell Art Museum, in the museum district west of downtown, opened October 4, 1972, with 260 paintings and 86 other works of art owned by Kay and Velma Kimbell. The museum continues to enrich the collection with acquisitions by Michelangelo, Poussin, Mayan ceramics and special exhibitions like Monet, The Late Years and Renoir, The Body, The Senses. 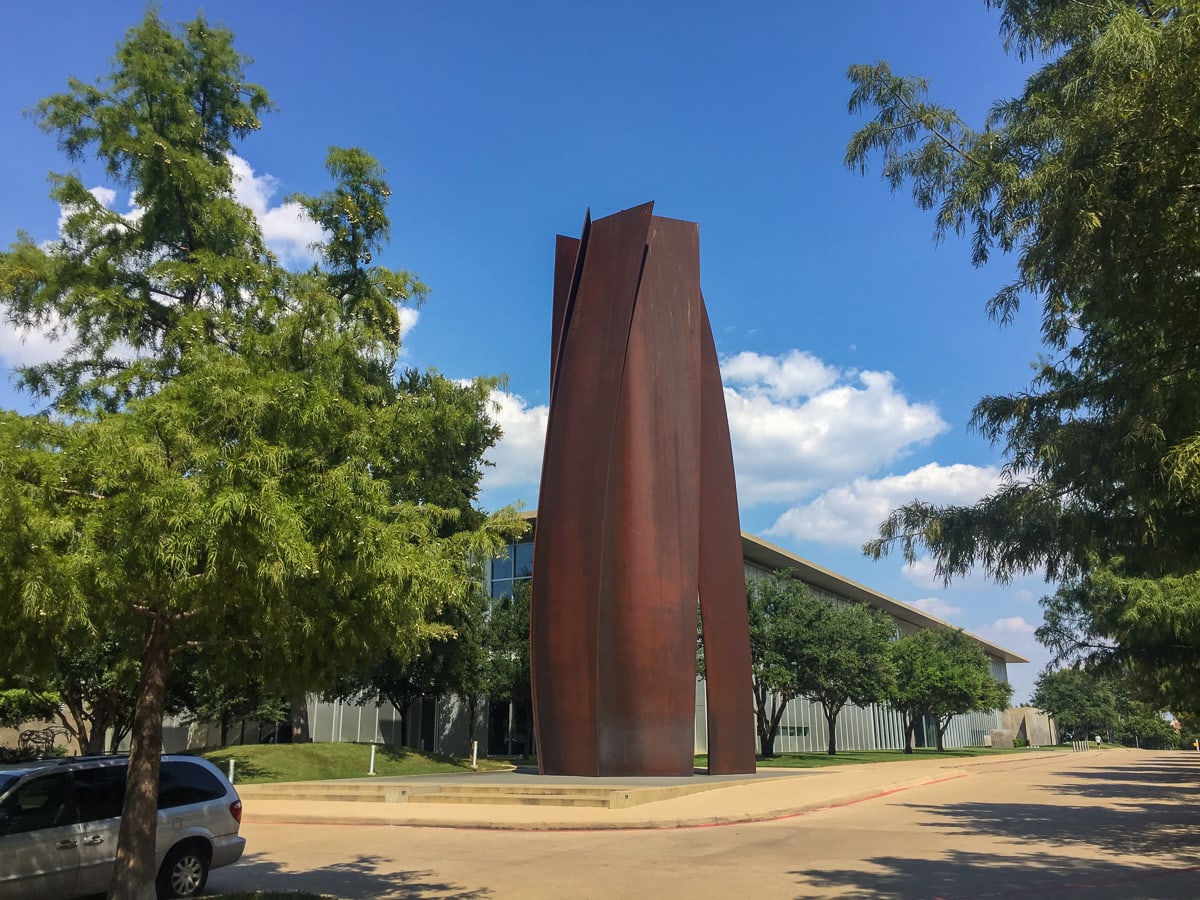 13. The Fort Worth Zoo, the 4th top zoo in the nation, features “A Wilder Vision’ a $100 million master plan to completely redesign the zoo with renovated and re-imagined habitats.

14. The Colonial Country Club is home to the PGA Charles Schwab Challenge scheduled every mid-May, the longest-running host of a PGA Tour event played on its original site. 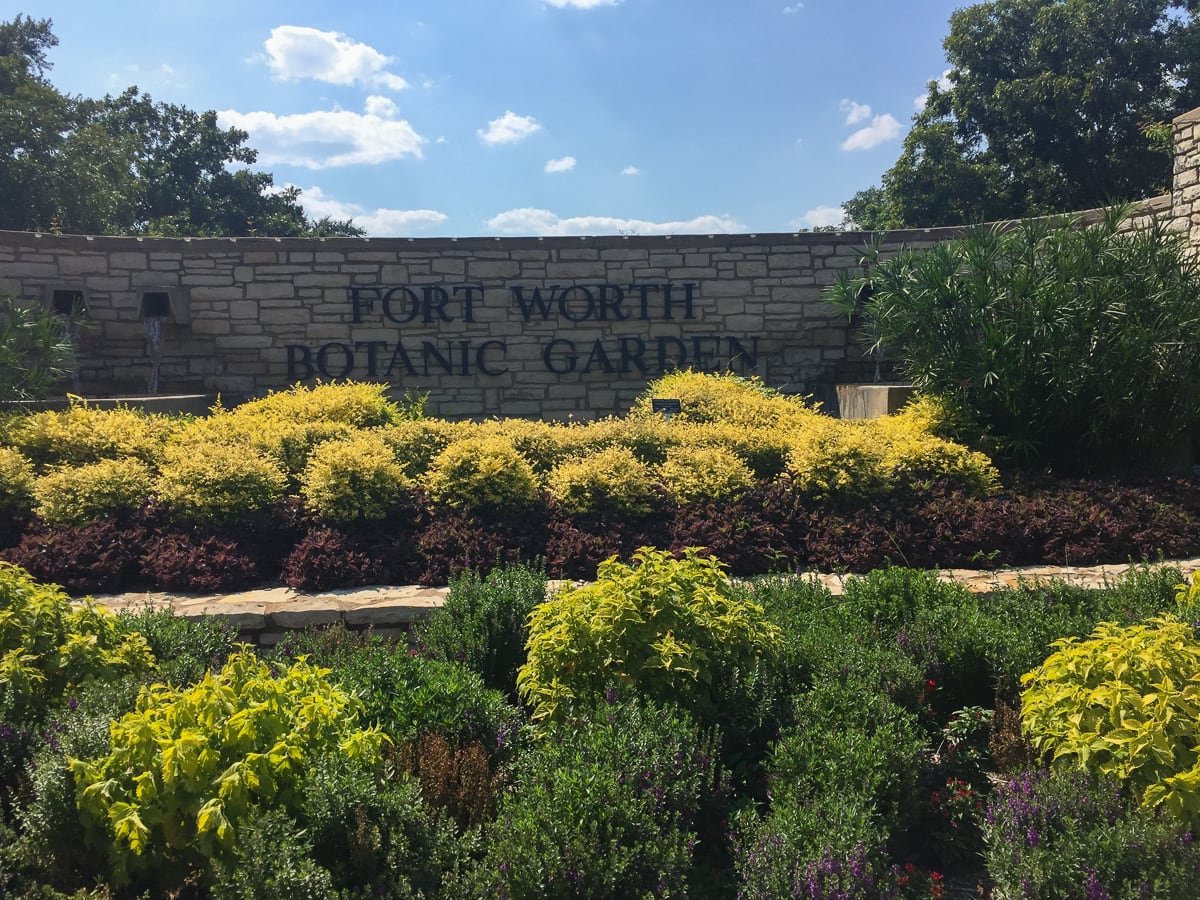 15. The Botanic Gardens, established in 1934, is the oldest botanic garden in Texas, with twenty-one specialty gardens including the Japanese Garden, the Rose Garden, and the BRIT Botanical Research Institute of Texas. 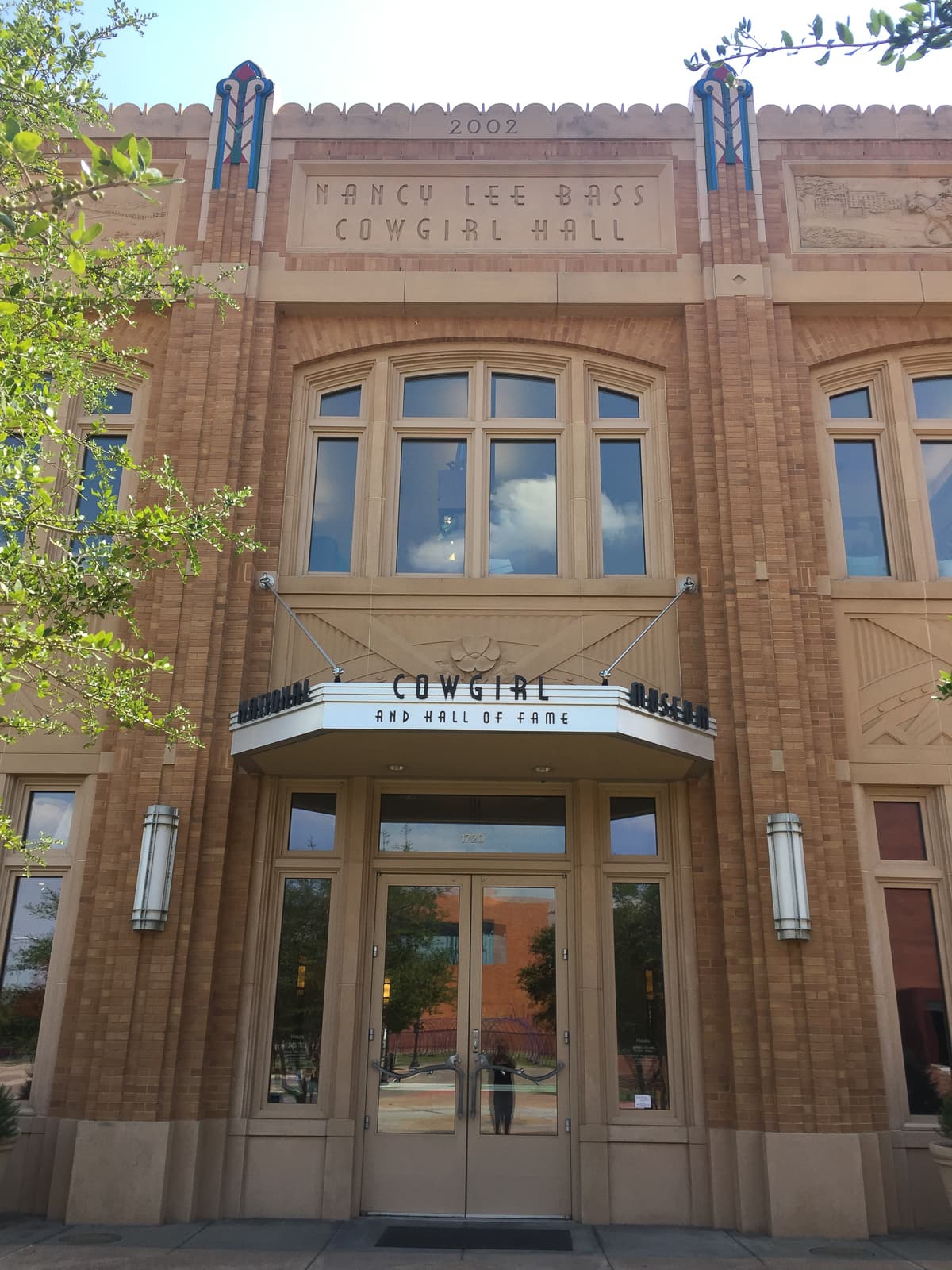 16. The National Cowgirl Museum and Hall of Fame, established in 1975, is dedicated to honoring women of the American West. 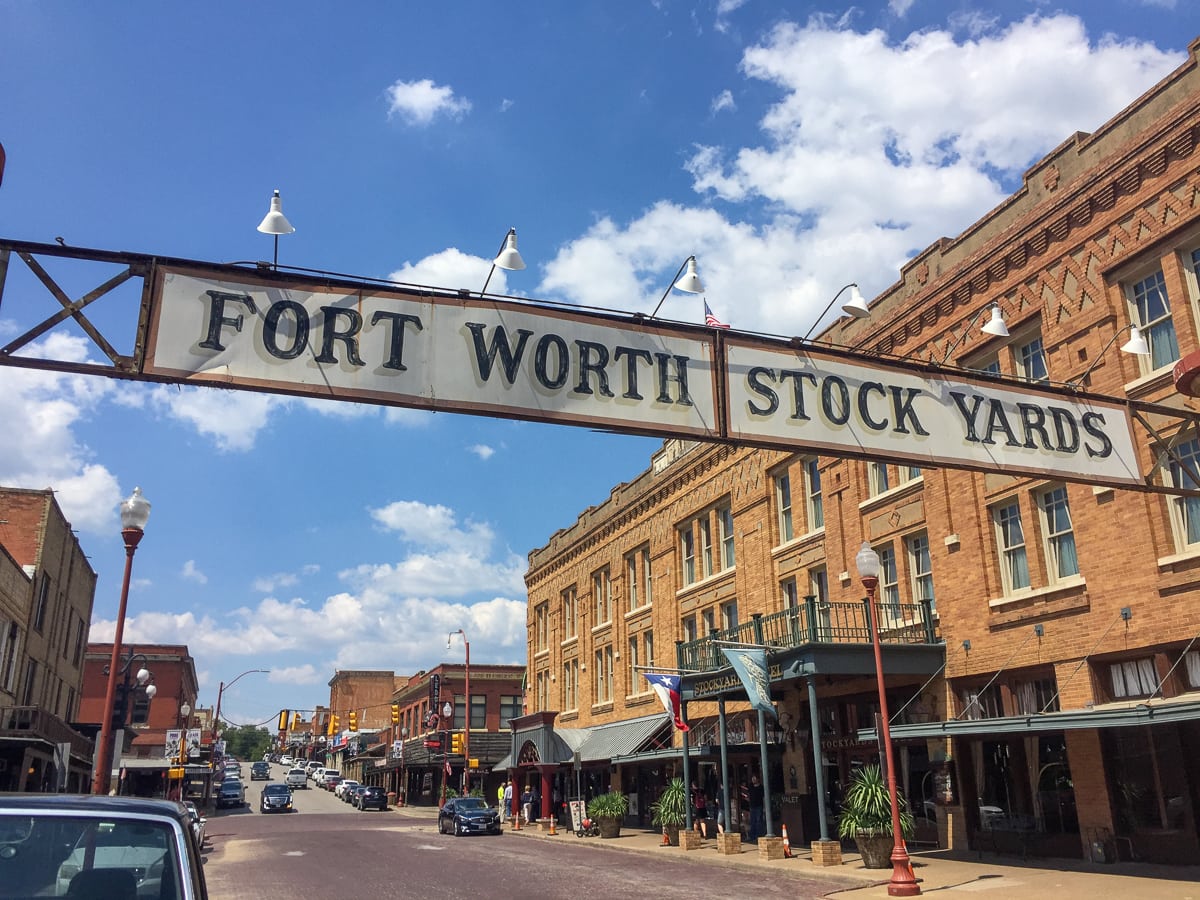 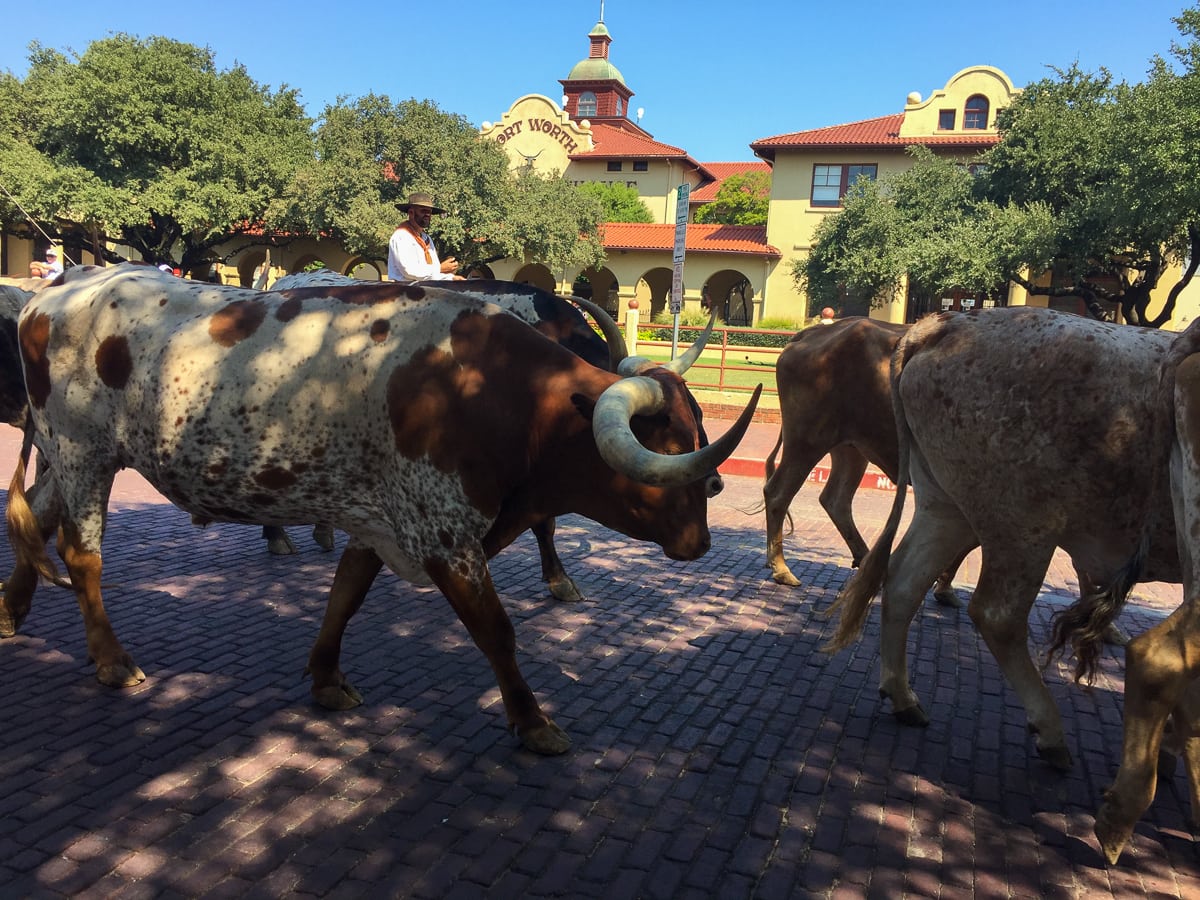 18. The Fort Worth Herd Longhorn Cattle Drive happens daily at 11:30 am and 4:00 pm on Exchange Avenue complete with real cowboys and drovers. 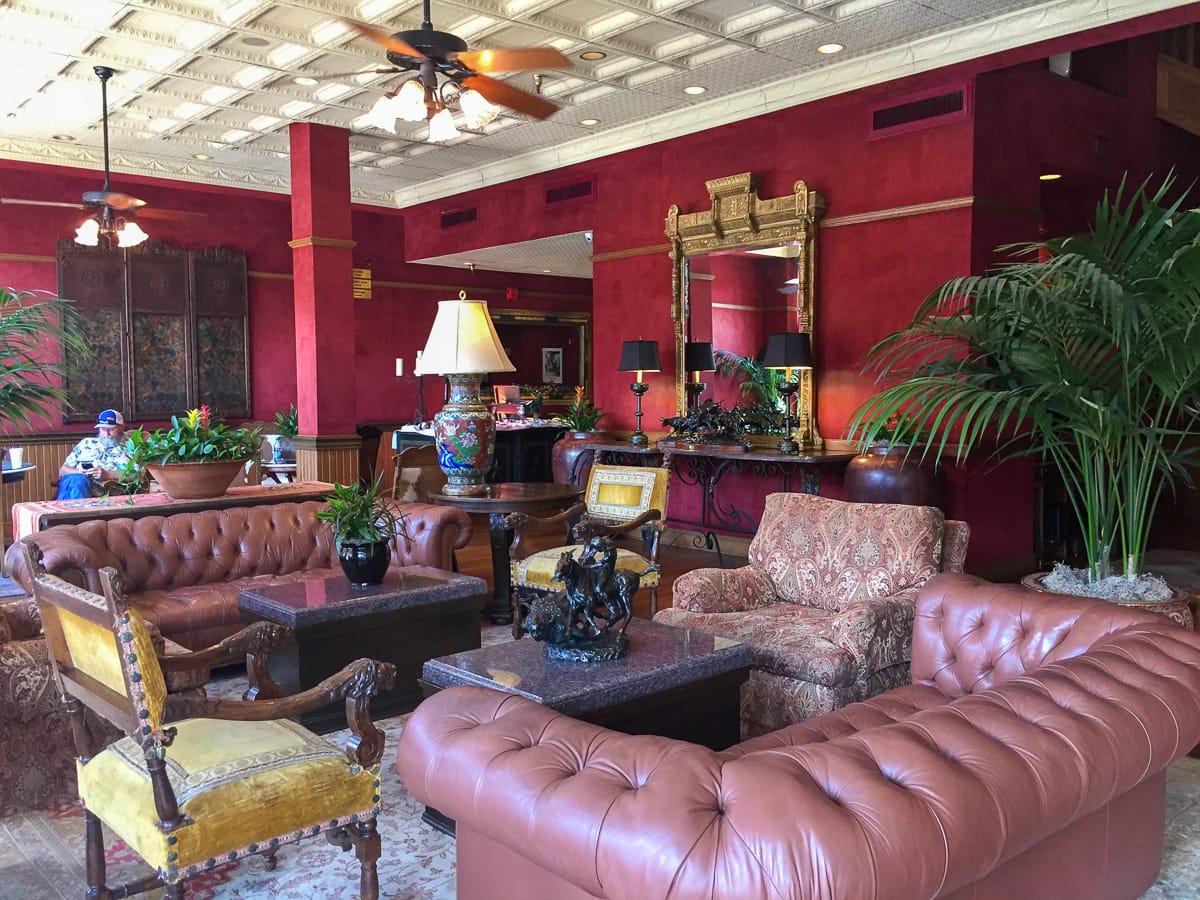 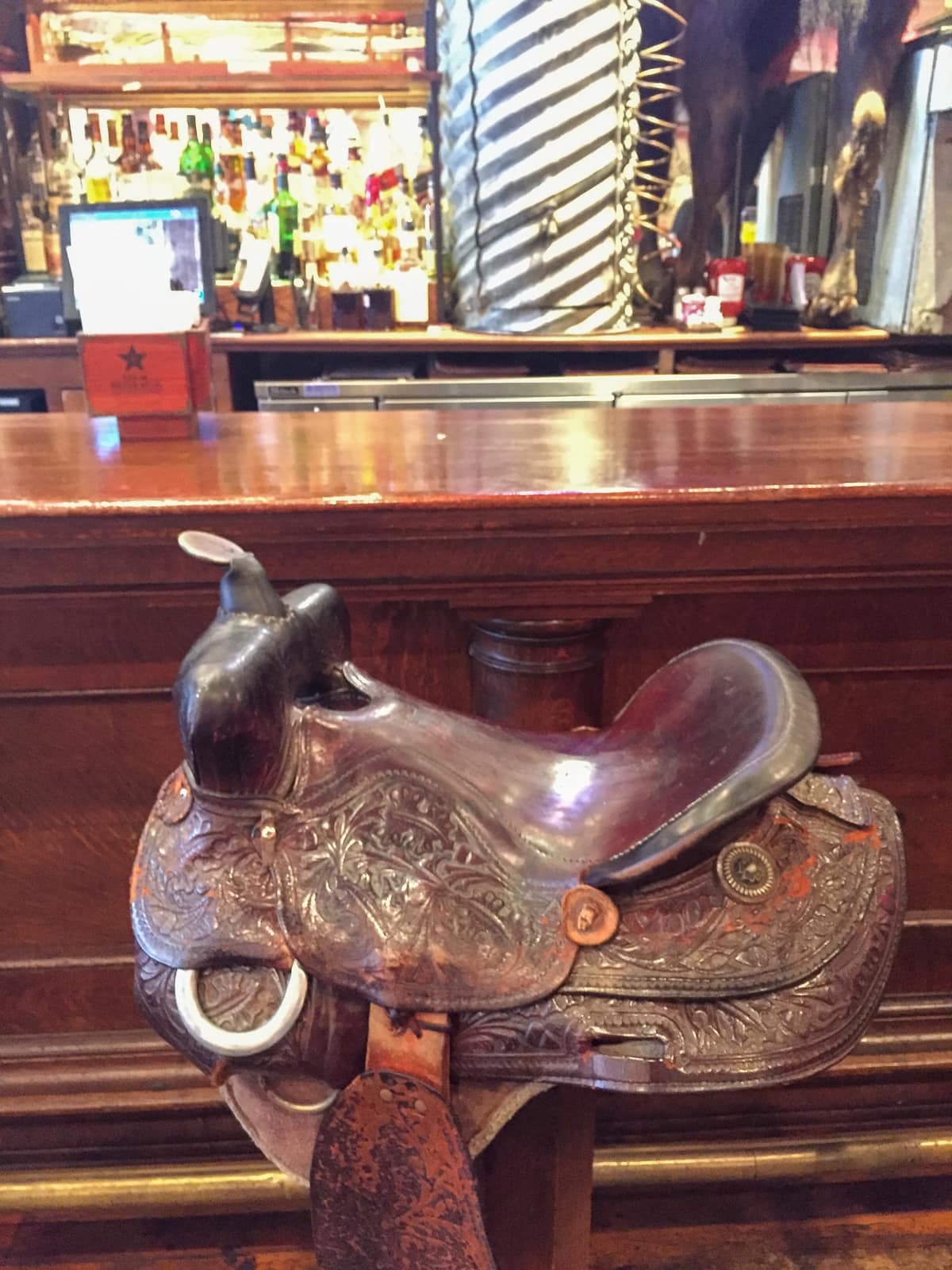 19. The Stockyards Legendary Hotel, with western-themed rooms in a historic 1907 boutique hotel, was frequented by Bonnie and Clyde. 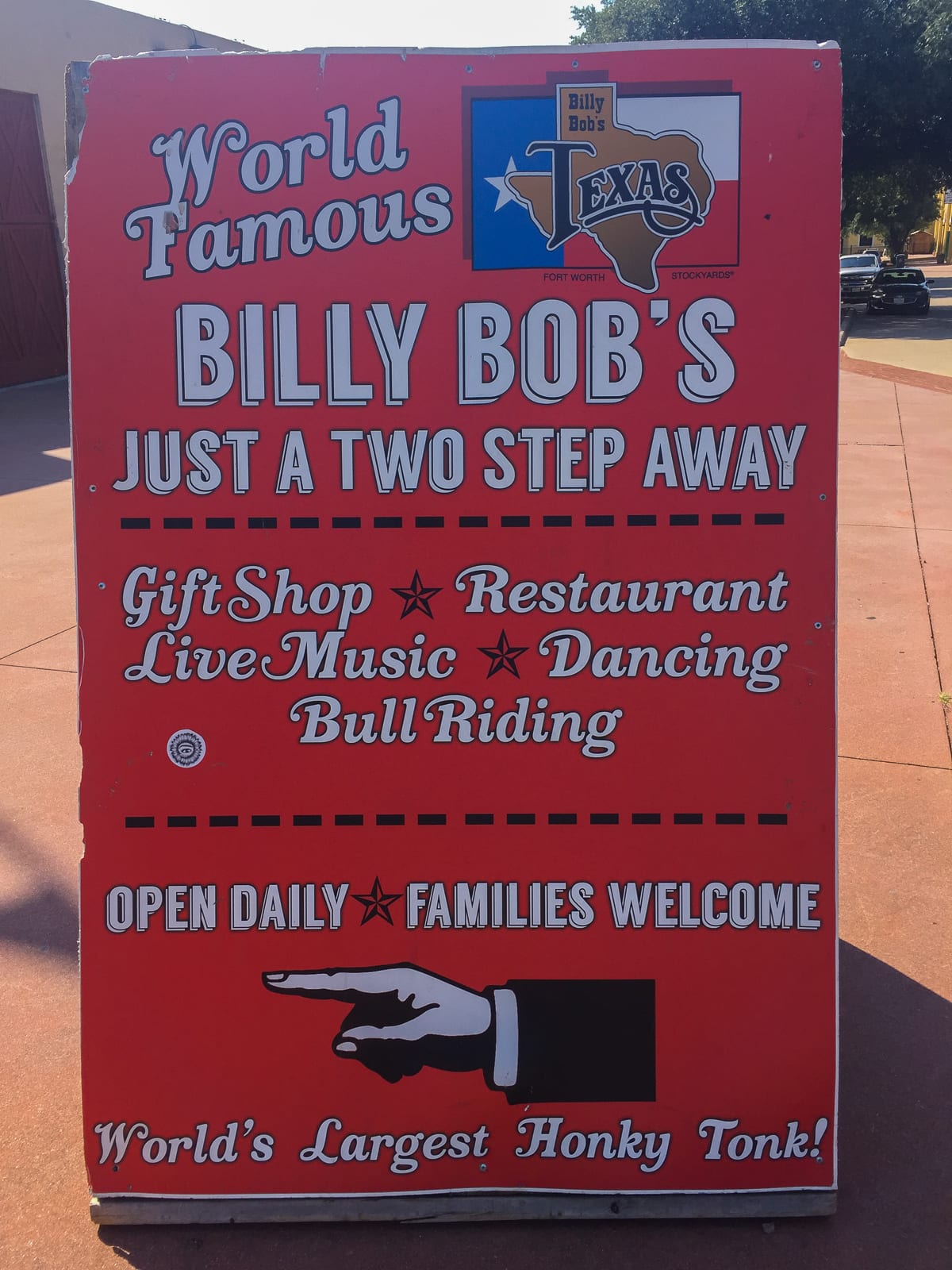 21. Check out the twenty-plus Breweries in the Fort Worth area, each with a unique craft beer experience. And they’re celebrating the new ‘beer to go’ law effective September 1st.

22. Firestone & Robertson Distillery, constructed on the grounds of an old golf course, touted their Texas Whiskey as the award-winning “Best American Craft Whiskey.” Every cork holds a circle of boot leather by Justin, Tony Lama and more.

24. Bike Fort Worth, a comprehensive plan for promoting safe bicycling and backed by our mayor Betsy Price, established the downtown loop, Thunder Road and additional bike lanes across Fort Worth. 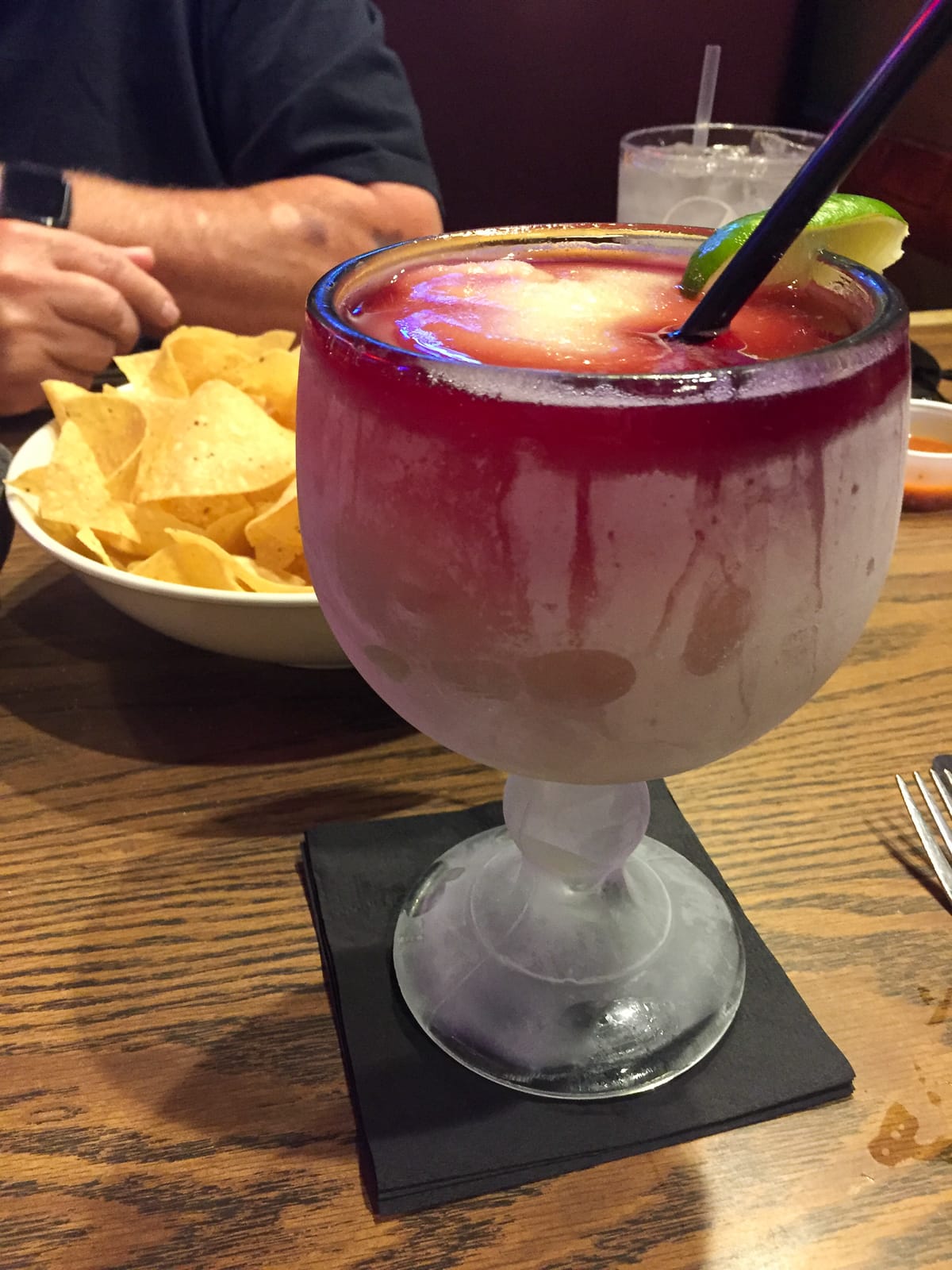 25. Margarita, the official Fort Worth cocktail, comes on the rocks with a salt rim, or beer-arita, frozen with an 8 oz Dos Equis or Corona turned upside down in the drink, frozen margarita swirled with sangria, plus flavors of strawberry, mango, cucumber, peach, prickly pear and more. 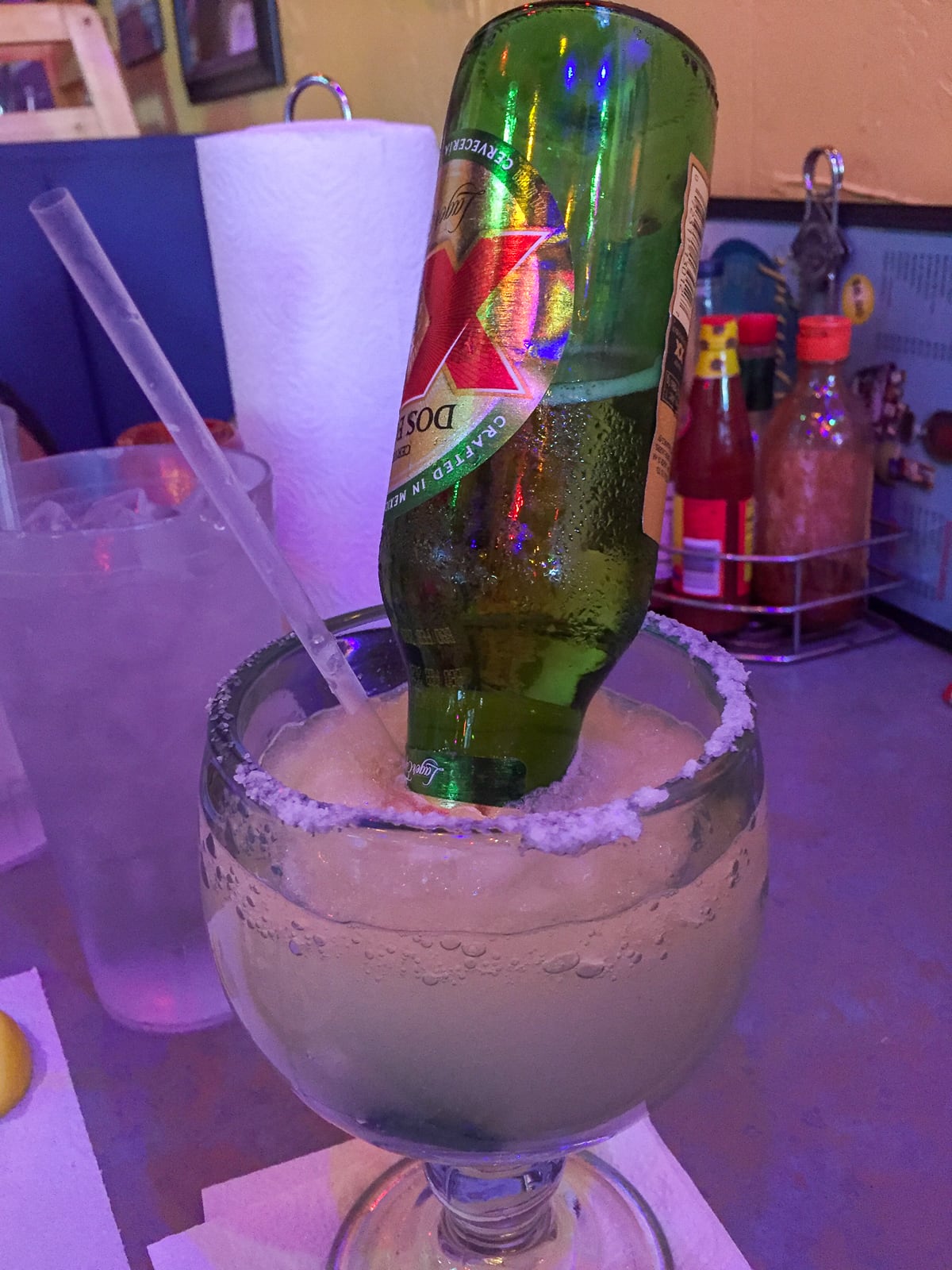 26. See exciting rodeo action, bull’s night out, the midway, livestock and horse shows at the Fort Worth Livestock Show and Rodeo held three weeks every January to mid-February at the Will Rogers Coliseum and debuting at the New Dickies Arena in 2020.

27. ESPN College GameDay Kickoff at Sundance Square is a live broadcast in the ‘living room’ of downtown over Labor Day Weekend, a great partnership embraced by the community.

28. Just west of downtown, Neiman Marcus and the Shops at Clear Fork are open for upscale shopping, restaurants and department stores. 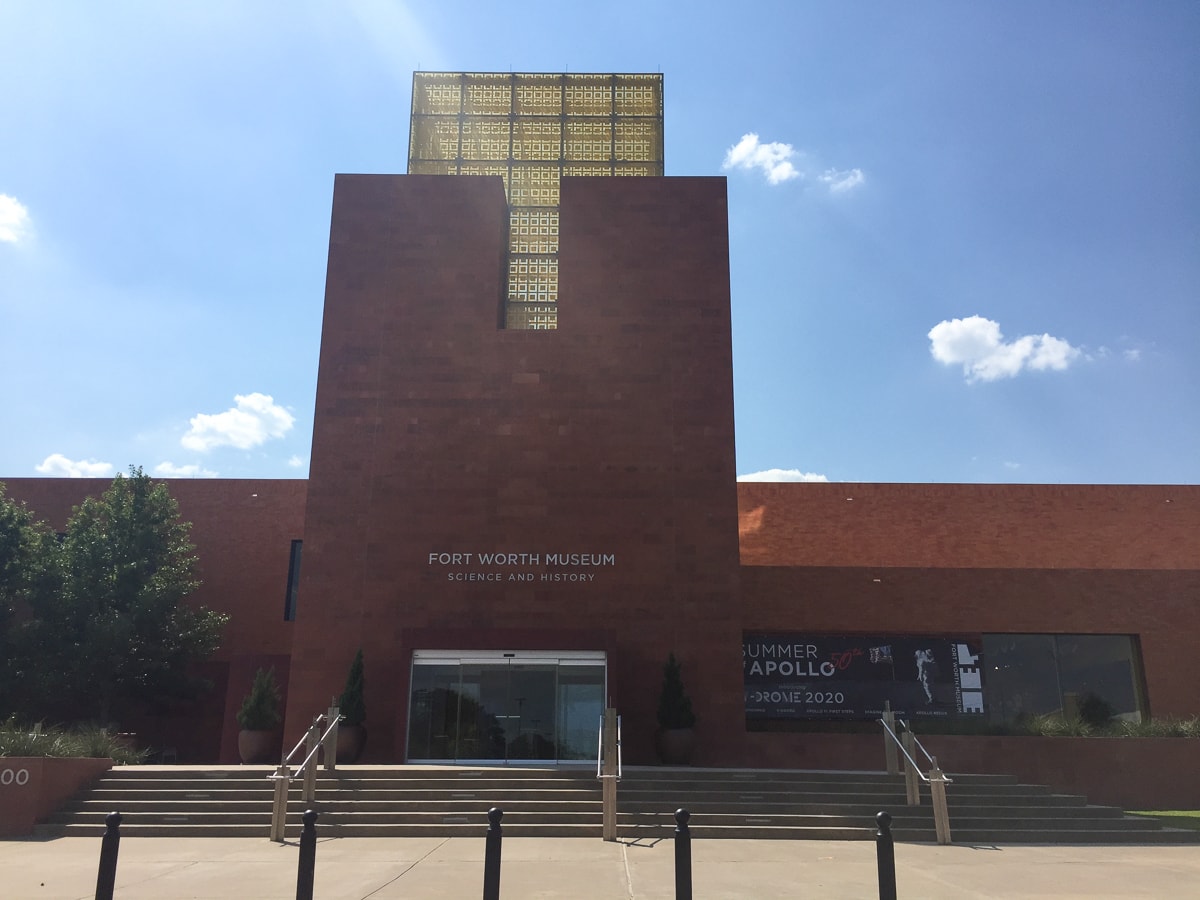 30. AT&T Cowboy’s Stadium in nearby Arlington is home to The Dallas Cowboys and select college football games, rodeos, supercross events and more.

31. The new Globe Life Field, the domed Texas Rangers ballpark is scheduled to open the season March 2020 in nearby Arlington.

33. Mexican food is plentiful in Fort Worth, but one restaurant stands out. With famous enchiladas, fajitas, and guacamole, the original is Joe T. Garcia’s, family-owned since 1935 and serving over 1,000 hungry patrons a day. Patio seating with a margarita is a must during the spring and fall. 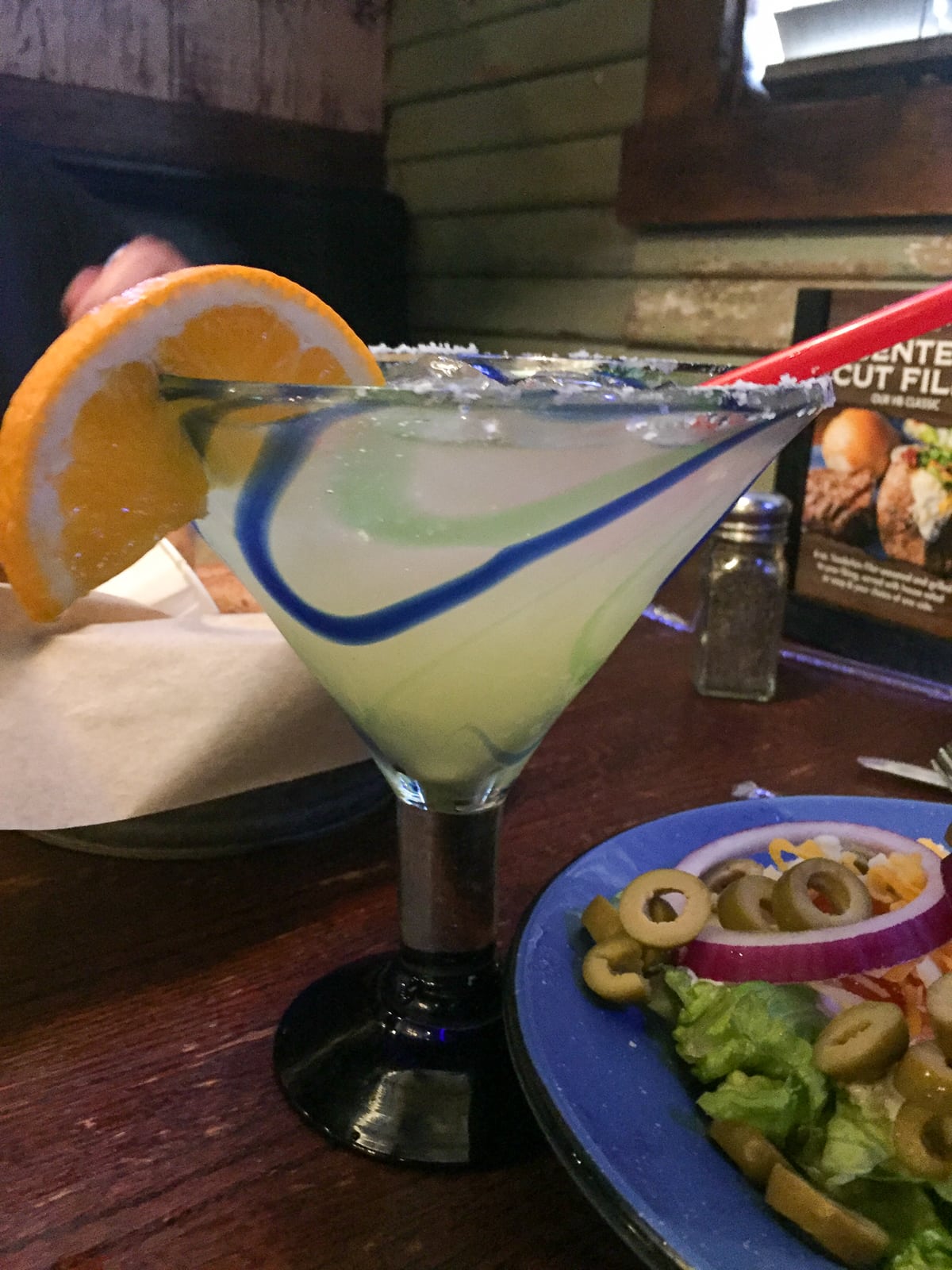 34. The New Sinclair, Autograph Collection Marriott Hotel downtown features high-tech innovations in its 164 guest rooms and a 2-story penthouse suite with Kohler digital showers, LG wallpaper TVs, and Savvy Electric mirrors. Feast on steaks and seafood at the Wicked Butcher and indulge in cocktails and small plates at the 17th Floor Rooftop Bar.

35. The Downtown Fort Worth Inc, Main Table, held annually in September, spans four blocks, right down the middle of Main Street and features delectable steak dinners from five of downtown’s premier restaurants, opening with champagne and hors d’oeuvres in General Worth Square.

36. Thistle Hill, also known as the Wharton-Scott House on Pennsylvania Ave just south of downtown is a historic mansion built in 1904 by a Texas Cattle Baron. 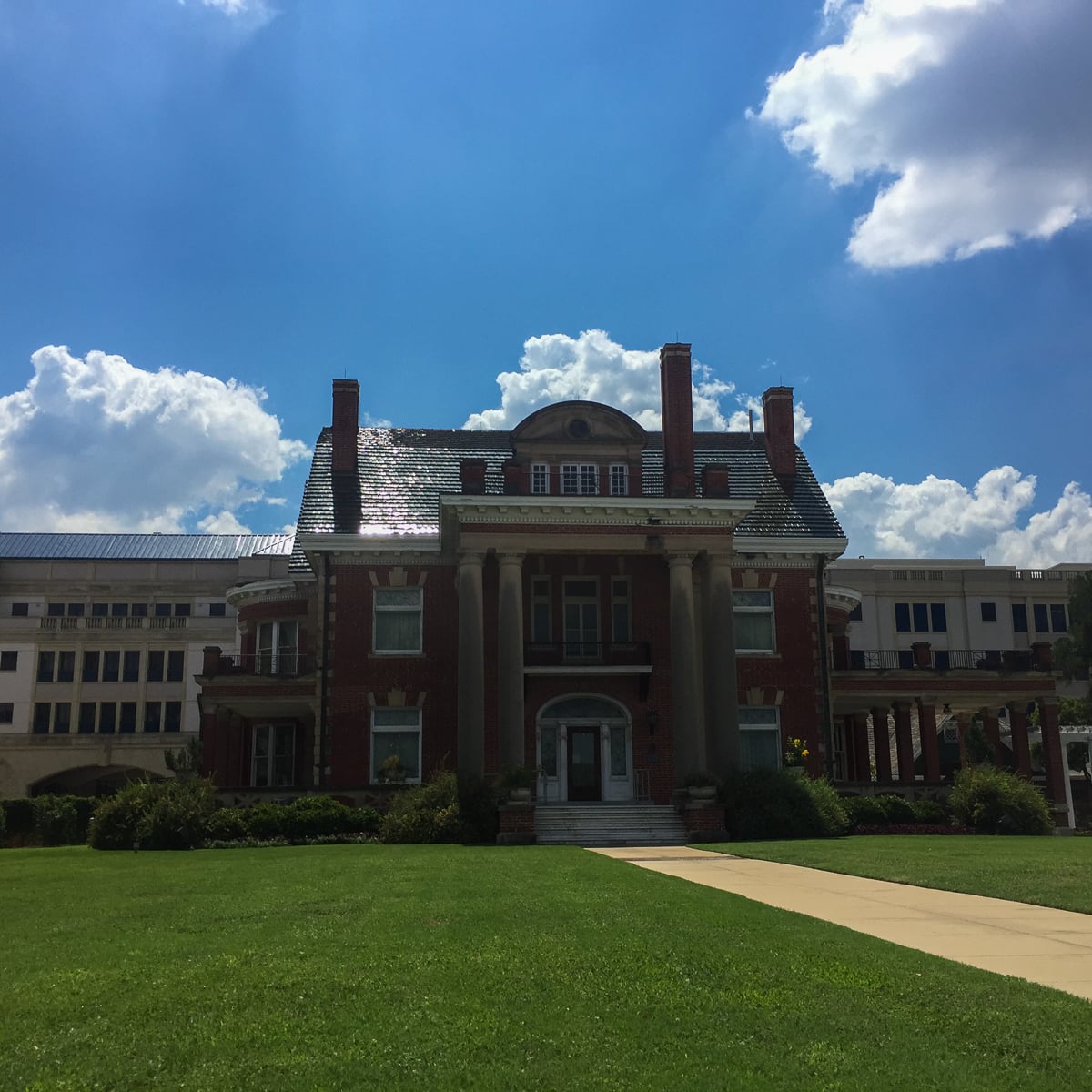 38. Bet a quinella at Lone Star Park, a Class I thoroughbred and quarter horse racetrack with seasonal live and simulcast horse racing 7 days a week just east of Fort Worth in Grand Prairie.

39. A perfect wedding and reception venue, the Fort Worth Masonic Temple, home to four Craft Lodges and several Masonic appendant bodies and organizations in Tarrant County was built just west of downtown in 1932.

40. TexRail – Trinity Metro provides daily passenger rail service in Tarrant County from Fort Worth to DFW Airport with stops along the way.

41. Fort Worth Aviation Museum at Mecham Airport north of downtown tells the history of aviation in North Texas with 26 military aircraft from a 1943 BT-13 trainer to a Blue Angel F/A-18 Hornet.

42. Twenty-three districts and 86 individual properties are listed in the National Register of Historic Places in Tarrant County including the Fort Worth Woman’s Club and the W. T. Waggoner Building downtown. 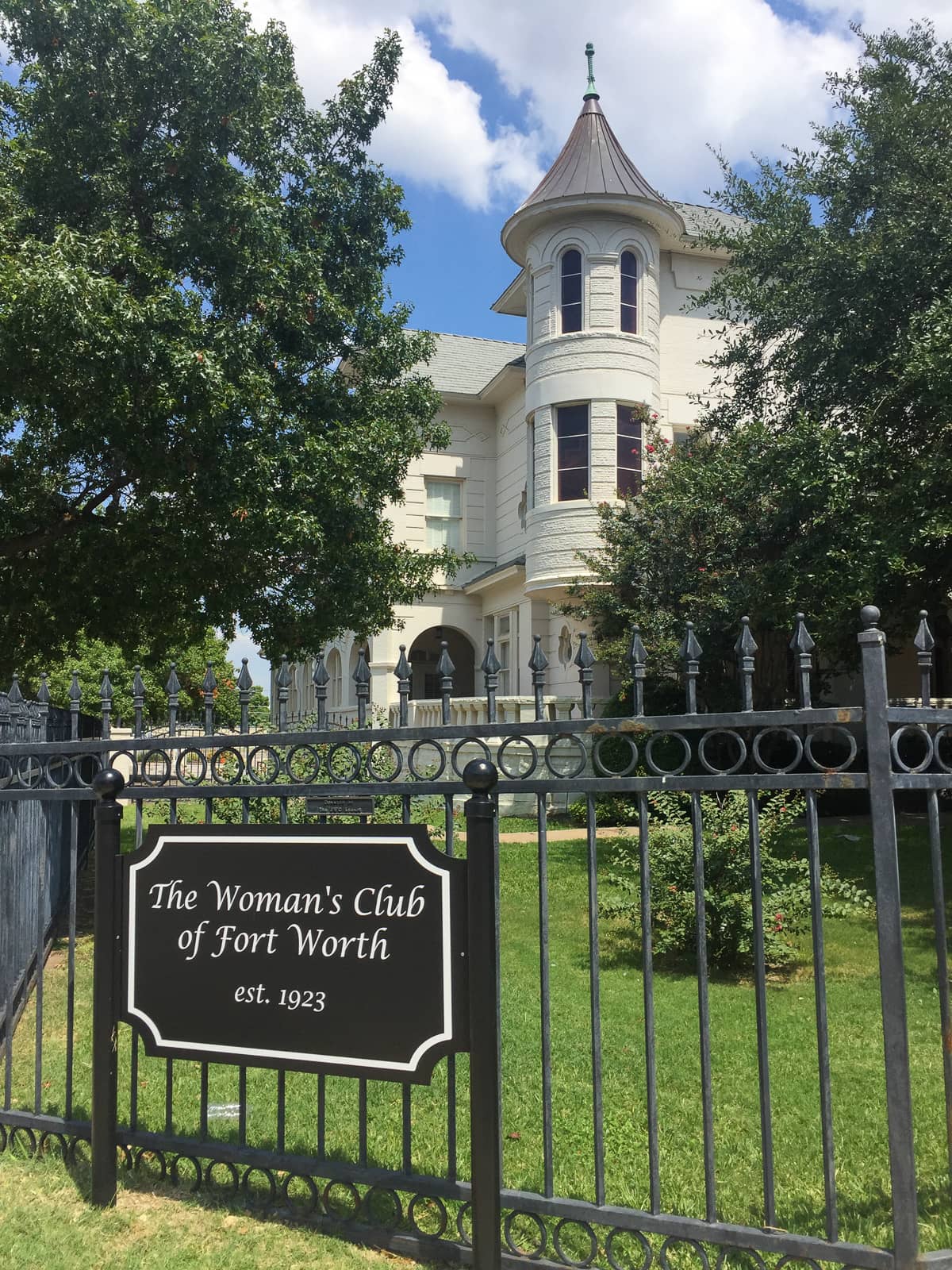 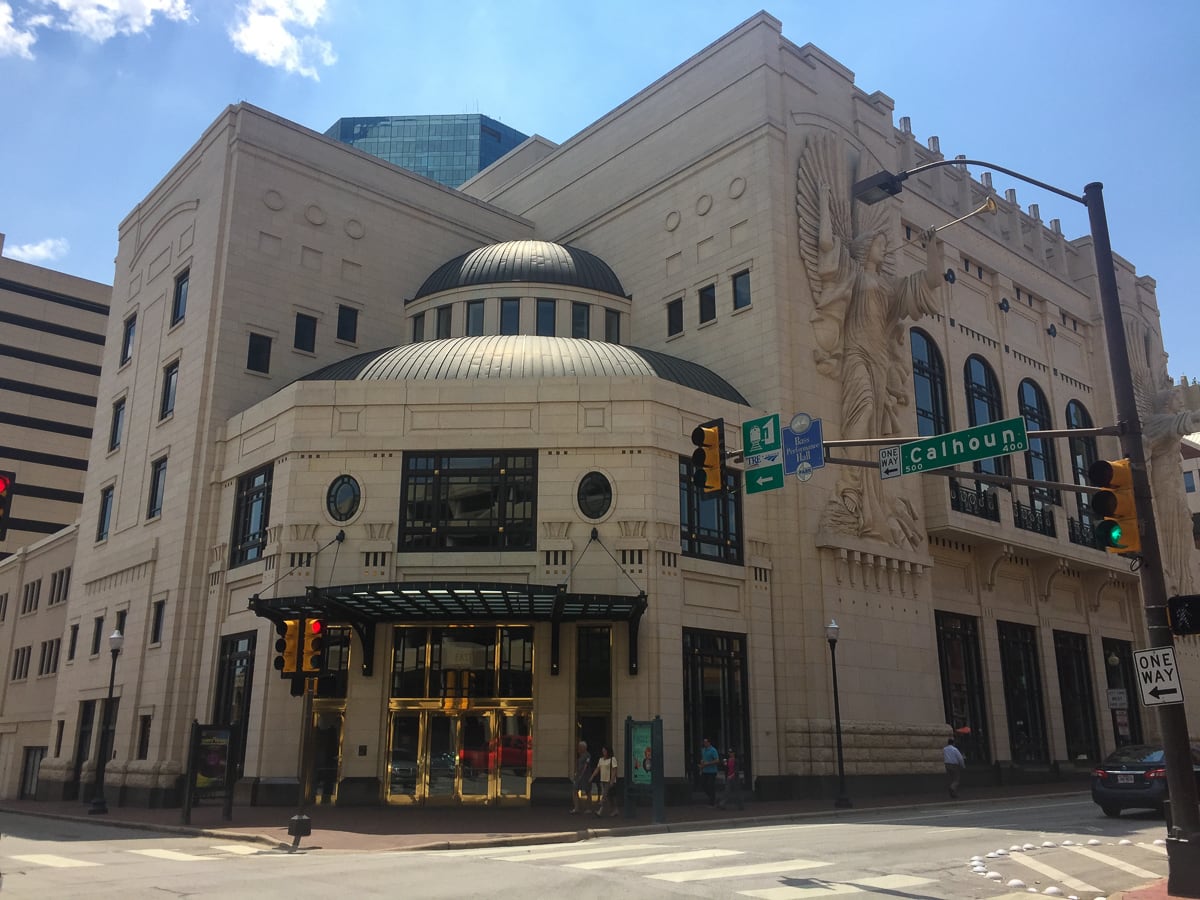 44. Elizabeth Boulevard, the Silk-Stocking Row of the 1920s, named after the wife of its developer John Ryan, was the city’s first Historic District and was added to the National Register in 1979.

45. Lockheed Martin in west Fort Worth builds the F-16 fighting falcon, the F-35 and recently the U. S. Army awarded Lockheed Martin a $347 million contract as part of a multi-year hypersonic weapons development for long-range precision strike missiles.

46. The Bell Fort Worth Alliance Air Show held every October displays the importance of the aviation industry, its products and services and culminates with the Blue Angels Flyover. 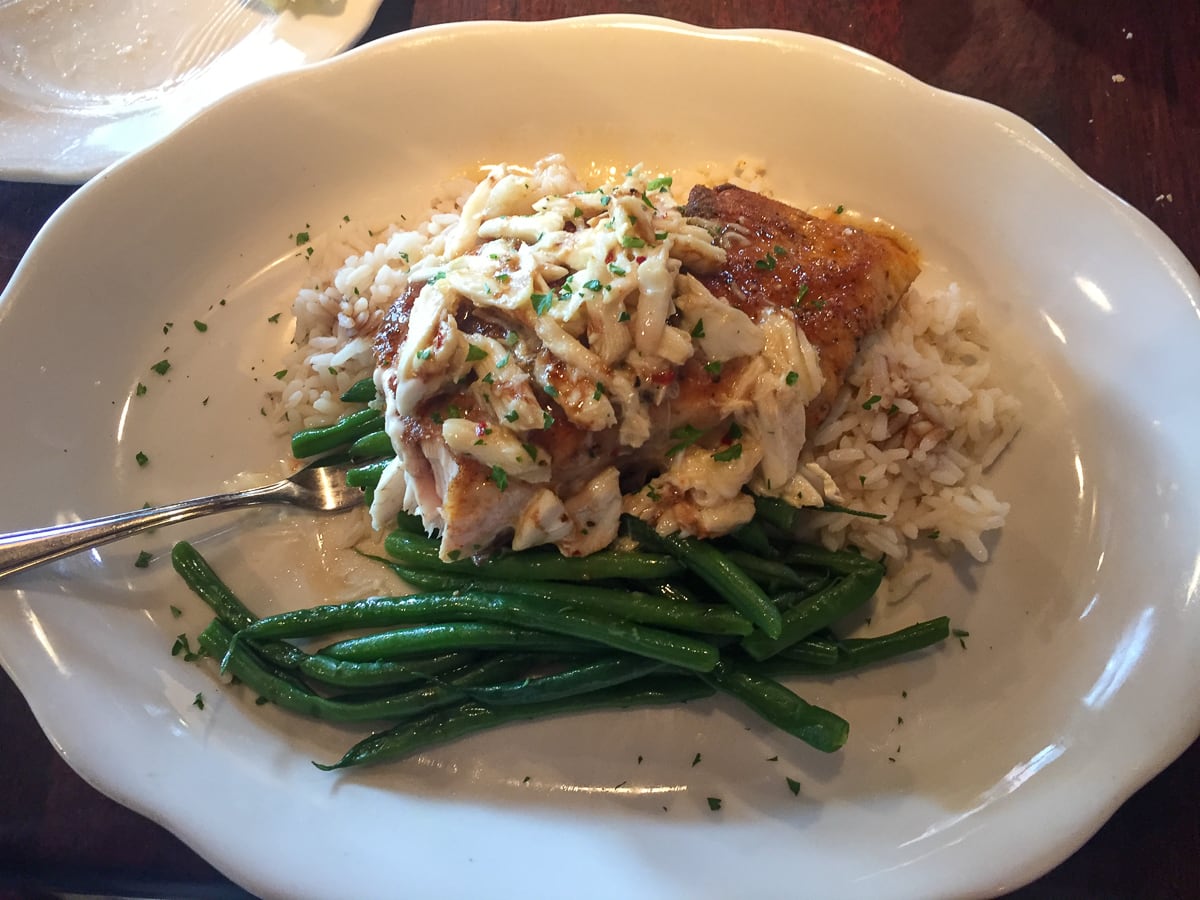 48. Fort Worth Nature Center & Refuge is a 3,000-acre preserve with 20 miles of hiking trails, plus a multitude of birds, alligators, deer, and buffalo.

49. Amon Carter Museum of American Art, since 1961, houses his collection of paintings and sculpture from Frederic Remington, Charles M. Russell and more and is devoted to the study of American art.

50. Butch Cassidy and the Sundance Kid and their outlaw friends roamed “Hell’s Half Acre” in the old downtown frequenting the saloons, gambling halls, and the red-light district.  Stay in Etta’s Place, a Bed & Breakfast in downtown, named after the woman who was romantically involved with the Sundance Kid.

52. The U. S. Bureau of Engraving and Printing Western Currency Facility prints millions of dollars right here in North Fort Worth – free tour, but no free samples.

Where to Stay in Fort Worth: Find the Best Hotel for Your Budget

When looking for where to say in Fort Worth, Downtown is your best bet. Sundance Square has plenty of bars and restaurants. There’s public transport to Cowboys Stadium as well.

If you’re seeking luxury, you’ll find a handful of four and five-star hotels offering high-class facilities and services. Popular choices for luxury hotels include, but are not limited to, The Worthington Renaissance Fort Worth Hotel, The Ashton Hotel and the Hilton Fort Worth.

What is the best time to visit Fort Worth?

The best time to visit Fort Worth is between September and November when the temperatures aren’t overwhelmingly hot, the tourist traffic has died down and the Texas State Fair is in full swing.

Top Tours in Fort Worth 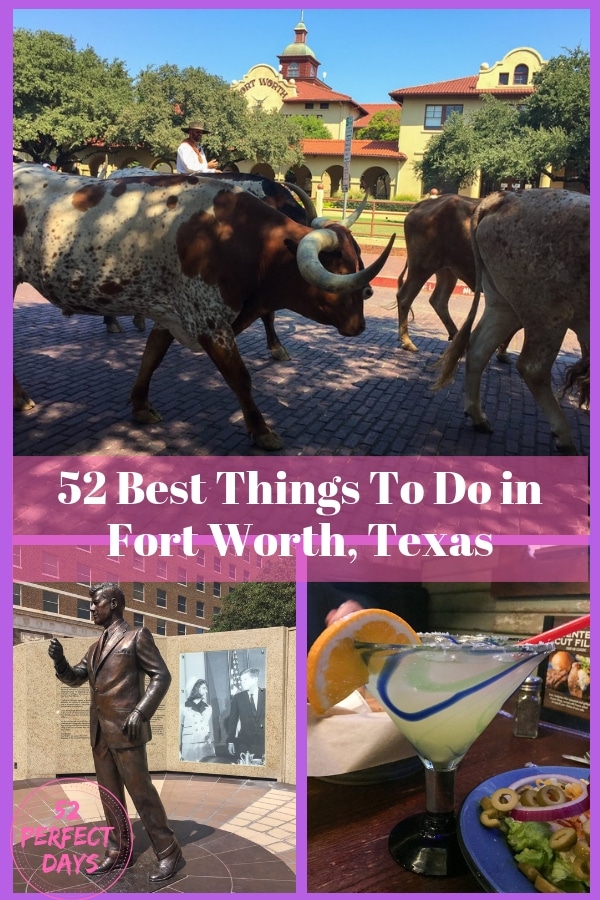 More Things to Do in Texas!

A Perfect Day in the Quirky Town of Marfa

Travel Writer/Photographer, a native Texan based in Fort Worth covering travel destinations, wineries, breweries, restaurants, cruises and much more locally, nationally as well as internationally from Peru to Canada plus Hawaii to Bermuda. Member of the ITWPA, International Travel Writers and Photographers Alliance and United States Press Agency USPA.

About the Author Janie Pace

Travel Writer/Photographer, a native Texan based in Fort Worth covering travel destinations, wineries, breweries, restaurants, cruises and much more locally, nationally as well as internationally from Peru to Canada plus Hawaii to Bermuda. Member of the ITWPA, International Travel Writers and Photographers Alliance and United States Press Agency USPA.
Instagram