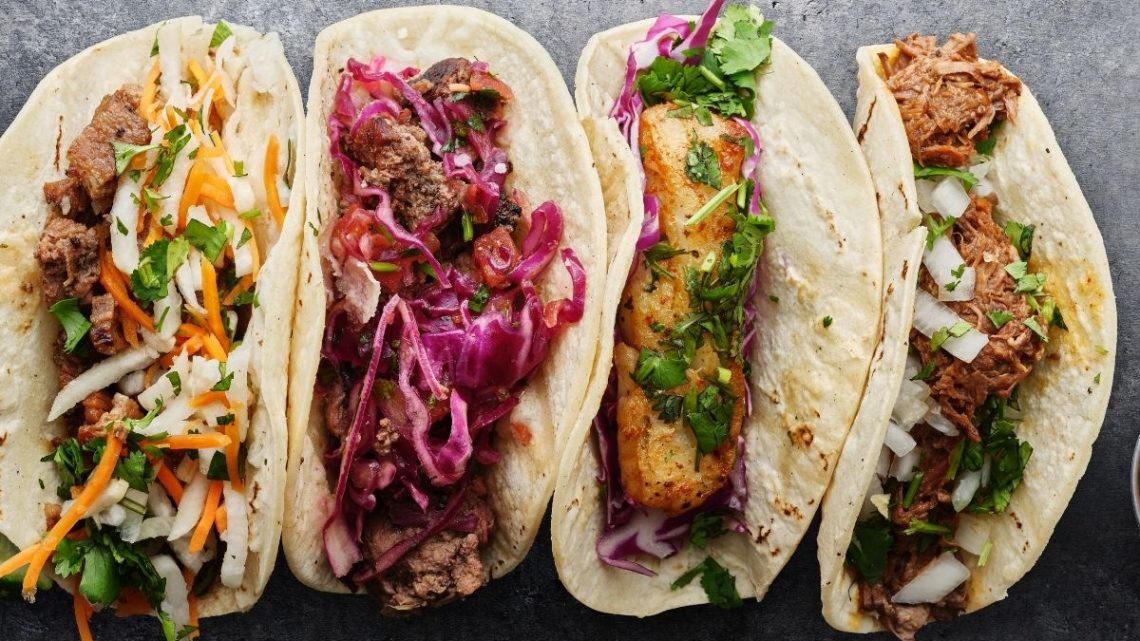 San Francisco is one of the best cities outside of Mexico for Mexican food. If you want to find the best tacos in San Francisco, we have the most updated list of restaurants, taco shops, and taco trucks.

Considering the fact that California was once part of Mexico, it’s not surprising that Mexican food throughout the state is plentiful. For this latest best taco in San Francisco 2022 update, new additions include Taqueria Vallarta, Taqueria Los Mayas, Cielito Lindo, and Hook Fish Co.

In San Francisco, where the ratio of restaurants to square miles in a U.S. city is surpassed only by New York, you’ll be spoilt for choice when it comes to authentic Mexican food. Whether you’re after a quick burrito at a neighborhood taqueria, or a sit-down dinner at a more upscale venue, here’s a guide to the best Mexican choices the city has to offer.

Unsurprisingly, the widest choice of taquerias can found in the Mission District, San Francisco’s Latin Quarter. Named after the Mission Delores that was built by Spanish settlers in the late 18th Century. Today the neighborhood is an eclectic mix of produce markets, thrift stores, dive bars, and restaurants. In the 1950s, Mexican immigrants began settling here, bringing with them their local food traditions that are evident in the throngs of taquerias and burrito houses that line the streets today.

Where to find the best taco in San Francisco depends on the type of taco you most enjoy. If you live in the Bay Area, or are visiting San Francisco, it’s a good thing there are so many excellent tacos to choose from. Don’t forget to check for the best Taco Tuesday deals. 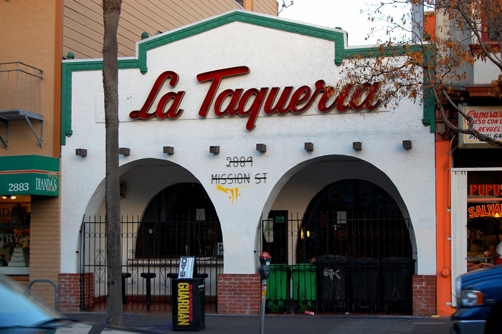 First up on Mission Street between 24th and 25th Street is La Taqueria. Open since 1973, this James Beard-award-winning taqueria is famous for their Mission-style burritos and carnitas tacos.

Although priced slightly higher than other taquerias nearby, you’ll be getting high-quality meat, organic ingredients, as well as fresh salsa and guacamole that are famous in their own right. La Tacqueria is truly where you can find one of the best tacos in SF.

This is also one of the few places in the city where you can get a crispy taco. The deep-fried tortilla is wrapped in a regular tortilla to give it extra crunch. (Although it’s not on the menu, order your tacos “dorado” style for extra crispiness). One downside is it only stays open until 9 pm, so if you’re craving a late-night food fix, you’ll have to look elsewhere.

The only downside are the long lines, that very often wrap around the block. But, let’s be real. It’s worth the wait.

One option is El Farolito, which stays open until 3 am on weeknights and 4 am on weekends. Like La Taqueria, El Farolito is informal and accepts cash only. Although the tacos and enchiladas are top-notch, it’s their tightly rolled, gargantuan burritos for which they are famous, and which many people consider to be the best in the city. 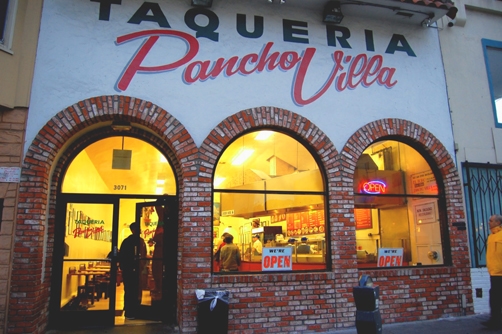 Pancho Villa on Mission and 16th Streets also offers excellent burritos, as well as a full salsa bar if you’re looking for a lively nighttime atmosphere. If you’re not hungry enough for their huge regular-sized burritos, order the baby burrito: although it’s slightly smaller, it’s still more than enough for an average appetite.

The food here is fast and consistently fresh, and there are good vegetarian options too such as the range of veggie burritos, or the garlic mushroom quesadilla. Pancho Villa’s popularity is also due to its convenient location right outside the BART station and a stone’s throw from the slew of trendy dive bars on 16th Street. Not surprisingly, this is considered the best taqueria SF has to offer! 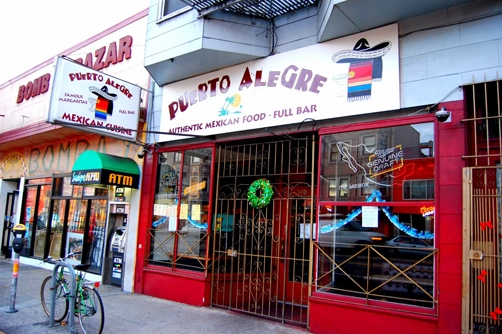 If you’re looking for more than a quick bite, a good option for a sit-down meal is at Puerto Alegre on Valencia and 16th Street. The restaurant’s popularity and no-reservation policy for parties under six means it gets crowded quickly, so get there early if you wanted to be seated right away.

Puerto Alegre is a great option for larger groups since they offer bargain-priced combo plates and margarita pitchers which are arguably even more famous than their food. If you’re lucky, you’ll be serenaded by a wandering Mariachi band before they continue on down Valencia. 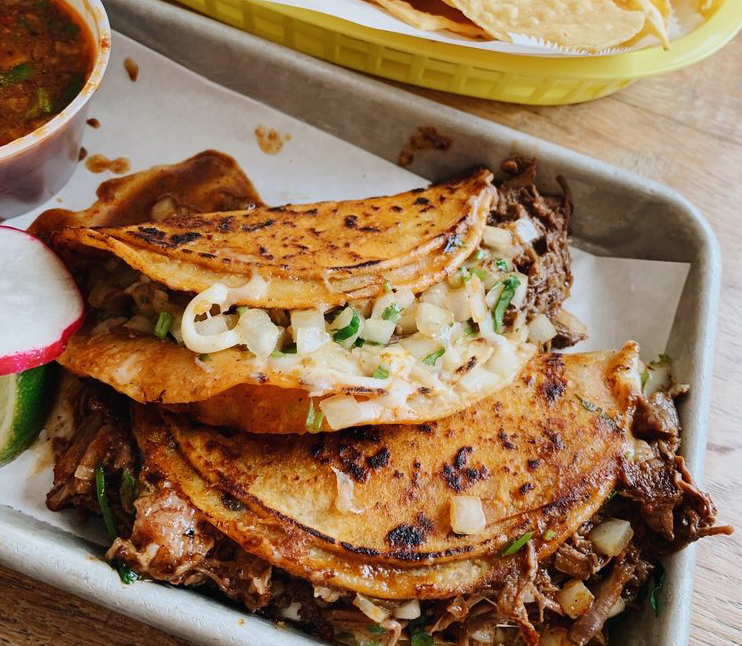 Their namesake Taco Patrón, with grilled shrimp and melted cheese is a must. They are known to have the best birria tacos San Francisco has to offer. So, another favorite is the quesabirria; the cheesy beef Tijuana-style birria taco with corn tortillas. Their beans are delicious and cooked with bacon, but they do offer a vegetarian option as well. 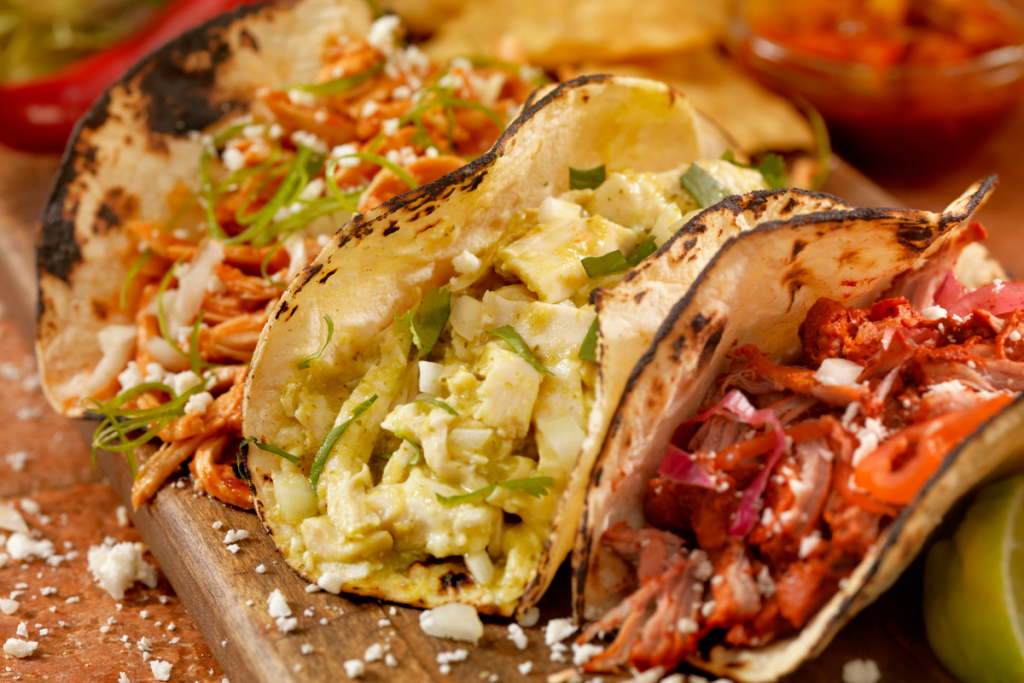 From the owners of Tacos El Patron, is this wonderful new addition to the best tacos in San Francisco list! The menu at this Mission taco shop is centered on tacos de guisado, which are tacos topped with saucy stews and sauces. The menu offers 18+ different varieties every day.

Top sellers are the pork chile verde and cochinita pibil (a traditional Mexican slow-roasted pork dish from the Yucatán Peninsula).  They are also known for their vegetarian options.

The El Gallo Giro truck is parked in its usual spot at 23rd and Treat Ave from 10 a.m. to 5 p.m. Monday through Friday. They are consistently voted the best taco truck in San Francisco. Come by for juicy carnitas and flavorful grilled chicken street tacos SF has to offer. 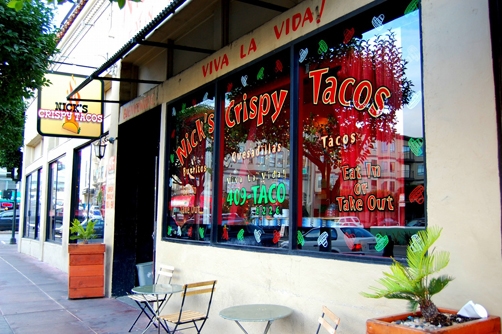 Outside of the Mission, Mexican restaurants tend to be more upscale. One example is Nick’s Crispy Tacos in Russian Hill, which shares seating space with the Rouge nightclub in order to save on rental space.

Because of this quirky arrangement, you can enjoy crispy fish tacos (order them “Nick’s way” for added cheese and guacamole) while seated in velvet booths with chandeliers overhead. If you go on Tuesdays, enjoy Happy Hour until 9 pm, and tacos are $2 each – you’ll be hard-pressed to find a better deal than that in the area or a better fish taco in San Francisco. 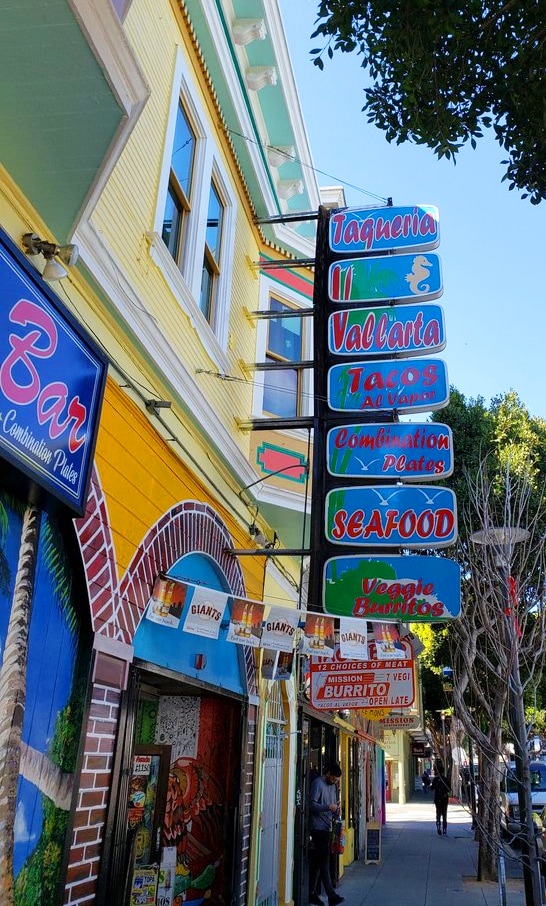 Taqueria Vallarta is located in the Mission District and are known for their delicious street-style tacos! Head to the taco cart located near the entrance and place your order with favorite toppings. Popular tacos are the carne asada, lengua (beef tongue) and al pastor. Their avocado salsa is one of the best in the city as well. If it’s a nice day, order your tacos and enjoy them at one of the outside tables! Another plus is they are open late which is rare in the city. 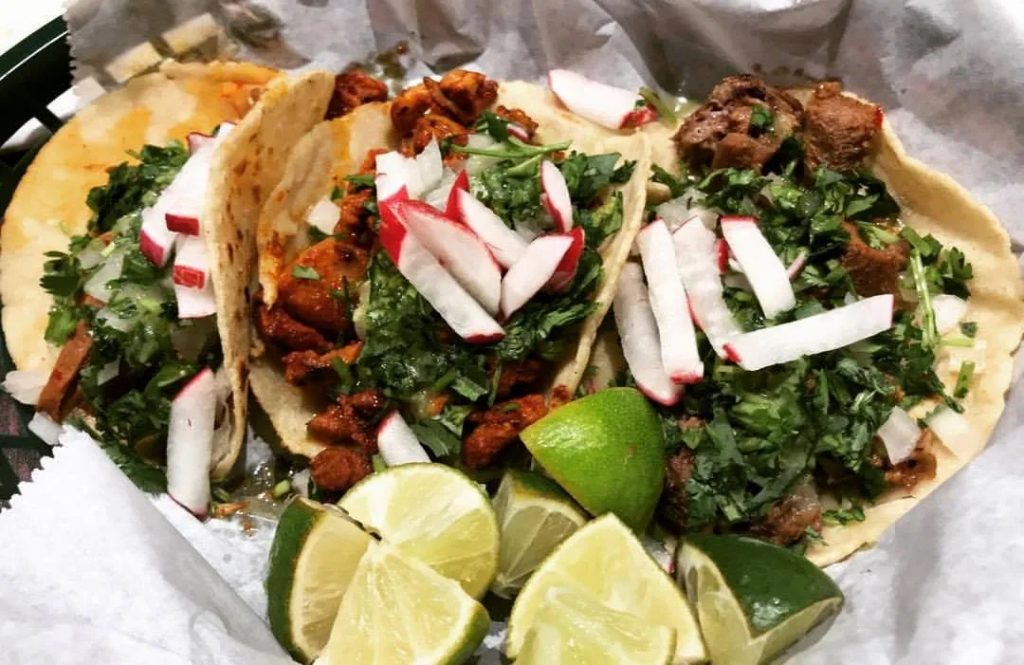 Located in the Richmond district, Taqueria Los Mayas serves up Mayan-style tacos and food influenced by the Yucatan. They are famous for their handmade tortillas and Al Pastor tacos. Carne Azada, Steak Chorizo, and shrimp tacos are also great options. A local favorite is the plantain burrito as well as the Pozole.

If you love a good fish taco, Hook Fish should be top of the list. Considered the best taco in San Francisco by many, the Hook Fish is located one block from Golden Gate Park and a few blocks from Ocean Beach. Their specialty is the fish taco, served grilled or poke style with pickled slaw and spicy aioli. This is a great place for fish and chips and crab cakes as well. 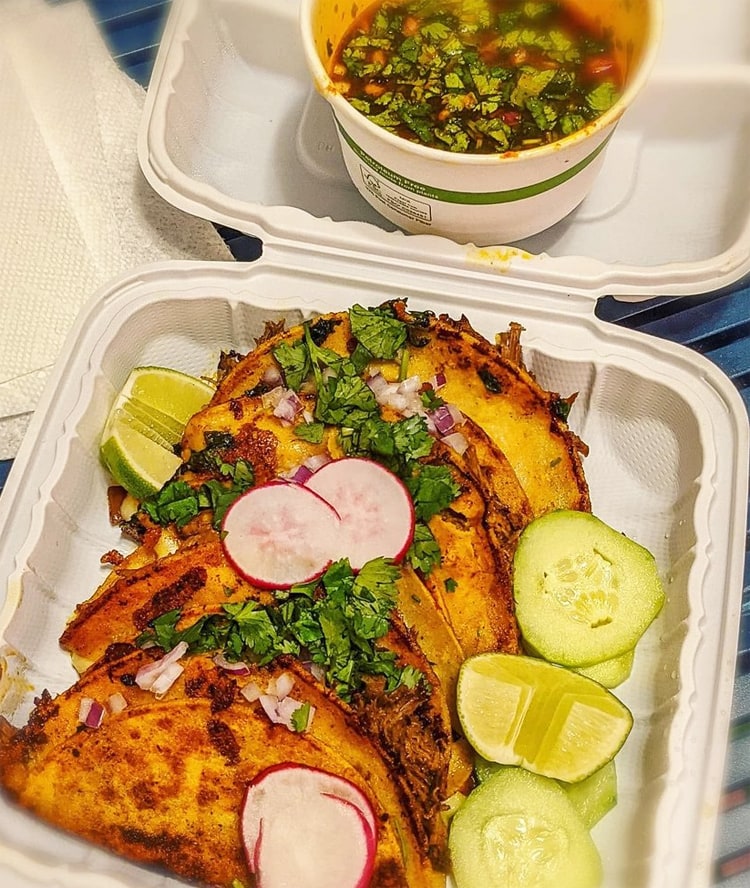 Cielito Lindo is located in Richmond and is famous for its Quesabirria tacos. In fact, Cielito Lindo is considered the best taqueria in San Francisco for this speciality. Quesabirria tacos include birria-style cooked beef folded into a tortilla with melted cheese and served with a side of consommé for dipping. It has been described as a cross between a taco and a quesadilla.

While on your search for the best taco in San Francisco, don’t miss the opportunity to try a Mission-style burrito. This jumbo burrito starts with an oversized flour tortilla filled with rice, pinto beans, cheese, sour cream, salsa, guacamole or avocado and pico de Gallo. If you like it spicy ask for extra jalapeño pepper and red onion. 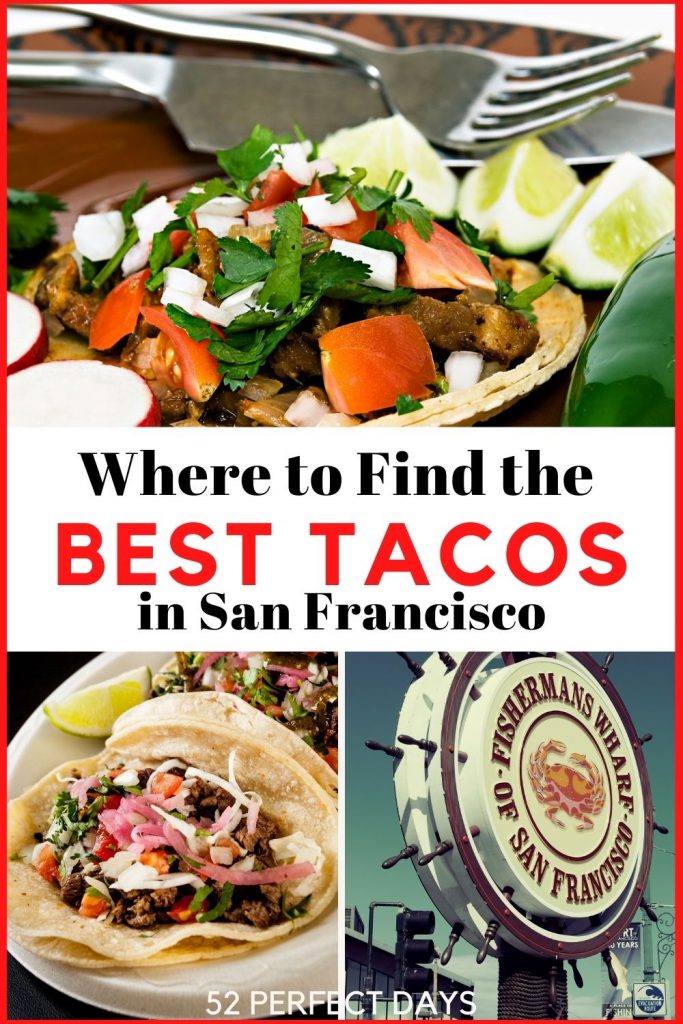