New York City is unique in that it’s constantly giving visitors an escape from their everyday scenery. Where else can you spot a Naked Cowboy and his…guitar?

Anyone looking for something outside their definition of normal should add at least one trip to the Big Apple on the bucket list. Just ask the military; specifically the Navy and the Marines. Yes, the defenders of our beloved waterways make their way into New York City each May for Fleet Week. Why? Let’s not get anyone into trouble here, but those servicemen and women need to unwind, or turn up as the kids say, just as much as we civilians do (if not more than us; kudos to all those who serve and protect our 50 states!). The big apple offers up a lot of extremely expensive hotel options, so we wanted to share a few of our favorite budget-friendly New York Hotels.

New York City nightlife welcomes our men and women in uniform during Fleet Week, with open bars. This means, free or discounted passes, stage play tickets, and cocktails are readily available to all sailors and Marines. If you are one of the few and proud, don’t get left behind when it’s time to head back to the ship. Stay as close to Chelsea Piers as possible as this will offer a foolproof way to hop back into service. The Chelsea Savoy Hotel is a budget-friendly option near the pier that over-delivers on price and location. With the train station a few feet away, take the subway anywhere throughout the five boroughs for the greatest New York City experience. Or stay in Manhattan and make it back to the ship before it sails away.

The party is…wherever you are

For first-timers, a trip to New York is probably overwhelming any time of the year. Add in a military presence during Fleet Week and one could easily opt to retreat in the comforts of their hotel. Stay somewhere swank, where Manhattan shows its charm from the inside. Located in New York’s Lower East Side is the Sixty Les Hotel, a very-downtown and cost-conscious property that still offers New York newbies an unforgettable experience. Near Chinatown and Little Italy, SOHO and TriBeCa, the Sixty Les Hotel is great for when you’d rather dip into the city for a few hours, and not all day. Why not let the good times roll without the business of Rockefeller Center (NBC’s overly caffeinated Today Show crowd, anyone?) or that Time Square traffic we’ve all seen on TV?

On the other hand…it’s New York during Fleet Week!

Ladies, who doesn’t like a man in uniform? How about groups of men in uniforms for seven days straight in New York City. Stay at the Skyline and take in the sea of sailors and Marines with the city’s skyline as the perfect background. It’s in the heart of New York but the rates rival those found in New Jersey. A budget-friendly boutique hotel, plus men in uniforms; I smell the ultimate girlfriends getaway. You’re welcome.

Must see during your Fleet Week stay: Empire State Building

Image via Trover by John Cabuena

Ice skating is usually left for the winter months, but Rockefeller Center still delivers on sight-seeing when the weather’s warmer. By the way, don’t let my earlier mention of the Today Show stop you from joining in on the early morning fun. The crowd forms as early as 5:00, but that’s like noon for those in the military, right?

Today’s Summer Concert Series, the free concert series featuring the latest and greatest in music, has already begun and there is usually a concert scheduled during Fleet Week. If not, there’s always the thrill of being seen by millions of Today watchers! Stay at Pod 51 for a close walk to 30 Rock, or for a spacious option (with studio rooms!) to watch the show from the comforts of your room. Hope these budget-friendly New York Hotels suggestions have been helpful!

Sailors, Marines, and civilians alike deserve a break, too. Check out Fleet Week in New York to get your summer going in one of the greatest cities in the world, with some of the greatest men and women in the military.

And to all those who have protected our country, in and out of the water, thank you. 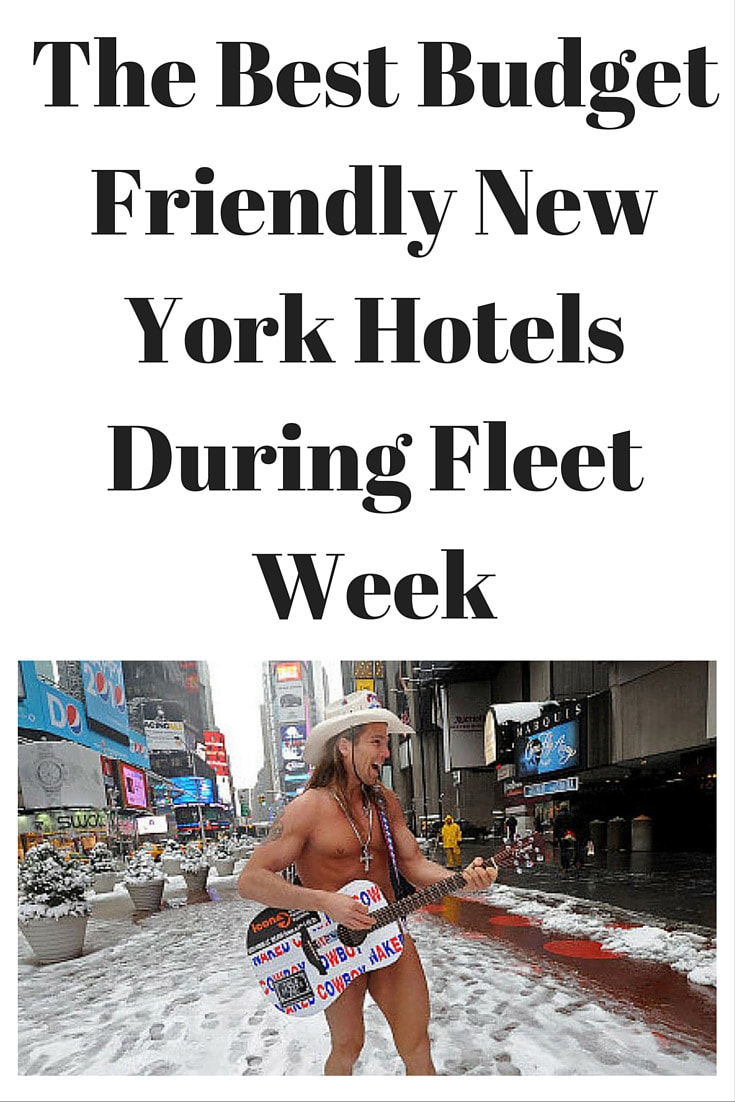 Tyjuana Wilson is a freelance writer, copywriter and budget travel whisperer. Her hotel choices for the travel site Hipmunk are usually found here. More importantly, she also watches her 18-year-old princess, Tyra, grow before her eyes.