Contrary to public opinion, there is an excellent chance of actually surviving a day spent in downtown Vegas. This assumes, of course, that you are smart enough to not wander too far away from the two-block-long, traffic-free area that houses what the P.R. folks refer to as the Fremont Street Experience. 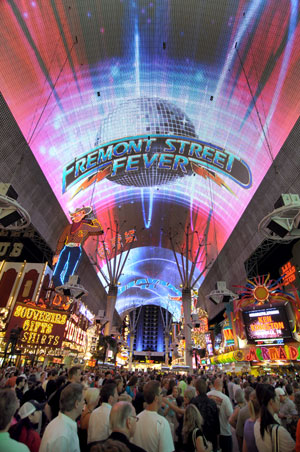 Downtown’s 10 casinos have for a few decades now taken a back seat to the Strip’s glitzy properties, settling for table scraps and existing on a diet of locals and low-budget visitors. It has an edge, especially during the day, but at night the brilliant canopied, computer-generated light show that envelopes the entire operation helps cover up the warts.

There are no 10-acre fake lakes and no faux Eiffel Towers and no pirate shows and no propane-fueled exploding volcanoes downtown, but if you’re looking for a genuine taste of what Vegas once was, it’s a good escape from the phoniness.

Golden Gate
Start your day with lunch around 2 p.m. at the Golden Gate, whose main claim to fame is the 99-cent shrimp cocktail. The dish is actually an anomaly because it now costs $1.99, but if the extra buck bothers you, you probably shouldn’t be on vacation, anyway. It’s a nice deal – in fact, the Golden Gate website calls it the best tail in town (get it?). 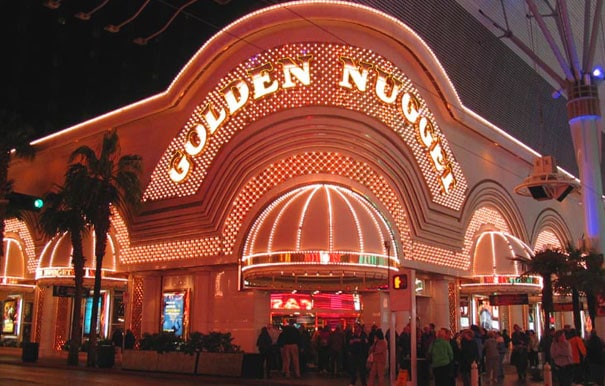 Next, head to the venerable Golden Nugget Hotel-Casino, a 4.5-star property that sits in the middle of it all. If you see a downtown Vegas scene in a movie (Leaving Las Vegas, or the Bond classic Diamonds Are Forever), chances are good you’ll recognize the Nugget. The Nugget was featured on a reality TV show several years ago called the Casino. 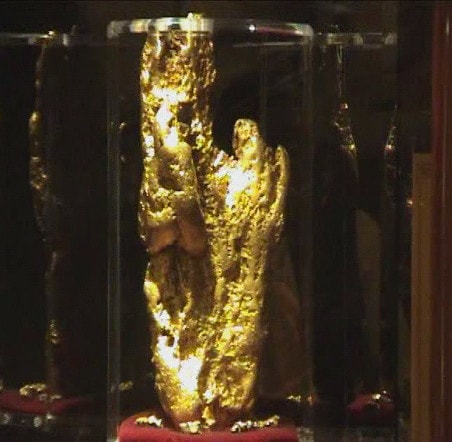 If you decide to spend a night or two in one of the 2,355 rooms while checking in you can check out what is billed as the world’s largest nugget of gold –– an 875-ounce rock dubbed the Hand of Faith. 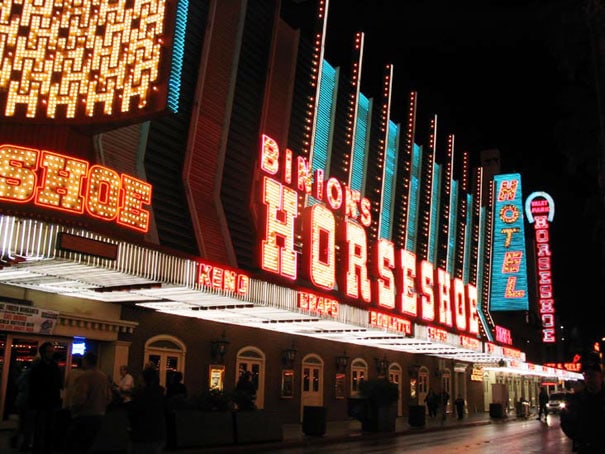 Right across the street from the Golden Nugget is Binion’s, which was founded by the legendary Benny Binion. Binion was a Texas criminal who headed west and became a Vegas legend as the first casino owner to offer free drinks to gamblers.

Now, this is a standard operating procedure to comp drinks in almost every casino in North America. Binion, who died 22 years ago, also was the architect of the World Series of Poker, which started with 7 players in 1970 and now draws thousands [the event has moved several times, and last year was held at the Rio, located about one mile west of the Strip].

Note to people who hate change: Binion’s no longer has a viewing case that contains one million dollars in cash.

Serious gamblers –– those who try to find the game most advantageous to the player –– in Vegas often find their way downtown, where the slot machine payoffs are usually a bit better than on the Strip and blackjack rules aren’t as predatory as the 21 games offered at the semi-criminal enterprises on Las Vegas Boulevard.

Downtown casinos such as the Golden Nugget, Plaza and Fitzgerald’s will almost certainly offer better Blackjack games than at the Bellagio, Caesars Palace, Venetian and Wynn.

Hugo’s Cellar
For dinner, if you’re looking for classy dining, your best move is the Hugo’s Cellar, located in the Four Queens. This upscale eatery stands up impressively to most of the overpriced celebrity-chef restaurants on the Strip. Go a bit early and have a drink at the bar, its old school and you can really get a sense of the place.

Meals begin with the salad cart, a salad bar delivered tableside. For a main course you can’t go wrong with the ribeye or the filet with bleu cheese topping and a side of garlic mashed potatoes.

After dinner wander around the hotel and play little craps or the slots, you will feel like its 1975.

After a bit of gambling, head to Fremont Street, as it definitely puts its best foot forward at night, when the canopied light shows cause thousands of people to stop in their tracks and gawk upward for five minutes every half hour. It’s a good take, and while there are things you don’t want to remember about downtown, the show provides good video memories you can access from your Smartphone.

WHEN TO VISIT LAS VEGAS

The best time to visit Las Vegas is from March to May and from September to November. While you’ll find plenty of travel deals throughout the year, the spring and fall shoulder seasons offer the most moderate weather.

If you enjoyed this article about Downtown Vegas: Head Back to 1975, you’ll also love, The Ultimate Las Vegas Girlfriend Getaway

Traveling To Las Vegas Soon? Here are a few tips:

How to get there: McCarran International Airport is the main airport in Las Vegas. There are flights on a multitude of airline carriers. Las Vegas is also just a four-hour drive from Los Angeles.

Where to stay: There are many places to stay in Las Vegas, Nevada. There is a wide range of hotels, from budget to luxury. For a luxury hotel that won’t break the bank, I recommend the Wynn Las Vegas, which is currently the #1 hotel on Tripadvisor. For a mid-level hotel, I suggest the Aria Resort & Casino.  Finally, for a budget hotel, try the Planet Hollywood Resort & Casino. You can also check HotelsCombined for the best Las Vegas Hotel Rates.

What to pack: In Las Vegas, seasons can change pretty fast. It’s hot in summer and can drop into the low 30’s in the winter. Number one– you’ll want a good pair of walking shoes. You can easily walk miles daily. Just getting from one casino to another can be a trek (I love Keen).  Vegas gets cold in Winter, you’ll want to pack layers including a light sweater or scarf.

6 Indispensable Items to Pack for a Las Vegas Vacation

About the Author Larry Houser