As a resident of New York City and a New Jersey native and largely lacking in Grand Canyon knowledge, I did not know just what the volunteer trip would bring. Weeding, I assumed, since the theme of the trip was invasive species removal. 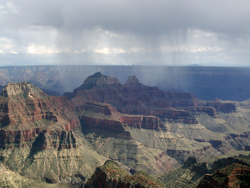 For the most part I was right. However, I also assumed that we would be working in intense desert heat. I did not realize that the North Rim, the far less traveled side of the canyon, rises to 8000 feet, 1000 feet higher than the hotter and much more crowded South Rim. And that it is only as you hike farther down into the canyon that the heat really intensifies. As we drove closer to the campsite that first evening, passing grassy meadows bordered by aspens and pines and feeling a cool clean mountain air race by the open window, I realized that the North Rim is alpine—chilly, crisp, and beautiful.

Our work the following day took place on grassy hillsides with patches of ferns, quaking aspens, and painterly ponderosa pines. The sun was hot but the breeze stayed cool and drew my attention now and then away from the invasive hound’s tongue we were pulling and up into the remarkably cornflower blue sky. Then I would watch the wind rock the spindly green tops of the pines and listen to it rustling like so many serpents the dollop leaves of the aspens, those little sorcerers.

And then, yes, I would return to my work of pulling up the stubborn hound’s tongue where they were hiding among the ferns. I admit the possibility that I worked somewhat slower than my fellow volunteers due to those moments of marveling at the picturesque surroundings, but honestly I tend to be somewhat slow and meticulous at things like gardening. And the truth is that I didn’t have to sit there all day gaping at them to take in my surroundings. When you look too hard is when they start to elude you. It was enough simply to be at work hacking up weeds for hours, taking now and then a moment’s pause to look up and sip down the view of the sun and the sky and the storybook forest, fortifying like cold mountain spring water, and then return to crawling through the patch of ferns.

It was better to be engaged, to spend time focused on something particular, the hound’s tongue, for example, which we took care to distinguish from their look-alike native species. It was the perfect complement to those long moments spent musing on the magnificent panorama of the canyon—every last detail of the natural world contains caverns of wonder and mystery that run as deep as the canyon itself.

The mutton grass, for example, whose seeds we collected as part of our final day’s work, had these minuscule seeds that were each encased in their own woven seed pod so tiny that at first it was hard for me to distinguish between an empty and a full one. My slender fingers felt like boxing gloves peeling back the casing. In this task, with the lives of those minute, numerous seeds as my focal point, I felt as though I’d been granted access to the busy, intricate world of tiny things.

Spending a few days with a group of botanists and other plant experts is a great way to dip into this well of fascination, wherein the inclination of each vein on the back of a leaf tells a story and becomes a vital clue to the case of the endless mystery of the natural world.

For some of us (myself), this was far more compelling than the mystery of waiting tables back in the city. But for all of us volunteers, I think, the trip was a refreshing opportunity to get outside, move our bodies and break a sweat doing simple, meaningful work.

There I was on day three out of four, sandwiched between months of riding the subway and weaving among skyscrapers and throngs of pedestrians—there I was shoveling “duff” (piles of fallen pine needles) into a miniature tractor-sort-of-vehicle so that we could replace it in a re-vegetation area. The proper name of this tractor-like contraption aside, it felt so good to strain my muscles against something other than a tray of drinks or even a yogic downward dog. To shovel piles of duff and pull weeds out of great mounds of dirt in the name of conserving such a treasured landscape, while meanwhile it surrounds you, deceptively passive and humbly glorious, can be very nourishing to the soul.

And nourishing it was. Four nights I spent tucked in my sleeping bag within a grove of aspens beneath the 8000 feet closer starry sky feeling the cold cleansing alpine wind sweep over my face, hearing it moan all ghostly through the canyon walls and then rise to breathe sudden life into those quaking leaves. The sound of their rustling would come down from above like jangling beads or shaking rattles. And then the sleep that came was clear and dark and alpine beneath those leaves, those little sorcerers.

On the last morning that we awoke at our campsite just beyond the edge of the rim, several of us crawled out of our sleeping bags into the cold, pre-dawn air and rushed to Bright Angel Point, the premier vista point of the North Rim, to watch the sun rise over the canyon. We gathered together for a photo of ourselves silhouetted against the fresh light fanning into the sky—five people of various ages, occupations and backgrounds, having departed our usual routines to come together for four days of pulling up weeds (for free!) in the Grand Canyon.

As we returned to the campsite, it was already redolent with the smell of eggs, potatoes, bacon, sausage and coffee— the one last delicious meal our trip leaders would prepare for us. Soon we would return to our respective homes, families and jobs, while the North Rim reveled in its relative freedom from invasive plants.

About the Author Kelly Egan