On a sunny Saturday, history buffs and archeology enthusiasts’, can head to Lower Manhattan and traverse the winding historical streets where the city was first settled by the Dutch in the 17th century and explore where the modern city meets its pre-revolutionary era past. Add a tour that takes a unique peek at the history that you’d probably miss on your own and dinner in one of the city’s oldest watering holes and you have the makings for a truly experiential day.

Begin the day at the corner of Fulton Street and Broadway, site of St. Paul’s Chapel. This church, built in 1766 remains Manhattan’s oldest public building in continuous use. Tour a display of 9/11 memorabilia that showcases St. Paul’s ministry in the weeks and months after September 11th. Also on display is George Washington’s pew that he occupied when he was in New York City. St. Paul’s chapel opens at 10 am but early birds can take a tour of Ground Zero.

Then travel south on Broadway to Suspenders Bar & Restaurant, a firefighter-themed establishment owned by former NYC firemen. Try the Suspenders burger or one of their salads for some lighter fare. After grabbing a bite continue south one block to Trinity Church Wall Street, an Episcopal church that was founded by the charter of King William III of England in 1697. The present Trinity Church, designed by Richard Upjohn and consecrated on Ascension Day in 1846, is considered a classic example of Gothic Revival architecture and is listed on the National Register of Historic Places.

After perusing the church and accompanying cemetery, stroll over to Pearl Street for a 2 p.m. departure of an archaeology tour of Manhattan with Context Travel. Accompanied by a trained archeologist, this three-hour tour visits some of the city’s recent archaeological sites where artifacts spanning thousands of years including into the early modern era (20th century) have been uncovered.

The tour begins at the site of the city’s first large-scale archeological excavation that took place from 1979-80, illuminating such finds as Governor Lovelace’s Tavern, which stood from 1670 to 1706 and served temporarily as City Hall, and a cistern dating from around 1645-1656.

Tour highlights include a visit to the Fraunces Tavern. This restaurant bought by Samuel Fraunces in 1762 exemplifies the opulence of Europe. Among the notable historical events that transpired inside these walls included meetings of the Sons of Revolution and the gathering where Washington bade farewell to his officers on December 4, 1783. Having a historian fill in the blanks as the group reads the markers outside the exterior made the tavern’s history come to life.

The most unique opportunity of this historical tour was their ability to provide access to New York Unearthed, a museum not open to the general public. This hidden gem offers a rare glimpse into a singular slice of New York. Inside the museum, dioramas display artifacts from pre-colonial times to the 1950s while a three-dimensional model illustrates what lies underneath the Big Apple skyline. 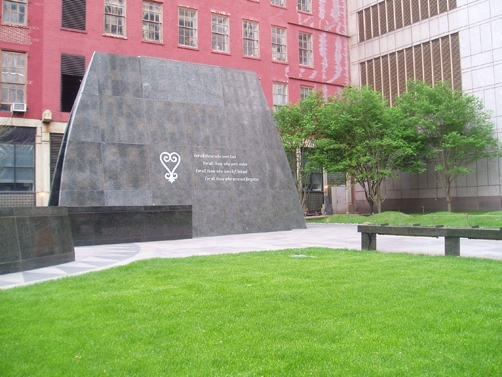 During the tour, there is also a visit to Battery Park. Walk around Castle Clinton, a US National Monument and ticket booth for those wishing to purchase tickets for the Statue of Liberty ferry. Throughout the park, one can find war Memorials from World Wars I and II, the Korean War, and the Vietnam War; and the damaged Sphere sculpture recovered from the former World Trade Center site after September 11th.

The tour also includes sightings of the exteriors of the shrine of America’s first saint, Elizabeth Ann Seaton; the Alexander Hamilton Custom House; India House’ Delmonico’s Steak House’ and Federal Hall, the site where the Bill of Rights was adopted. Another tour highlight is walking around be the South Street Seaport, where again, a guide helps explain the historical significance behind such sights as the Ambrose Lightship (1885) and the art galleries along Water Street.

The tour concludes at the African Burial Ground. This National Monument contains the remains of freed and enslaved African Americans buried on a 6.6 acre burial ground during the 17th and 18th centuries. The grounds close at 5pm, but as admission is free, visitors can return on another day to explore the interior at their leisure. 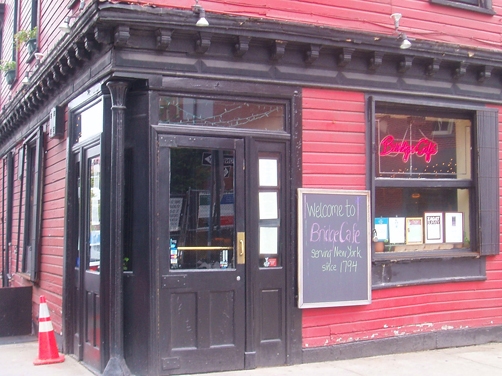 After a full day of digging up New York history and discovering a rare slice of the Big Apple, you’ll be ready to relax and discuss your newfound knowledge. So, head to Bridge Café for dinner or drinks at the bar. This establishment, which was once home to a brothel, prides itself on being one of the city’s oldest watering holes. On Saturdays, the restaurant remains open until midnight, so there’s plenty of time to unwind and chill right next to the Brooklyn Bridge in the heart of New York City history.

Useful Information: The Archeology tour is offered at 2pm every Tuesday and Saturday and the $65.00 price includes admission fee to New York Unearthed Museum. Reservations are required.