Travel Restrictions for US Citizens

10 Tips to Pack Makeup for Travel

Where to Eat, Play and Stay: Top Things to do in Puerto Peñasco, Mexico

A tiny tear drips from the eye of the 400-pound turtle as she releases a slimy, ping-pong ball-like egg into a sandy pit. About 100 eggs later, when the nest is filled, the turtle methodically flaps her back fins to pack the hole with sand, creating a cozy cocoon from which hatchlings will emerge in about seven weeks.

As she bids farewell to the nest and slowly lumbers back toward the surf, the turtle leaves behind distinctive bulldozer tracks in the sand. Once she enters the water, waves crash around her barnacled-covered shell as she paddles out to sea, ending a three-hour stay on land – the only time in a year she hasn’t been in the water.

This amazing ocean odyssey happens hundreds of times each summer night along the South Florida Atlantic coast, the prime nesting area of endangered loggerhead sea turtles in the western hemisphere.

Our front row seat to this memorable adventure allows us to watch beach rangers mark the fresh nest with a sign and surround it with bright tape. Over the mound, they place wire mesh to ward off predators like raccoons and birds. As for humans, federal laws protect these endangered species, so tampering with a nest could bring up to a $50,000 fine and a year in prison.

These and many other interesting facts are disseminated during our four-hour turtle walk tour hosted by experts from the Loggerhead Marine Life Center in Jupiter, Florida. One of the more startling statistics we learn is that sea turtles have thrived for millions of years, but only in the last few decades have their numbers dwindled. In fact, only about one percent of the hatchlings ever reach maturity. Their most serious threat is artificial light. As the hatchlings crawl out of their sandy nests, they’re supposed to instinctively migrate toward the moonlight over the ocean. But in many cases, it’s light from a street lamp or a business that draws the disoriented hatchlings away from the ocean and to a certain death.

Thankfully, many communities such as Palm Beach County, Florida have passed ordinances requiring oceanfront lights to be dimmed during the summer hatchling season. And we see examples of that as we walk back to our beachside hotel, looking at numerous shaded lights.

The next day we lounge by the pool at the Jupiter Beach Resort and Spa, talking turtles and reminiscing about our previous night’s adventure. We also look forward to the night ahead when we will take another nocturnal trip. This time our destination will be The Everglades National Park to see the notorious American Alligator.

Just before dusk, we drive about 45 minutes to the Saw Grass Recreation Center where we have signed up for the ‘Red Eye Tour,’ a nighttime airboat ride into the swamps to view all things creepy and crawly.

With a chorus of crickets and the occasional croak of a bull frog filling the sultry air, our 40-foot-long airboat takes off. Within minutes we are soaring over the saw grass and cattails at 35 miles per hour, breathing in the sights and sounds of this subtropical eco-system with many exotic species of plants, animals, reptiles and insects not found anywhere else in America.

Suddenly, the gator is spooked and creates a small wake as its massive tail swishes the water to quickly submerge. Most gators can remain under water for up to 30 minutes, providing perfect cover to entice birds, fish and even larger mammals like deer and wild hogs to closely approach and then be taken down in a swift attack.

Floating nearby is a baby gator, looking content in a pool of mossy green slime. It’s odds of survival are much greater than a baby sea turtle. Alligators are not endangered and have been thriving in the Everglades in recent years. One of the reasons for their increased survival is that unlike turtles and their oceanfront accommodations, gators live in a remote ecosystem with snakes, bugs and humidity – not a pleasurable environment to humans. Therefore they don’t encounter many man-made threats and live longer.

The glow of the moonlight blazes a trail as we ride back to the dock. It’s been an exhilarating, environmentally-enlightening past two days for our family. Our teenagers, as well as our younger children (ages 8 and 11), rave about the experience which we recommend to anyone interested in seeing sea turtles and gators in their natural habitats. These two species are living reminders of the dinosaur era, offering a glimpse of what our planet was like millions of years ago and what it can continue to be if we remain good stewards of the environment. 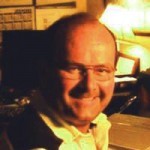 Bob Tucker is an award-winning former journalist and current public relations professional. He enjoys writing freelance travel articles about adventures with his family.

Previous post Searching for Manatee on the Indian River Lagoon

About the Author Bob Tucker

Bob Tucker is an award-winning former journalist and current public relations professional. He enjoys writing freelance travel articles about adventures with his family.