Take a break from Portland’s rainy season and get away from the crowds by trekking down to the Southern Oregon Coast. Set out along a scenic 5-hour drive down Highway 101 passing along some of the state’s rugged and unspoiled coastline. During fall foliage season, consider heading down Highway 38 if you want a drive amidst nature’s rainbow of fall colors. 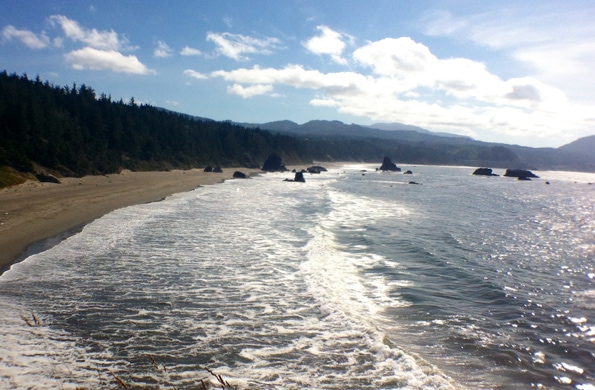 After your drive, stop for lunch at Redfish, a restaurant and local art gallery situated right next to Battle Rock Park in Port Orford. Gaze at one of the more stunning views of the Oregon Coast while sampling their locally sourced seasonal fare. Ask your server for the fish and shellfish in season.

Be sure to taste the Arch Rock Brewing Company’s State of Jefferson Porter, a beer made from a production-style microbrewery located in nearby Gold Beach that garnered a first-place award at the 2013 Great American Brewing Festival.

Following lunch, take a quick hike on the hill to the top of Battle Rock. This site was named after the historic battle that took place at Battle Rock where the Qua-to-mah Native Americans fought Capt. William Tichenor’s men in 1851. When you get to the top, stop and savor the view. Perhaps you might be able to spot any gray whales hanging out in the cove area. Next, drive to Bandon and check out Face Rock Creamery, a local operation that specializes in making hand-crafted gourmet cheese. Among their #1 award winning cheese

curds include a spicy three pepper cheddar titled “In Your Face” and their garlic cheddar “Vampire Slayer.” During the 2014 Feast Portland celebration, they created a delectable Bloody Mary shooter featuring their Vampire Slayer cheese curds. Before leaving Bandon, be sure to take a stroll around Bandon State Natural Area. As you walk along the loop, allow the pressures of time to wash away as you immerse yourself in the stillness of the sand and weave in and out of the rocky caves.

Depending on the winds, the waves could be licking at your heels or slamming against the rocks. Either way, the unspoiled beaches unsullied by houses and hotels afford you the opportunity to tune out the world and tune into the moment. Time and weather permitting, stay for a bit and watch the sunset over the cragged rocks for a picture-perfect moment.

Cap off the evening with a beer and casual fare at the 7 Devils Brewing Co., a small craft brewpub that’s become a local hangout in the Coos Bay area. Order a beer sampler, so you can taste the variety of their offerings before deciding which beer you want to pair with your meal.

Even though they are a local brewery, they brought some of their 100-percent American-grown beer to 2014 Feast Portland so those outside their coastal radius could sample the freshness.

Finally, end your evening at the Mill Casino Hotel, which is located on the waterfront in nearby North Bend. Depending on your mood, try your hand at the casino, take in a comedy show, hang out at the bar, swim in their indoor pool, or luxuriate in their hot tub. Wake up refreshed to a morning breakfast at the hotel. After breakfast, take time to enjoy one last adventure on the Southern Oregon Coast with a dune buggy tour of the Oregon Dunes National Recreation Area with Spinreel Dune Buggy & ATV Rental. Explore a portion of the 40 miles of wind-sculptured sand dunes towering up to 500 feet above sea level with a tour led by an experienced guide. Following this introduction, consider setting out on your own by renting a dune buggy or 2- or 4-seat vehicle.

On the return trip to Portland for a 4-hour drive along Highway 101 for another viewing of the state’s panoramic shoreline. As 363 miles of the Oregon Coast are free and open to all, you can stop and savor the shoreline as long as you’d like until you arrive back in Portland rested and refreshed.