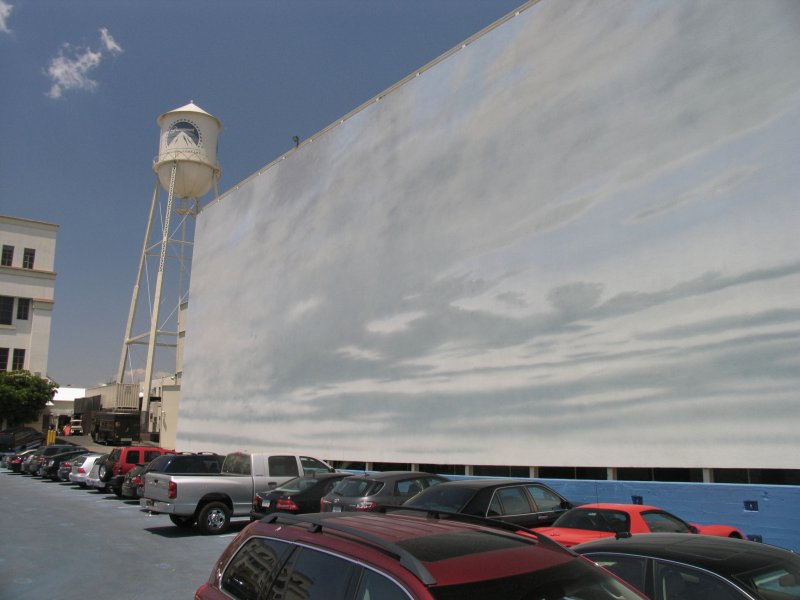 A golf cart is provided to drive you around from set to set although there is a bit of walking on the actual sets. This is a true production tour, not an “entertainment/theme’ tour. Paramount continuously films a large variety of TV shows so you never know which set you will walk onto or which ones you can’t access due to live filming. When we were here, Eddie Murphy was filming a new movie and to indicate a live set, flashing red lights shine outside the main set entrance.

It is recommended you arrive at least 15-20 minutes early. After you go through security you will meet your tour guide at the “coffee/snack shop”. Look for employees and actors lounging around drinking coffee inside and outside on the nearby tables.

Tours are always quite small – maybe 10 people or so. The nice thing about this tour is each tour is different due to always varying production schedules as well as the fact that there is no set script the tour guides need to adhere to. This is quite refreshing and *very* personable as it helps liven things up for the tour guides and for you should you return for an additional tour.

Another note – always ask questions…this also helps keep things lively for your group as well as your tour guide. Our guide was awesome…always trying to get us onto sets and near live filming. We were also able to meet several set construction employees. Think movie making is all glamour for actors? We saw many of the extras just sitting around listening to Ipods looking bored. In addition to the massive sets that are constructed for Television and Movies, Paramount also has outside sets – including their New York City back lot – which down to the most mundane details such as scuff marks on sidewalks resembles a real city.

Did you know that studios rent out their space to other studios? So despite a movie being produced by one studio, in actuality that movie may have been filmed at a number of studios. Another highlight is a visit to Paramount’s Camera office where you may meet with some of their key employees who work here.

Did you know that the majority of movies and TV programs are still shot entirely with film. Until much higher quality affordable digital technology comes along, the film industry will continue to use tried and true technology. Paramount Studios is the only major studio actually still located in Hollywood.

Paramount has a long rich history with film and some of this history is touched upon by your guide. In addition, a color pamphlet is given which provides further historical details. Other highlights are the huge painted sky that towers over the “B Tank” – what is normally used as an employee parking lot, but which can also be filled with water for “ocean” scenes, the bench where Forest Gump sat, and if not being used, entry to the “Dining Room” restaurant where some famous actors and directors have their “favorite” tables – pointed out by your guide.

Parking is $20 for the Studio Tour, but complimentary for VIP Tour guests with tour confirmation email.

For more info & to reserve tickets visit: www.paramount.com There is no direct link to the studio tours, click “enter site” and then choose Studio Tours.