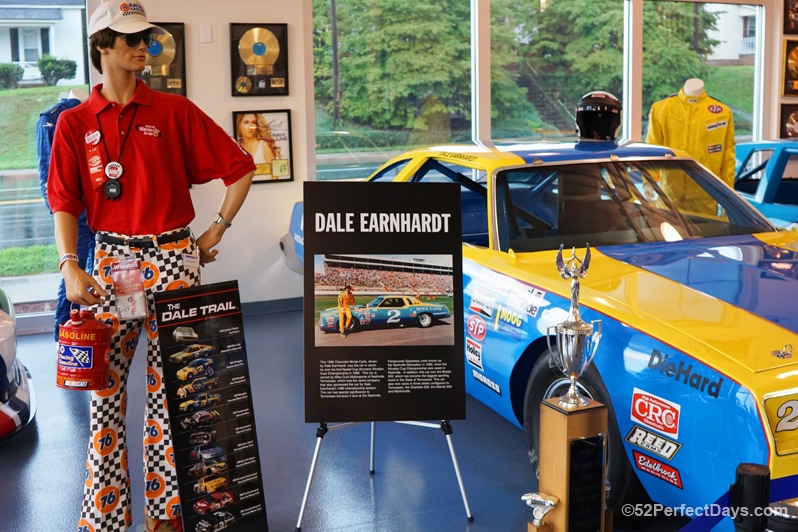 North Carolina is the birthplace of NASCAR and home to 90 percent of race team shops. It is also home to the NASCAR Hall of Fame and has bred some of the sport’s biggest legends such as Dale Earnhardt Sr. and Richard Petty (widely considered the top two NASCAR drivers of all time). Cabarrus County, North Carolina is the epicenter of NASCAR and where you’ll find The Charlotte Motor Speedway, The Dale Trail, Stewart-Hass Racing and the Curb Museum for Music & Motorsports. Ready to explore the NASCAR World of Cabarrus County, North Carolina?

NASCAR is the acronym for National Association for Stock Car Auto Racing and was founded by Bill France Sr. in 1948. Ralph Earnhardt and Lee Petty were two of the first NASCAR drivers and helped put the sport on the map. NASCAR has the longest professional sport season, lasting 10 months and running from February through October. NASCAR and Cabarrus County, North Carolina are intertwined and it’s nearly impossible to talk about one without the other.

When I visited the Charlotte Motor Speedway I was lucky to take a few laps in a NASCAR pace car. Check out the below video! 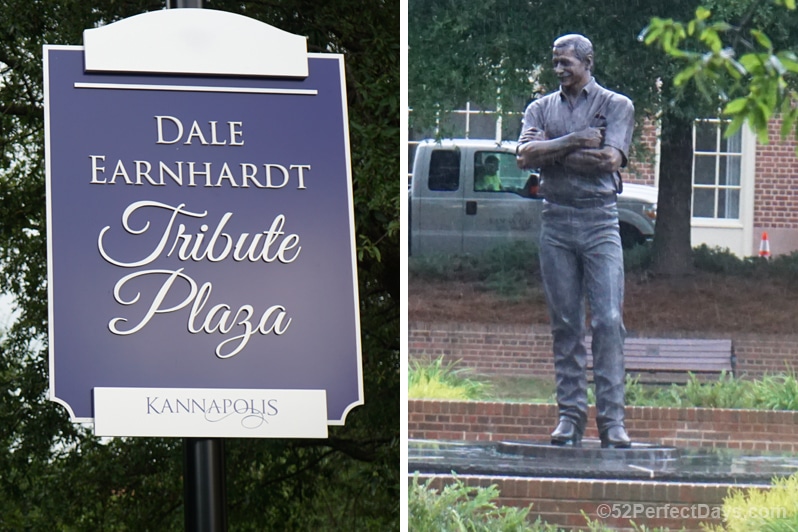 Not far from Charlotte Motor Speedway is the small, quiet Southern town of Kannapolis and the childhood home of the racing legend, Dale Earnhardt.  If you visit Kannapolis, North Carolina you can’t go far without hearing the name Dale Earnhardt. It’s here in Kannapolis, where you will find the 19-stop Self-Guided Tour of NASCAR Legend Dale Earnhardt Sr. With seven NASCAR championships under his belt, Dale Earnhardt Sr. is considered one of the greatest drivers in the sports history. Sadly, the legend passed away during the 2001 Daytona 500 after crashing into the wall on the final lap.

The Dale Trail is a bucket list experience for Dale Earnhardt Sr Fans and the tour lets you explore the sites where Dale Sr. grew up. The tour helps tell the story of his life and his legendary NASCAR career from start to finish as well as how Dale Earnhardt helped put the small town of Kannapolis on the map.

One of the most important stops on the tour is the Dale Earnhardt Tribute Plaza, located on the corner of Main Street and West B Street. The centerpiece of the park is a nine-foot, 900-pound bronze statue of Dale as his hometown knew him — dressed in Wrangler jeans, cowboy boots, and a short-sleeve shirt with sunglasses in the pocket. I was told his mother chose to portray him in street clothes instead of his racing gear was because he was a son longer than a racer.

There is a lot symbolism in the park. For example, the park is shaped like an oval as is a race track and Dale’s gaze is directed toward Idiot Circle (his favorite hangout during his teen years). It is affectionately called Idiot Circle by the locals and is a stretch of road where high school kids hang out on weekends and are known to perfect their left turn driving skills. It’s said that Dale Earnhardt did more laps here than anywhere else.

Other stops on the tour include a visit to Punchy’s Diner, where you can try Dale Earnhardt’s favorite sandwich, a simple tomato sandwich made with lettuce and Miracle Whip on white bread. Another important stop is Hendrick Motorsports, where you will find some of Dale’s race cars, memorabilia and trophies at the museum & team store. 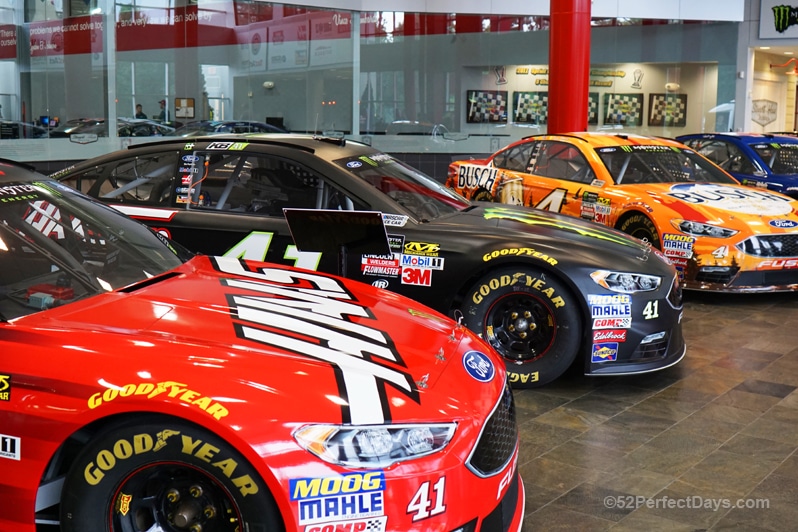 Based in Kannapolis, North Carolina, Stewart-Haas Racing is the title-winning NASCAR team co-owned by three-time Monster Energy NASCAR Cup Series champion Tony Stewart and Gene Haas of Haas Automation. Stewart-Haas Racing is part of the Monster Energy NASCAR Cup Series for drivers Kevin Harvick (#4), Danica Patrick (#10), Clint Bowyer (#14) and Kurt Busch (#41). Stewart-Haas Racing operates out of a 200,000-square-foot facility where visitors can watch mechanics and engineers build the race cars for the team. You can also visit the gift shop and check out their impressive trophy case.

Curb Museum for Music and Motorsports is a museum about music and NASCAR racing. Both museums are housed in the same building and at first you might think it’s an odd combination, but you’ll quickly find that the owner, Mike Curb is a huge fan of music and NASCAR. 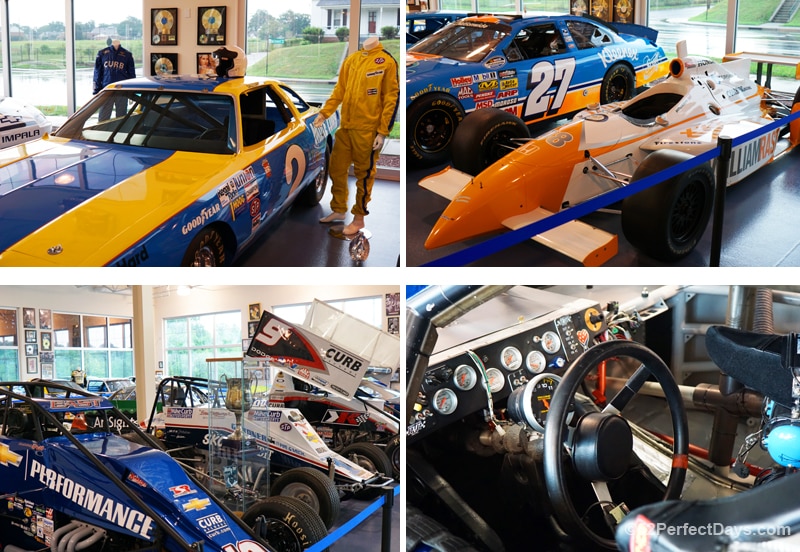 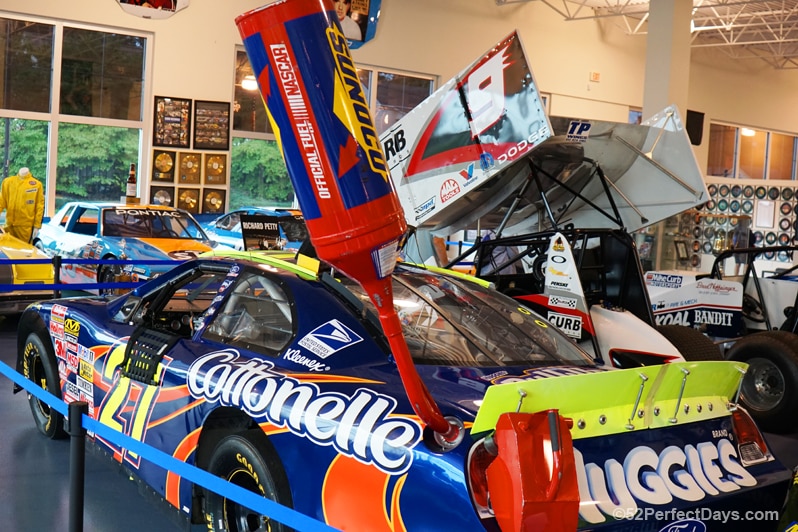 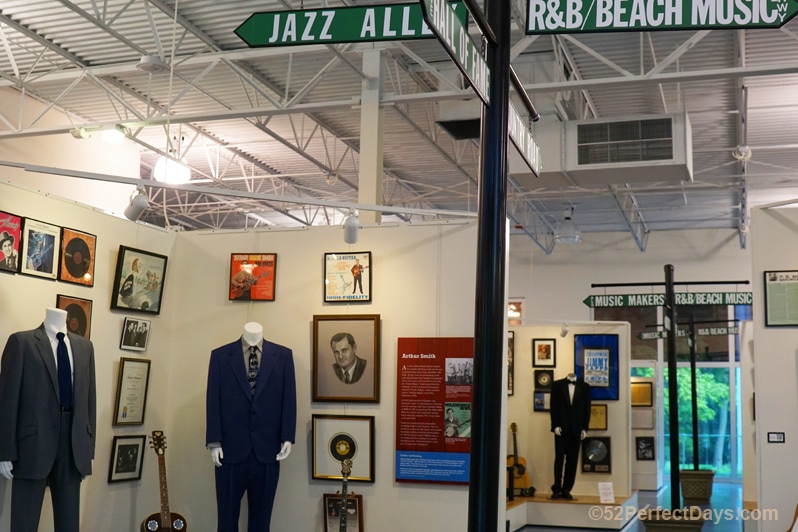 The NASCAR Hall of Fame honors the history and heritage of NASCAR and was designed to educate and entertain race fans and non-fans alike. It features artifacts, hands-on exhibits and just about anything a NASCAR fan would want to learn about.

For the Petty family, every day is race day. Discover more stories about the four generations of Pettys at our special, limited-time exhibit PETTY: Building a Family Legacy, open through the end of July. #NASCAR #NASCARHall #NASCARHOF 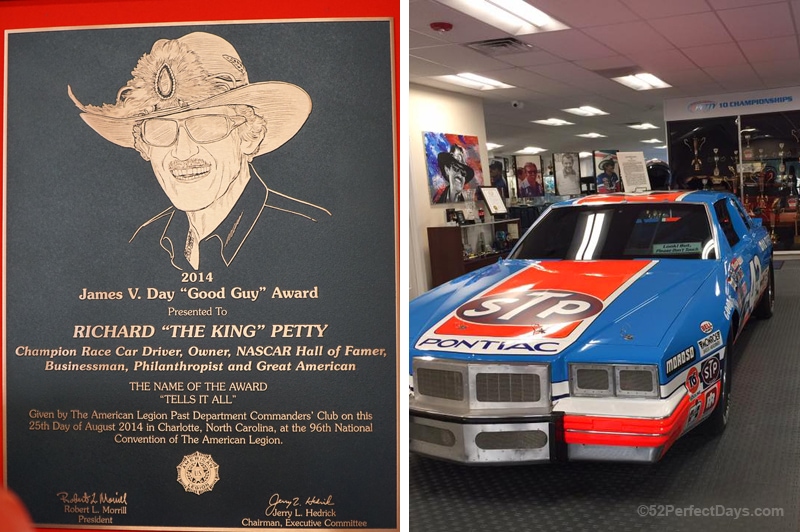 Richard Petty is considered the most successful driver in NASCAR history, winning a record 200 races. The Petty’s are a four-generation North Carolina NASCAR dynasty. Richard Petty is considered the King of stock car racing because he was the best driver almost every single time he entered a race. He has 237 more Top-10 finishes than Jeff Gordon, who is in 2nd place, and he is 219 Top-5 finishes ahead of Bobby Allison, who is holding down 2nd place on that list. 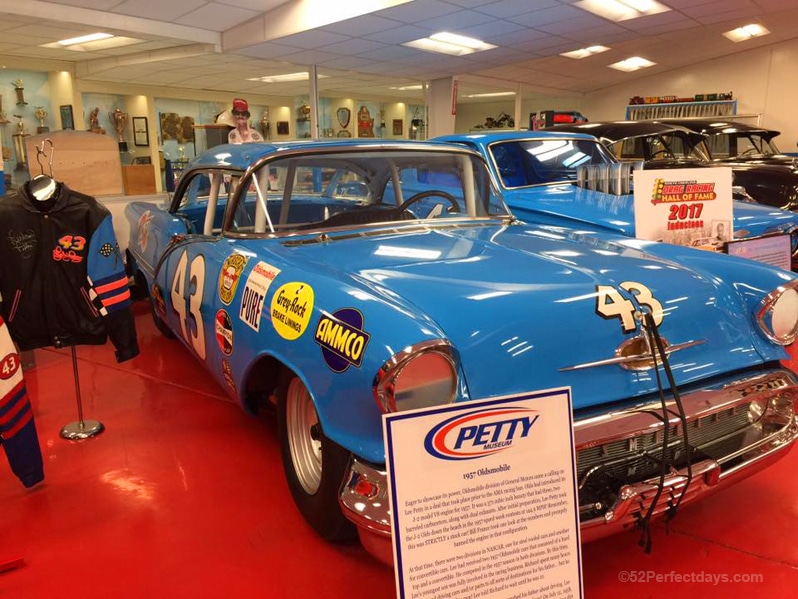 Richard Petty Museum, located in Level Cross, North Carolina in Randolph County, is considered one of the most historic places in motorsports.  The museum is located where Richards father, Lee Petty first began tinkering with cars in 1949 and where Petty Engineering was born. A visit to the museum allows you to walk the historic grounds where it all began and the buildings are as much the story as the cars, trophies or helmets on display.  The museum showcases Petty Family history as well as the history of NASCAR.  You’ll find race cars, memorabilia, photos, trophy’s as well as Richard’s extensive collection of firearms, pocket watches, awards, honors, and personal NASCAR memorabilia.

The above depicts only a small part of the NASCAR World of Cabarrus County and North Carolina and all are integral to the history of NASCAR. If you are a stock car racing fan, you can’t go wrong taking a road-trip or detour to the place “Where Racing Lives”.

The best time to visit is in the shoulder seasons; from March through May or from September through November, when it is less crowded and hotels are less expensive.

Traveling To North Carolina Soon? Here are a few tips:

How to get there: Cabarrus County is located in the south-central part of the U.S. state of North Carolina. The closest airport is Charlotte Douglas International Airport (CLT) and it’s a 40-minute drive to Cabarrus County.

Where to stay: Concord is a great central spot for a visit to Cabarrus County. I recommend Embassy Suites by Hilton Charlotte Concord Golf Resort & Spa. It’s located just minutes from the Charlotte Motor Speedway and about 20-minutes to Kannapolis where you will find the Dale Trail, Stewart-Haas Racing and Curb Museum for Music & Motorsports. The hotel rate includes a buffet breakfast and a daily manager’s cocktail reception. I suggest checking HotelsCombined for the best hotel rates for Hilton Charlotte Concord Golf Resort & Spa.

What to pack: The temperatures each season vary greatly. In winter you’ll see occasional snow with low’s in January of 29 °F and a high of 52 °F. I visited in August and the high was 94 °F and low 62 °F. You’ll also find rain in the summer months. I was very happy I brought along a travel umbrella, as we had several days with spurts of rain. If you are visiting in Winter, you’ll want to bring fleece lined leggings, a light down jacket, warm socks (I love Ice Breaker), a waterproof outer layer and rain jacket, and some hiking boots (I love Keen).

Indispensable Items to Bring to a NASCAR Race