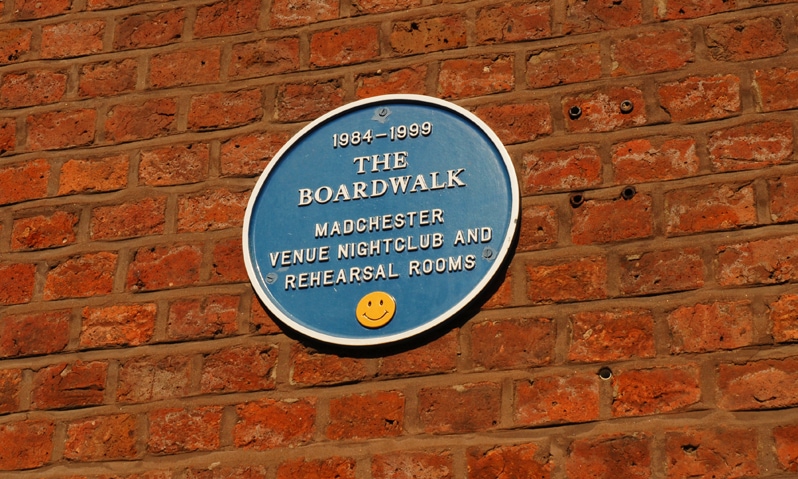 The Manchester music scene was huge in the late 70’s and 1980’s. Bands like the The Smiths, Joy Division, Oasis, The Stone Roses and New Order all hailed from Manchester and helped put in on the musical map worldwide.  Manchester Music Tours: Music Themed Bus & Walking Tours explores the legendary Manchester music scene in it’s heyday as well as celebrating newer musicians such as James, Elbow and The Courteeners.

What makes the tours interesting is the founder and guide, Craig Gill. Craig is the drummer for Inspiral Carpets. They are an alternative rock band with 12 top forty UK hits and 3 top ten albums that came to prominence, alongside bands The Stone Roses and Happy Mondays, in the ‘Madchester‘ scene of the late 1980’s.

Craig offers several tours including ones that solely focus on Oasis, The Smiths and Joy Division among others. The tour I participated in is the Manchester Music Walk. Put on some comfy shoes and be ready to keep up, because Craig’s tour is a fast paced walk through the musical history of Manchester. Craig Gill is drummer for the Inspiral Carpets and founder of Manchester Music Tours.

are touring and recording and have a new album.

The tour lasts about two hours and Craig shares history about Manchester and and it’s musical evolution.

Craig has been in the Manchester music scene for over 30 years and knew most if not all of the members of the bands who catapulted to fame in the 1980’s. This offers him a unique point of view and during the tour he shares his personal history in the 80’s Madchester scene and stories such as how the Sex Pistols changed everything in music with one show.

Craig tells the story about when the Buzcocks’s traveled to London to meet the guys from the Sex Pistols and invited them to play in Manchester. The Lesser Hall show in June of 1976 is said to be one of the most important gigs of all time, and has been featured in the films 24 Hour Party People

. Craig said that the story is that only 40 (The Famous 40) showed up, including Howard Devoto and Pete Shelley from the Buzzcocks as well as Morrissey who formed The Smiths, Tony Wilson from Factory Records and The Haçienda owner, Peter Hook and Bernard Sumner from Joy Division and New Order, Mark E Smith from The Fall.

Craig shared the importance of the show which was that all those mentioned except the Buzzcocks were not in bands at the time. It is said that all those who attended who were not in a band went out the next day and bought and instrument and started a band. This was the true beginnings of the Manchester music scene.

During the tour we visited locations of famous gigs and concerts such as Free Trade Hall and The G-Mex Centre. Our tour took us to the Boardwalk Club, which was once the rehearsal spot for the Happy Mondays, Inspiral Carpets, Purescense and Oasis. The Boardwalk Club is also where Oasis played their first gig. It has now been converted to apartments, and no longer a club, but it was still fun to hear the stories.

Manchester has produced more rock and pop stars per capita of population than other city around the world.

It was outside of the Boardwalk Club building that Craig told me that Noel Gallagher of Oasis fame auditioned for Inspiral Carpet in 1988 but didn’t make the cut. He was hired on as their roadie and toured with with band as an employee.

Next we headed to the building that was once the Hacienda club. The club has been turned into flats but the building bears the same name as the legendary club and even a plaque for the performer James. Head behind the Haçienda building to find the real treasure. If you head down Rochdale Canal you’ll find a timeline detailing all the famous events and bands associated with the Hacienda. Below are a few pieces of the art created by the artist Stewy focusing on the musicians who played the Hacienda Nightclub. Other spots visited on the tour include Factory Records headquarters which is now Fac251 nightclub owned by Joy Division and New Orders Peter Hook. Another stop on the tour is The Ritz which is the longest continuously running club and the scene of the Smiths first gig. There is also a walk by India House, the flats where Noel Gallagher use to live and the inspiration for Definitely Maybe and Whats the Story LP.

Also on the tour is a walk by Dry 21, a long-standing bar opened by Factory Records’ Tony Wilson, with self-contained basement music venue. It was used in the filming of 24 hour party people and it’s said that Shaun Ryder and Liam Gallagher are still barred from the venue.

Craig is a wealth of Manchester music knowledge and this tour is a must for music fans. Craig does a great job weaving his own personal music story into the larger Manchester music narrative as well as adding fun facts and history about the city itself.

What is your favorite music town? Where have you taken a music tour? Share your stories in the comments!

A big thank you to Craig for sharing his personal musical journey with me. I was a guest of Craig’s on this tour, but as always, all opinions are my own.

This post contains affiliate links, which means that if you click on some of the links in this post and purchase something, I might receive a commission. This is a good thing! There is no additional cost to you and I make a tiny bit of money to keep this website alive!