It’s a unique national park and is flourishing as a modern-day multi-functional public space. It is also home to the Lodge at the Presidio, a newly renovated historic hotel with amazing views of the Golden Gate Bridge.

TABLE OF CONTENTS show
A Day in The Presidio – San Francisco + Hotel Review
Top 15 Things to do in The Presidio
1. Visit The Presidio Officers’ Club
2. Go on a treasure hunt for all 3 Goldsworthy Sculptures
3. Best Photo Opp of the Golden Gate Bridge
4. Walt Disney Museum
5. Golf at the Presidio
6. Head to Inspiration Point
7. Visit Baker Beach
8. Take a Hike
9. Plan a Sunday visit to Presidio Picnic
10. Plan a Camping Trip
11. Take a Bike Ride
12. Check Out the National Cemetery Overlook
13. Go Bowling!
14. Visit the Presidio Restaurants
15. Stay at Lodge at The Presidio
When to Visit the Presidio
Presidio History

A Day in The Presidio – San Francisco + Hotel Review

There is an abundance of options to tick off the ‘to do’ list, including free public events, an 18-hole public golf course, and a visit to San Francisco’s most historic building, the Presidio Officers’ Club.

In 2015 National Geographic Traveler’s magazine named The Presidio as a top travel destination on its “Best of the World” list. After a visit, I completely agree! It’s truly a hidden gem and I have 15 reasons you should visit as well as a hotel that is a must!

Top 15 Things to do in The Presidio

This is San Francisco’s most historic building and has one of the oldest walls in the city.  Built in 1776, the club used to be a place for army folk and their families to gather.  Since 2014 it has been open to the public as a museum and cultural center. 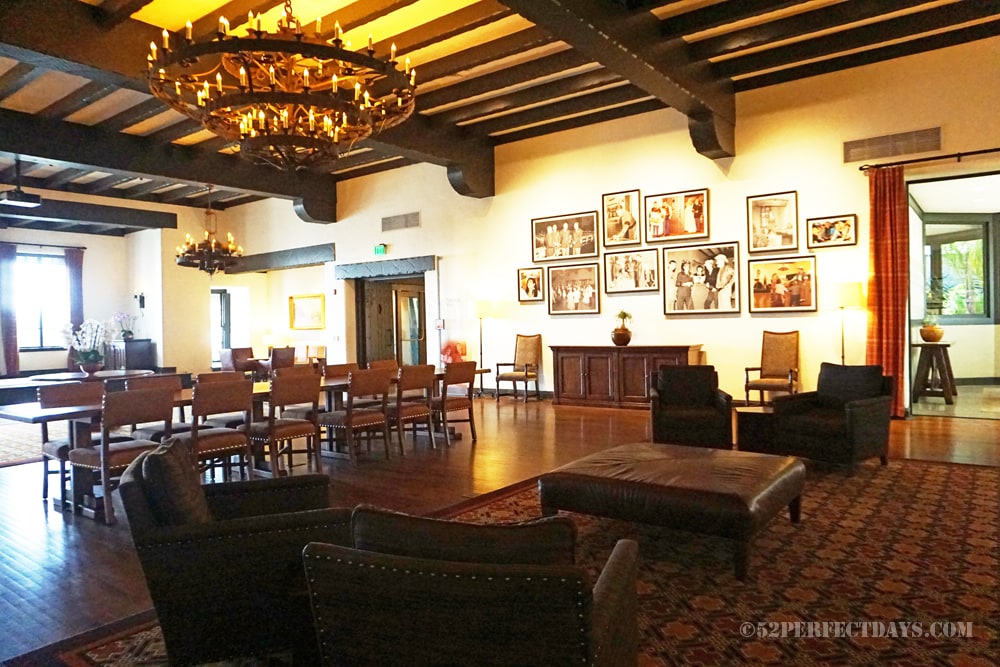 2. Go on a treasure hunt for all 3 Goldsworthy Sculptures

Andy Goldsworthy, a British artist who works with natural materials, created these installations using trees felled from the Presidio’s reforestation. 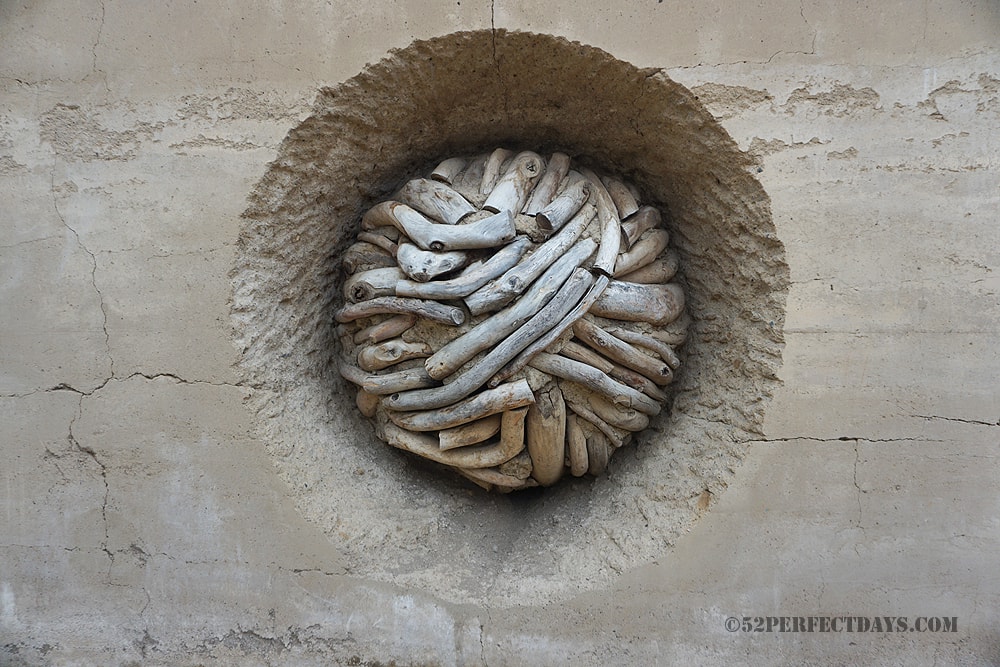 If you’re looking for the best photo op of the Golden Gate Bridge, head to Battery East or Golden Gate overlook.

Battery East Visa is reachable by foot or bike via the Presidio Promenade, Battery East and Bay trails.  If you prefer to drive, there is a paid parking lot nearby, and both the PresidiGo Shuttle and MUNI both stop at the Golden Gate Bridge Welcome Center. 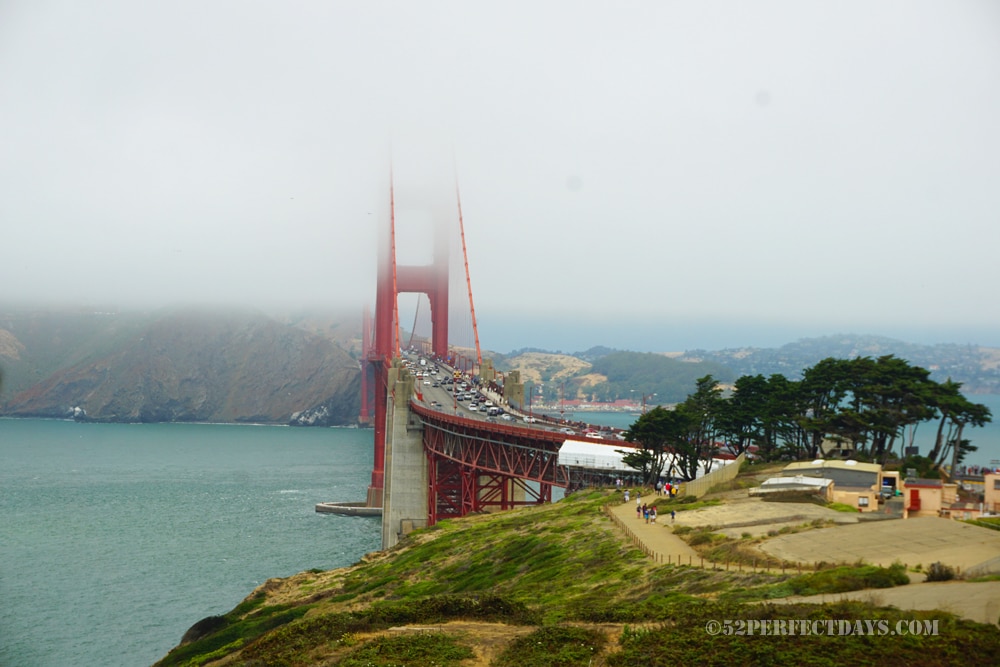 The Walt Disney Family Museum features the life and legacy of Walt Disney. 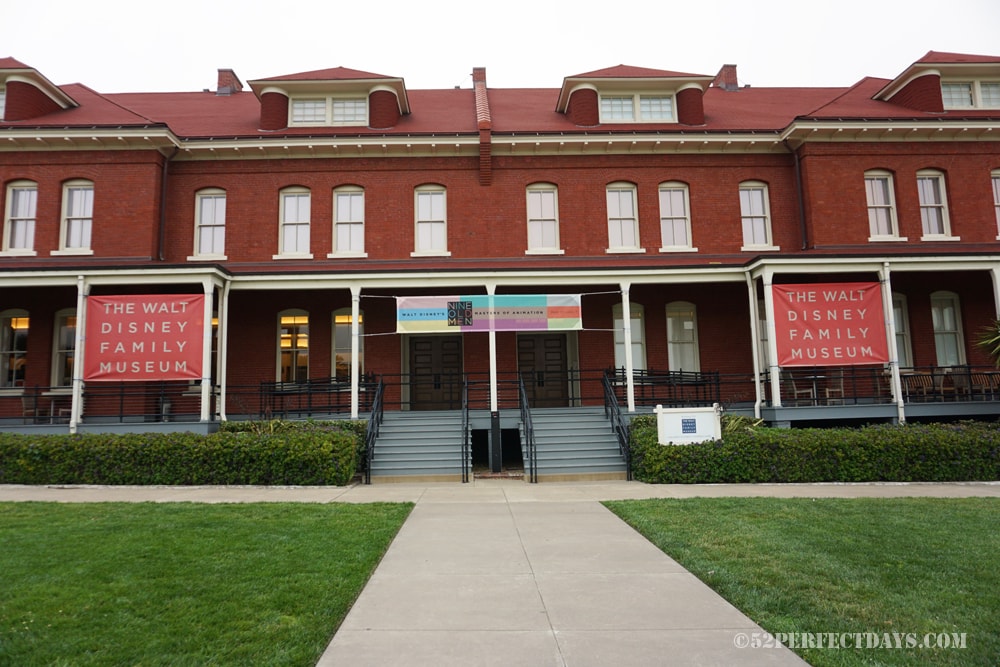 This museum is fascinating. You’ll have a chance to learn how Walt Disney created his legacy, began drawing cartoons and ventured into the feature film world.

The museum is located in The Presidio of San Francisco (part of the Golden Gate National Recreation Area). There is an amazing amount of photos, videos, and cartoon clips, movie clips, interactive displays. You’ll be enthralled by this magical man’s story for hours. 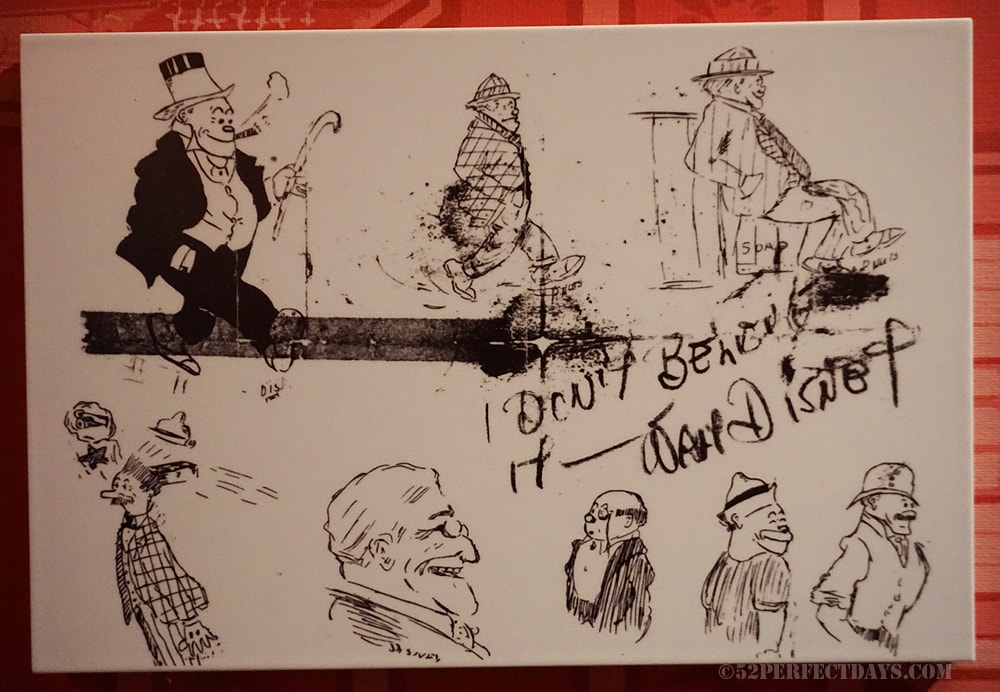 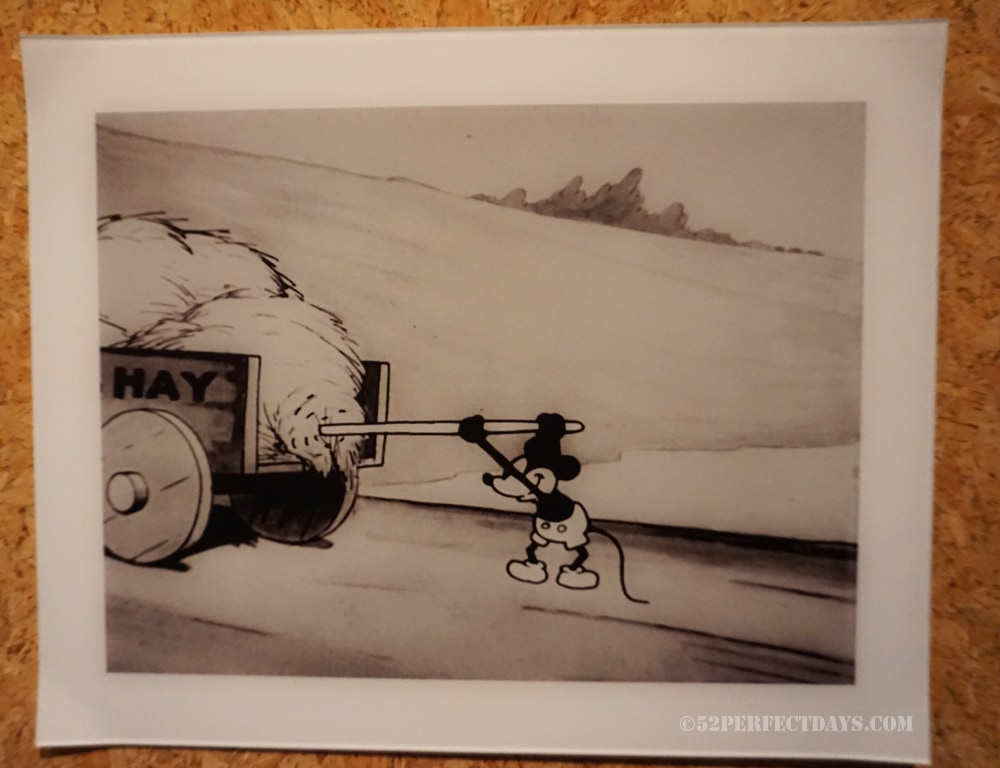 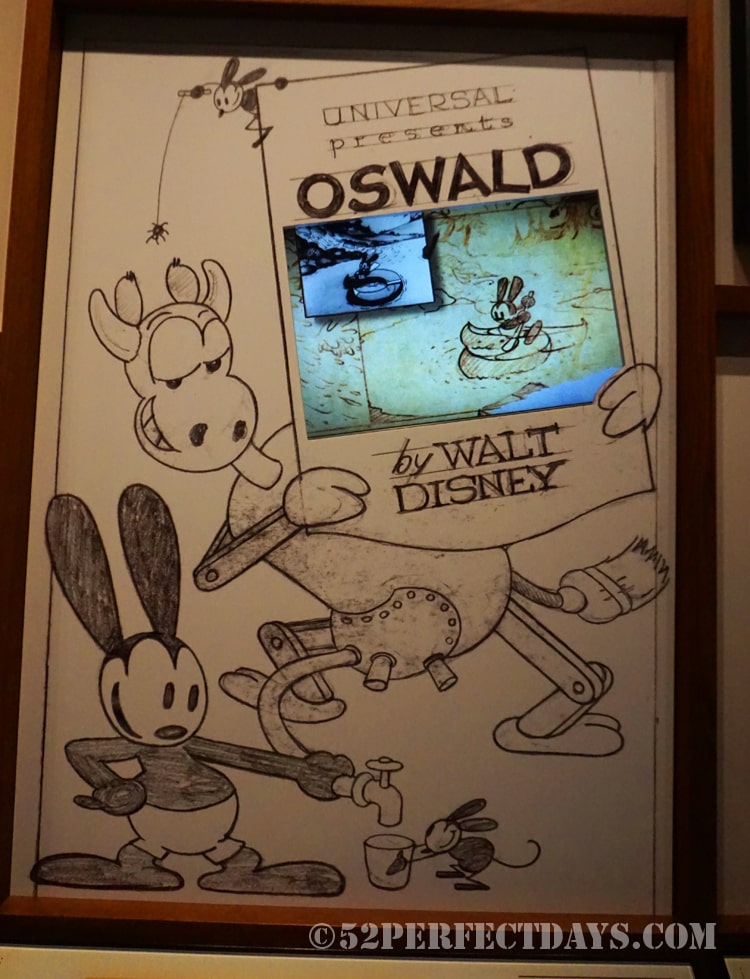 5. Golf at the Presidio

Built in 1895 when greens fees were only 50 cents, the Presidio Golf Course is a national historic landmark.  Its rolling greens have seen more action than many courses.  In 1906 after the earthquake, the course was used as a refugee camp for survivors.

The Presidio Golf Course has made waves in sustainability as well, using compost tea to maintain the grounds, which has reduced the course’s pesticide use by 50%.  Once exclusively available to military officers and private members, it has since hosted the likes of Joe DiMaggio, Babe Ruth, and Bing Crosby and today is open to the public.

If the outdoors are calling your name, Inspiration Point which oversees San Fran Bay, Alcatraz, and Angel Island is a must see. 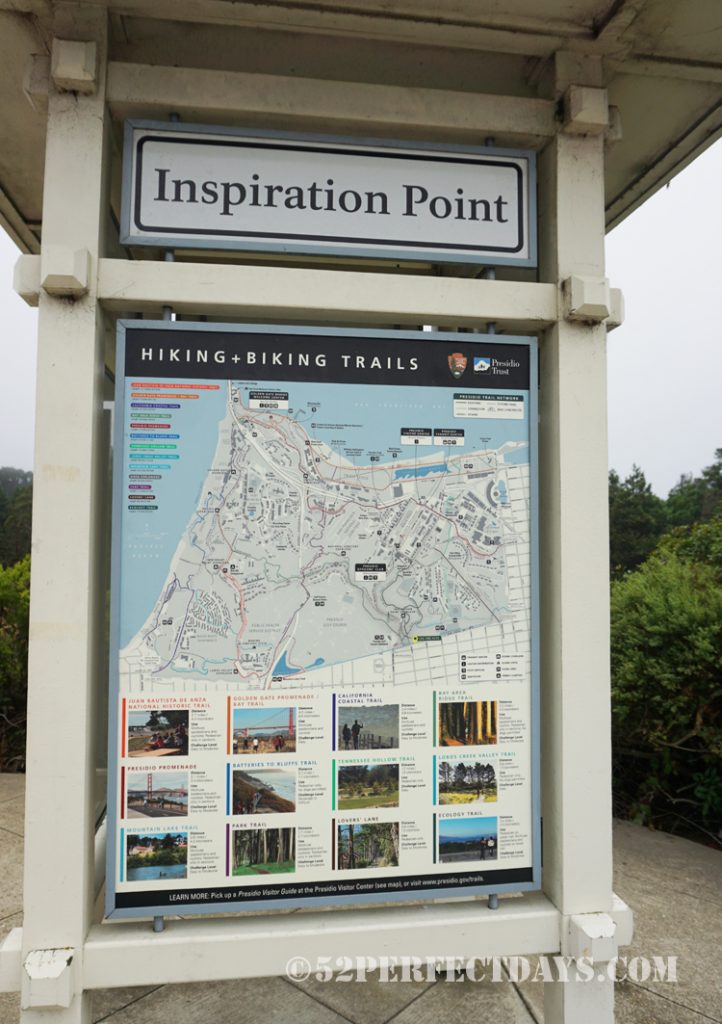 It is the starting point for many hiking and biking trails, but also offers a wonderful view (even on a foggy summer day). 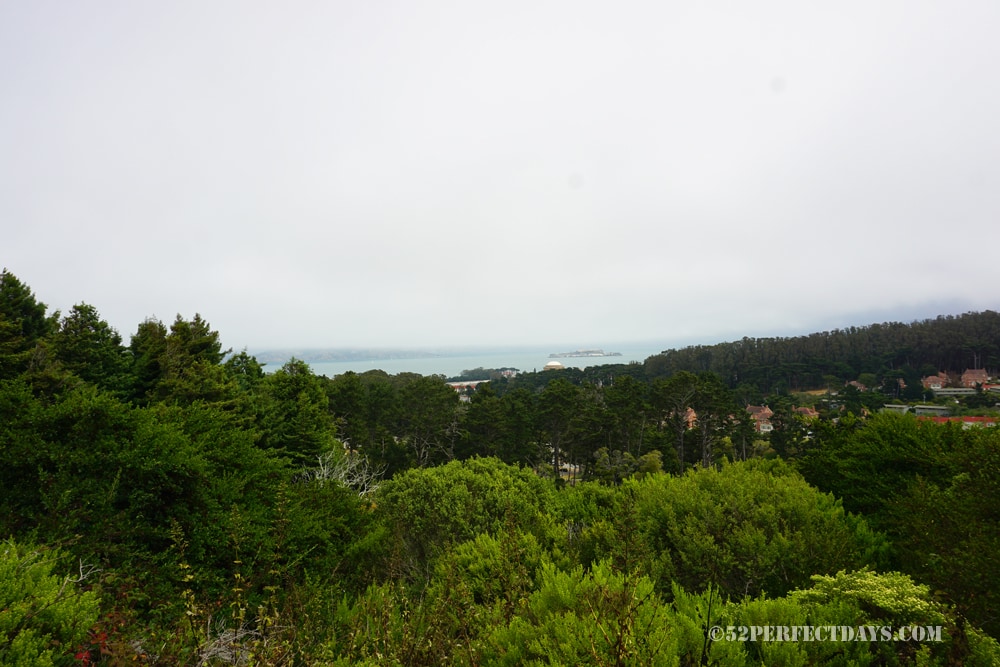 Baker Beach is a fun place to fish or take in the views of the Gold Gate Bridge.  Beware of strong undertows and rip currents.  This is not a beach for swimming.

There are picnic tables with grills and restrooms available if you’re looking for an afternoon outside.  The northern end of the beach is where to head for clothing-optional sunbathing. 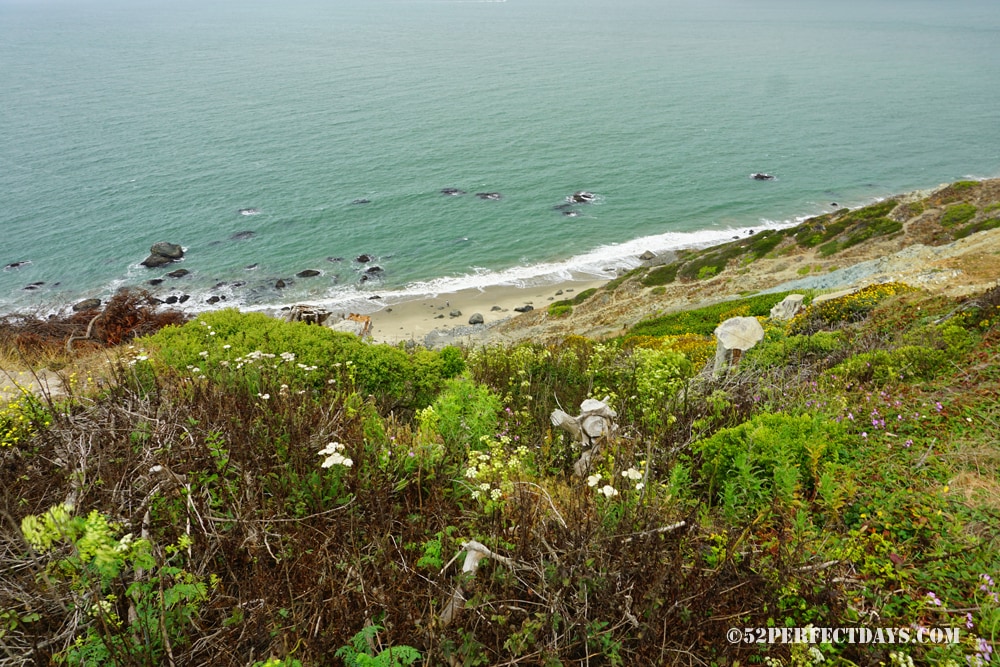 Hiking is an excellent way to enjoy San Francisco’s Presidio National Park, from the Batteries to Bluff trail that leads to the Golden Gate Bridge, to the Juan Bautista de Anza National Historic Trail, there are no shortage of options to explore the area.  Visit www.presidio.gov/trails for more information. 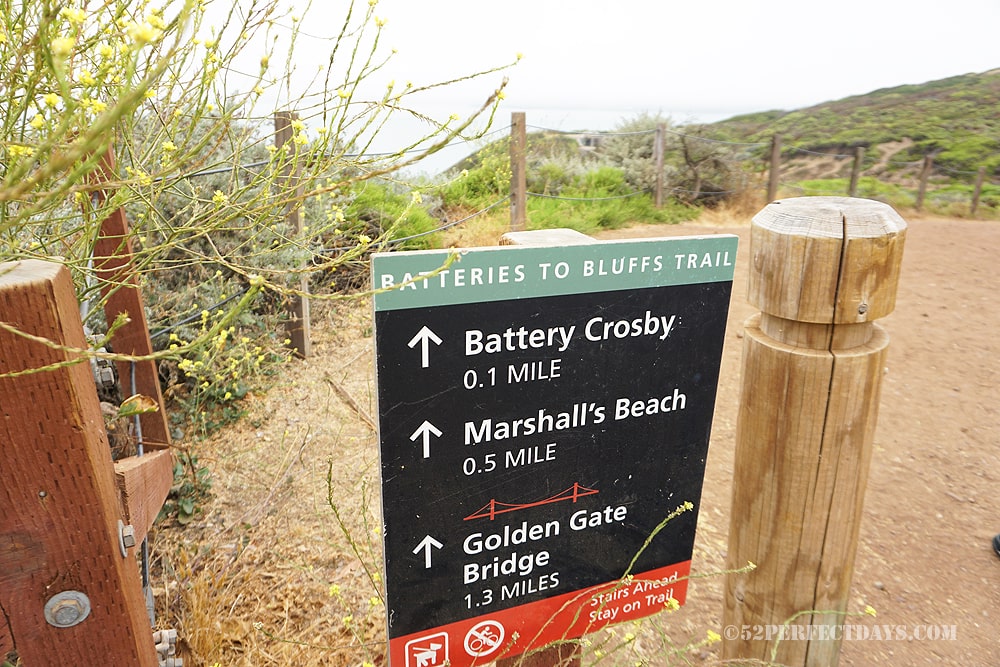 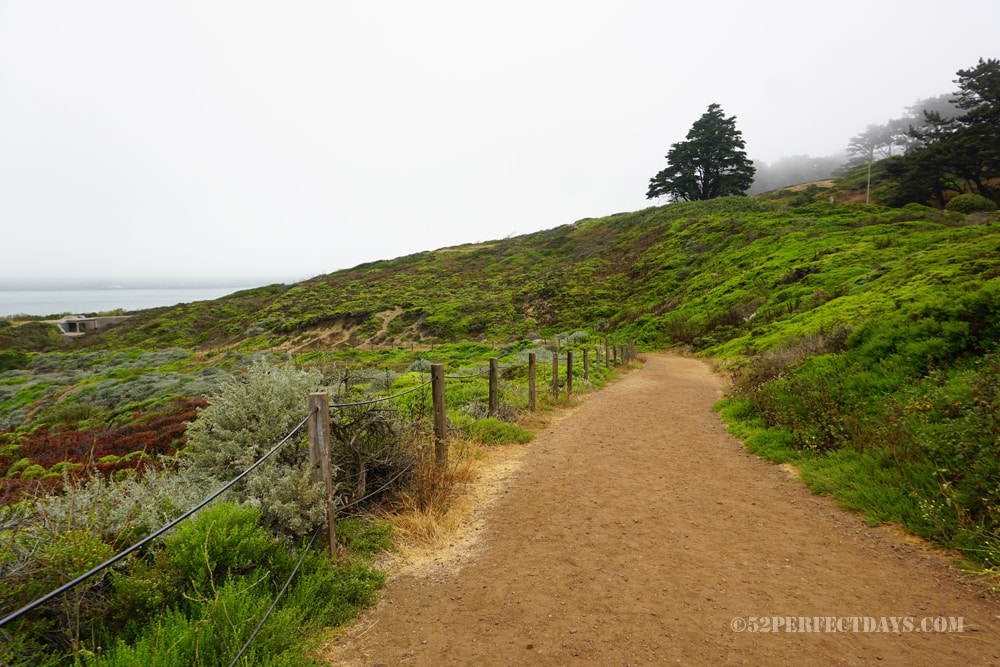 Any foodie visiting Presidio needs to schedule a Sunday visit to Presidio Picnic to indulge in 25 international food truck vendors’ creations.  Need to work up an appetite first?  From 11am to 12 pm there is a free public yoga class.  Presidio Y Bike offers learn to ride lessons on the first Sunday of each month, with both bikes and helmets provided.

Love to camp? Robb Hill is the only campground in the city of San Francisco. The campground sits on four wooded acres above Baker Beach near the Presidio’s highest point. One of the most beautiful places to camp in California!

The Presidio features more than 24 miles of trails, 25 miles of bikeways, and eight scenic overlooks, including views of the Golden Gate Bridge. But, Crissy Field Trail is the most known and is in fact, the most walked trail in the United States.

Cyclists and families can use free bikes while staying at The Lodge at Presidio.  It’s an excellent way to explore the area close by or to get out on the trails as well. 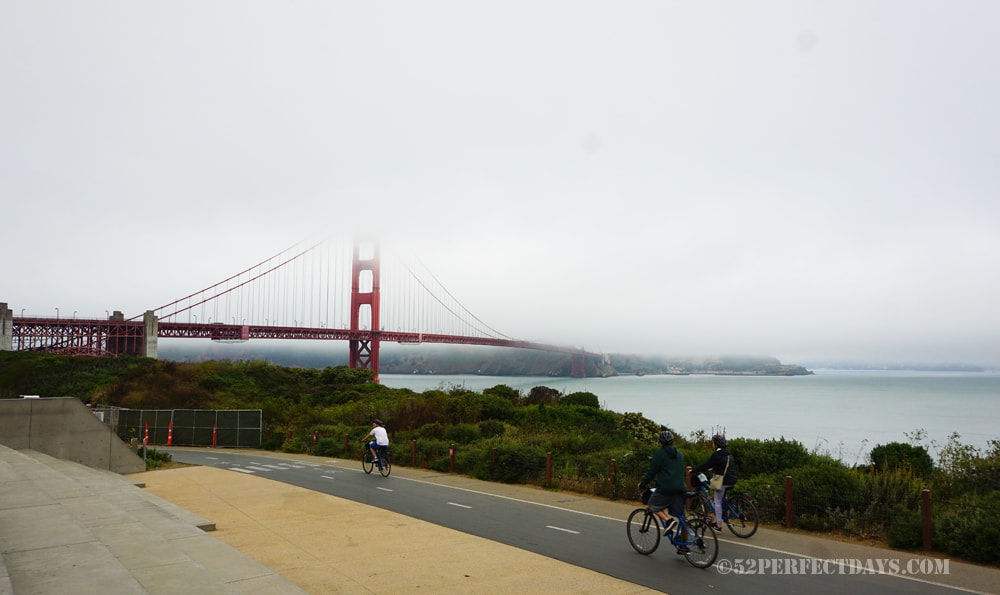 12. Check Out the National Cemetery Overlook

Presidio’s stunning forest is home to the National Cemetery Overlook with a view of the 28-acre military cemetery and the American soldiers laid to rest there.  If you’re in the area over Memorial Day, it’s one of the biggest celebration locations on the west coast.

Bowling just got an upgrade with Presidio’s Glow in the Park bowling nights.  Every Friday and Saturday from 10 pm until 2 am and Sundays from 9pm until midnight, you’ll want to join in for the music video and light show.  The Presidio Bowling Center is equipped for small groups or corporate events up to 200 people strong.  Bumper lanes are available, as is a tasty bar and grill, and a fully stocked bar of over 50 beers and 19 wines.  To book lanes, visit https://presidiobowl.com/.

Visit the Presidio restaurants. What trip would be complete without a gourmet feast?  There are many great restaurants to enjoy in the Presidio.  We had a great meal of delicious Spanish-influenced food with a California twist at The Commissary! 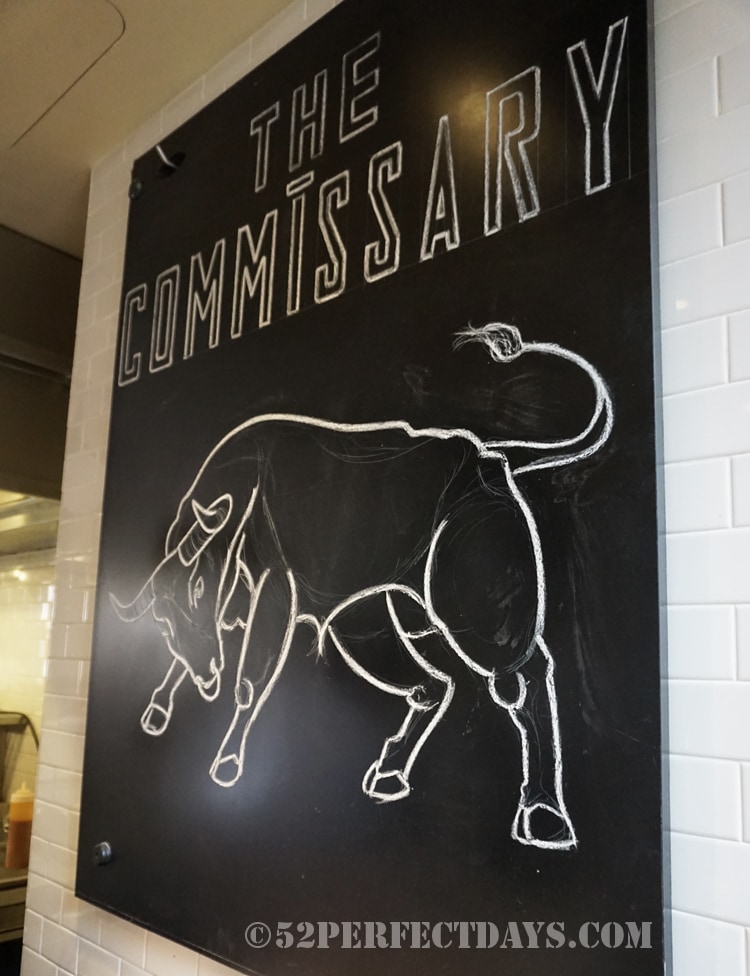 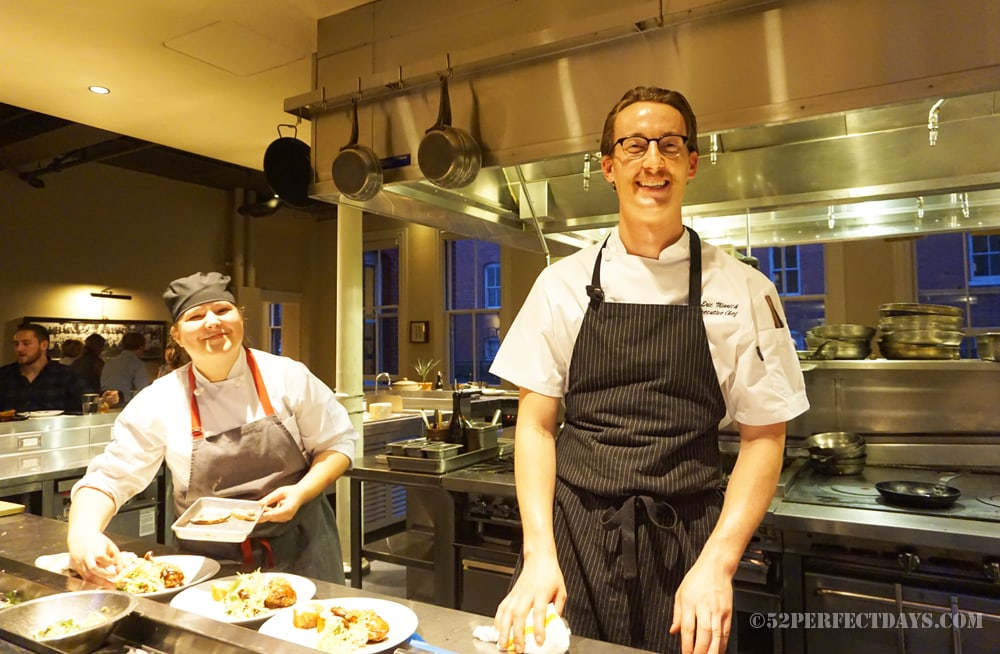 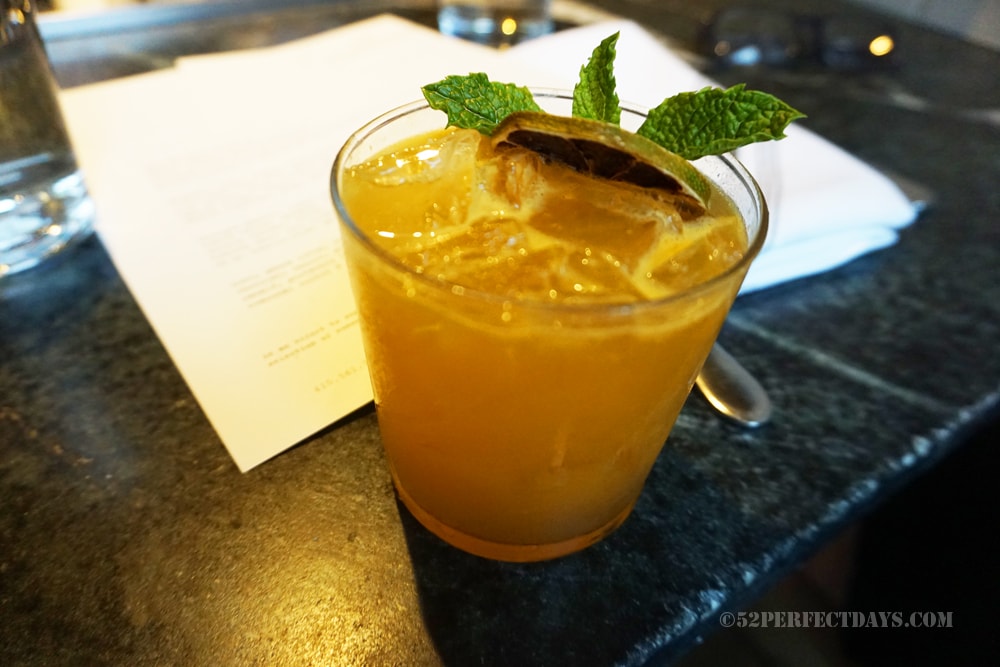 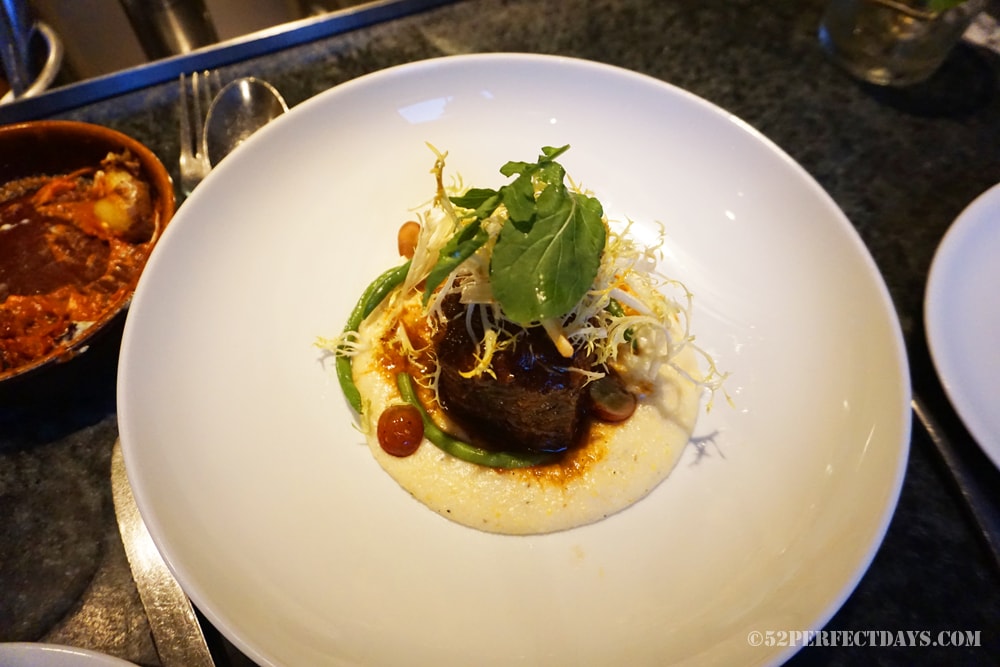 15. Stay at Lodge at The Presidio

We stayed at the luxurious Lodge at the Presidio, newly opened to the public in June of 2018. The lodge is located in what was once a military base and is a sister hotel to the award-winning Inn at the Presidio.  The rooms are large with amazing views of the Golden Gate Bridge and the San Francisco area.

The Lodge at the Presidio is a handsome 3-story bed and breakfast with 42 rooms throughout five former army barracks built in the 1890s.

The interior was meticulously decorated by Julie Coyle Art Associates and pays homage to its past with historic photographs, found objects, and watercolor paintings by local artist Lynn Sondag.

In accordance with the US Green Building Council’s LEED standards, the Lodge at the Presidio is also a state-of-the-art example of an energy-efficient transformation.

Located on the 7-acre Main Post public greens, the Lodge is in the center of everything you’ll want access to and easy walking distance to hiking and biking trails, the beaches at Crissy Field, Presidio Golf Course, restaurants, and even the Walt Disney Family Museum.

Breakfast is complimentary with generous options including breads and pastries, yogurt, fresh fruit, cereal, meats, cheese as well as juice, coffee, and tea.

In the afternoon, the Lodge hosts a delicious wine and cheese hour in the dining lounge with a variety of cheeses, bread, crackers, nuts, and treats.

Outside the Lodge, there is a welcoming front porch complete with rocking chairs to relax in.  In the evenings, you can enjoy a fire against a backdrop of the Golden Gate Bridge.  If you’re looking to venture around The Presidio, the Lodge offers complimentary bike use.

There were several features of the Lodge that I loved from the slippers, seersucker robes, extra soft and fluffy towels, and umbrellas available in the guest rooms. The guest rooms themselves are quite spacious.

I also loved the exposed beams and wall art that made me feel like I was in the nearby forest. It felt as though beams of sunshine were alive in art in our room.

Though the Lodge at the Presidio is part of the National Park, the area really feels like it’s its own miniature city.  It is true when they claim they have the most spectacular views in all of San Francisco. The view of the Gold Gate Bridge alone is truly unparalleled.

For additional great San Francisco hotels with wonderful views, there are plenty amazing one’s to choose from.

When to Visit the Presidio

I visited The Presidio in late July when the low was 58 and the high was 71. Be sure to bring a jacket or dress in layers on your travels as it can get cold with the fog and wind!

There are an abundance of choices when visiting San Francisco, but I suggest heading a bit off the beaten path to discover this wonderful part of the city.

Native Americans have called northern California region home for nearly 10,000 years. Archaeologists have located a shell mound in the Crissy Field area that dates back to A.D. 740. Important archaeological investigations continue in the Presidio to better understand this period. Today, descendants of the Ohlone/Costanoan people live throughout the Bay Area.

From 1776 to 1821, the Presidio was the Spanish empire’s northernmost military outpost and guarded California’s largest harbor from occupation by other European powers including Russia and Britain.

In 1821, Mexico declared its independence from Spain & Presidio changed from Spanish to Mexican sovereignty.

In 1847, during the Mexican-American War that was triggered by a border dispute in Texas, the 1st New York Volunteer Regiment occupied the crumbling adobes at the Presidio. The U.S. Regular Army took over the post the following year.

In 1998 a federal agency was created to restore the Presidio as a national park.  The Presidio Trust (Trust) is a self-sustaining area that generates income by restoring and renting out its historic buildings.

There is much more to the history of the Presidio and it’s truly a fascinating story! If you want to explore more national parks near San Francisco, there are more than a dozen within an easy drive.