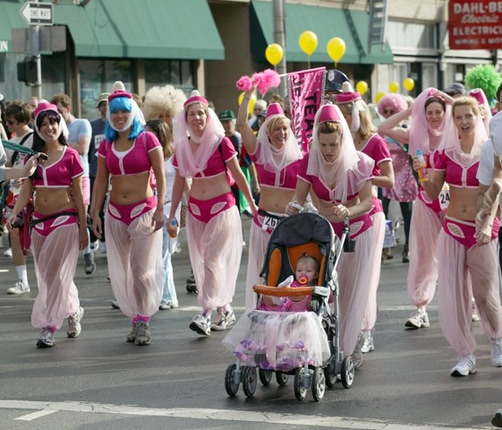 There’s something different about San Francisco, and I’m not just talking about its Victorian architecture, its cable cars or the fact that the Golden Gate Bridge is painted orange. If anything, these are the end results of something that runs much deeper through the city’s seven by seven-mile area: its eccentric spirit.

In San Francisco, the unusual is treated as the norm: it is embraced and encouraged so that the city is a livewire of creativity and freedom of expression. Why is this eccentricity present here more than any other nearby city such as Portland, Vancouver or Los Angeles? The answer may lie in the city’s history as an enabler of change. Whether it was the gold rush, the flower power years, or the dotcom boom, this historical acceptance of the new-made it more receptive to the unconventional. This in turn attracted a certain breed of people, and so the cycle continued. 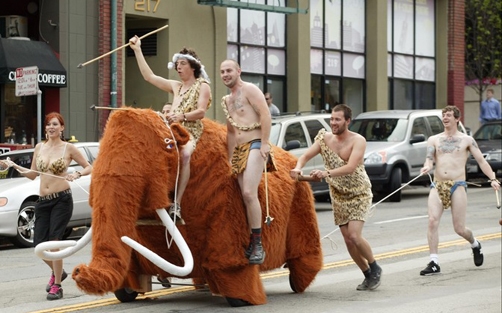 Defining San Francisco’s eccentric spirit can be difficult to do, but evidence of it is easy to find. Nowhere is this more apparent than at a handful of unique events that take place in the city throughout the year. Often, the best part about these is watching the blasé San Franciscans observing from the sidelines with a nonchalant “I’ve seen it all” expression on their faces. For every San Franciscan that stands by and watches though, there are ten more that live for these opportunities to participate in performance art, sing, dance, dress up, or simply walk naked in the street.

This article doesn’t share how to spend one perfect day in San Francisco but instead six whacky ways to have fun in the city by the bay. Whatever type you are, embrace your inner kook at the following quirky events: 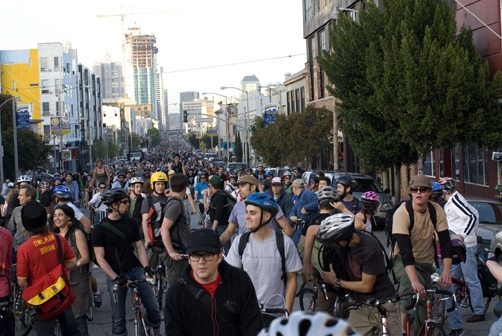 Although organized bike rides are nothing new, the concept of a bike ride as a social movement first began in San Francisco in 1992. Back then, a few dozen cyclists took to the streets to raise awareness of how unfriendly the city was to cyclists. Seventeen years later, it’s grown into a major event that is a worldwide phenomenon in cities around the globe. These days in San Francisco, the purpose of Critical Mass is less clear, and there is no specific leader. Nevertheless, San Franciscans need little encouragement to cause a little chaos, and each month sees around a thousand cyclists take to the streets during rush hour, much to the consternation of motorists and pedestrians.

Participants range from serious bikers, to curious residents, to costume-clad troublemakers. Critical Mass insists that these are “spontaneous gatherings” and not protests, although in reality, during the event you can often cut the tension between motorists and cyclists with a knife. However you feel about it, be sure to witness it at least once – just make sure you’re not in a hurry to get somewhere.

Held annually on the third Sunday of May, the Bay to Breakers seven-mile race is so named because it starts at the Embarcadero on the Bay, and ends at Ocean Beach overlooking the Breakers. This is no ordinary running race though: while a small minority of people take it seriously by running the course, the vast majority of participants walk it in costume while dragging a beer keg float disguised as anything from Greek mythological ships to Cadillacs.

Bay to Breakers is a day of craziness, when city officials look the other way as participants dance, sing, create spectacles of themselves, go naked, and drink while they walk. This year, authorities have threatened to crack down on the festivities, banning drinking and nakedness, and requiring participants to register their floats. The question is, will San Franciscans comply? Knowing their historical disdain for authority and their penchant for non-conformism, I won’t be holding my breath.

A spooky ghost walking tour through Nob Hill and Union Square. Discover haunted hotels, streets, clubs, and office buildings. Learn about the ancient secrets of the Sutter building and the devastation that followed the 1906 earthquake. Learn more about the tour!

Embracing all things granola, Park(ing) Day is a yearly initiative that was started three years ago by REBAR, a local art, and design collective. On one day each year, artists, activists and anyone else who feels creative temporarily turn San Francisco’s public parking spaces into mini public parks. What people do with the spaces is completely up to them, with the only common theme being green grass. Some lay down ready-made lawn and recline in deck chairs, while others turn exercise bikes into smoothie machines alongside bales of hay, as a way of highlighting the benefits of sustainable energy.

According to John Bela, one of the three founders, the event attempts to reclaim the city’s streets for its people. When you consider that seventy percent of San Francisco’s downtown area is taken up by parking spaces, this starts to make sense. It’s obviously more difficult than usual to find parking on the day of the event, but luckily, most motorists see the funny side. Authorities stand back too – as long as occupants keep feeding the parking meters, of course. 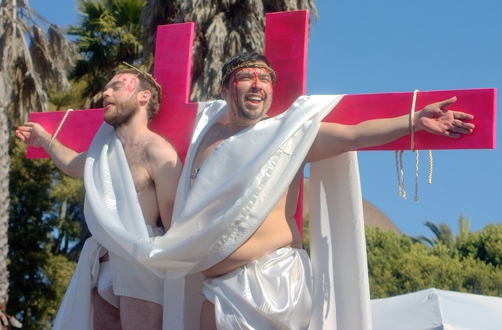 Every Easter Sunday in the Mission’s Delores Park, a gay charity group called the Sisters of Perpetual Indulgence holds a contest for the hunkiest Jesus lookalike among a group of scantily-clad hopefuls. Contestants, clothed in barely-there togas and accessorized with crowns of thorns and crucifixes, strut their stuff on a temporary stage in the park, after which a vote is cast and a new reigning Hunky Jesus is crowned.

Unsurprisingly, such an irreverent take on Christianity causes major uproar, and various Catholic and Christian groups have labeled it blasphemous and a mockery of their faith. But the group who organizes it insists that it is done in the spirit of humor, and that the contest is part of their mission to “promote universal joy and expiate stigmatic guilt”. The huge controversy also affords the group widespread public exposure in order to promote human rights and liberal issues within both the gay and mainstream communities.

Dubbed “the granddaddy of all leather events”, the Folsom Street Fair where you definitely don’t want to bring your kids along. In fact, even adults who are slightly faint of heart should probably avoid Folsom Street on the last Sunday each September.

Officially, it is a street celebration of adult San Francisco’s alternative communities. In reality, it is a fair where anything goes, and that really means anything, from nudity, to full S&M regalia, to a penchant for voyeurism. The organizers, Folsom Street Events, use the fair as a way to promote diversity within the leather/alternative lifestyle segment of the population, and the day includes music, entertainment, food, and drink. The event is an eye-opener to say the least and truly has to be seen to be believed.

Bring Your Own Big Wheel 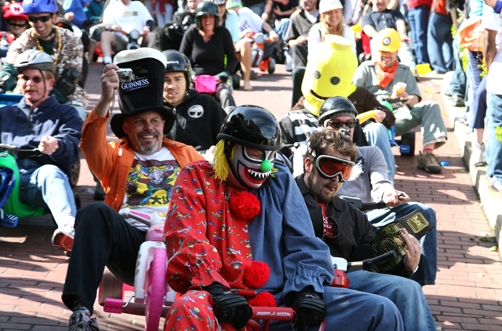 Is it daring? Yes. Is it fun? Supposedly. Is it legal? Of course not, but prizes like a pair of tighty-whities decorated with denim iron-on skid marks may entice you to enter. The Bring Your Own Big Wheel race was started nine years ago as a conceptual art event by artist Jon Brumit, who raced down the famously curvy Lombard Street on a kid’s tricycle. These days, the venue has moved to just as curvy Vermont Street in Potrero Hill, but this hasn’t seemed to deter the hundreds of participants eager to scrape and fall down the hill on their plastic vehicles.

The race is not sanctioned by the city due to the obvious risks, and the only rule is that your wheels need to be plastic. Bruni says that there really isn’t any good reason to do it, but this seems as good a reason as any for him and his fellow racers to return each year. Just keeping the bike intact from the full weight of an adult is an achievement in itself, so if you can make it to the bottom with at least half your bike still together, consider yourself a winner.

Explore the heart of the Mission District on this Secret Food Tour. Visit one of the best Taquerias in the nation and a traditional sandwich at an authentic Italian delicatessen. Just two of the many culinary delights on this tour. The tour also explores some of the best street art and murals in the city. Check out the tour details!

Like to keep it slightly different when you travel? Check out Weird Seattle: Best Tours and Festivals 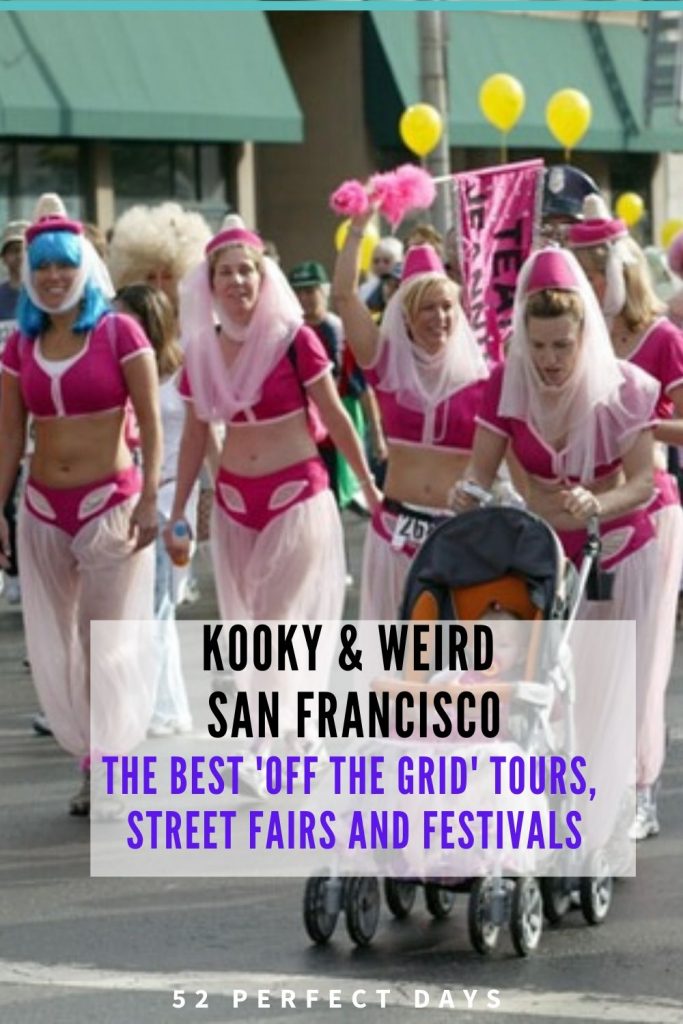