Before you even take off for the park, pack water and snacks. You’re in for an adventurous day, and lack of supplies will only make you hangry (hungry + angry, of course!)

Aim for an early start. Now, I’m not talking about sunrise along Crater Rim Drive (unless that is your idea of a fun morning!). Anytime before noon will be fine. When you drive in and pay your entrance fee ($10 for a weekly car pass), the park ranger will tell you about any volcano activity that may impact your visit.

One of the coolest parts about visiting Volcano is that you get a sense of how truly alive our earth is. Yes, the closures can be a bit disappointing. But our earth is growing and changing right in front of your eyes! A small price to pay, right?

To get a good background of the park, go to the visitor’s center. A twenty-minute video shown on a loop giving a good introduction to the park, along with an intriguing explanation of Pele, Hawaiian Goddess of Fire. Grab a map from the information desk and head back out to your car to head up to Jaggar Museum. Here you’ll get an up-close view of all the different kinds of lava, and also see the working seismographs measuring current volcano activity throughout the park.

Outside Jaggar, you’ll get a great view of the giant Halema`uma`u crater. It is massive. Take it in.

Because of road closures, visitors often have to turn around on Crater Rim Drive and go back toward the entrance. Pop-out when you hit the Steaming Bluff and watch the hot water flow up from the ground, and then continue on Crater Rim Drive, passing the park entrance. Head all the way around and turn right onto Chain of Craters Road. The rest stop about 9 miles down sits on the edge of the coast, looking down at the water. It can be windy, but the view is worth it. Unpack that awesome lunch you brought, grab a few lava rocks to weigh your sandwich bags down, and enjoy that view.

When you go back up Chain of Craters Road toward Crater Rim Drive, you’ll hit Devastation Trail right at the junction. It’s about a mile round trip, easy and flat. As the name implies, it’s dry and desolate, save for a sad, prickly tree or two. Don’t forget to drink some of that water you packed!

After you’ve seen Devastation, hit up the Thurston Lava Tube for a completely different environment. The giant lava tubes sit below a lush, green, cool forest with damp tree bark and flowers poking out of every crevice. The 1/3 mile loop ends with a walk through the lava tube – a fantastic natural creation leftover from a flow of lava that swept through several hundred years earlier. If you love this part as much as I did, you’ll want to walk the loop twice.

At this point, it might be nice to take a few hours away from the park. You’re running quite low on snacks at the point, and I know how much of a hazard that is. In the village of Volcano you’ll find a few restaurants. Thai Thai restaurant and the German-inspired Kilauea Lodge and Restaurant are particularly good choices for a nice meal in the area.

Once darkness falls, head back to the park and ask the ranger at the entrance if there is any lava visible that night. Oh, yes? Aren’t you lucky! Follow his instructions and join the crowd at the viewing spot. There really is nothing like seeing a hot pink glow spewing up from the ground. A fantastic end to a perfect day. 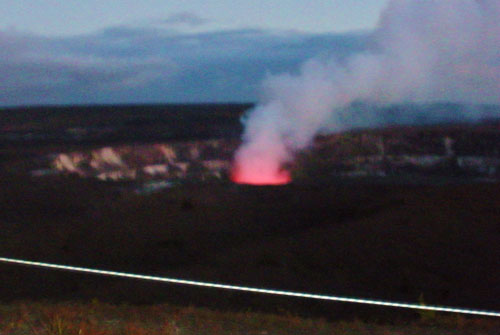 At any National Park, you’re sure to experience Mother Nature in all her glory. But her wild, unpredictable side is on full display only at Hawai’i Volcanoes National Park on the Big Island of Hawai’i.

As you tour the park, you’ll see her in all her extremes, ranging from verdant greenery to desolate wasteland, from high peaks to underground tunnels. On a whim, she may be quiet one moment, and then decide to vent her fury in a steam cloud or even a visible lava flow. You can’t predict what mood she’ll be in, but a visit to Hawai’i Volcanoes is certainly the way to experience Mother Nature as she truly is.

The perfect day at the park starts off early, at the Kilauea Visitor’s Center. There you’ll find many exhibits and several films about the Kilauea volcano and very helpful park rangers. To help guide you through your perfect day, the rangers can let you know if and where you can see lava flowing to the ocean and about possible closures due to recent eruptions or flows.

Next, drive along the eastern portion of Crater Rim Drive. At first, the scenery is lush and dense and trees mask the evidence you are on an active volcano. But then you’ll suddenly see the Kilauea Iki crater. In 1959, lava fountains a third of a mile high formed the large Pu’u Pua’i cinder cone in just a few weeks.

Continuing along Chain of Craters road, begin a 3700ft descent to the Pacific, but you’ll forget you’re on a tropical island. All you’ll notice are the lava fields, each labeled with a date, where previous flows have paved over the landscape. The repeated abuses have left the land desolate.

This is where you can personally experience the manifestations of Nature’s anger: pahoehoe, the smooth type of lava; and a’a, the jagged type.

Past mile marker 16 is a short hike to the Pu’u Loa petroglyphs. Among these 15,000 ancient carvings in the lava, hundreds of years old, you’ll recognize turtles and people. There are also hundreds of puka (holes) in the lava, in which ancient Hawaiians buried umbilical cords in a sacred ritual to honor Pele, the goddess of the volcano, and to ask her to protect their newborns.

At the end of Chain of Craters road, where the lava confronts the sea, you are rewarded with a magnificent view of the Holei Sea Arch, formed as the constant ocean waves pound and erode at the base of lava flows. The 90 foot-high cliffs offer especially dramatic views.

Plan to have lunch in the lovely town of Volcano. On your return, drive west along Highway 11, two miles past the Park entrance, to the little gem of Kipukapuaulu. A one-mile loop hike takes you around a lava island, untouched by the lava rivers that decimated the rest of the area.

Nearby are several tree molds where lava was temporarily halted by large, mature trees. The coolness of these trees made the lava solidify into hard shells around their trunks. Lava flowed around the shells as the trees slowly burned. Where forests once stood now there are only holes in the lava, as deep as the lava flow was. The lava islands, on higher ground, were spared this fate. The abundance of rare plants and wildlife in these little oases contrasts with the empty rock around them.
In the heat of the afternoon, a visit to Thurston lava tube is a must, especially for kids. Explore the lighted

version of the tube or, for a true cave-like experience, venture into the unlit portion with your own flashlight. You will walk on the floor of a tunnel formed by flowing lava hundreds of years ago. The lava hardened where it met air, forming the shell of a pipe. Lava inside continued to flow, eventually to the ocean. And while you’re exploring, Mother Nature will be busy making more lava tubes just like this one, just a few miles away.

The best part of a day at the Park is an evening visit to the Jaggar Museum, perched on the rim of the Kilauea caldera, an impressive 2 miles across and 400ft deep. The museum offers many educational displays about the volcano, including samples of Pele’s hair (strands of volcanic glass) and Pele’s tears (formed when molten lava droplets solidify in midair) formed during eruptions. The museum also overlooks the active crater within the caldera, Halema’uma’u, home of Pele. The massive, never-ending plume of steam pouring out of the crater is awe-inspiring during the day; but at night it becomes mesmerizingly beautiful. As the sun sets, you’ll see the white steam turn to orange as it reflects the glow of a lava lake whose surface is 100 feet below the lip of Halema’uma’u. This light show is a breathtaking surprise.

While marveling at the fury boiling just below the surface, look up at the starry southern sky for a glimpse of Nature’s calmer beauty. At this southernmost National Park it is possible at times to see the Southern Cross or Alpha Centauri, visible nowhere else in the United States. The dark sky unexpectedly greets you with thousands of stars and the Milky Way.

Mother Nature is wild and unpredictable. You can experience her true nature at Hawaii Volcanoes National Park, home to the 4000ft Kilauea Volcano. You’ll see lush tropical vegetation amid a desolate wasteland of lava. You can visit ancient lava flows and petroglyphs carved into them, just as new lava tubes and land are being created within the park. You can stand above an active caldera, and then hike into an underground lava tube. Here, you can experience the intensity of the molten lava beneath your feet, waiting to explode onto the surface, while gazing at a peaceful sky. Where the lava will flow next is unpredictable, but Hawai’i Volcanoes National Park is definitely where you will see Mother Nature in all her extremes.

Julie Turner is a web editor and writer living in Brooklyn with her husband. Her personal writing can be found at fresh-basil.blogspot.com.