The El Paso Mission Trail is a nine-mile piece of El Camino Real de Tierra Adentro; the road stretching from Mexico City to Santa Fe. To this day it remains the oldest (and formerly the longest) trail in North America. It spans a distance of more than 1,500 miles. Visitors can travel along the El Paso Mission Trail to visit Mission Ysleta, Mission Socorro, Presidio Chapel of San Elizario, and the first mission built on the trail, Mision de Guadalupe.

Ysleta, Socorro, Presidio Chapel of San Elizario, and Mision de Guadalupe are four of the sixteen missions along the El Camino Real de Tierra Adentro. These four were all on the south bank of the Rio Grande until 1829 when floodwaters cut a new channel and altered the border so that today, only Mision de Guadalupe remains in Mexico and the others are now found in modern-day Texas.

The mission trail was founded in 1598 by Governor Don Juan de Oñate, and was the first mission trail in America. Oñate led a caravan of 500 colonists along with 12 Franciscan missionaries on an expedition to settle a new province. The colonists traveled for weeks over miles of Chihuahuan desert before finally reaching the south banks of the Rio Grande, near what would become San Elizario.

In celebration of reaching their destination, Oñate ordered a day of rest. The Spanish colonists held a Mass and feasted with the local Manso Indians, marking the first Thanksgiving dinner (23 years prior to the Pilgrims’ feast in Plymouth, Massachusetts).

During this celebration, Oñate performed “La Toma,” the ceremony marking King Phillip’s taking possession of the land. It was along this route that Franciscan missionaries built the missions at Ysleta, Socorro, Presidio Chapel of San Elizario, and Mision de Guadalupe. 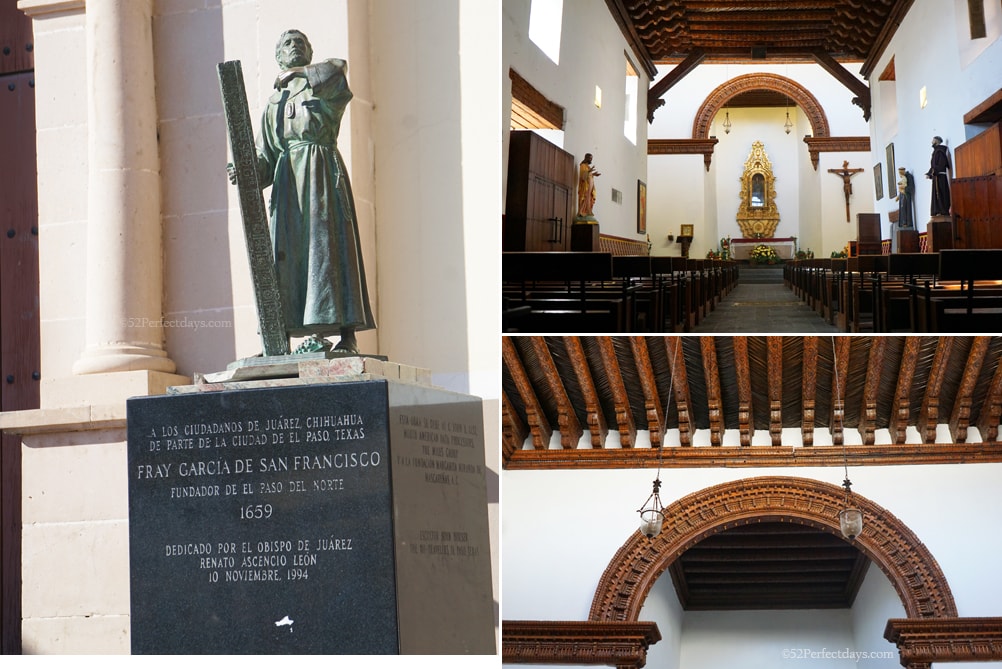 Mision de Guadalupe was the first building erected in El Paso del Norte, now known as Juarez, and served as the model for the rest of the missions constructed on the trail including Las Cruces and El Paso. In 1659, when the mission was built, it was located on the other side of the Rio Grande.

Mision de Guadalupe was founded by Fray Garcia de San Francisco as part of a larger effort to convert the local Manso and Suma Indians who had lived, hunted, and farmed on the land for years before colonization. Mision de Guadalupe was known as the mother church for El Paso, and by 1680 had served over 2,000 native people who had been driven from their homes by war, starvation, and disease. 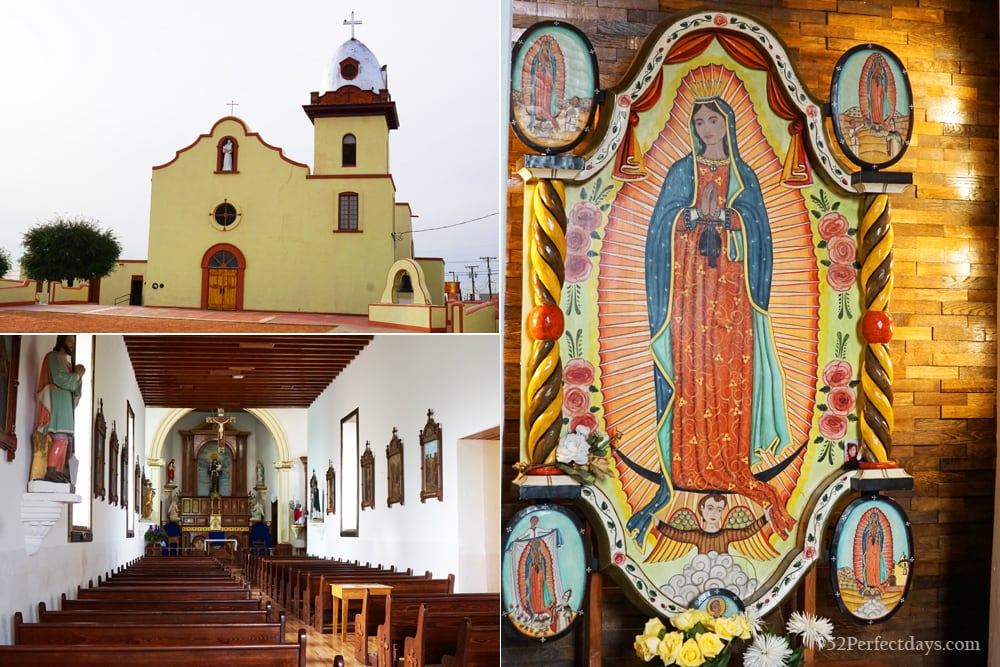 Many of the displaced indigenous people fled to start new communities along the Rio Grande after the 1680 Pueblo Revolt, which was the largest Indian revolt in the history of the Americas. One such community was Ysleta. Ysleta is a community in El Paso and was settled in 1680, when Spanish conquistadors, Franciscan clerics and Tigua Indians took refuge along the southern bank of the Rio Grande.

Ysleta is the first mission and Pueblo built in Texas. The first permanent mission was established by the Tiguas in 1692 and was named for their patron saint, San Antonio. It is the oldest mission in Texas.

San Antonio Mission was destroyed by a flood in 1740, and after being rebuilt was destroyed by yet another flood in 1829. The current Mission Ysleta opened in 1851, and has withstood fires and numerous renovations since then. The Tiguas continue to celebrate San Antonio on his feast day at Mission Ysleta with traditional dances and a morning mass. 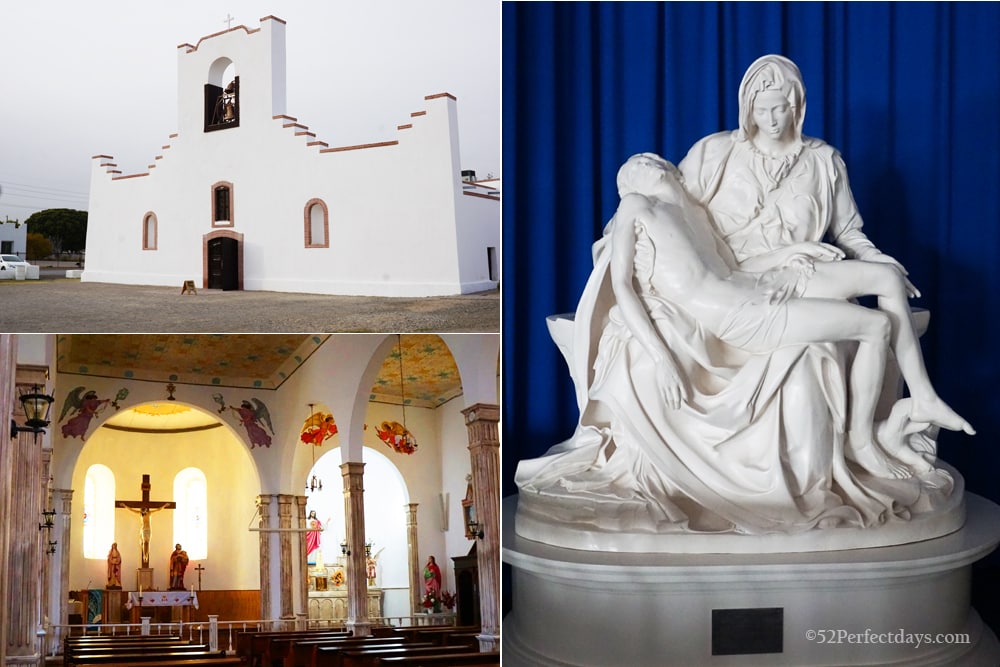 Similarly to Ysleta, Socorro mission was founded by Spanish and Indian refugees fleeing after the Pueblo Revolt. The mission itself was completed in 1691 and named Nuestra Señora de Limpia Concepcíon de los Piros de Socorro Del Sur. Today it is known by parishioners as San Miguel, after their patron saint.

The original structure was destroyed by a flood in 1740, but oral histories describe decorative beams made out of cottonwood and cypress as well as a bell with elaborate art combining Spanish-style architecture with elements of Indian visuals found throughout the region. Some of these beams were salvaged and used to rebuild the mission in 1843, making them the oldest original relics in Texas.

In addition to its original beams, the Socorro Mission contains a replica of Michaelangelo’s sculpture, “La Pieta.” It was sanctioned by the Vatican and donated to the mission in 2015. It depicts the Virgin Mary cradling the body of Jesus after the Crucifixion. The donation of “La Pieta” has revitalized tourism in the area, drawing crowds of newcomers to see a replica of the only work Michaelangelo ever signed. 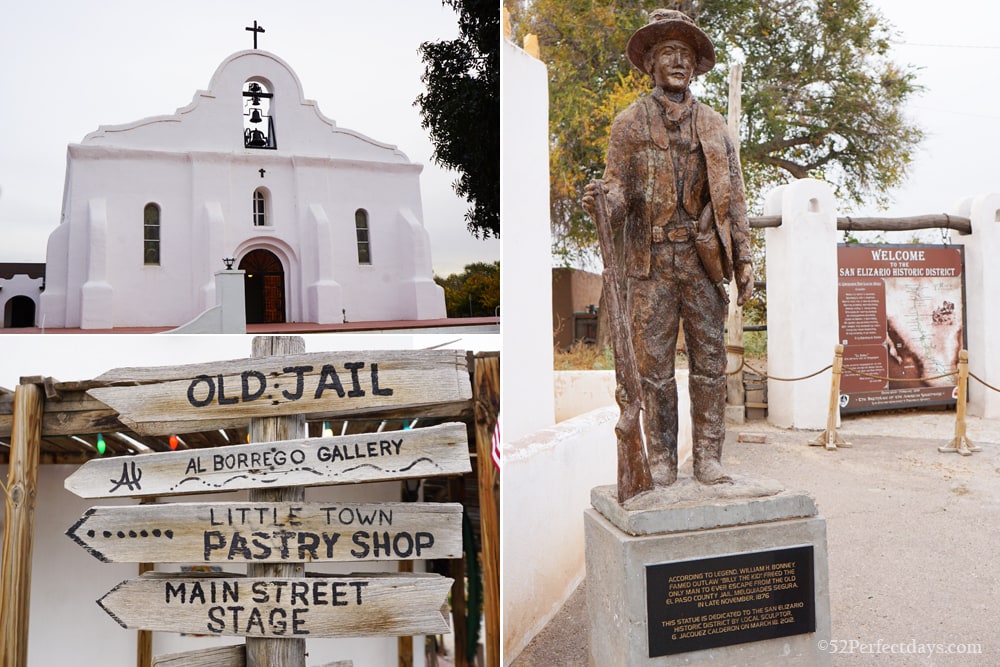 As the Spanish continued to push north, they established presidios (military forts) in order to protect their assets. One such presidio was built in 1789, and named San Elcear after the French patron saint of soldiers. The community that grew around it became known as San Elizario, and a chapel was established within to serve the soldiers and their families. After a flood destroyed the original structure, the present-day chapel was rebuilt in 1882 and its exterior has remained intact as an example of the ways in which European architectural styles blended with the box-like adobe missions of the time.

The community of San Elizario continued to grow and prosper, and in 1850 San Elizario became the first county seat of El Paso. The San Elizario Jail earned acclaim as the only jail Billy the Kid ever broke into. Visitors today can see the jail where the notorious outlaw freed his friend and imprisoned the guards before making his escape to Mexico.

Visiting the Mission Trail in El Paso: Mission Ysleta, Mission Socorro, Presidio Chapel of San Elizario can be found on a 9-mile route along Socorro Road in El Paso.

Visiting Mision de Guadalupe in Juarez: Juarez is just across the border from El Paso, Texas and once you cross the border, it’s only two miles to the mission.

A huge thank you to Visit El Paso for their generous hospitality. I enjoyed this visit as a professional blogger, but as always, all opinions my own.