Two Days in the Corinthian Riviera Villages of Dorida, Greece 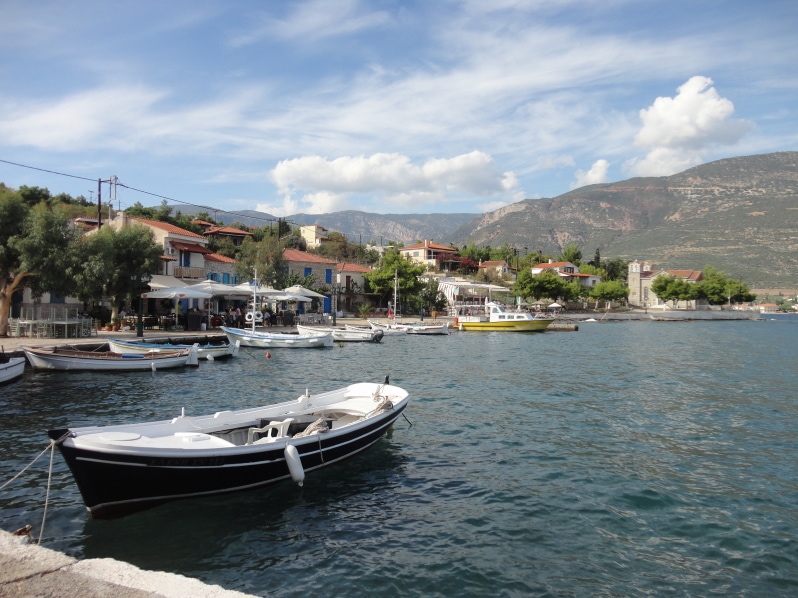 Ringed by small to mid-size villages and cities, the Corinthian Riviera, is the Greece that’s missed by most visitors. Although Greece has more mountains than Switzerland, most people think of it as a seaside destination with miles of coastline hugging the mainland and islands. Fortunately, a trip to Dorida, Greece in the Corinthian Gulf region offers both seaside and mountainous terrain. In the municipality of Dorida, you can experience both types of landscape during a two-day driving tour. 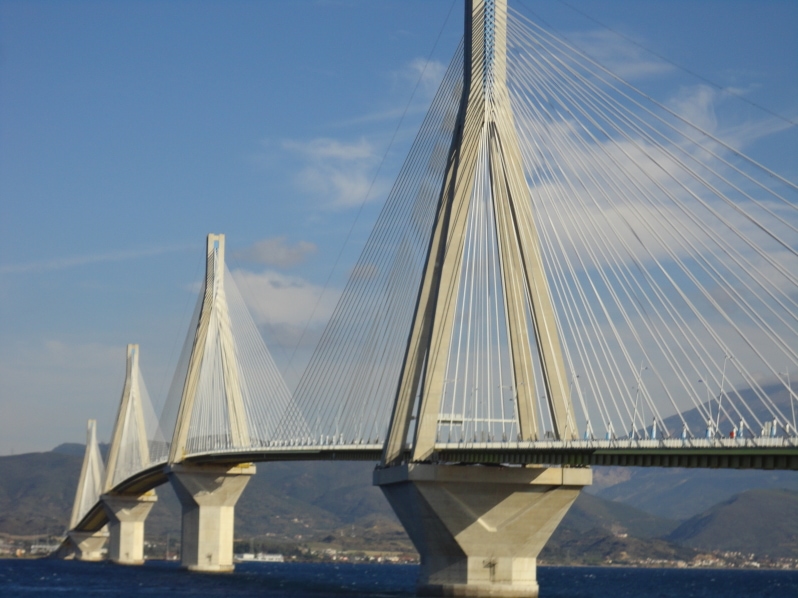 Connecting the southern and northern shores of the gulf, the Rio-Antirrio bridge is the longest suspension bridge in Europe. However, we used the more traditional Greek method of boarding a ferry and landing on the gulf’s north shore where we started our tour on sheep-lined Dorida highways.

Our first stop was in Efpalio, a little village of red-tiled roofs set among green hills. Although tourism is increasing and there are many small, family-run accommodations, the economy of this region is based primarily on agriculture and livestock.

A tour of the local Folklore Museum drove home the point of Dorida’s farming roots with artifacts representing an era dating from approximately 200 years ago up to more recent times. There was a donkey saddle, hand-embroidered fabrics, a butter churn and a hand-tightened press to form hay bales.

A World War II diary describing “bathing in lice while defending the mother country” and newspaper clippings about liberation left no doubt that times were hard. 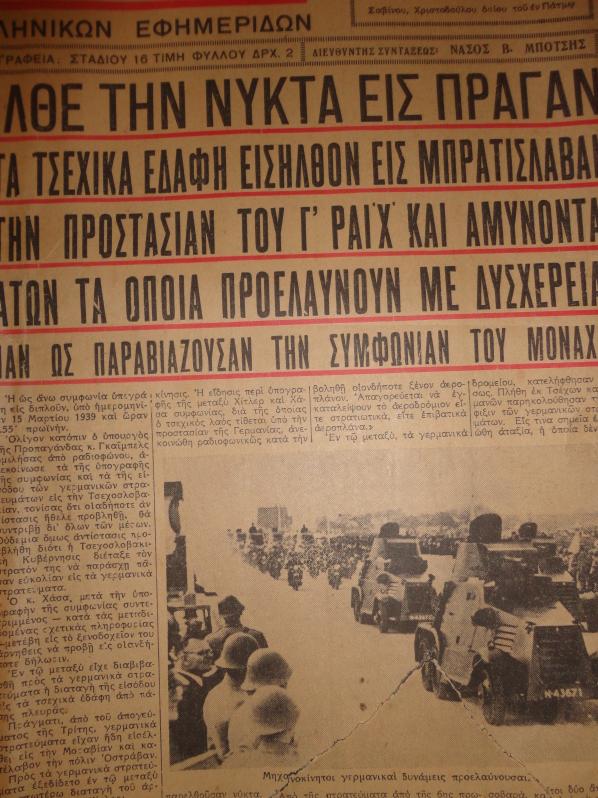 We left Efpalio and climbed the hillsides, gaining ever more commanding views of the gulf around each hairpin turn. Soon we arrived at three black, steel doors where Sister Monica greeted us and led us past a chorus of singing parakeets into the Monastery of Trikorfo.  Recorded human chants set a less cheerful scene as we walked through an underground maze designed to replicate the features of actual Greek catacombs where early Christians conducted their secret religious ceremonies away from the persecution of Roman soldiers. 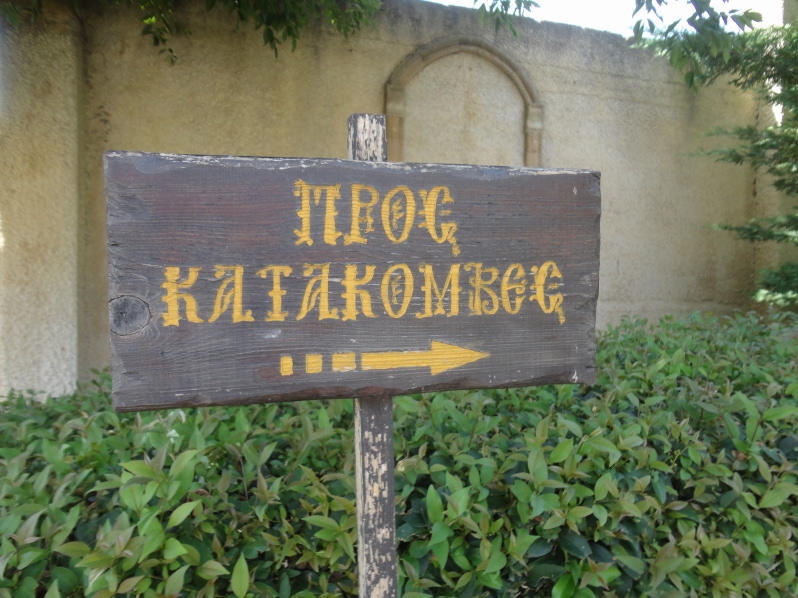 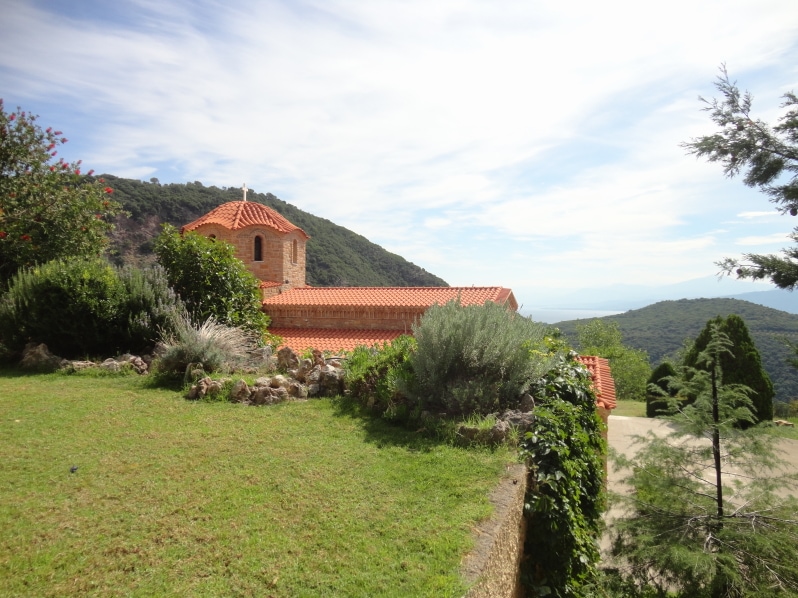 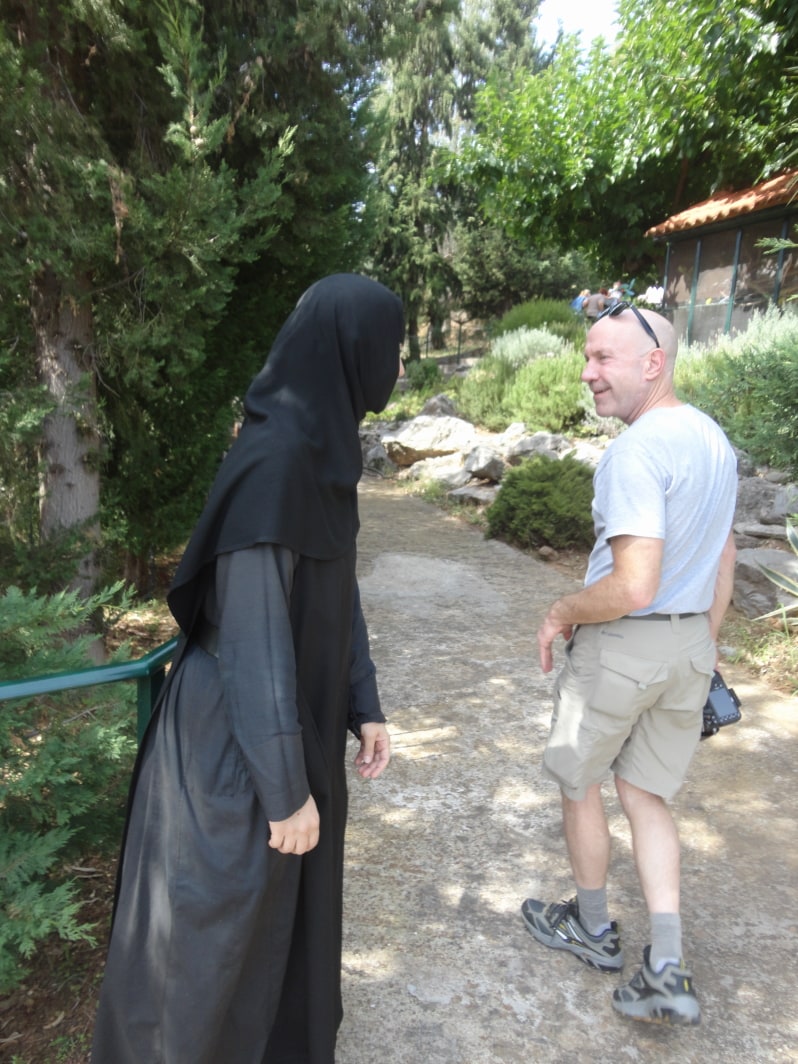 A couple of short miles further up the mountain lay the male counterpart of the monastery. Still a young man in his thirties, Father Nektarios had his religious calling as a teenager in Detroit. Speaking with an American accent, the son of a Greek father and American mother led us around the monastery grounds.

He paused at a small outdoor shrine built to honor Saint Seraphim whose image reportedly appeared on three different occasions to kids attending summer camp at the monastery in 1991, 1992 and 1993.  We ended our tour at the bell tower in time to hear 62 bells playing a song that increased in intensity until it reached a deafening volume. 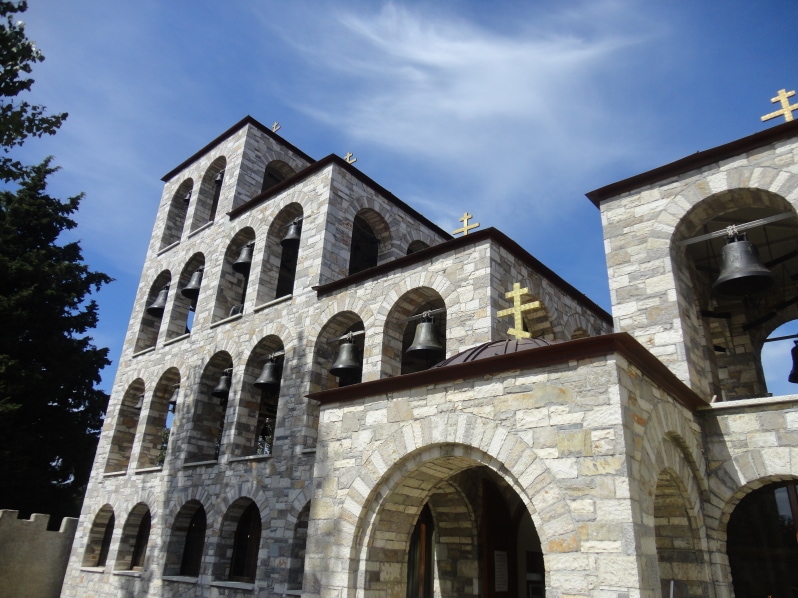 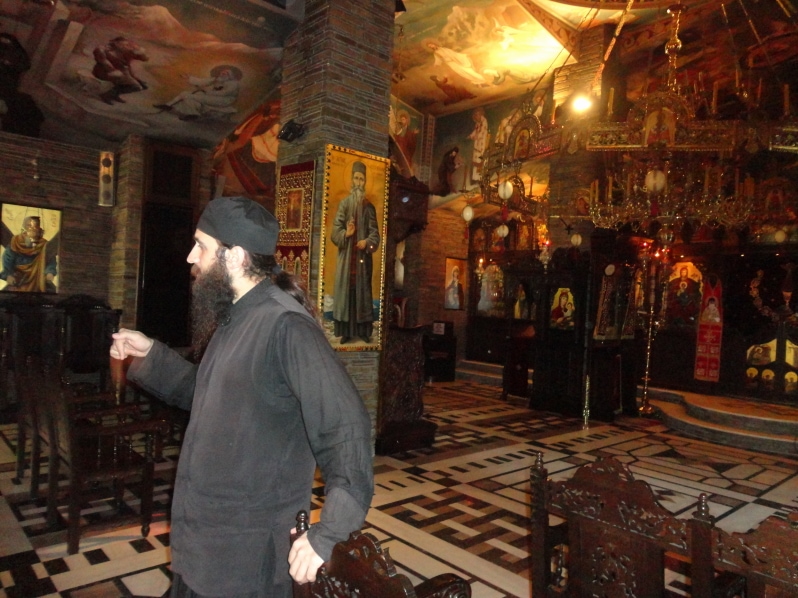 Back down at sea level, we strolled around picture-perfect Trizonia, the only inhabited island in the Corinthian Gulf. Once used to isolate people condemned for serious crimes, the island had anything but a punitive character. In fact, the story goes that Greek shipping magnate Aristotle Onassis ate in the little village cafes and liked the island so much that he offered to buy it from its fifty local residents. They declined his offer.

As the warm autumn sun beat on my skin and the sea spray hit me on the transport boat’s short hop back to the mainland, I looked at the island and thought without a doubt that they made the right decision. 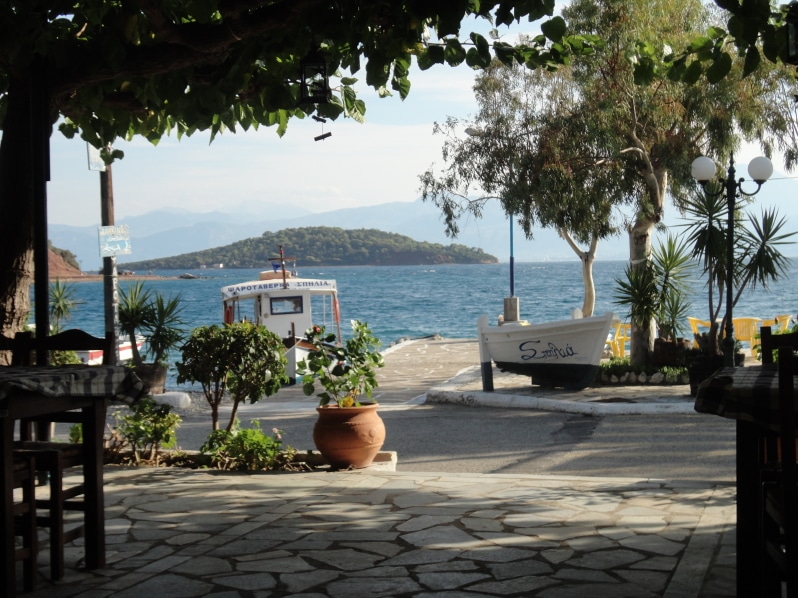 A late lunch at Spilia Restaurant consisted of the sea’s bounty and local specialties: mussels, prawns, octopus, cheese pie and sinagrida fish. We checked into Elia Suites, an ultramodern facility with small, separate houses for each guest. 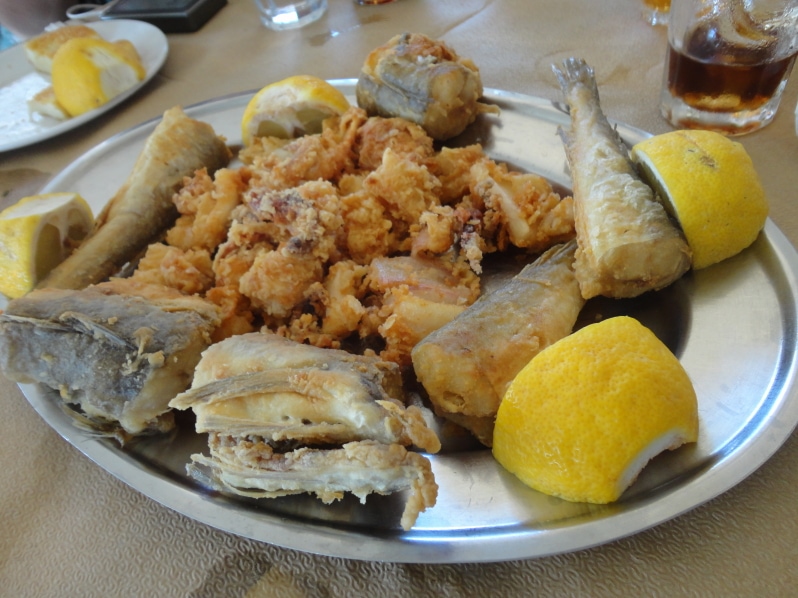 I caught some much-needed rest before we headed back out to another seaside village, Eratini and strolled through its outdoor night bazaar selling everything from dolls to decorative toilet seats. Our evening dinner at Katina Restaurant lasted well past midnight, not unusual in the Mediterranean.

Named for Katina, the establishment’s grandmother, or “yiayia” in Greek, the outdoor tavern’s matriarch offers abundant smooches at the conclusion of its traditional family dishes. 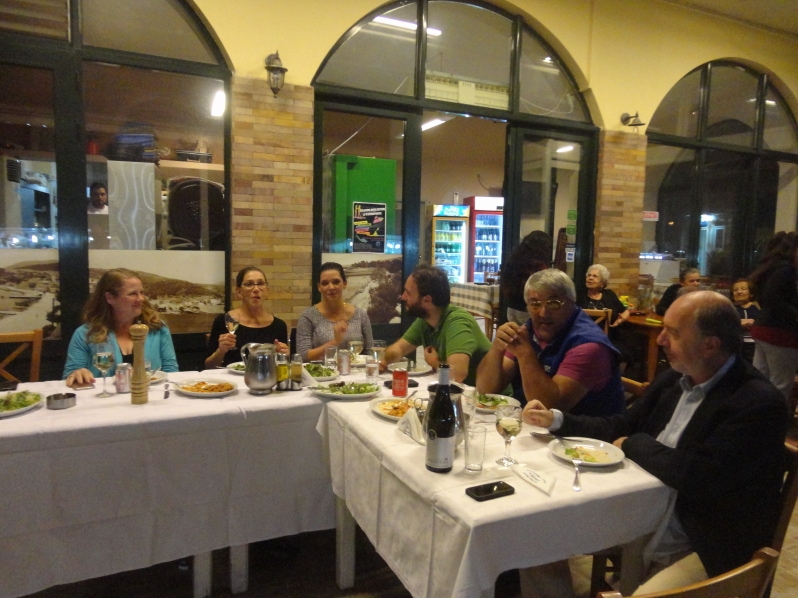 Horizontal sunbeams streamed through lacy olive branches the next morning as our bus hugged the coast and climbed the rolling terrain. In short order, we arrived in Galaxidi, a seaside village extending up a hill that offered its early residents’ clear vantage points to watch for pirates.

Once the site of a shipbuilding industry, the village preserves many aspects of its nautical history among its narrow streets and stuccoed houses. The local history museum holds many artifacts including the priceless paintings of ships.

Before the days of photography, a vessel’s owner usually commissioned a highly detailed painting much like a wealthy family would commission portraits of its members. 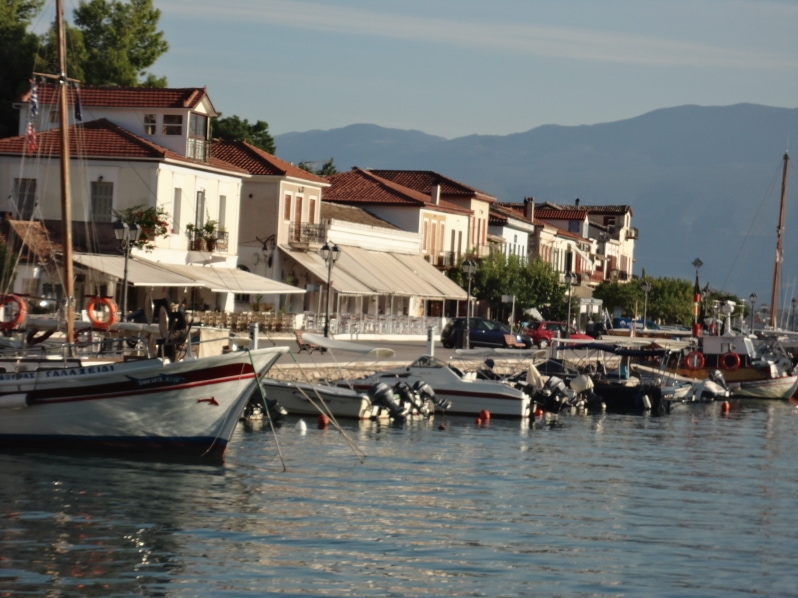 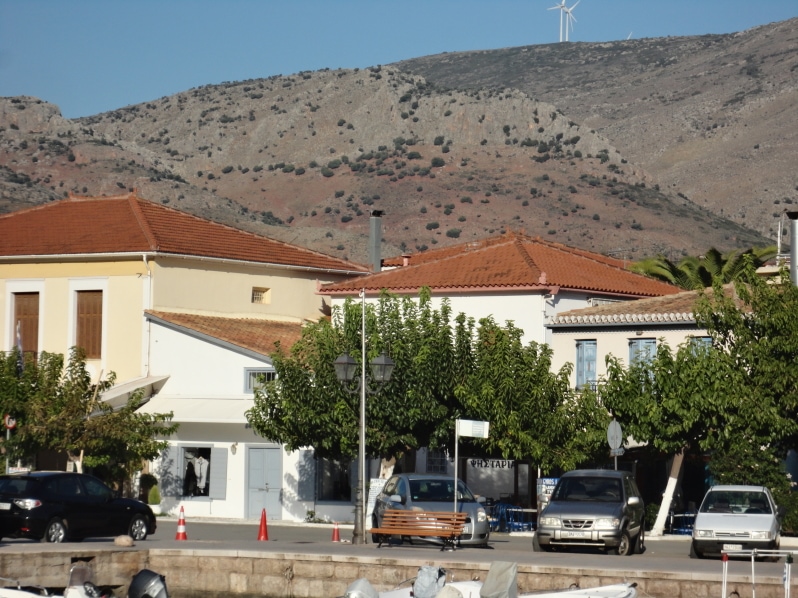 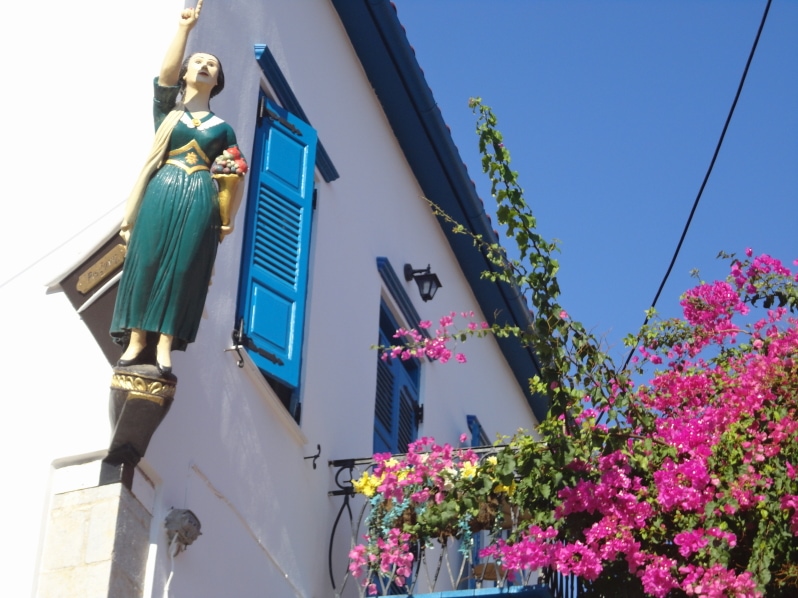 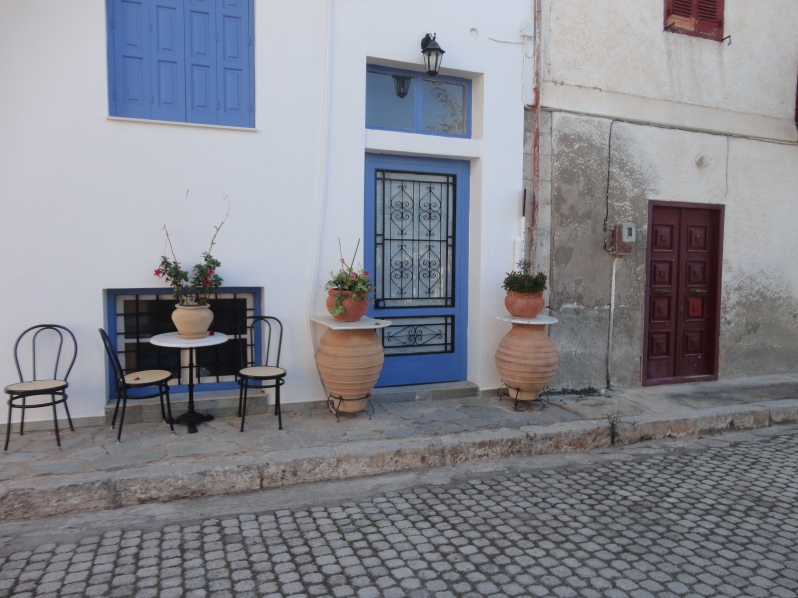 Our tour bus then climbed higher through hills of dry grass and olive trees until we reached the Mellin organic honey farm at an elevation of approximately 1800 feet.  The beekeeper owners explained the fascinating process of taking some bees to pollinate thyme plants at sea level and leaving others to pollinate the fir trees at the higher elevations.

The compounds that derive in the bees’ bellies differ depending on the pollen source and we got to sample the tasty results of all the bees’ work. There were subtle but distinct differences in taste among the honey stocks obtained from the different sources. 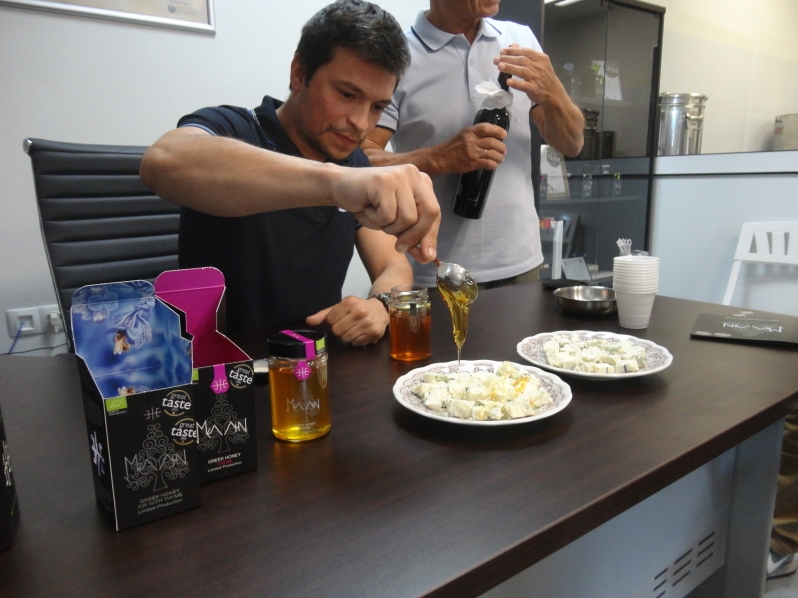 Next, our driver whisked us to a goat and sheep farm run by the Koutsoubas brothers who explained their organic farming methods and treated us to an assortment of feta cheese, yogurt and rice pudding. 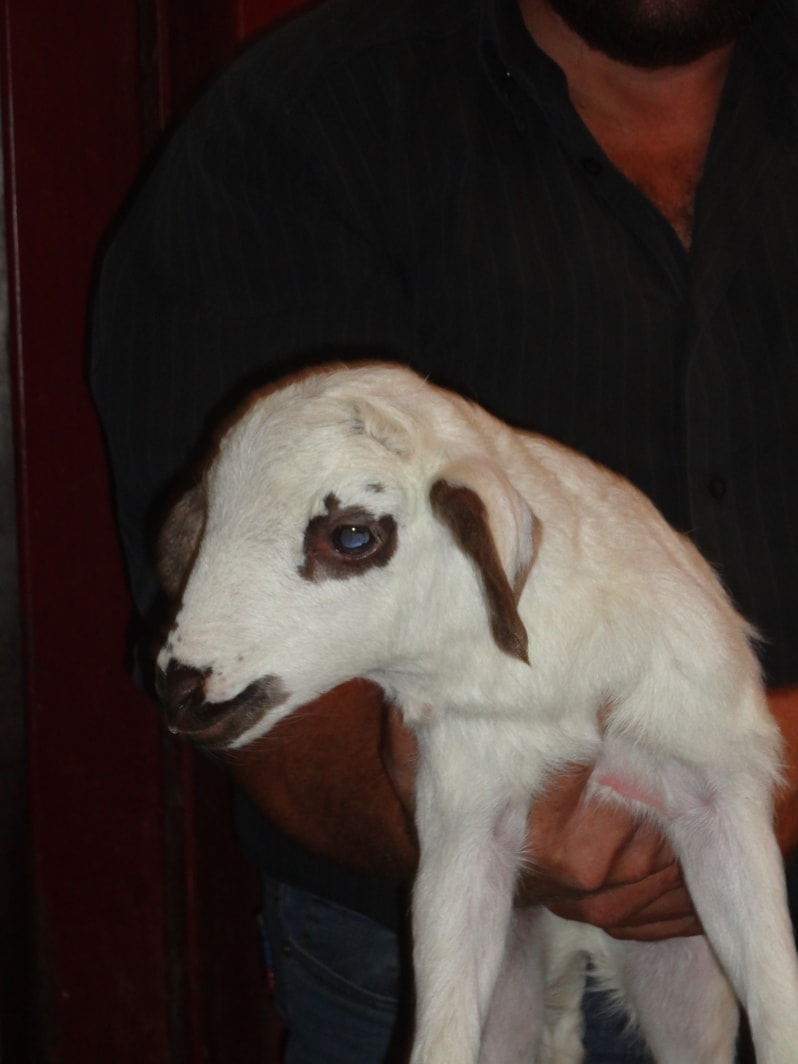 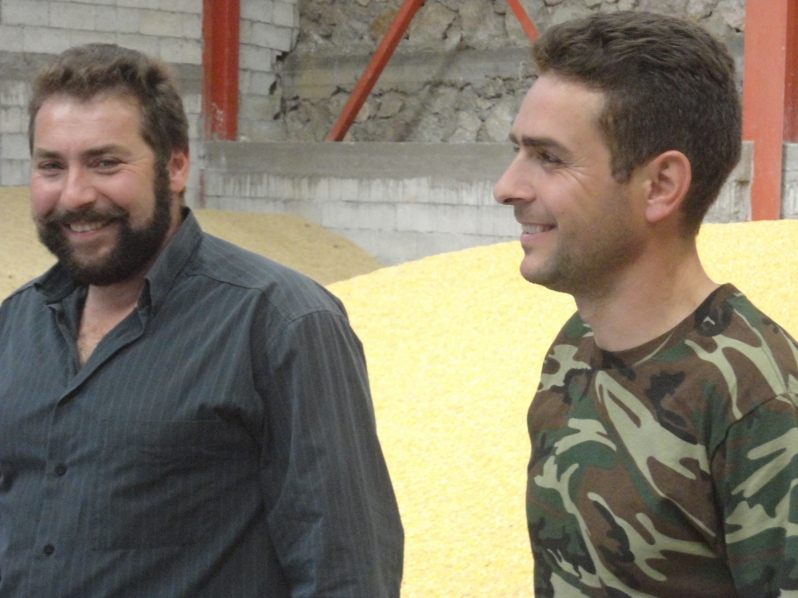 Our full day came to a pleasant end high in the mountains at the family-run Hotel Kallipolis in Loidoriki. Although a Greek salad and cheese pie are universal throughout all the locations we visited, our lunch at the hotel and dinner in nearby Malandrino were more meat-based than meals at the seaside taverns.

I savored a delicious goat-meat broth, tender roasted lamb and olive oil fried potatoes, while my more adventurous friends also ate dishes prepared from organ meats. Whatever your meal preferences, there’s no doubt that a tour through Dorida, Greece will give you a taste of the Corinthian Riveria, at both seaside and mountain level. 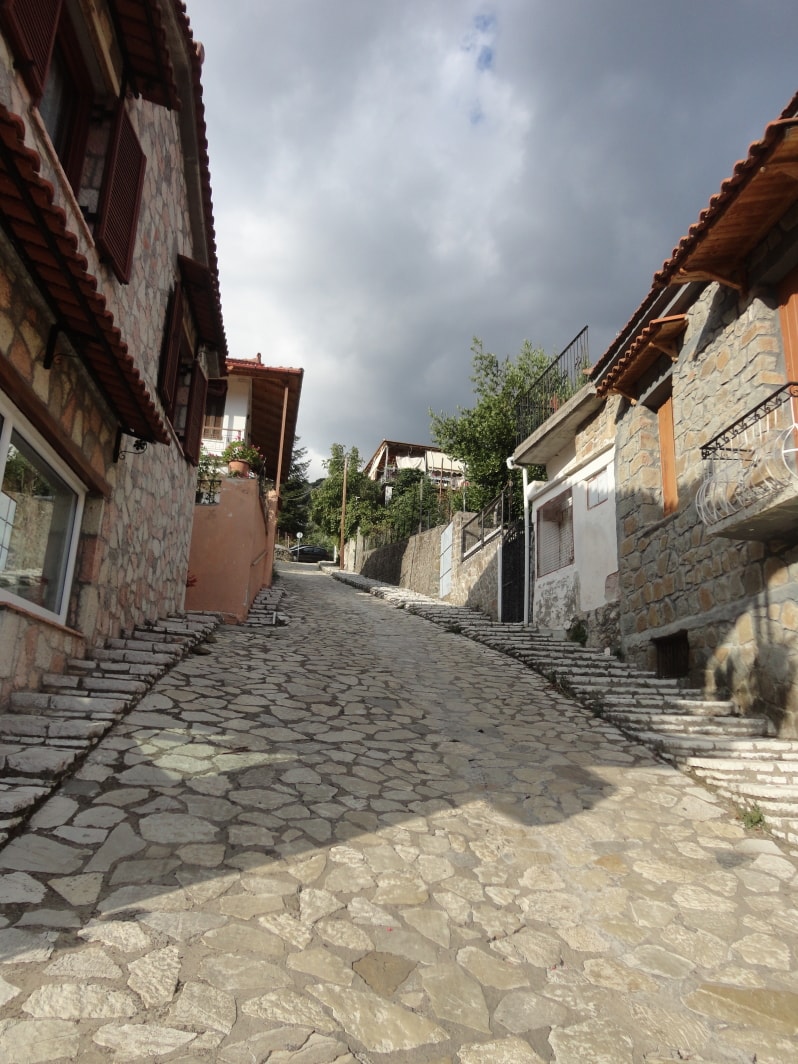 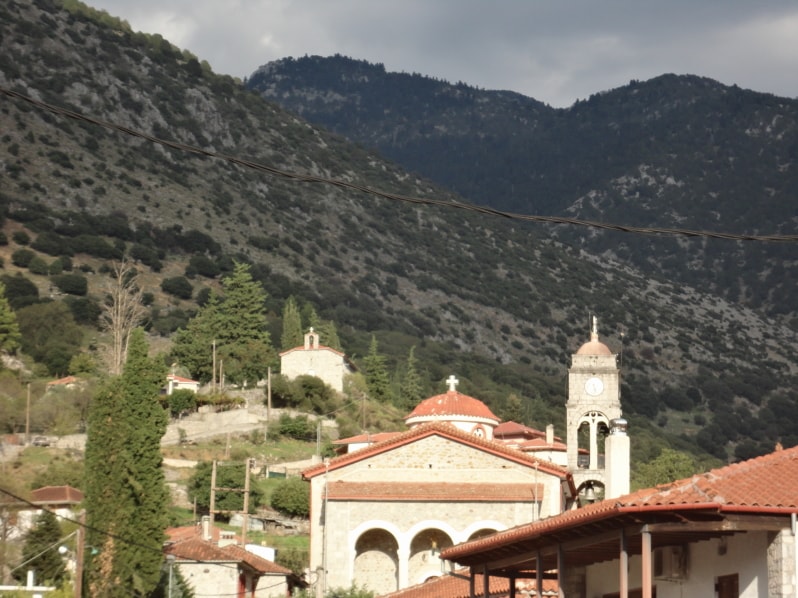 For further information on the individual establishments listed in the text, click on the provided links.  For information on arranging a guided motor tour in the Dorida, Greece region of the Corinthian Riviera, contact:

Indispensable Items to Pack for a Greek Vacation

52 Reasons to Visit Macedonia and Insider Travel Tips
Learning Greek History by Eating: One Perfect Day in Athens
Off The Beaten Track Travel in Central, Eastern and Southeastern Europe 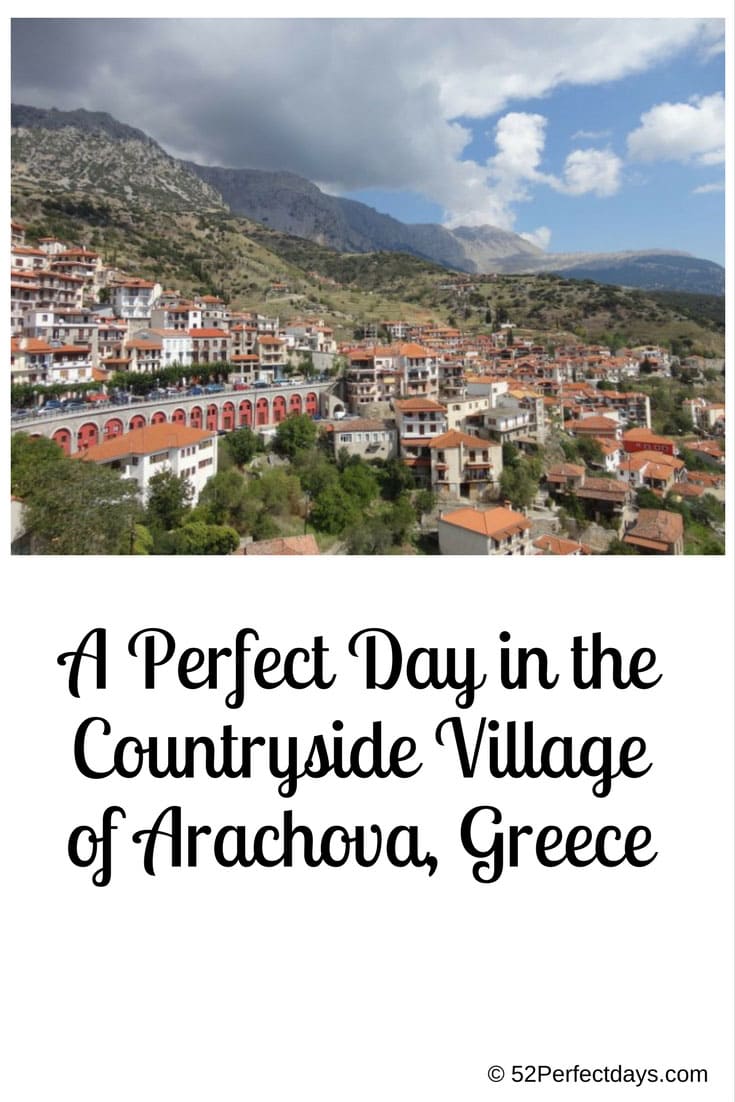 About the Author David Lee Drotar