Cancun is so new that it seems almost artificial. It’s an island jutting into the Caribbean Sea, off the east coast of Mexico’s Yucatan Peninsula. According to Wikipedia “When the development was started on Jan. 23, 1970, Isla Cancún had only three residents, caretakers of the coconut plantation of Don José de Jesús Lima, who lived on Isla Mujeres, and there were only 117 people living in nearby Puerto Juárez, a fishing village and military base.”

Today the population is over a half million, so you can imagine the rate of change there and the look of the place which is amazingly new and stunningly clean, particularly by the standards of older Mexican resort towns like Acapulco. 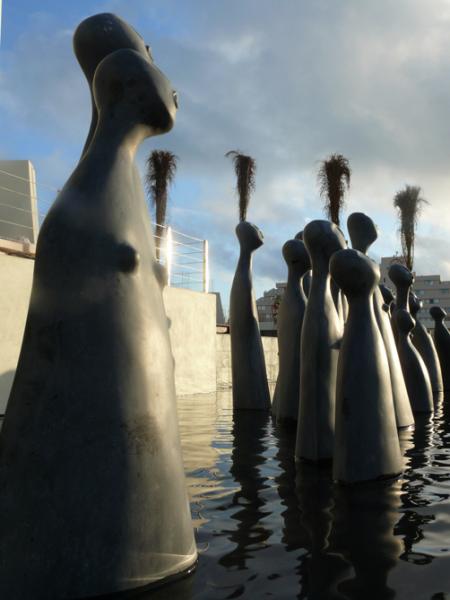 This is a city that was targeted by the Mexican Federal Government to become a resort and it has done so with astonishing energy. There are chain restaurants and everyone from Bubba Gump to Jimmy Buffet seems to have one. Cancun has an extensive, impressive hotel row and The Ritz Carleton, Marriott, Melia and others have at least one location, some more.

ME Cabo Hotel by Melia

This day begins with breakfast in bed at the ME by Melia hotel, an unquestioned treat. The hotel is situated on a stunning spit of land on Cancun’s Kukulcan Boulevard. Melia, the parent of the hotel has moved into new territory with the ME.

It aims at the younger traveler, someone between the 25-45-year-old age range. The atmosphere is low key and quiet. There is a full spa with a variety of massages, facials, and health treatments, and three restaurants. Then, of course, there’s room service and having a substantial breakfast is something easily accomplished from the hotel’s full menu.

Afterward, catch the 7:30 a.m. departure for the bus to Chichen Itza, the capital of the Mayan empire. It’s a long bus ride, 3 hours, but well worth the trip. The Mayans are mysterious, no one knows their story fully. They simply arose in Mexico around 700 AD, built a civilization, complete with stone pyramids, and then disappeared around 1000 AD.

Chitzen Itza was found in the early 19th century by an English diplomat and bought, whole. The 1800s were a time when historic preservation was unknown. Some of the structures were dismantled so that stones could be used in the construction of churches and other buildings. But what remains and the efforts to preserve and reconstruct the structures have been largely successful. You can no longer climb the pyramid, but the place is a wonder, complete with a well that gave the city its name.

Chitzen Itza means “At the mouth of the well of Itza” The fact the culture included human sacrifice is evident, as some of the bones found there have revealed. The buildings were formerly used as temples, palaces, stages, markets, baths, and ball courts. It’s a small town center, from a thousand years ago and you’ll be glad you made the journey.

Once, you return to Cancun, you’ll need to revive and one of the best ways to achieve that is a massage at the ME hotel spa. The ME’s YHI spa is sublime, a haven where you can unwind. The Spa itself is immaculate, chic and upon arrival one is met by a butler or a maid who leads weary clients from the spa’s lobby to the chamber where the magic is made. I had a deep tissue massage. My masseuse, Laura, seemed to find all the kinks and to work at them until they were distant memories.

There is one stylistic touch that is employed there which sets this hotel apart from any other hotel I have stayed. When the guest meets anyone, your spa butler or maid, a person behind the front desk, a waiter, a member of the cleaning staff one is saluted. This is not a military salute, but a gesture where the staffer touches their heart when addressing a guest.

It’s curious, at once a visual gesture of “coming from the heart” and a sign of respect. For me, it was weird to be saluted, at first startling, then it was just peculiar. However that may be, it does differentiate the hotel and declare its uniqueness.

After a salute upon my departure from the spa, I walked to my room. Then, after a short nap, refreshed and revived, I went for a swim in the infinity pool, I was ready for a meal and the Silk Restaurant was perfect.

At the grill the chef, Juan, disassembled and diced a lobster and cooked it before my wondrous eyes. He is a master and having been trained at Benihana, he not only cooks well, he does it with an almost military style, complete with flourishes!

Finally, after a fabulous meal, I wandered off to bed. It was a great day, a wonderful, unforgettable archaeological experience, a comfortable room, a massage and great meal. It was enough and I was delighted by seeing Cancun and Chichen Itza and the ME was utterly fabulous. I’d go back in a heart beat.

Richard Basch is a writer, photographer, and TV producer living in Venice, CA. He spent the last year teaching film history at Chapman University's Dodge College while travelling around Mexico and writing stories for a variety of publications. He has written for "The Washington Times", NPR's "The Savvy Traveler", "Modern Maturity", "The Arizona Star".

He is currently producing a TV documentary on Herman Mankiewicz, the writer of "Citizen Kane" and doing assignment photography in Southern California and elsewhere.